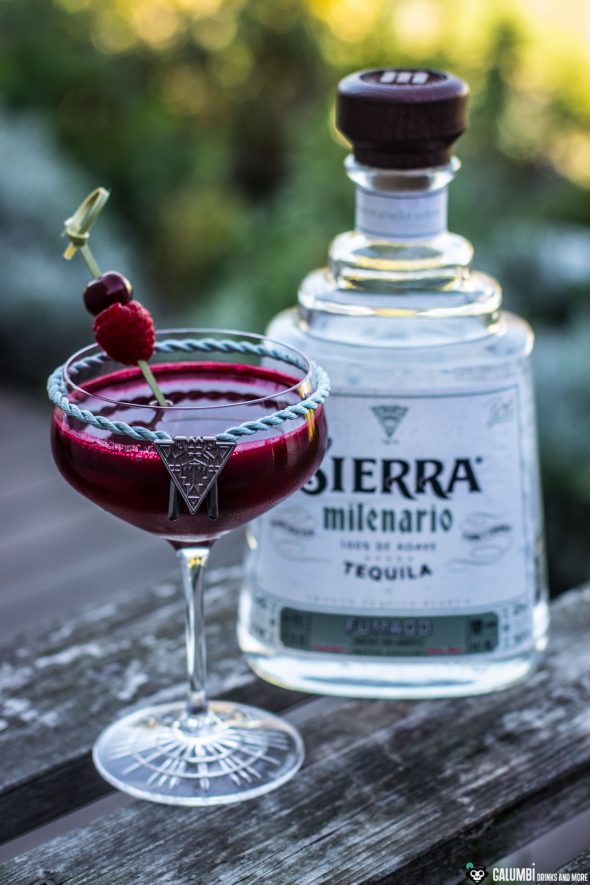 Even though there are many different changes, which the bar world has undergone during the last few years, one of them is certainly the rise of the Mexican spirits Tequila and Mezcal. Admittedly, the reality in Germany and most other European countries is far from being the same as in the USA and it is also far behind the ever-present prophecies predicting both spirits a shining bright future, but at least the name Mezcal has become known to more and more people. (provided test product)*

This is indeed still a very young phenomenon, because only five years ago hardly anyone in my surrounding who is not into the cocktail thing would have known anything about this word. Although everyone knew at least one Mezcal and had already drunk it. Because this Mezcal was in the end nothing else than a Tequila. The fact that Tequila is a Mezcal, but not every Mezcal is a Tequila, probably belongs to the classical basics, which one gets to hear or read as soon as a little more research is done about the matter. But as I don’t want to work through all the basics here again, I would like to refer to my article about the Miel de Tierra Mezcals, in which I outlined the basics of the Mezcal production, as well as to my article about the Casa Noble Reposado, in which it is about Tequila in particular.

The Tequila I was talking about (the one everybody knew) was the infamous Sierra Silver Tequila (or alternatively the golden one). However, many people around me had – if at all – a kind of love-hate relationship to this one. Hardly anyone really liked to drink it, it was first and foremost the drollery with lemon, salt and co that made people want to have it – a party ritual that brought at least funny screwed up faces with it. In any case, the name Sierra does not stand for quality premium spirits in the perception of the masses. This is probably the dark side of the overwhelming market dominance, which the brand has in the tequila segment. 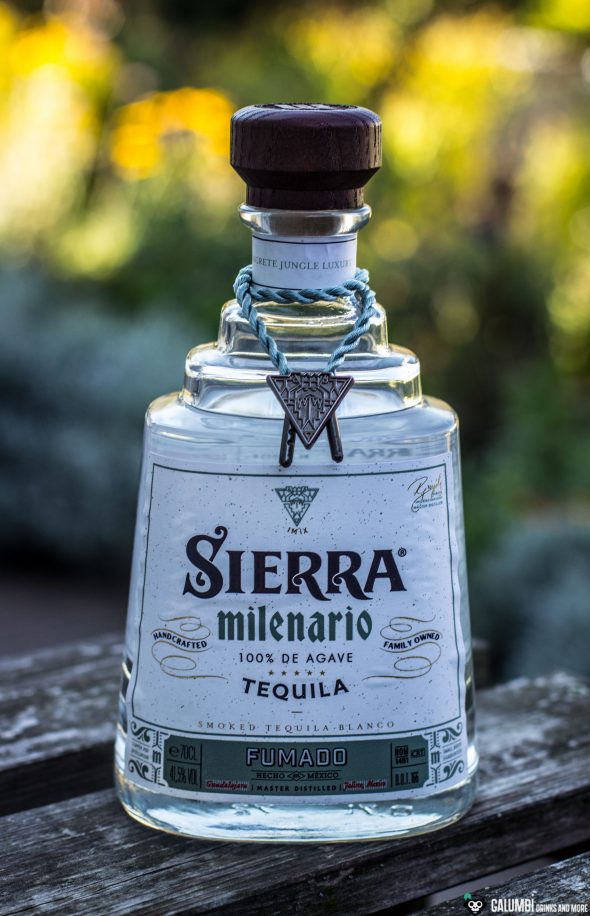 Nevertheless, the fact that a brand with such dominance of course also has what it takes to rise up from the depths of the Mixto-valley and offer premium tequilas of high quality is certainly not as widespread. However, the question is: is Sierra really able to produce good premium tequila? To prove this, Sierra has launched the Milenario Tequilas. These are a whole series of agave spirits, including a Blanco, a Reposado, an Añejo, an Extra-Añejo and a “Fumado Tequila“. In addition, a coffee liqueur is also sold in this series, but it is not a pure tequila. All the tequilas mentioned are exclusively 100% agave tequilas and represent different taste and maturity qualities. The Fumado Tequila was primarily of particular interest to me since it promised to underline the relationship of Tequila with the bigger category Mezcal due to its certain smoky note. Whether and to what extent this is actually the case can be seen from my tasting notes below. 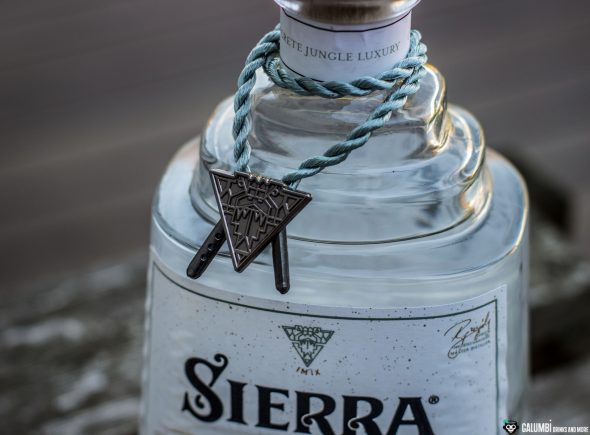 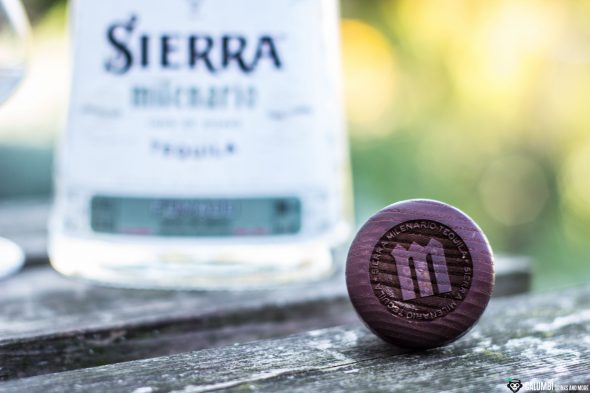 First, I would like to present some details about the Sierra Milenario series and the Fumado Tequila in particular. First of all, the bottles are certainly conspicuous. They rely on the Mayan history of the country for marketing purposes and I really like them very much (besides the Aztecs, above all else the Maya are known as an indigenous culture of Mexico – and even exist until today). The shape of the bottles is in shape reminiscent of the famous Maya pyramids and around their neck they wear small, very nicely designed pendants. These pendants show – depending on the bottle – different protective deities of the Tzolk’in calendar. On the back of the bottles, you can find interesting details about the respective bottle (see photo).

The Sierra Milenario Fumado Tequila is characterized by the first guardian god of the Tzolk’in calendar: the crocodile god Imix. On the back label we also learn – besides information about the bottle number, the name of the Master Distiller and a picture of the emblem of Imix – that this Tequila was distilled twice on copper pot stills and then finished in Mexican wood barrels for a short time. Considering the clear colour, this finishing process could only have taken a very short period. However, which barrels are exactly meant with “Mexican wood”, we do not find out in the end. With an ABV of 41.5% the Sierra Milenario Fumado is filled into the bottles with quite an appealing drinking strength. The agaves come from Los Altos and – this information does not come from the bottle label – grew there in a period of about ten years. 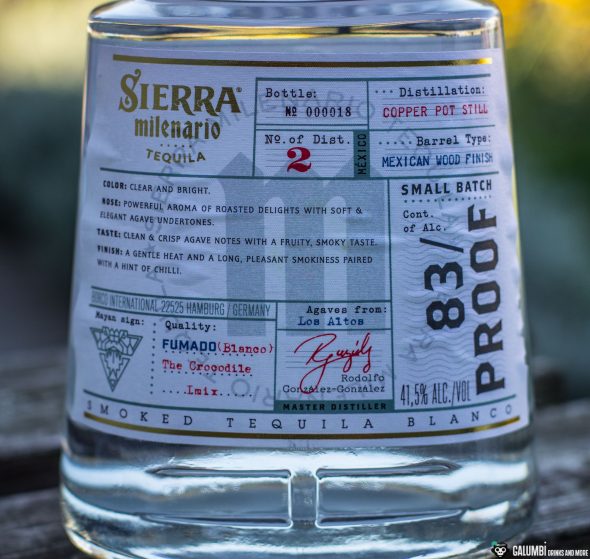 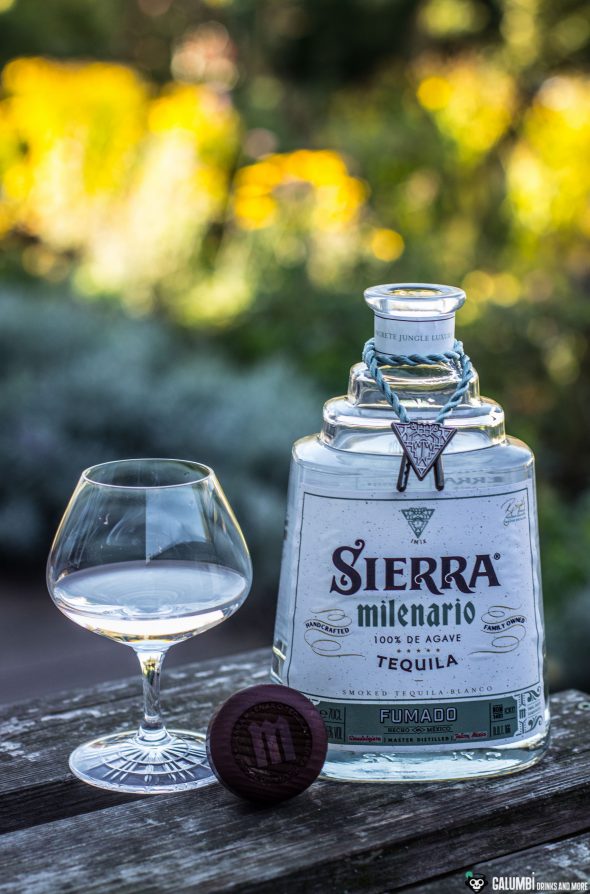 Well, the outer framework information seems to be quite promising. But how does the Fumado Tequila, which is distilled in Guadalajara, the capital of Jalisco, perform in the tasting?

Aroma: I can find typical, earthy agaves, white pepper, sweet notes of unripe fruits (green bananas, figs) and a quite light smoke. In addition, there is also a very fine and subtle vanilla in this tequila, which over time is able to detach itself from the notes of green bananas. But I have to say that I have expected a lot more smokiness considering the name Fumado.

Taste: And there it is all of a sudden: the smoke! While it is really subtle on the nose, it unfolds much more on the palate and in fact shows a certain proximity to the flavor worlds otherwise known from Mezcal, even if it does not really reach the intensity of the smoke of most of these agave spirits. In addition there are very nice vegetal, slightly sweet notes, earthy agave and again a characteristic white pepper. The alcohol is very well integrated and turns out the flavor nuances nicely. A very nice and well-made Tequila, no question about that! 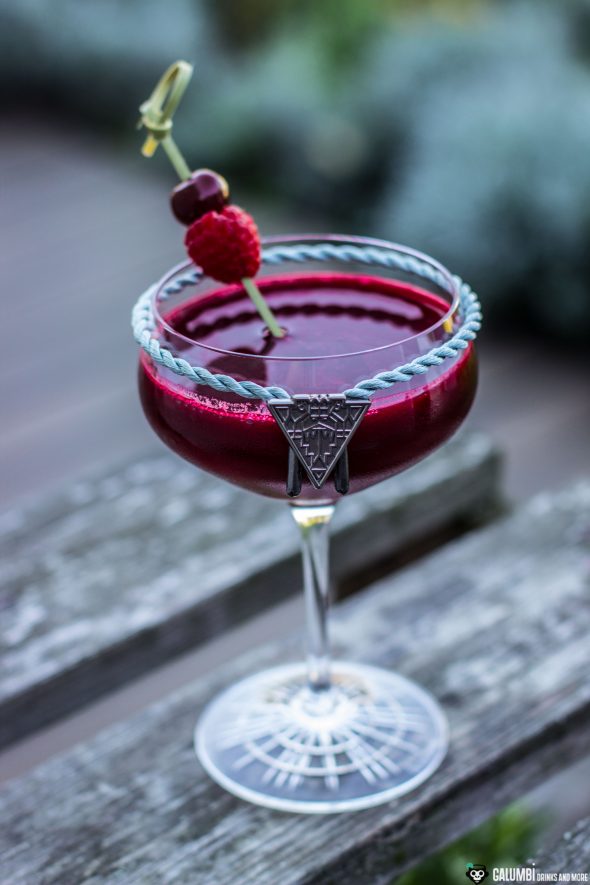 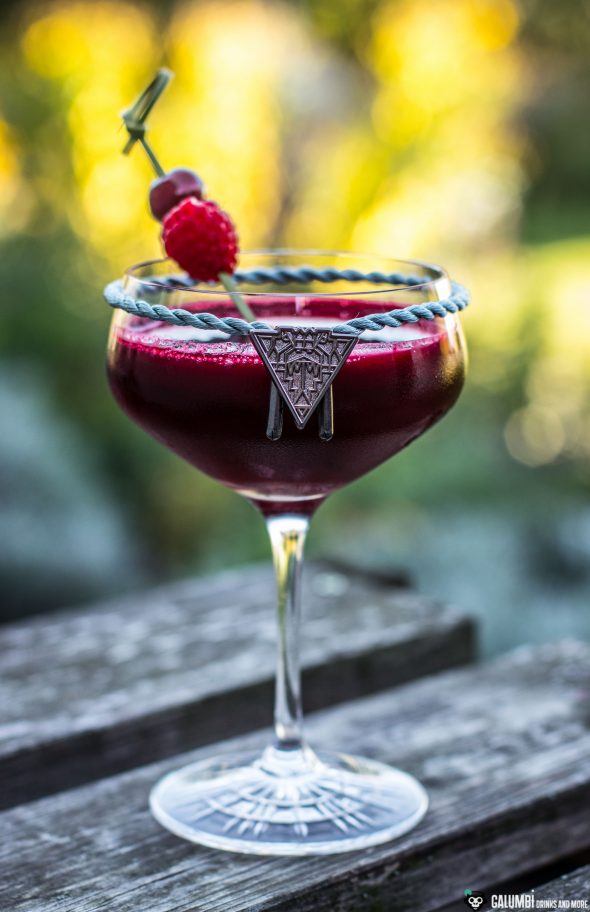 In the aftermath of this tasting, I immediately sat down and thought intensively about a suitable cocktail. Very often, the first ideas come to me intuitively during a tasting, but this time I approached the matter a little bit more “intellectual”. I knew that I wanted to somehow combine the smoke with fruit tones, but at the same time honor the characteristics of the tequila. Therefore, I thought about different options in my head and ended up on unexpected paths. What may sound less promising now, turned out to be a stroke of luck. I simply wanted to open up a world of flavor worthy of a Mayan god, which encourages the connoisseur to pay attention to the drink. And which finally delights him!

I hope that I have succeeded in doing so. I called the drink Teatime with Imix because that’s how I imagine a drink that could be served next to some heavenly pastries at the table of a crocodile god. With the color of dark blood comes this mixture of Sierra Milenario Fumado Tequila, lemon juice, the freshly squeezed juice of beetroot (from the juicer), fresh raspberries, a Dash of fiery Habanero Bitters and the Teatime obligatory jam (in this case cherry jam). Smoke, rich dark fruits, fire, freshness, earthiness and exoticism, this drink has it all! With this in mind, I ask you to come to the table: Teatime with Imix! 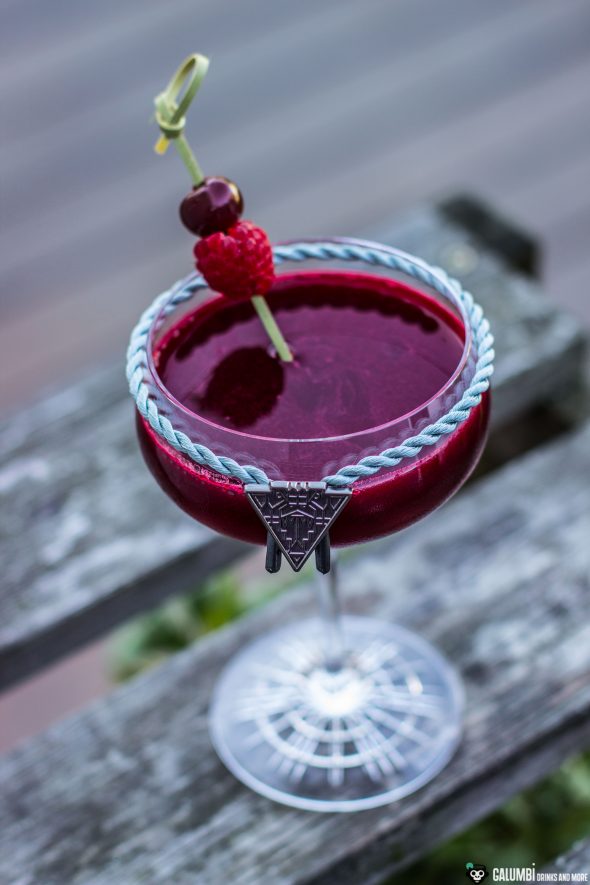 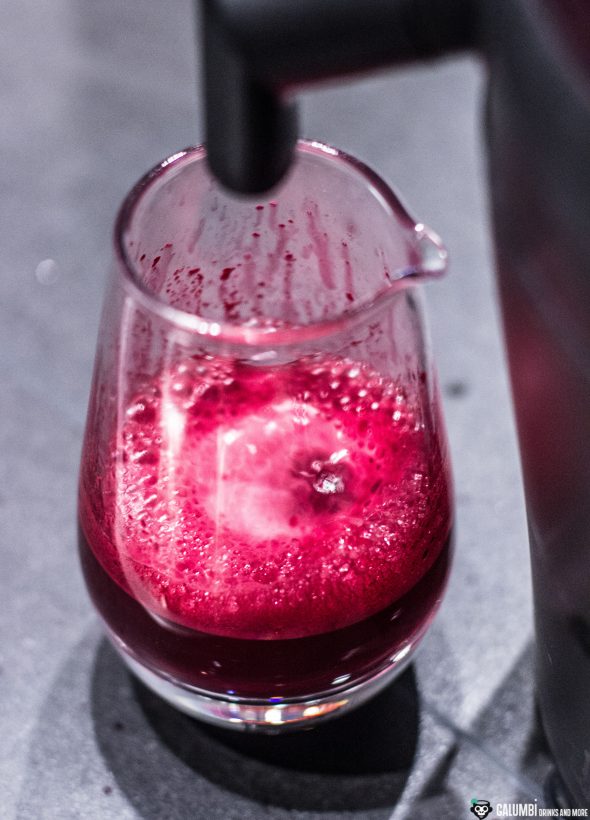 fresh juiced beetroot juice is non negotiable (premade ones from the supermarket are no substitution!)

Preparation: First, crush the raspberries in a shaker with your muddler. Add the remaining ingredients and shake vigorously on ice for about 20 seconds. Then double-strain into the pre-cooled glass. 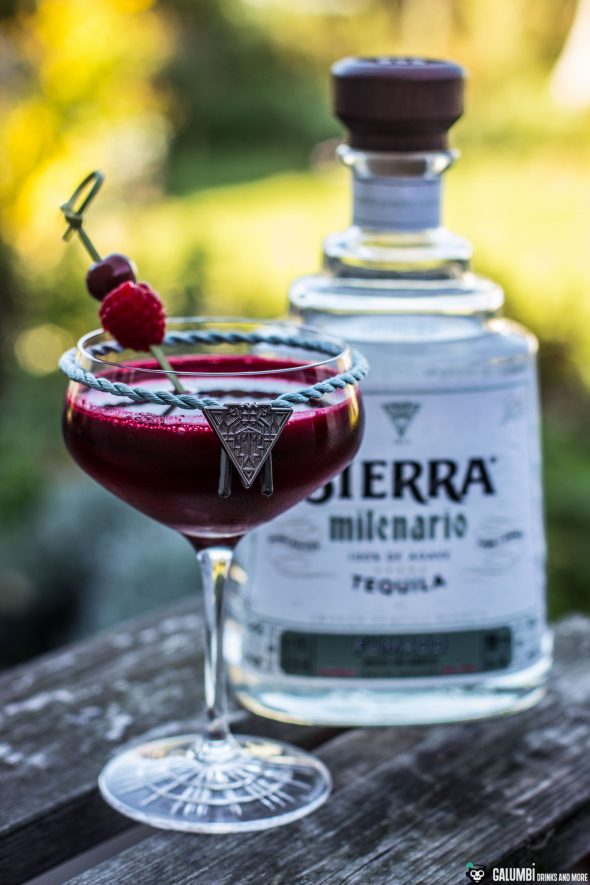 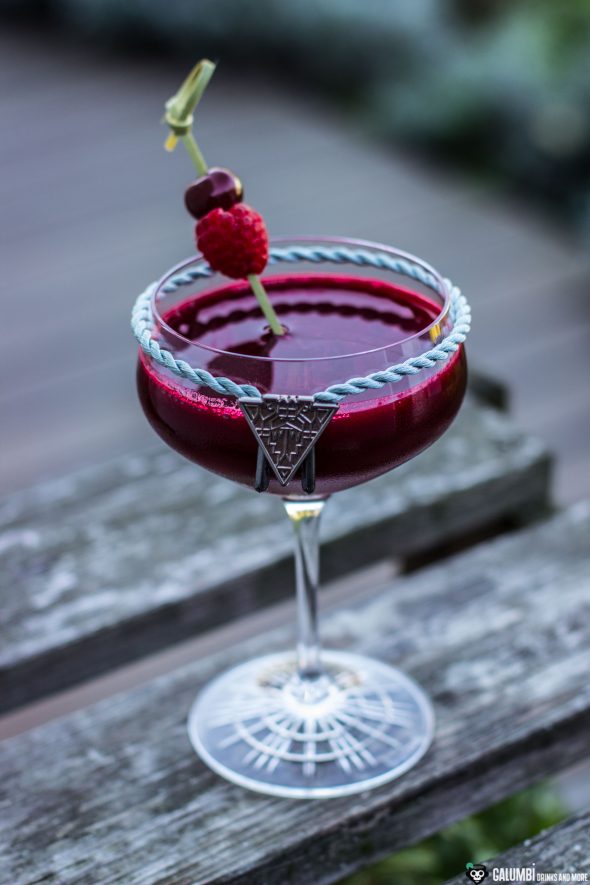 One thought on “Sierra Milenario Fumado Tequila & Teatime with Imix”