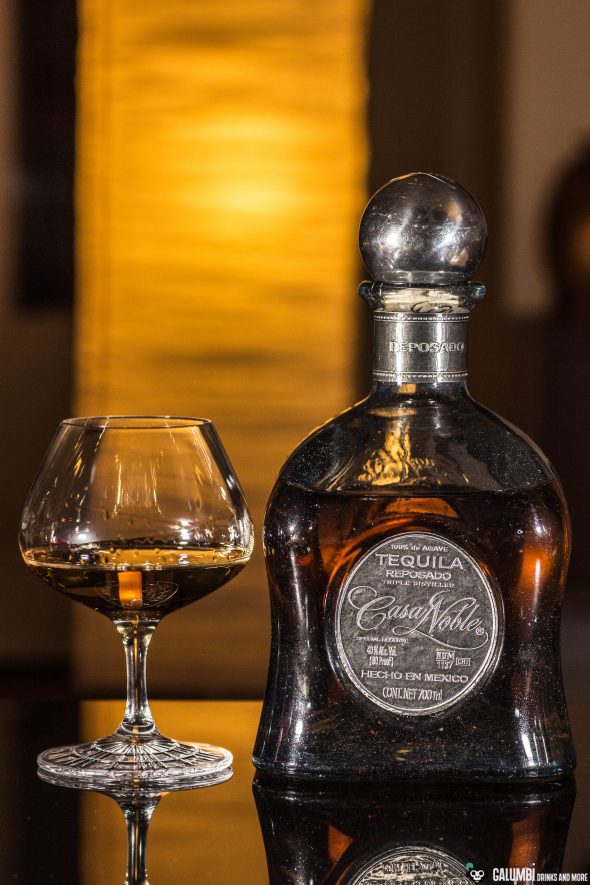 After my recent article about the really great Mezcals from the Miel de Tierra series, I would like to finally take up the topic of Tequila here. Basically, I sometimes wonder myself why I have written so little about this spirit down to the present day. It is all the more wondrous since I am actually a very big friend of the agave spirit. Ok, I have to admit that this is not true since forever because for a long time Tequila has been the same for me as for most people: a clear Mexican booze that comes with lemon and salt (and should better be left untouched).

But the truth is a different one and it is all the more sad that in most of Europe it is precisely this lemon and salt thing that is the main association with Tequila. Nonetheless this habit is not entirely absurd – it is indeed practiced in Mexico but only with the cheaper and usually lower quality Tequila. Who else would have the idea of tasting a quality spirit with pure salt while biting into lemon slice, thus ruining every last bit of subtleness? For a really good premium Tequila this is completely inappropriate. But before I start speaking about today’s premium Tequila, I would like to make some additional words about the basics of Tequila.

First of all, Tequila is a Mezcal. But not every Mezcal is a Tequila. So what may remind a little bit of squares and rectangles has to do with the fact that the regulations for tequila are a little bit narrower than for Mezcal (you can find more information on the latter in my article about the Miel de Tierra Mezcals). Tequila is thus a special kind of Mezcal which features a lot of similarities but also brings its own characteristics. Tequila is mostly produced in the neighborhood of the town of Tequila in the Mexican state of Jalisco. It can legally also be produced in some selected administrative areas of the states of Guanajuato, Michoacán, Nayarit, and Tamaulipas, but the lion’s share comes from Jalisco. Like with Mezcal, in order to make Tequila the heart of the Agave, the “Piña” (for Tequila only the one from the blue Agave Azul, also called Agave Tequilana Weber), is harvested after years of growth and traditionally cooked in earth or stone ovens – some industrial producers also use autoclaves (large steel pressure vessels). The fermentation process of the sugar and juice is now initiated in tanks and then distilled twice, sometimes also thrice. An important distinction here is the one between 100% tequila (required for premium quality) which must be produced from 100% agave syrup and the “Mixto” which only requires 51% of agave syrup, the rest being allowed to come from other sources. It will probably not surprise you when I point out that the widely spread Sierra Tequila with “the hat” (whether “silver” or “gold”) is a “Mixto” Tequila – but if you cling to salt and lemon you won’t taste much of the lower quality anyway.

After the distillation, the Tequila can still mature in oak barrels, which is decisive for its classification as “blanco” (or “silver”) – i.e. fresh distillate filled directly into the bottle, “joven / oro” (or “gold”) – i.e. blanco Tequila blended with matured ones, “reposado” – i.e. Tequila that has matured at least for two months in the barrel, “añejo” – at least one year in the barre or as extra-añejo (at least 3 years). 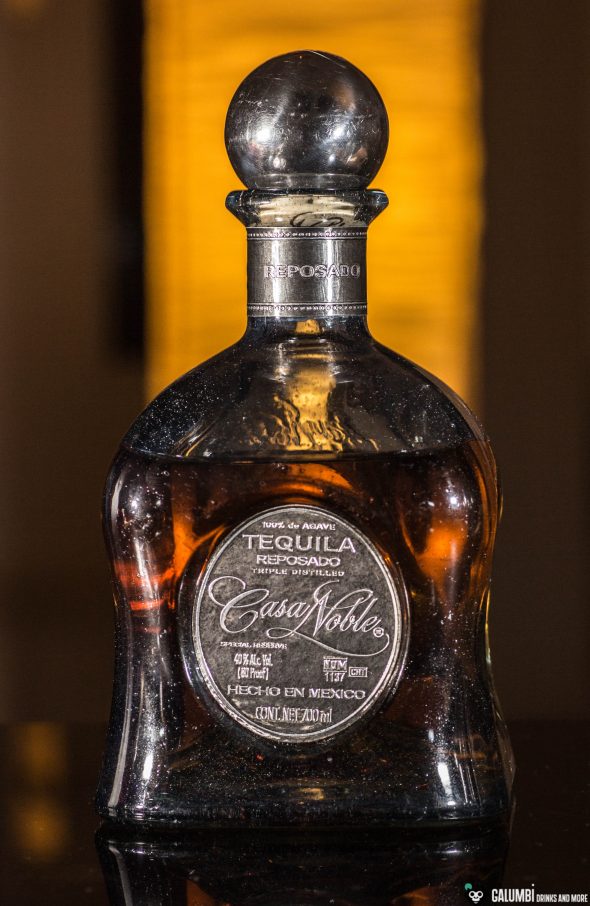 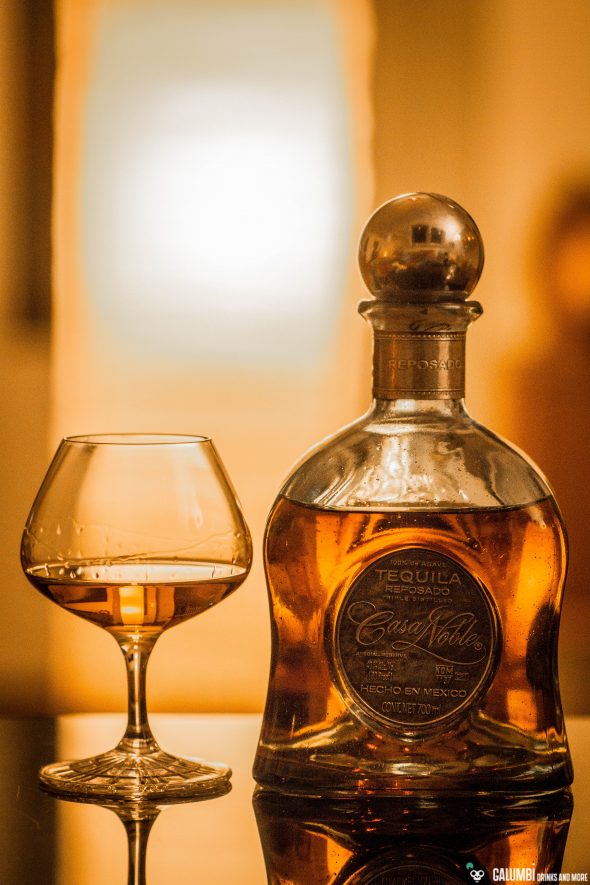 So far so good. Today’s Tequila is a reposado Tequila. And an absolutely excellent one! I do rarely start my reviews with exuberant praise in the first few sentences, but this Tequila really deserves it because it really has blown me away from the first moment on. The New York Times has even called it the world’s best Tequila and also many other critics are full of praise for this bottle. So, the Casa Noble Tequila Reposado, that’s its full name, has some peculiarities that I would like to have a closer look to.

It comes from a distillery in the city of Tequila, which looks back on a history dating back to 1776. On distillery-owned land only organic agaves (USDA Certified Organic) grow on 650 hectares which also form the exclusive basis of that Tequila. No piñas have been purchased from other Jimadores (Mexican agave farmers) – so it is a little similar to Single Malt Whisky. After having cooked in stone ovens and the subsequent fermentation it was distilled three times, which is clearly noticeable on the palate. The packaging indicates that in the making up to 14 years old agaves are harvested. I think this detail must be treated with caution since the addition “up to 14 years old” suggests that this may not necessarily be the rule. 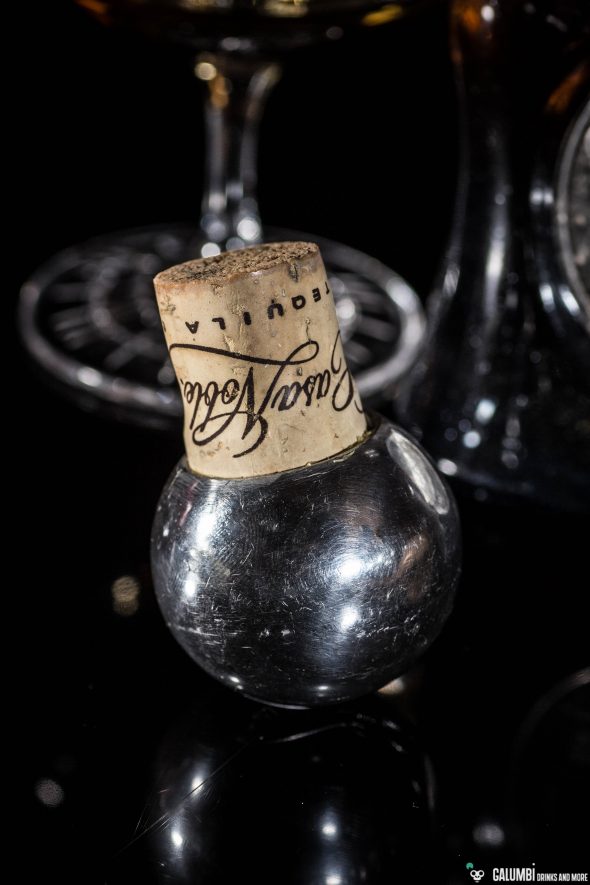 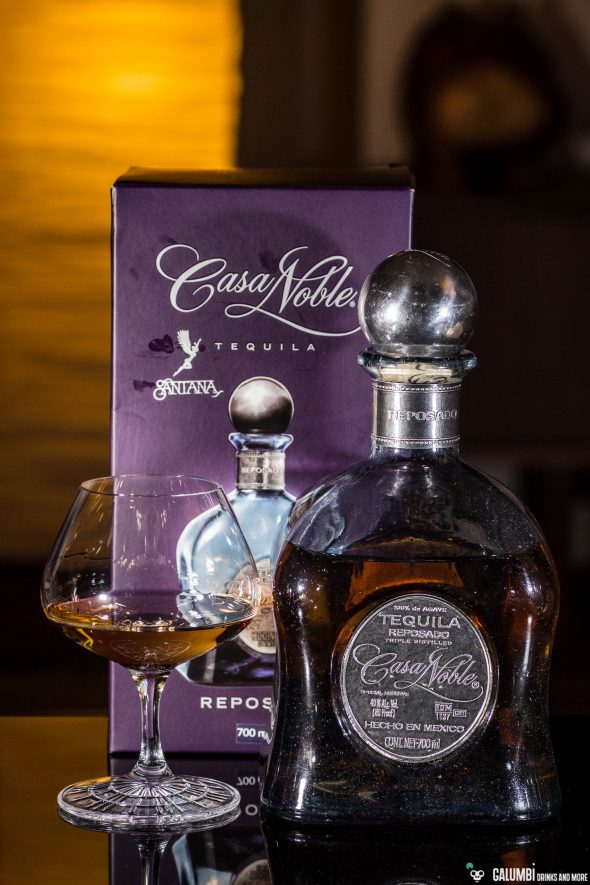 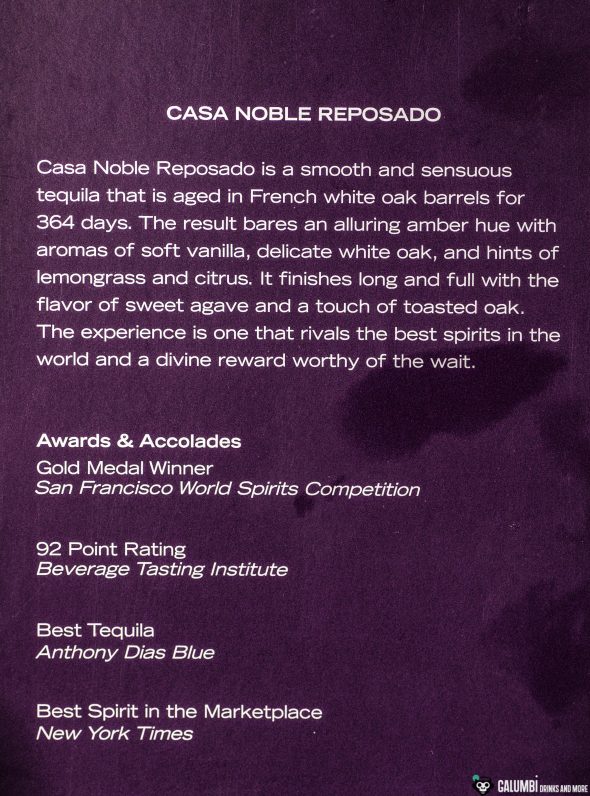 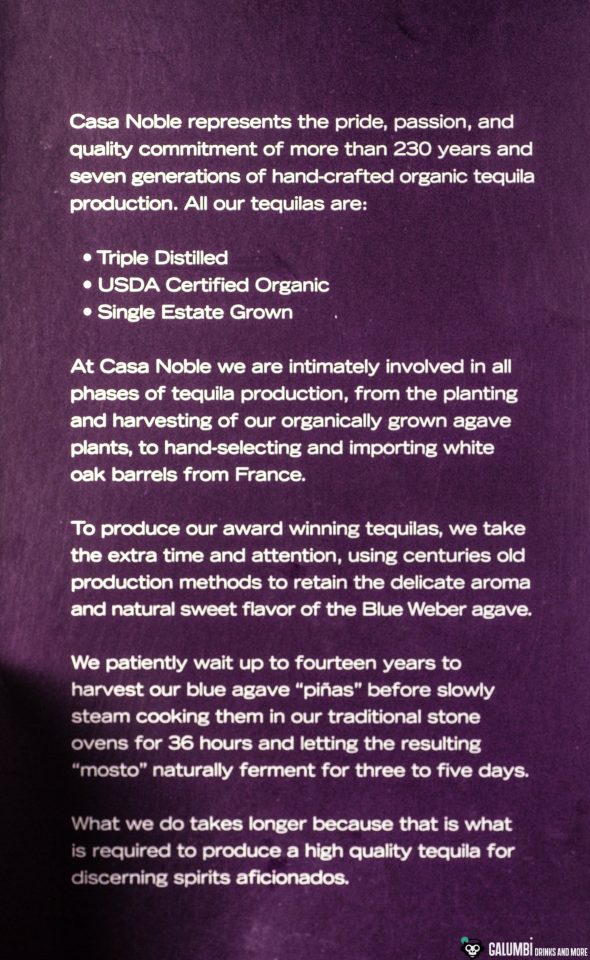 Nevertheless, the producers try to get the maximum out of the reposado category and allow the Casa Noble Reposado a 364 days of maturation, which is exactly one day less than it would need to be called an Añejo. As a marketing gag, Jose “Pepe” Hermosillo, the head behind the Casa Noble series, has won Carlos Santana as a prominent inspiration for the Casa Noble Tequilas (Santana also comes from Jalisco). Now I don’t want to torture you any longer and like to present you the reason for my enthusiasm. 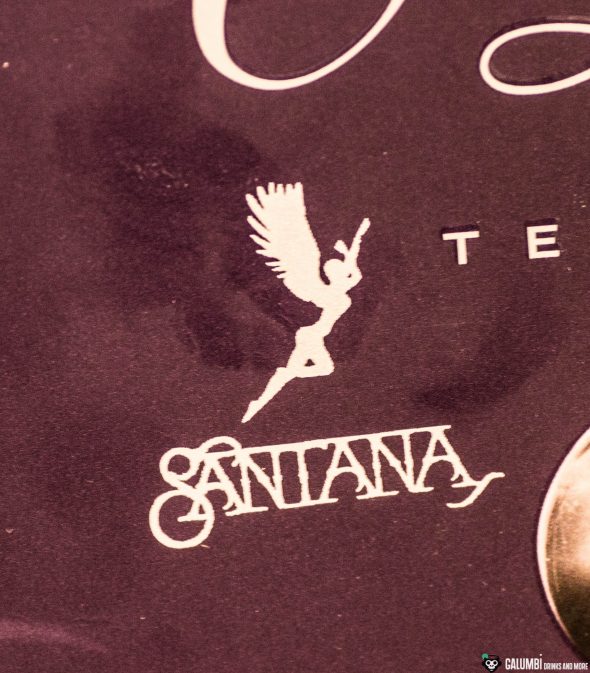 Aroma: On the nose it shows an alluring vanilla with aromatic citrus notes, a little pepper and rose pepper, earthy notes and sweet honey. In the background there’s a complex herbal symphony. This Tequila offers a great aroma; I could easily spend the whole evening just enjoying its scent.

Taste: The flavor of the Casa Noble Reposado is very spicy at first but not from the alcohol, here it remains extremely mild. The citrus tones (indeed there is lemongrass) are there as well as the vanilla. The pepper is more subtle than on the nose with additional heather and a fine lavender honey. The oak comes through in the background with spices. And, of course, the Casa Noble Reposado offers the characteristic agave flavor of its genre. A complex, yet wonderful taste.

Finish: very long, again with a little more pepper and oak, but sweet and warm. Wow, I’m really amazed by this one.

I’d almost say that this Tequila is too good for using it as a cocktail ingredient, but nevertheless I can imagine it for example in Old Fashioned-style drinks where it is not overpowered too much by other ingredients. I will introduce something appropriate here in the future. 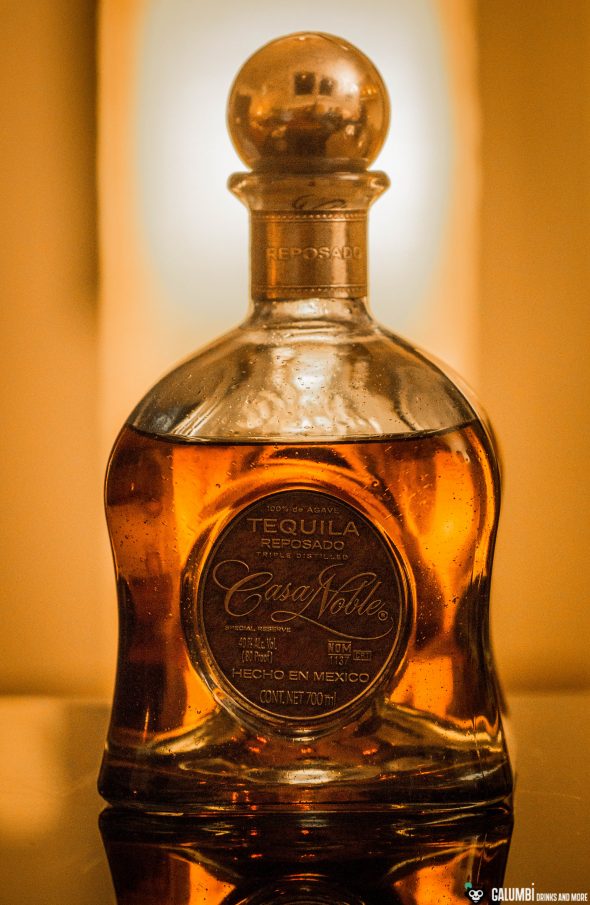 Buying sources: At specialized retailers or online. The Casa Noble Reposado is bottled at 40% ABV and costs around 50€ (0,7l bottle).