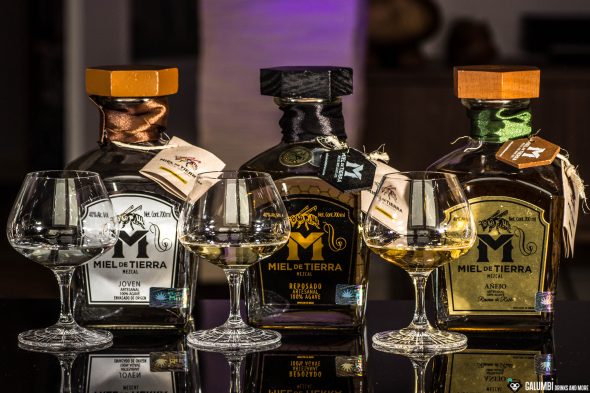 There is a certain type of spirit that I actually did not really devote myself to in its pure form here in the blog. Although I have already published and presented some recipes here in which I have used that spirit category and although I myself have been using it as an ingredient for some years now, in Europe it has not really arrived yet. I’m talking about Mezcal, a Mexican spirit whose variety and taste profile is a true El Dorado for the bar world.

But before I will present a series of three special Mezcals today, I would like to start by explaining a little bit about Mezcal for those who don’t know it yet. Mezcal is made from agaves and goes back in time to the pre-colonial period of Mexico, where presumably priests of the Aztecs already were entrusted with its production. According to legend, once a lightning strike opened an agave plant, cooked its juice and the “elixir of the gods” was born. In the Aztec Nahuatl language, Mezcal means as much as “booze”.

To make Mezcal, the heart of the agave is cooked in earth pits. For this, the hearts are cooked on hot stones in the pits and are then covered with palm leaves and soil. After several days of cooking they are removed and mashed to a pulp. The mash then ferments in large steel tubs (where at least 51% of the mass must consist of agave, but for many premium varieties it is 100%) and is then distilled twice and brought to a drinking strength of regularly 40% ABV. Legally, the production of Mezcal is internationally regulated since 1994 and thus it can only be produced in the Mexican states of Oaxaca (the most famous Mezcal producing state), Durango, San Luis Potosí, Zacatecas and Guerrero. And whoever thinks of Tequila when it comes to Mexico will probably be surprised to find out that Tequila actually is a Mezcal. However, not every Mezcal is a Tequila. It is a bit complicated, as Tequila is only made from the blue Agave (Agave Azul) in the area around the town of the same name. But also other non-Tequila Mezcals are made from that type of agave (for example today’s Mezcals are). In terms of taste, Mezcal is, however, much broader than tequila, and often has more rough and more original flavors, even being competitive to smoky Scotch whiskys due to the production in the earth pits. It is therefore all the more annoying that Mezcal was hardly known for long decades outside of Mexico and the southern states of the USA. For me personally, Mezcal is actually the discovery of the last 6 years; before that time I had no real points of contact with it. So this makes it a very good thing that – in addition to some standard qualities – more and more premium Mezcals are now finding their way to Europe. And I would like to present such premium Mezcals today. One thing I almost forgot: Some Mezcal manufacturers add a small worm into their bottles for marketing reasons. Although this is an entertaining and bizarre custom, it is fair to say that this is of no relevance to taste and is often – if not only – made by qualitatively less convincing manufacturers.

Thus, let’s have a look at today’s Mezcal or at today’s three Mezcals to be precise. They offer a very nice overview of the different maturity levels of the agave distillate. Like Tequila, the Miel de Tierra Mezcals are made from the Agave Azul at an amount of one hundred percent. The Agave is allowed to grow at least 8 years before it is harvested and so we’re virtually talking about a “matured” spirit even before any real maturation took place. However, the Mezcals also did mature in the conventional sense, namely in barrels of white oak as they are also known from the Bourbon production. In this context, the idea behind the sound name of Miel de Tierra is revealed, for the locals call the sweet juice of the oak (which is also responsible for the tasteful maturation of spirits) the honey of the earth (Miel de Tierra). 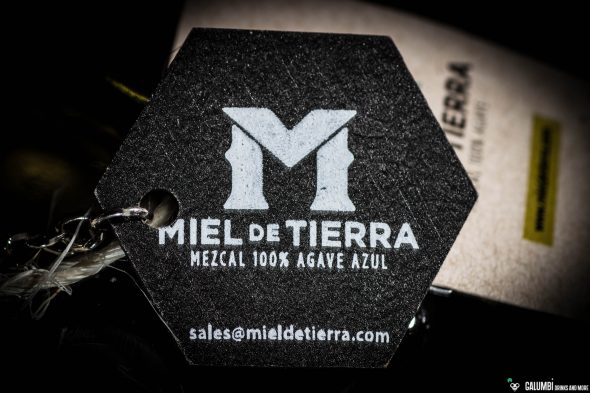 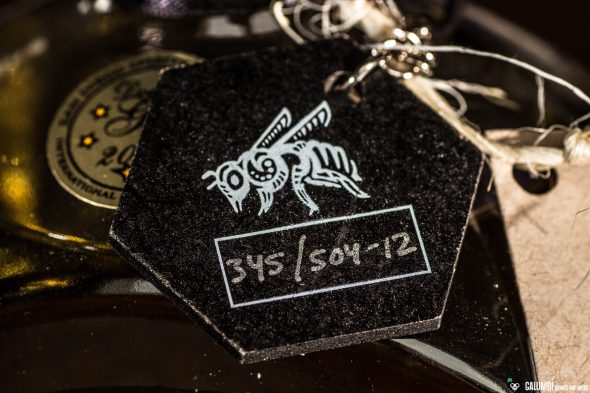 There is information about the batch of each bottle on a small locket around the bottle’s neck. 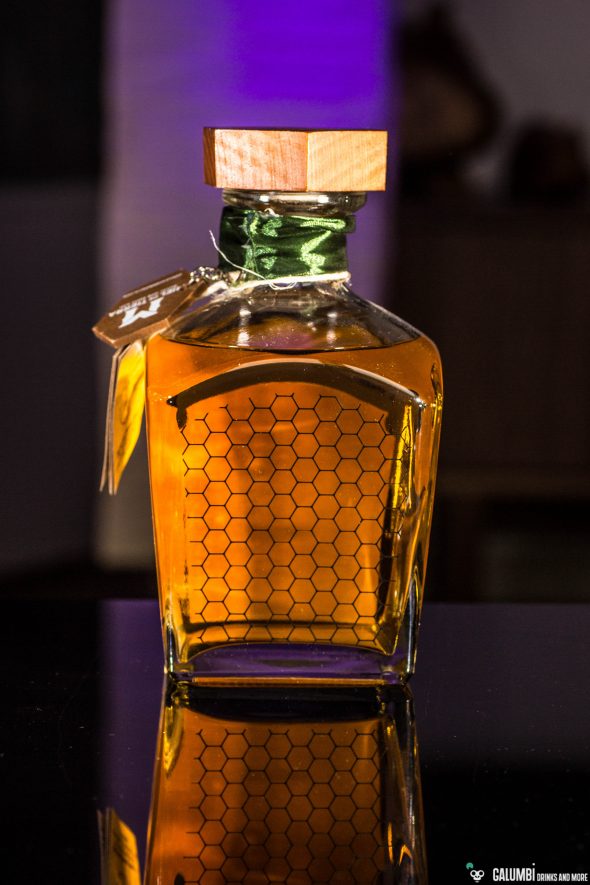 The Miel de Tierra Mezcal comes from the Mexican state of Zacatecas and differs in its character quite clearly from the often more well-known and mostly smoky Mezcals from Oaxaca. It is offered in the three degrees of maturity Mezcal has to offer and is thus an ideal opportunity to combine a product review with general information about that special type of spirit. I would also like to emphasize the design of the really beautiful bottles. Not only is the honeycomb pattern on the back of the bottles a really nice allusion to the name of the distillate, the heavy and massive bottles also look quite impressive; especially the very beautiful cork top and the fine cloth on the bottle’s neck appeal to me. This is a way I really like spirit bottles. But let’s take a look at the individual bottlings. 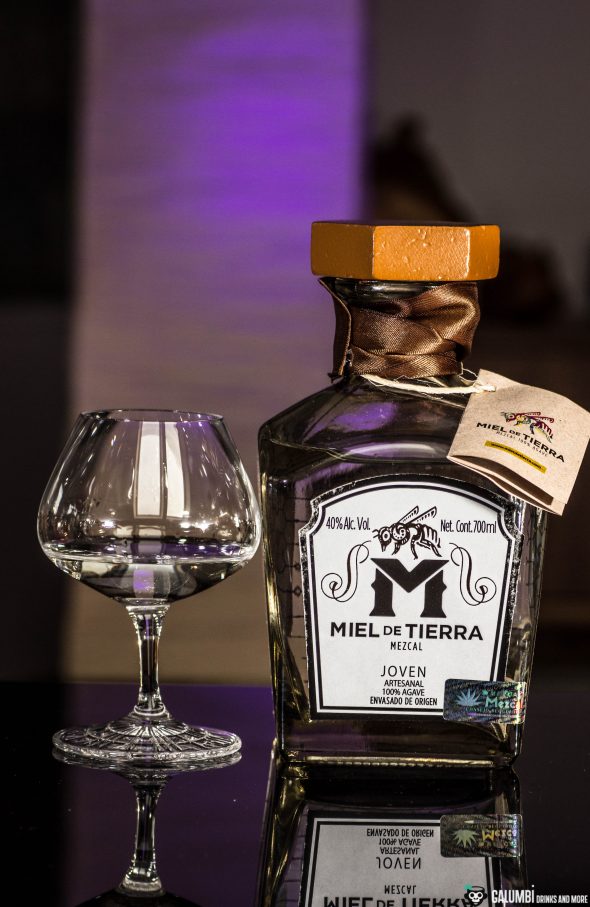 The Miel de Tierra Mezcal Joven (joven = young) represents the youngest member of the Miel de Tierra-Trio. It is, by its very nature, the most original of the three. It matured for two months in oak barrels (would it have been more than two months it would no longer be allowed to call itself “joven”) and mainly aims at more experienced connoisseurs, since the younger qualities are often the more challenging ones . I am very curious about the tasting of this spirit.

Nose: rich, earthy notes; White and some black pepper with a very fine and fresh sweetness like from splitted vanilla beans in the background, also some cinnamon can be scented. A light smoke underlines the overall impression.

Taste: Very surprising on the palate with sweet vanilla and yet incredibly strong spicy tones. Again there is multi-layered pepper (especially white, ground one) and full, earthy notes. All in all without any alcoholic sharpness, instead mild and pure. It offers fireworks of flavors that are well-suited to reflect on for quite a long time. 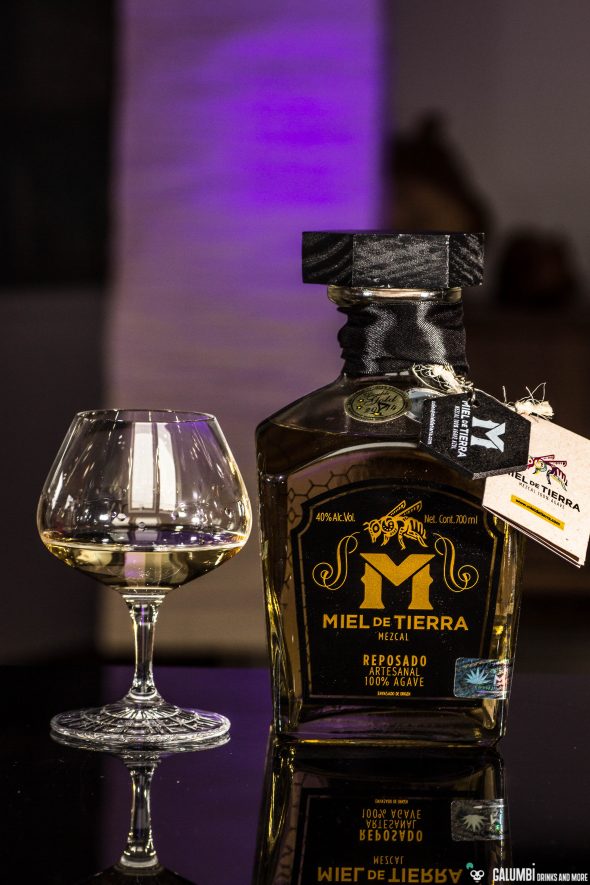 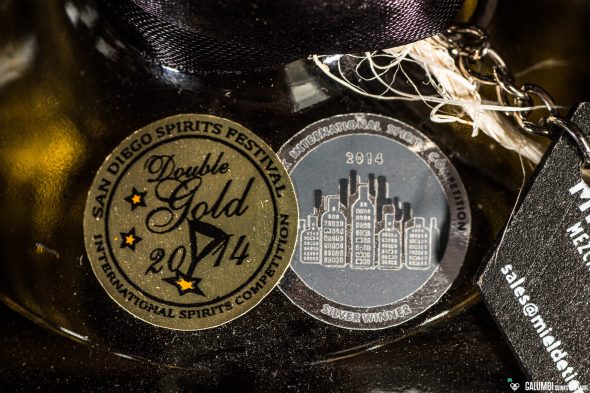 The Miel de Tierra Mezcal Reposado (reposado = aged) represents the next stage of the three Miel de Tierras. Here, the maturing period has already been extended to between 8 and 11 months. The exact time changes between the individual batches and is intuitively estimated by the manufacturer. In order to be sold as a “reposado”, this Mezcal needs to mature for at least 60 days in the barrel (which it exceeds by far). The barrel has already given some color to the Mezcal and accordingly I expect a clear impact of the barrels on the palate as well as on the nose. This Mezcal won the Silver Medal in the year 2014 at the International Wine and Spirit Competition of the City of New York. At the International Wine and Spirit Competition in California it even was awarded a double gold medal for being the best artisanal spirit.

Aroma: Compared to the Miel de Tierra Joven this one turns out clearly warmer with stronger vanilla. The manufacturer speaks of “balsamic” notes, which I would simply translate as particularly mild and pleasant. The earthy and peppery notes are one again there and clearly show the basic character of this Mezcal, but they have moved somewhat further into the background. Compared to the Joven, the Reposado is interestingly a little bit smokier. But rather lightly smoky, as with a mild Scotch Island Whisky.

Taste: Wow, what a prelude! Vanilla, cinnamon, oak notes, honey and some cayenne pepper surrounded by a mild, earthy mantle. Very complex and multi-facetted, but not subtle, in fact rich and temperamentally. A great taste which – compared to many Oaxaca Mezcals – offers something new, which definitely must not shy away from any comparison! 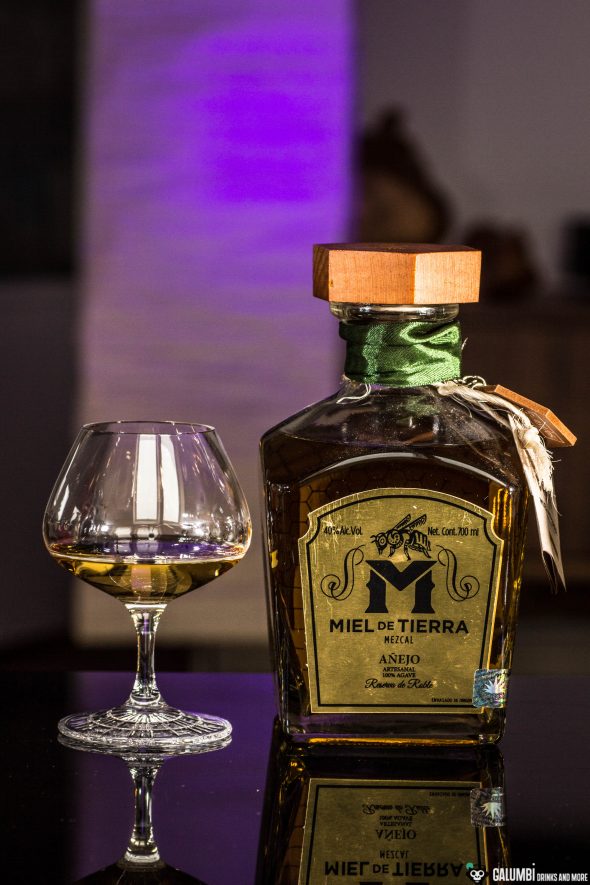 Finally, the Miel de Tierra Mezcal Añejo (= old) is the oldest of the three Mezcals with a barrel maturing period of 3 years. This is clearly more than actually prescribed by law, because after a year it could have been sold as “añejo”. The fact that this time has now been tripled is, of course, a clear sign that the manufacturer wants to offer a very different and sophisticated flavor which I am very curious about. In terms of color one can clearly see the longer time of maturation.

Aroma: Earth and pepper tones took a backseat in this one but are still noticeable. In their place comes a full and rich vanilla, in fact I had associations of Bourbon, but also of bourbon cask-matured Scotch whiskys. A light smoke is also there. Oak, honey and vanilla dominate against a weak, ground pepper.

Taste: Gentle and mild from the very beginning. Strongly characterized by oak and a rich honey with additional vanilla. Earthy and peppery notes are still there, but definitely the weakest of all three Mezcals. I would recommend this one for beginners who have no big experience with Mezcals, you can’t really fail with this one. It is a beautiful and balanced agave distillate with a gentle and very fine smoke.

Finish: long, mild, some cinnamon, vanilla and above all there is oak.