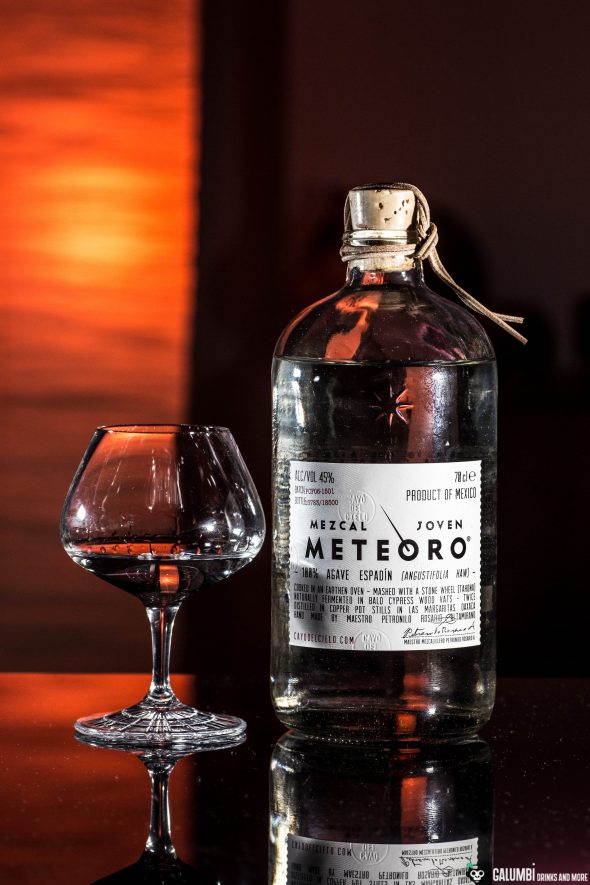 And once again it’s about Mezcal today. So it might not be all too difficult for you to realize that I’m really hooked on this specific kind of spirit which successfully managed to cast its spell one me. Of course, I am not really alone with this, but the great era of Mezcal and Tequila still seems to be imminent. To speed up the coming of this era, I would like to contribute with another small article about a beautiful bottle.

The attribute of the “beautiful bottle” can be explained in two respects, because not only do I like the content of this bottle very much as I will explain later in detail, but also the appearance of the bottle has convinced me from the very beginning. It unites a very simple, unpretentious but nevertheless lovely and proper styled design in a skillful way. A bottle to which I would immediately be drawn to in any liquor rack. To explain that a little further, let’s have a closer look on the Meteoro Mezcal’s front label. It offers all the essential information that will be of interest to the Afficionado. So we learn that the Meteoro Mezcal comes at a quite impressive amount of 45% ABV. Furthermore it is made from 100% Espadín Agaves. This type of agave is by far the most commonly used variety in the production of mezcal, which, in terms of flavor, promises a familiar and comfortable feeling. Agave Angustifolia, that’s the botanical name, is cultivated in various parts of Mexico, mainly by small-scale farmers, who also often work as Mezcaleros and produce the agave spirit on their own farms. Such a small farmer and Mezcalero also plays a major role in the background story of the Meteoro Mezcal, which I will discuss in the next paragraph. First of all, the label also provides information about the batch and the corresponding bottle number, so that you will also have the possibility to compare this one with a bottle of another batch. The Meteoro Mezcal is a Mezcal of the Joven category from the largest and most famous Mezcal region of Oaxaca, accordingly it matured in the barrel for a maximum of two months, but due to missing information I guess we’re more likely dealing with a non-matured spirit here. Above the quality-certifying signature of the “Maestro Mezcalillero” Petronilo Rosario A. there are also details about the production on the label: After the cooking process in the classical earth pits, the cooked agave hearts (piñas) are ground with the classic stone wheel (tahona) and left for fermentation in vats made from cypresses before they are finally distilled twice on copper pot stills in the village Las Margaritas in Oaxaca. (I have also written a little more detailed information about the production of mezcal in this article.) 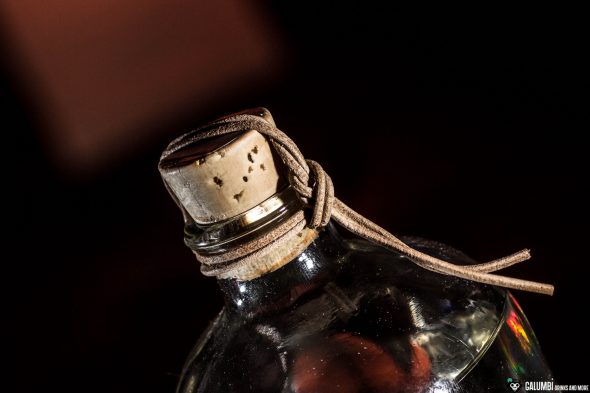 The legend of the brand marketing of the Meteoro Mezcal is a special story about the origin of the first earth pit in which this mezcal has been produced. According to this story, “small eyes of fire” fell out of the sky above the Sierra Madre de Oaxaca in the south of Mexico many years ago (how long ago this has exactly been is not told). They struck the earth everywhere and one of the local Master Mezcaleros took the opportunity to cook his piñas from now on in one of the craters that the small comets struck into the earth, thus creating the best mezcal of the whole region. As an answer to the question how he could make such an outstanding Mezcal, it is said that he has answered: “It fell from the sky”.

Legend and truth may have intertwined here very much, of course, but as a marketing story I do like it somehow. Anyway, the Meteoro Joven Mezcal also tastes really good, as I would like to show you with my Tasting Notes. 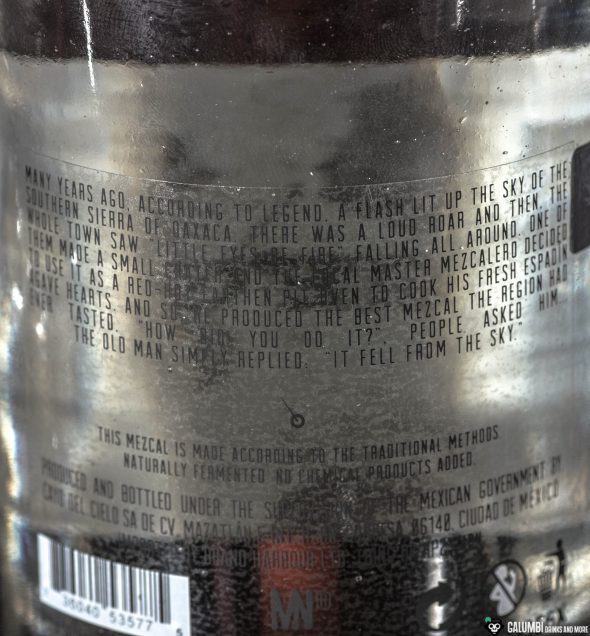 The label says: ‘Many years ago, according to legend, a flash lit up the sky of the southern sierra of Oaxaca. There was a loud roar and then, the whole town saw “little eyes of fire” falling all around. one of them made a small crater and the local master mezcalero decided to use it as a red-hot earthen pit oven to cook his fresh espadín agave hearts. and so, he produced the best mezcal the region had ever tasted. “how did you do it?”, people asked him… the old man simply replied: “it fell from the sky”.’

Aroma: The Meteoro Mezcal has a somewhat decent smokiness, which is however very phenolic. There are mezcal typical notes of earthy and slightly peppery nature, behind it some sugar syrup, a touch of burnt cinnamon, star anise and gingerbread. It offers a very finely tuned and balanced, impression which is quite unusual for a Joven Mezcal, but I like it very much. A highly complex mezcal that can easily be enjoyed for a long time only by scenting it.

Taste: On the palate the Meteoro starts quite forcefully, but luckily not really as pungent and devastating as a comet. The agave notes are immediately noticeable and are accompanied by the aromatic, not too offensive smoke. This mezcal is almost a little creamy with fine sweetness and light, white pepper. Some citrus peel is also there. Very beautiful!

Finish: Mineral, intense agave and white pepper. A great Oaxaca Mezcal which I can absolutely recommend for having it neat. Also inside of a cocktail it will surely cut a fine figure, but I would definitely opt for a more puristic style of drink.