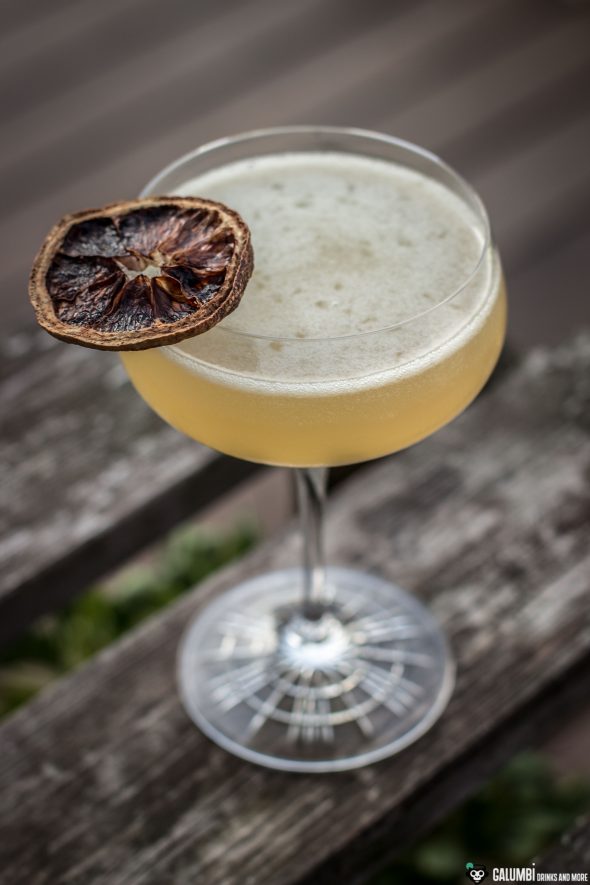 The international spirits market has changed a lot during the last decades. Of course, people also have enjoyed drinking spirits in the past and thus have generated a solid demand for it, but it is the premium segment in particular that is changing into an increasingly important part of the market. There are premium spirits springing up like mushrooms in every nook and cranny and the enthusiasm of the people seems to be unbroken. Last but not least, this blog is also an example of the described development. And when I think of spirits that are sprouting from the ground, I almost automatically think of gin. (provided test product)*

That may not sound very enthusiastically, and I am indeed one of those people being quite skeptical towards some trends on the international and national gin markets. Nevertheless, I still value a good gin. And I would like to find out in the following whether I have such a gin in front of me today or not.
The bottle, which is very much based on simple elegance, certainly comes up with a name that is hard to beat in terms of extravagance and classic noblesse: Benguela Diamonds Gin – Spirit of the cape. Nonetheless I got a short fright here at first and asked myself whether the absurdity of the gin market has now pushed forward into vodka spheres and if I am holding a gin that is „filtered through diamonds” in my hands. But a little background research fortunately did not confirm this suspicion. Behind the name is a South African company (also operating a branch in Switzerland), which promotes “diamond safaris” on the South African west coast (don’t worry, to my knowledge this is not about the infamous blood diamonds, but about maritime diamond mining involving the local population). Without wanting to go further into detail here, obviously the inclined customer can dive after her or his own diamonds under professional guidance. Well, at least it is not a gin filtered through diamonds! Nevertheless, the story would not have convinced me until here and the suspicion of another “agency gin” with an ominous indication of origin was still in my mind. 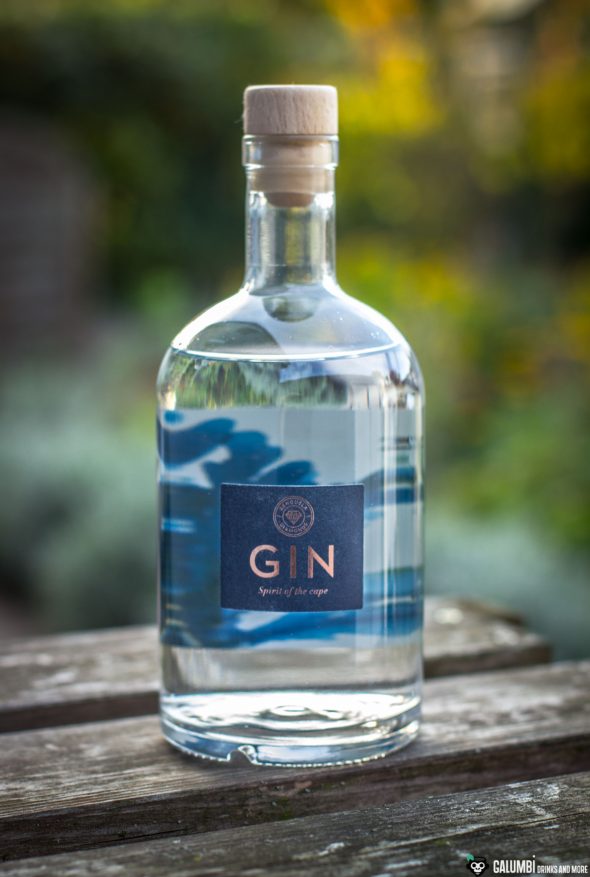 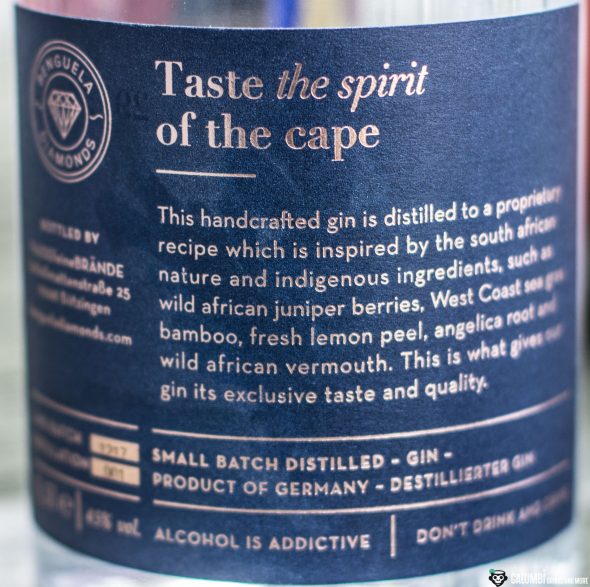 But when I read that Florian Faude, a renowned distiller in the German spirits world, was behind the gin (who became famous for his excellent fruit and vegetable eau de vie-label “Faude Feine Brände“), my interest and the corresponding expectations were suddenly awakened. In addition to Florian Faude, gin expert Pat Braun is also part of the team behind this gin once again. I am writing “again” because both of them have already been responsible for the very recommendable “B my Gin“. Together with Michelin-starred chef Jan Philipp Berner, both were commissioned by Benguela Diamonds to design a gin to match the regional flair. 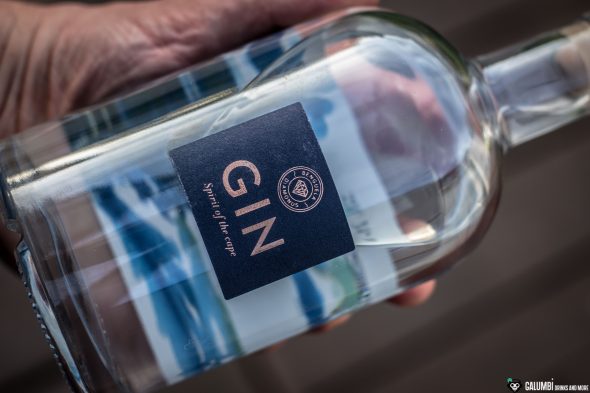 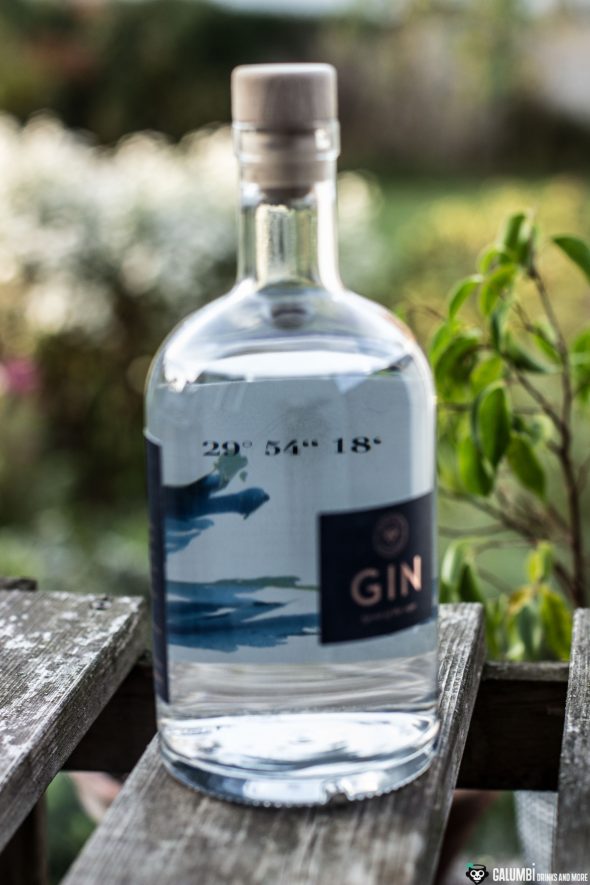 The very attractively designed bottle has a bluish-maritime wave pattern on the back of the back label. In addition, geographic coordinates can be seen, the position of Port Nolloth, which is the center of marine diamonds mining in South Africa.

Benguela Diamonds Gin is a Small Batch Distilled Gin with an ABV of 45%. It is distilled and bottled by Faude Feine Brände in Germany. The actual reference to South Africa is reflected in its composition: Florian Faude and Patrick Braun undertook a trip to South Africa last year, in particular to travel to the West Coast region and to think about a flavor concept. They also had the professional support of a botanist from the University of Cape Town. Finally, the two distilled their first samples in South Africa until the final recipe was determined. In addition to juniper, they reveal the addition of lemon, angelica root, coriander, African wormwood, angelica seeds, cardamom, African lavender and sugar kelp which find their way into the gin. Especially the sugar kelp made me listen up again, because I really loved the Isle of Harris-Gin. But now I want to let my tasting notes speak for the Benguela Diamonds Gin. 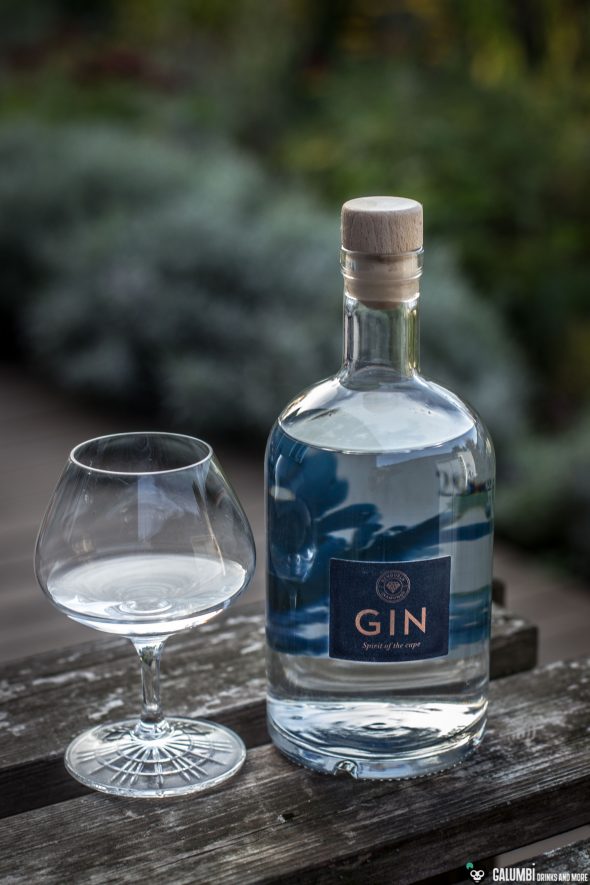 Aroma: Ok, there’s a lot in here! A very nicely balanced gin, which finds a good compromise between juniper and citrus tones, whereby the latter definitely go in the direction of a very rich and spicy lemon peel (no trace of oranges!). I clearly find coriander, a hint of lavender and cardamom and quite maritime hints, although – similar to the Isle of Harris Gin – I cannot tell if it is the “typical” smell of sugar kelp here. The aroma is very appealing, complex and intense.

Taste: On the palate, the 45% vol. come up with spices and herbal tones. The juniper appears to be stronger here than on the nose, combined with lemon tones, lavender, associations of pine needles and an idea of sea salt, as well as extremely subtle menthol tones. Although it is not explicitly labeled a dry gin, the Benguela Diamonds Gin turns out very dry.

Finish: dry, spicy and in the finish again with maritime tones. 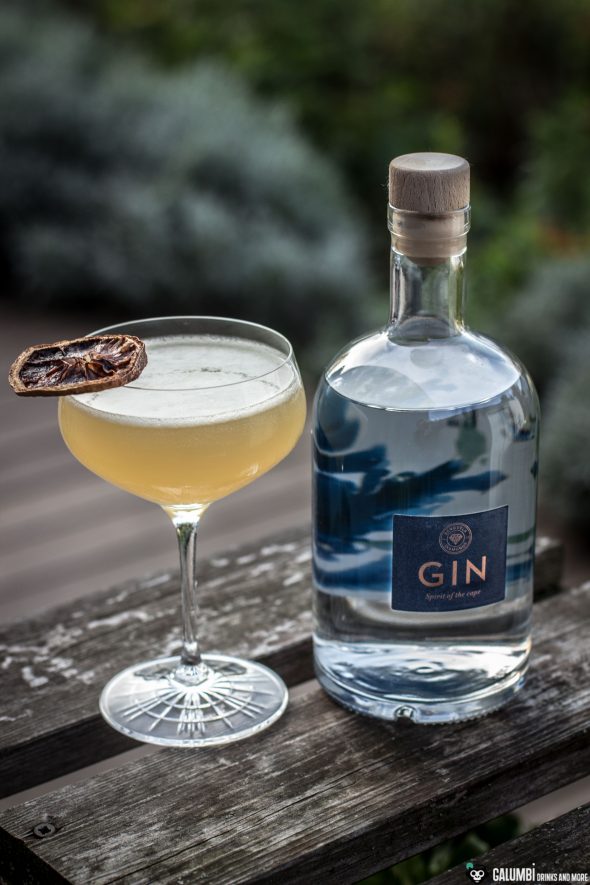 In a Gin & Tonic I can imagine the Benguela Diamonds Gin very well with a Fever Tree Mediterranean Tonic. But I wanted to prepare a real drink and so I got stuck with a classic that I haven’t introduced here before, but which is already a benchmark for a gin in a way: the Corpse Reviver #2. The Corpse Reviver #2 is a drink that – you can tell from the numbering – ultimately goes back to one or more other drinks. In the end it was Harry Craddock in his famous Savoy Cocktail Book from 1930 who listed several Corpse Reviver recipes and numbered them accordingly. The name of these drinks can be explained against the background of the widespread assumption during the 19th century that a strengthening alcoholic drink in the morning was an effective remedy against a hangover. In the meantime, of course, we know that this is not only nonsense, but even dangerous to health. 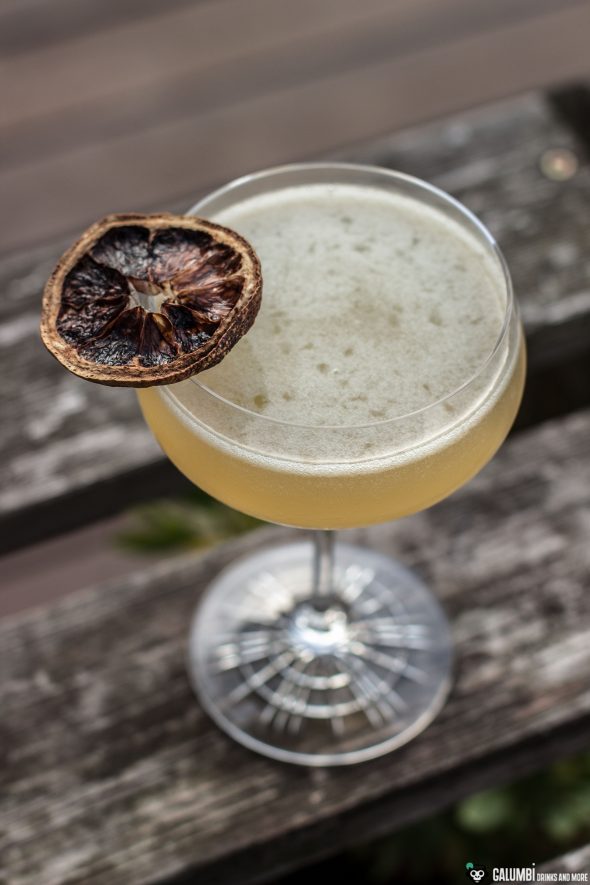 Nevertheless: the Corpse Reviver #2 is considered by many (including myself) to be the best Corpse Reviver and I would therefore like to list its recipe here (it is easy to memorize because it is an equal proportions drink). But why is this drink a benchmark for a gin? Well, it has the peculiarity that, thanks to its ingredients, it puts the basic spirit to the test twice: On the one hand, the gin has to be recognizably resistant to the other ingredients, but these bring in rather “light” aromas and give a gin that can stand its ground the opportunity to give the drink its very own character. And what can I say? The Benguela Diamonds Gin has passed this test with flying colours! 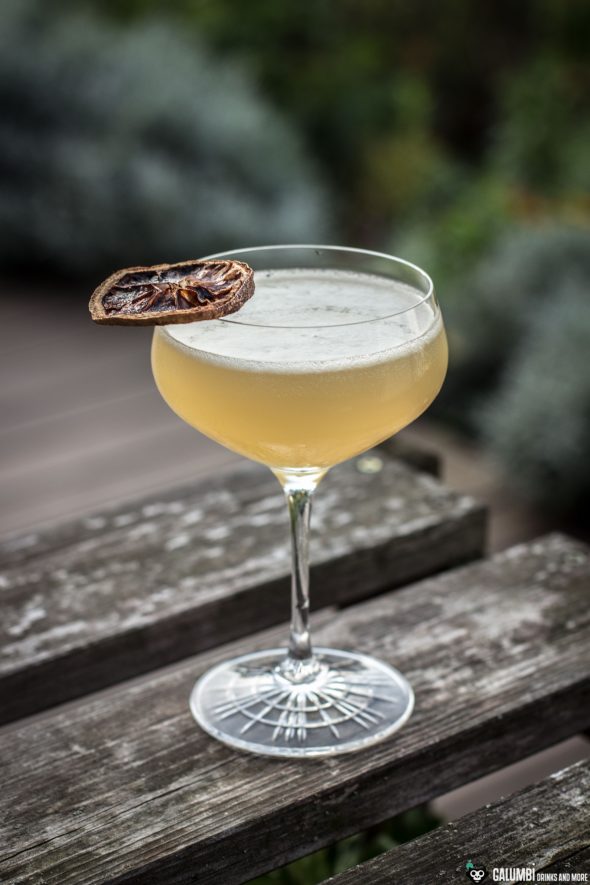 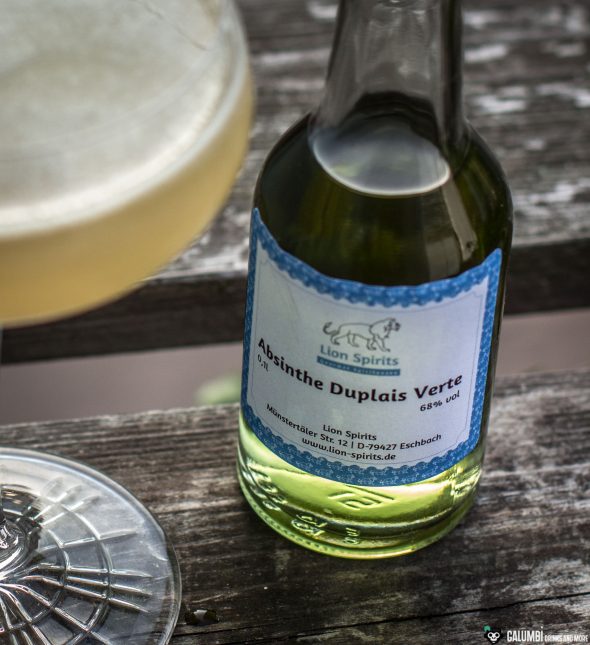 Garnish: dried slice of lemon (the classic garnish is an orange zest)