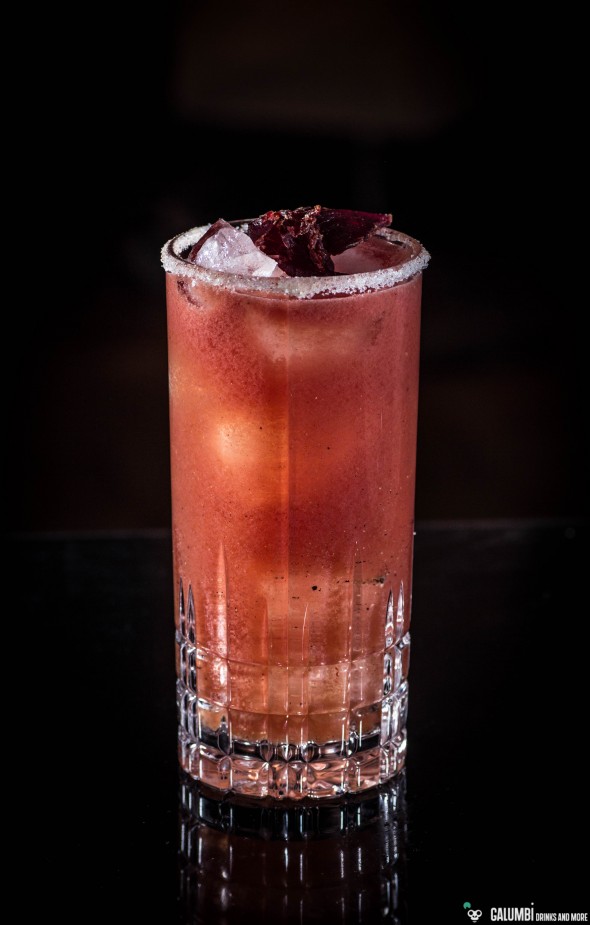 Today’s article is about nothing less than one of the most famous cocktails of all time. Everyone knows it, almost everyone has at least seen or even tried it but by far not everyone would ever order it in a bar or anywhere else. We are talking about the almost legendary Bloody Mary.

Most people may think of two initial things when being confronted with a Bloody Mary: “tomato juice” and “hangover cocktail”. People who are a little bit more into the topic may then ask further questions: with gin or vodka, pepper or Tabasco, in the morning or in the evening? The Bloody Mary is a highly complex issue, although it is actually easily made. But first of all: Who really hates tomato juice will probably face quite an obstacle. Maybe it helps to rely on self-made juice like I try to do. If possible, when mixing a Bloody Mary I try to make my own juice from ripe tomatoes of my choice in the juicer, which leads to a much more aromatic cocktail than using the bought stuff from the supermarket.
The second spontaneous association, “hangover cocktail”, also calls for a comment or two, because often the Bloody Mary is exclusively seen from that perspective which really does the drink wrong in my opinion. Well, of course that is the classic context of the drink and the reputation as a hangover-cocktail will most likely not end in the near future (and of course not due to me writing this article), but in my opinion this whole category should be treated with caution; not to say this category is a bad one. To “counter” alcohol with new alcohol in the morning really isn’t a good idea and anything but healthy. For many people, the whole issue may easily backfire and make things a lot worse. Good reasons for not drinking a Blood Mary in the morning (the same goes for every other alcoholic beverage, of course). Such a beautiful cocktail deserves a little more appreciation. So you should enjoy a Bloody Mary in full possession of your senses and in a relaxed atmosphere and surely that is not the case when facing a blurred line of sight while standing on shaky ground. 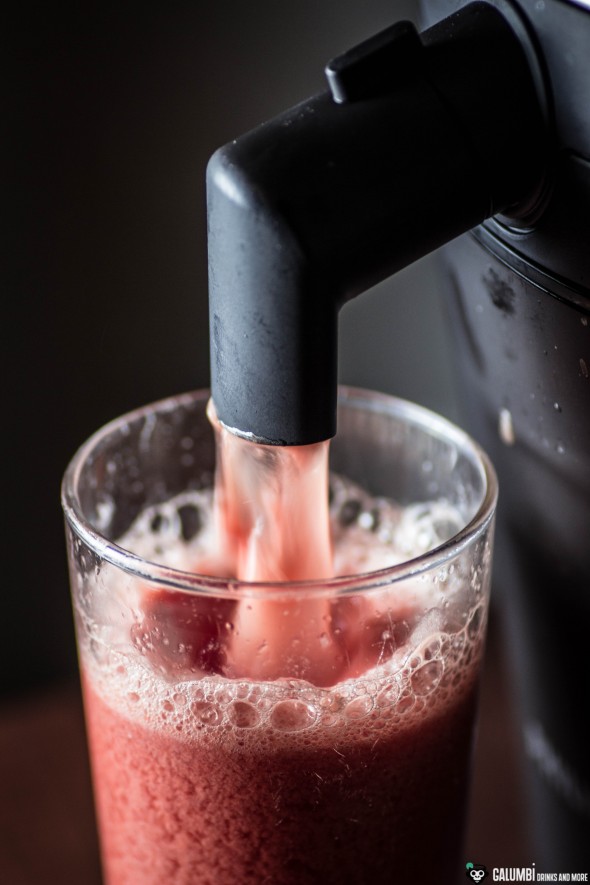 Self-made tomato juice is often better then the one from the stores. If you use ripe and aromatic tomatoes!

I don’t want to lose many words on the history and the numerous legends about the Bloody Mary since a lot has already been written about these things. Only this: Most likely the drink originally was invented by French bartender Fernand Petoit in 1921’s Paris. Later Petoit refined his recipe in New York, where the drink also became famous under the name “Red Snapper”. Originally, the Bloody Mary of Paris was made with vodka, in New York then with gin, then vodka startet to take the gin’s place, only to be replaced with gin again by many bartenders in the present days. I am also relying on the zeitgeist and prefer to mix my Mary with a good gin, since it bestows the drink with relatively beautiful flavors in comparison to the often boring and neutral character of vodka. Supposedly, the name of the cocktail is no reminiscence of Mary I. Tudor by the way, but was given because of a waitress that one of Petoits guests had a crush on.

For the Bloody Mary of course countless recipes exist. The classical ones mostly consist of gin or vodka, tomato juice, usually some lemon juice, pepper, salt, Worcestershire sauce and / or Tabasco.

For my own Bloody Marys I’m often following new recipes and ideas inspired by a certain “atmosphere”. A very nice version I had in Tokyo a few years ago, where the drink was made with a little wasabi and a little sherry vinegar. As a garnish (or side dish) a few strips of steak were served (only seared for a few seconds and almost raw in the middle) with some ponzu sauce. I really loved that one and so I tried to make it on my own!

Most often, however, I opt for a rather smoky variant inspired by the flavors of an all-American BBQ. Here, Chipotle Tabasco is used (or another Chipotle Hotsauce). It’s smoky and spicy aromas work absolutely excellent inside of a Bloody Mary. Refined with spicy lime juice, Lee & Perrins Worcestershire sauce (not to be substituted by generic products under the name “Worcester sauce”) and garnished with Beef Jerky, this recipe is a real treat and I can only recommend it to every friend of hearty, strong flavors. 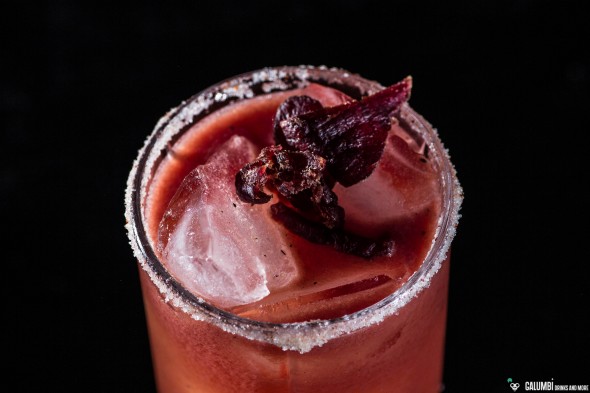 Beef Jerky as a garnish

Preparation: Mix all ingredients in an ice-filled Boston shaker and “roll” until cold. To roll a drink simply pour the liquid including the ice from one container to the other. Repeat for approximately seven to eight times, then strain into your pre-chilled glass.

Preparation: Mix all ingredients in an ice-filled Boston shaker and “roll” until cold. To roll a drink simply pour the liquid including the ice from one container to the other. Repeat for approximately seven to eight times, then strain into your pre-chilled glass over fresh ice cubes.

Garnish: Beef Jerky and a rim of smoky salt 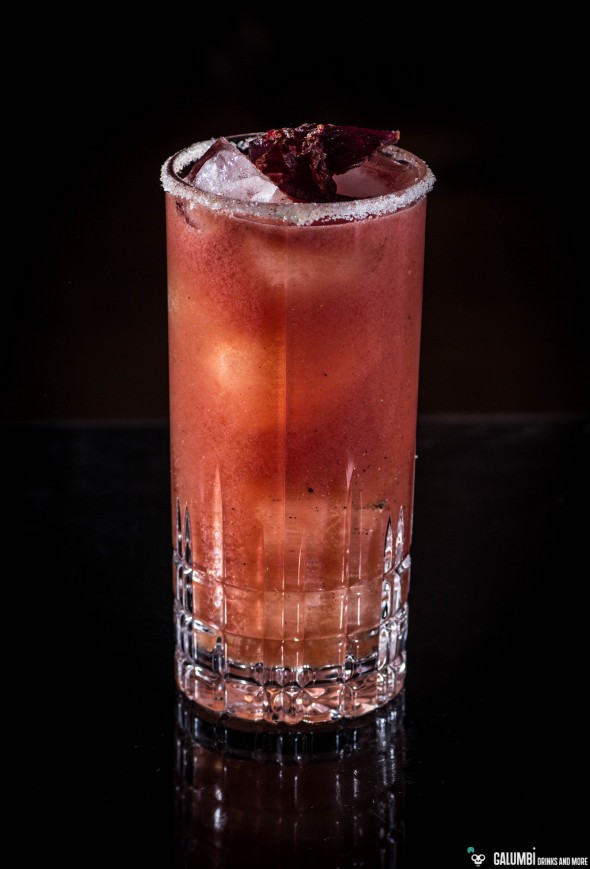 Preparation: Mix all ingredients in an ice-filled Boston shaker and “roll” until cold. To roll a drink simply pour the liquid including the ice from one container to the other. Repeat for approximately seven to eight times, then strain into your pre-chilled glass filled with an ice sphere. 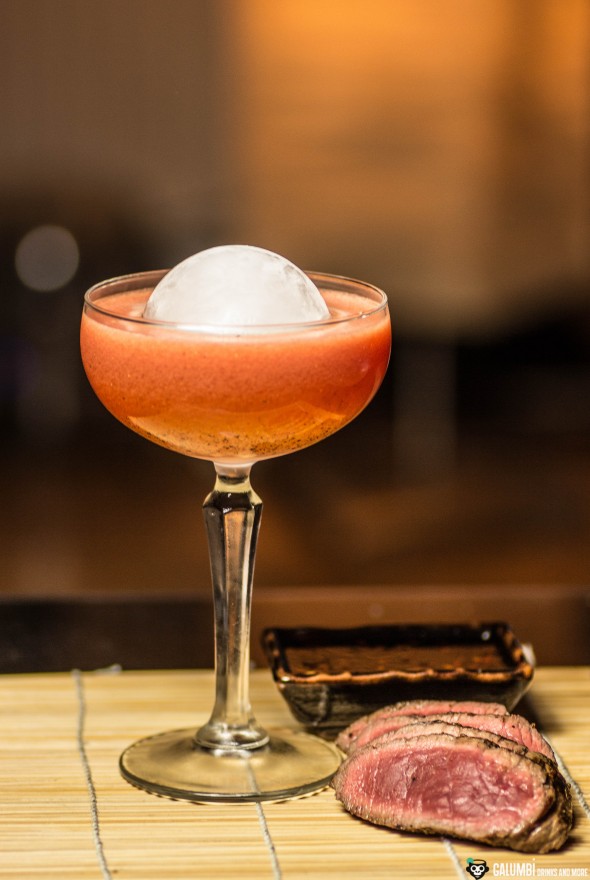 Buying sources: Many ingredients can most likely be found in well-stocked supermarkets. For Shōchū, a visit to a specialized trader may be necessary. Garam Masala, Shichimi tōgarashi and Wasabi can be found in Asian Food markets.