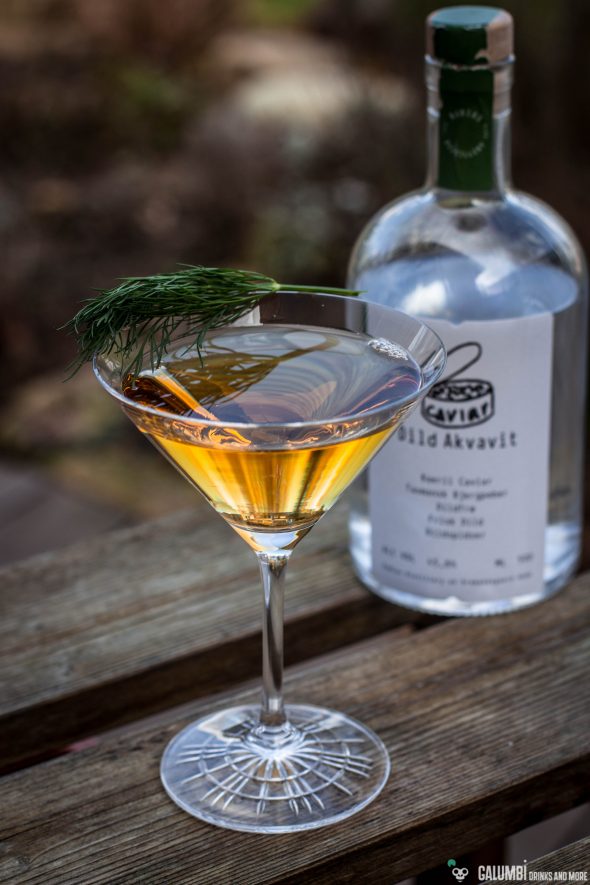 In all my years of blogging, I have of course also tried rather odd or quirky spirits. Most of the time they belong to categories far away from what you’re used to (like baijiu for example), but that’s not necessarily the case, as today’s article will surely show. Because for the bottle in focus today, a visit to a country neighbouring Germany is enough: Denmark. (provided test product)*

Admittedly, the Scandinavian cultural area holds one or two culinary challenges for outsiders (or rather, the ignorant, depending on your point of view). Whether you take the Icelandic Hákarl (fermented Greenland shark), the Svið (blackened seared sheep’s head), which also comes from there, or the Swedish Surströmming as an example (herring preserved by lactic acid fermentation – to this day the olfactory worst thing I’ve ever been served – and I’ve also tried the two previously mentioned Icelandic specialties), the Nordic countries are not necessarily perceived by everyone as the first address in culinary terms. (Of course, I have now deliberately presented this in a polarizing way, because in reality a lively and innovative top gastronomy has also long since emerged there. All I wanted to state is that the far north is always good for some odd flavours).

However, fortunately there are other, typically Nordic flavors: dill, for example, or caviar – and aquavit, of course. And that brings us to today’s spirit, the Dild Akvavit from the Radius Distillery in the small Danish town of Præstø in Sjælland. That’s where this truly exceptional distillate is produced. The distillery is run by the two master distillers Kristian and Flemming and the landowner and apple enthusiast August since 2016. In addition to gin, the products produced include apple brandies, liqueurs and aquavit (or akvavit). 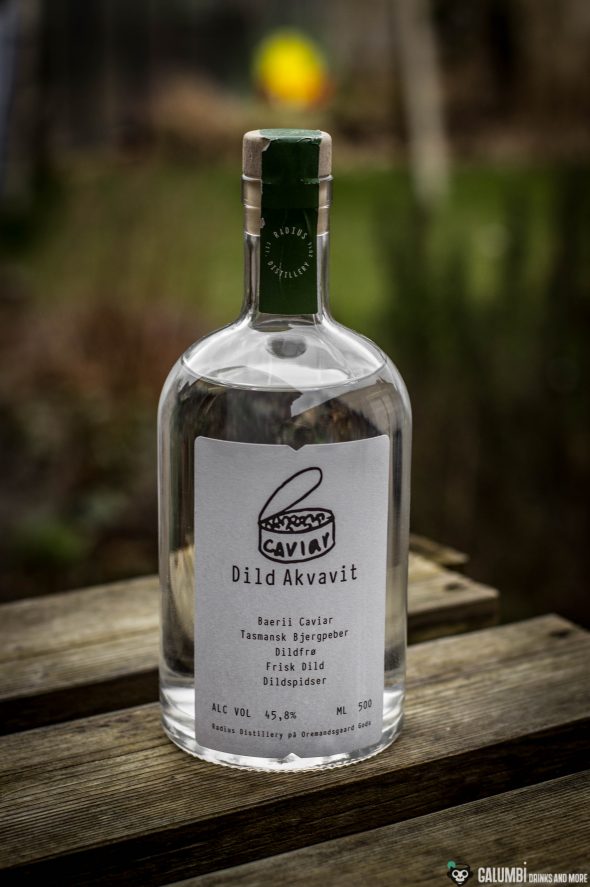 For the Dild Akvavit, they now use a really exciting and absolutely innovative composition of “botanicals”: First of all “Baerii Caviar”, which is the caviar of the Siberian sturgeon, then Tasmanian mountain pepper, dill seeds, fresh dill and fresh dill tips. Finally, bottled at 45.8% vol. Well, if that’s not cool? I must confess, I really have a weakness for such unusual things and accordingly I was excited to see what I could expect from this aquavit.

Aroma: The aroma of this Aquavit is nothing less than remarkable! In fact, you get exactly what you are promised here – and in a really great way. The nose is immediately marked by a dichotomy of dill and caviar. And both harmonize just perfectly with each other, nothing displaces the other here. The aquavit itself remains in the background, showing minimal associations of anise and pine needles, but these may also be part of the authentic dill character. Salt tones fly along, distant hints of lemon can also be found.

Taste: What an awesome aquavit! I find the Dild Akvavit really quite excellent, the dill and caviar are simply compelling and fully characterizing on the palate as well. Umami wherever you taste! Salty-maritime notes also combine on the palate with the dill, as if they were made for each other (they are, somehow). I can also pick out hints of anise here after a while.

On the producer’s website, this aquavit is recommended as a suitable companion to a herring sandwich, which is certainly absolutely true. And in general, it’s almost certainly a match in all sorts of savory drink ideas, such as a sort of Nordic Bloody Mary version. This extraordinary distillate can also shine in a (preferably dirty) martini (for the brave ones even with herring marinade), but I still wanted to go a bit further than that and break out of the savory corner a bit. With such special spirits, after all, the real challenge behind the bar is basically not to slay the unique character and, moreover, to use it appropriately in a drink where it creates an overall picture as a component that still makes it recognizable, but is also just more than the sum of its parts. And that is really often not an easy task. Unfortunately, I very often see recipes that combine spirits with the very ingredient that is itself a central component of the spirit. This sometimes annoys me a bit, because it shows that there is often a wrong understanding of flavor composition: if I were to shake the Dild Aquavit with dill in a smash, for example, I might have a delicious cocktail, but the shaken dill would probably overpower the genuine dill flavors of the Dild Aquavit in such a way that I could simply have used another, “regular” Aquavit for it. 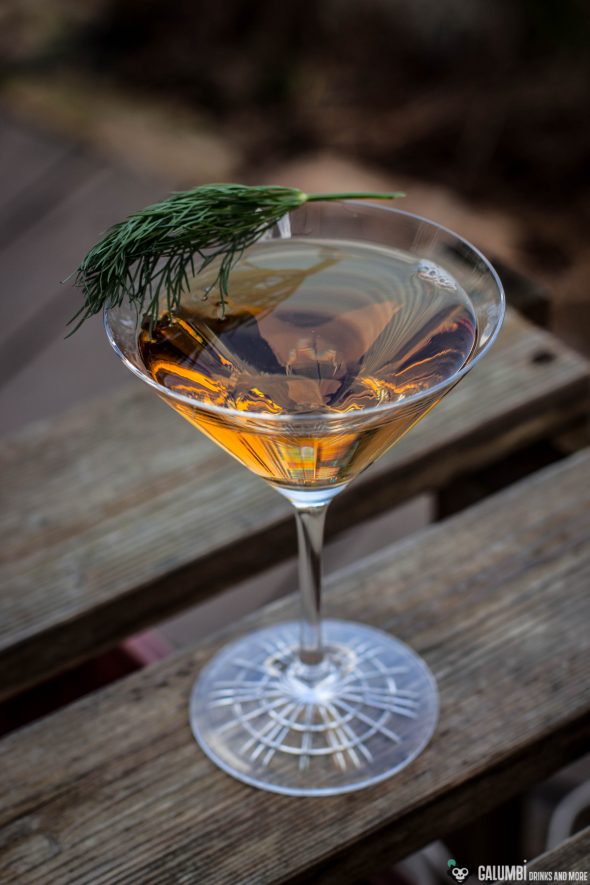 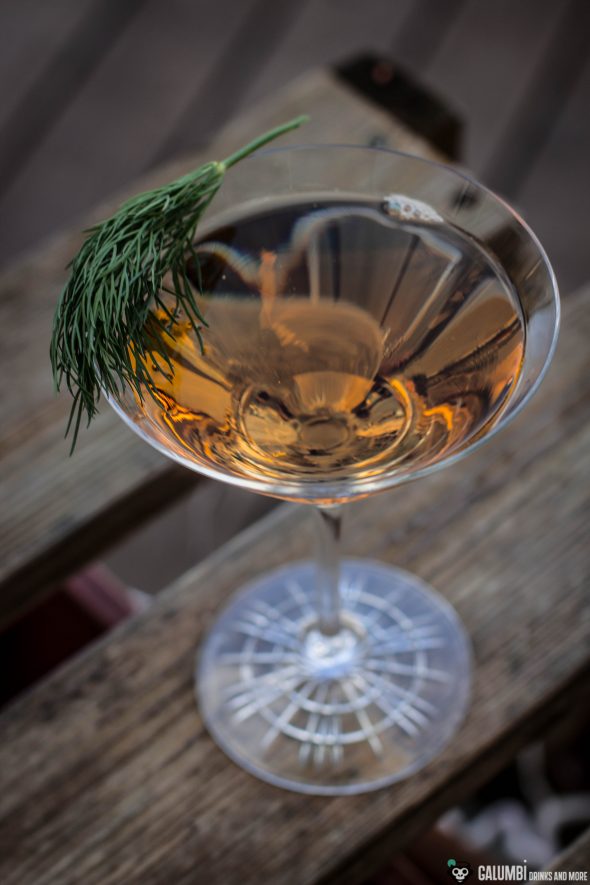 No, the Dild Akvavit (I simply use both spellings in this article) should be able to assert and prove itself. And this is basically where I ended up with a really rather unusual drink, namely a beer cocktail. My drink idea was inspired by the Good for the Gander, but comes a bit modified. In addition to changing the proportions, I added a minimal pinch of salt to the drink (really only a minimal pinch, it’s enough to put a tiny amount between two fingertips in the mixing glass), which lifts the caviar notes in particular to a really new level. The drink goes by the name Dilly Dally.

a tiny pinch of salt (see above)

Preparation: First add all ingredients without ice into a mixing glass and stir for about 30 seconds to get the carbonation out of the IPA. Then add ice, stir until cold and strain into the pre-chilled glass. 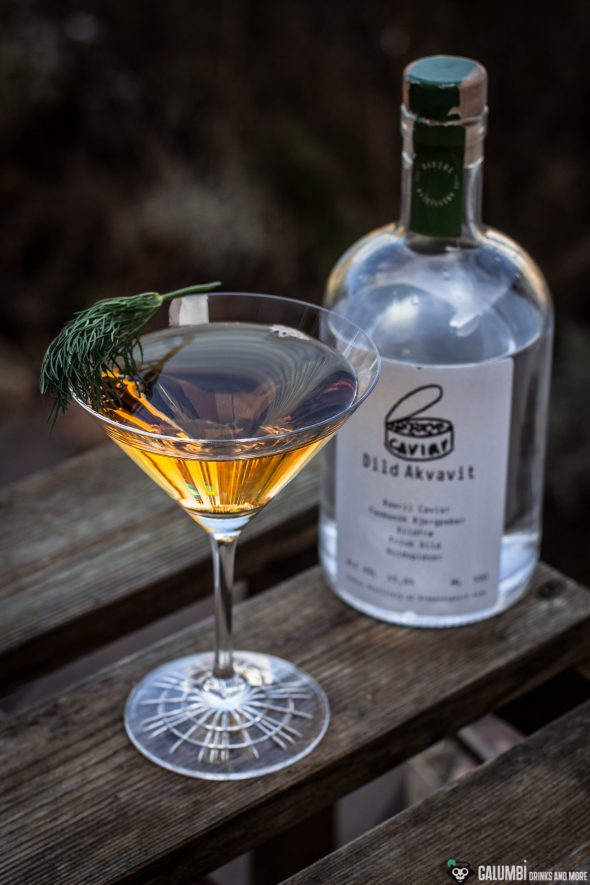