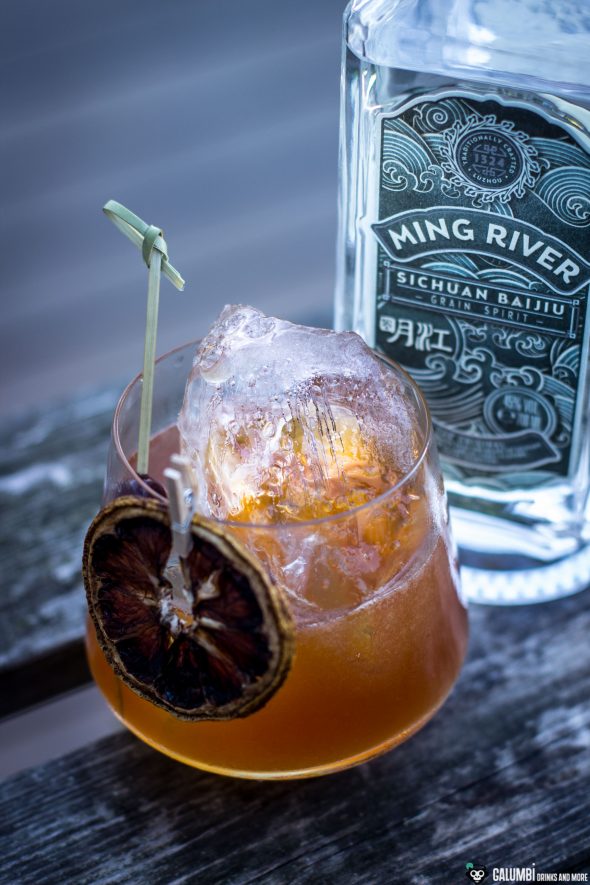 Today I have a tough row to hoe – in several respects. Because today I’m writing about a product that belongs to a category which I have not dealt with here until now, which is still relatively unknown in Europe and, on top of that, represents a real challenge to me. And the topic “Baijiu” is gigantic (while my first contact with Baijiu was gigantically bad). (provided test product)*

First, I want to make clear that I cannot give an encyclopedically detailed introduction to the topic in this article. It would simply be too comprehensive and too overwhelming in the context of this article – especially since I will probably rarely review Baijius here in the future (although it would certainly be desirable for this genre of spirits to become more widespread in Europe). So I hope you will also be satisfied with a rather short outline of the Baijiu horizon.

Baijiu (白酒) literally means “white alcohol” or simply “schnapps”. It has probably been produced in China since the 12th century, although of course a historical development has changed the character of Baijiu to this day. It is made from water, grain and “Qu” (麴). Qu is a kind of pressed grain that contributes to the emergence of microorganisms necessary for fermentation (yeast, bacteria). Similar to the sometimes centuries-old yeast strains of western distilleries, Chinese baijiu distilleries also maintain their own Qu recipes, which are closely related to the environment and the surrounding climate. The grain base, on the other hand, is conceivable in all directions, but the majority of Baijius is made from sorghum millet (or milo). After fermentation, the mash is finally distilled in traditional Chinese distillation kettles, which are most comparable to pot stills (see illustration). 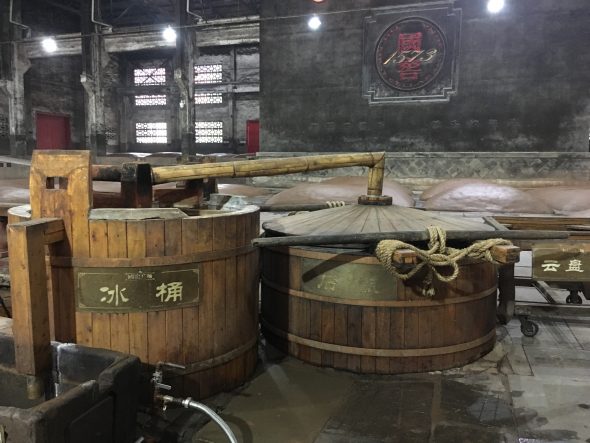 Biajiu primarily exists in four different categories: Strong aroma baijiu (浓香型白酒), light aroma baijiu (清香型白酒), sauce aroma baijiu (酱香型) and rice aroma baijiu (米香型). This sounds strange to the western ear at first, but makes sense if you compare the flavors with each other and collect your own olfactory and taste experiences here. However, I cannot go into that much detail here today because I just want to review a specific bottle that belongs to the strong aroma baijiu group, which is also the largest or most common group. It comes from the Chinese province of Sichuan (which might be known to many for its infernally hot cuisine). Well, and here I also come back to my opening remark regarding my “gigantically bad” first contact:

At that time I was still very young (18 or 19 years old – for those of you living in the US: In most European countries, Germany included, it is completely legal to drink booze when you are 18) – I am not quite sure whether it was still in the last or already in this millennium. Basically, I had no idea at all concerning spirits, drinking culture or other backgrounds of the matter. My father brought a bottle of “schnapps” with him from a holiday trip to China. When I was invited on a birthday of a friend, my father pressed the slightly exotic looking bottle into my hand and only said: “Take it with you, maybe somebody wants to drink it. We didn’t like it so much” and just grinned. Therefore, I took the bottle with me – and it almost blew up the party. Whoever moved his nose even slightly into the direction of the opened bottle, immediately screwed up his face. The few that were “courageous” enough to take a sip of it (including me), had to hold back nausea and also all mixing attempts with Cola, Fanta and the like (which we thought were great things to mix booze with at that time) all ended in a taste-olfactory fiasco. Unfortunately, I am not entirely sure what the name of this stuff was. I guess it was called “Xi Feng Yu” – or something similar. Anyway, it cost almost nothing – and tasted the same.

Four years ago I was in China myself for the first time and tried Baijius neat and also in cocktails and was very surprised that this liquor category indeed also knows how to please. However, the premium market is also booming in China, a country with a lot of demand for representative attitudes, so many qualities are available there. 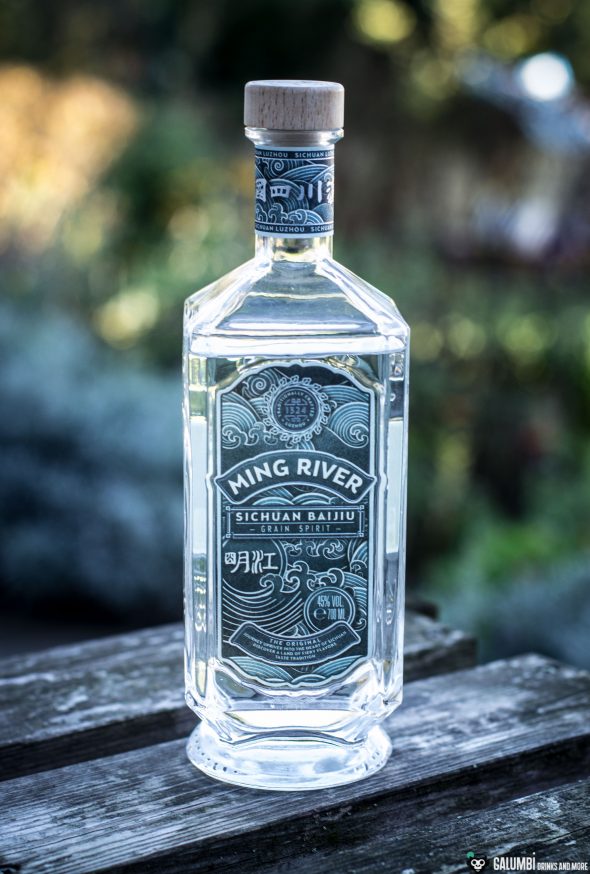 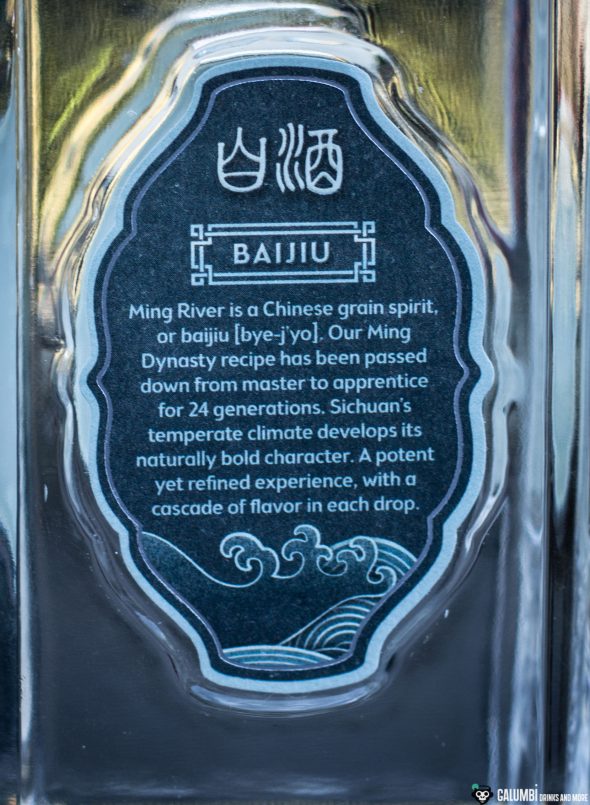 With the Ming River Sichuan Baijiu, the American Derek Sandhaus (a studied philosopher) and his German colleague and sinologist Matthias Heger are now attempting to make a strong aroma baijiu (of all things!) popular in the West. (By the way, I myself attended a seminar on Chinese philosophy once during my studies and was confronted with a wild mixture of philosophical fragments and Chinese ideographs. The topic seemed very exotic and interesting to me at that time, but also connected with a tremendous linguistic effort. I have never pursued it any further, but I am amused to note that this way can obviously also lead to the distribution of spirits for some people). For about 35 to 40 Euros you can convince yourself of the quality of this drop.

The Ming River Sichuan Baijiu comes from China’s oldest distillery continuously producing Baijiu: Luzhou Laojiao. Baijiu has been produced there since 1573 – an enormous period of time! The mash for the Ming River ferments for two months in clay pits before finally being distilled. Then, the Baijiu matures for “up to” two years in clay pots and is then blended with other batches for the final Baijiu. Finally, it is bottled with an impressive ABV of 45%. 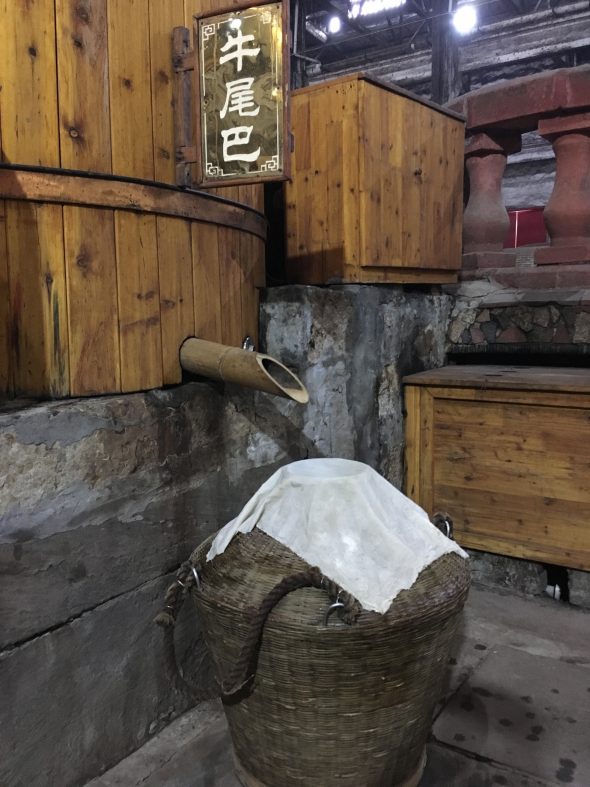 Well, how does the Ming River Sichuan Baijiu perform in the tasting? I had to take my courage, because I still cannot approach this category completely unafraid. 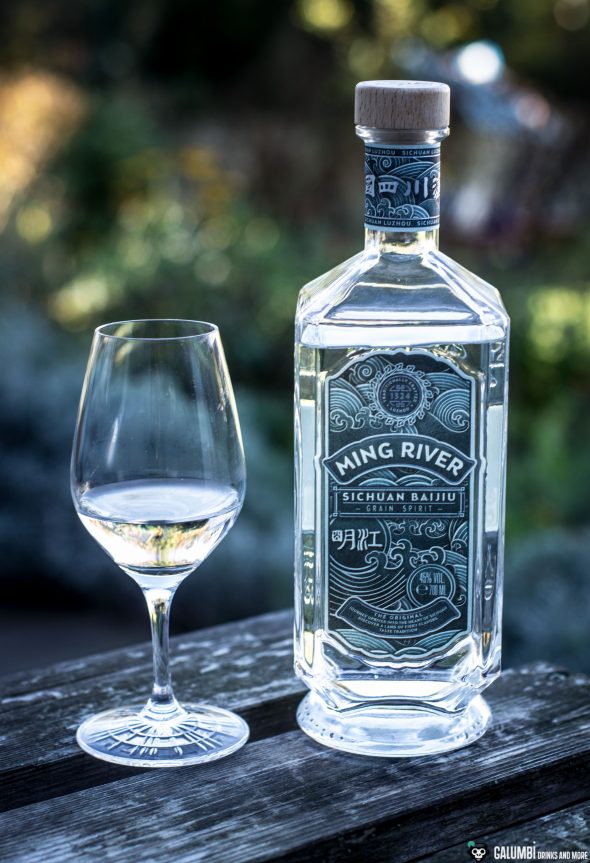 Aroma: this Baijiu has an incredibly intense, pervading aroma, in this respect it honors the reputation of this spirits genre. The amazing thing is: it is by no means unpleasant. This may sound a bit jovial, but it is by no means meant that way. Against the background of my personal experiences with Baijiu, this way to put it is simply an expression of a positive surprise. Intense, ripe pineapple is the first association that comes to my mind. Behind there is a potpourri of fermented, bright fruits. Nuances of earthy tones reminiscent of tuber vegetables are also present. I even have to think of a slightly menthol-like note and actually mature cheese, tending a little towards a Parmesan. The nose is very complex and there is a lot to discover here. The Ming River Baijiu remains expressive throughout.

Taste: Again incredibly present and voluminous with a whole carload of facets. Pineapple, spices, lentil flour, earthy hints, even a minimal smoke and mineral notes draw a taste picture that you will definitely not find in any other spirit. On the palate, my thought of menthol is confirmed. Although this is not the central taste component, it is also present here. Lightly fermented nuances are also not to be missed. Intense and impressive, no question at all. Not everyone may like that, but if you are looking for something really impressive – and that in the truest sense of the word – I can absolutely recommend this Baijiu to you.

Now is the Ming River Sichuan Baijiu a spirit for everyone? Pretty sure: no! This Baijiu must also be approached with a certain open-mindedness, because the aromas will carry you away anyway and hit you in their intensity. But: the Ming River Sichuan Baijiu is a really successful and yet very gentle representative of the strong aroma category. In a way, he is actually an ideal “ambassador” of his genre, because even if he remains a strong aroma baijiu, of course, he also knows how to please a Western taste expectation – if it doesn’t remain too stubborn. But if you like powerful Rhum Agricoles, Clairins or such spirits, the Ming River Sichaun Baijiu is probably the right place for you.

Well, there’s still the topic of cocktails: Even though China doesn’t have a genuine cocktail tradition, the bar business is booming and more and more bartenders are experimenting with baijiu, which is traditionally served neat as part of a meal. Nevertheless, you have to be clear about this: a strong aroma baijiu doesn’t think about hiding. Here we are dealing with a liquid “stage hog” that tolerates a few side dancers, but in the end is the first and last to bow to the audience. And in order for such a show of aromas to work, the side dancers have to be able to keep up, of course. 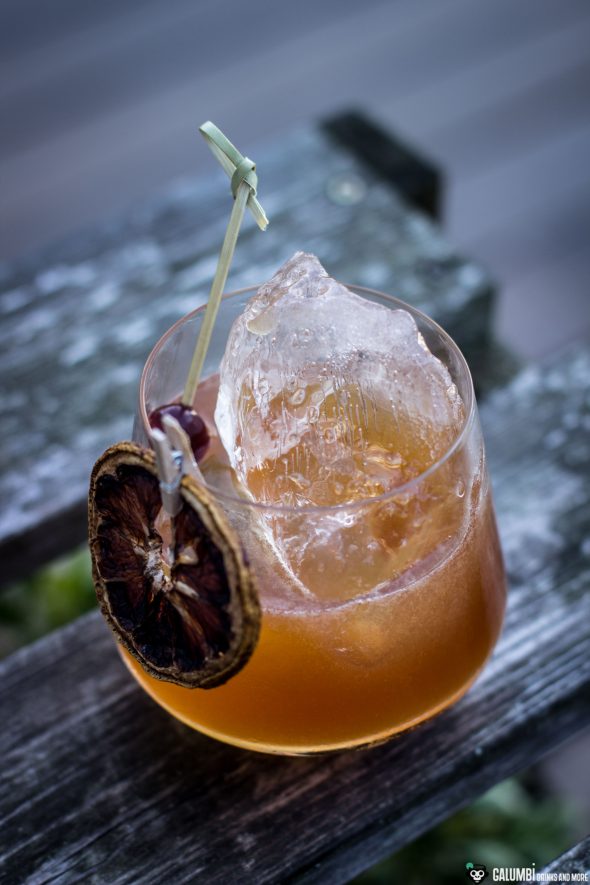 That’s why I’ve come up with a drink (and I’m also very fond of it) that takes this background into account. The “Crossing the Silk Road” is supposed to take the connoisseur on an aromatic-spicy journey, exotic and long-lasting with a real Baijiu experience. I took a sour with lemon juice as a base and finally added some Elixir China, two bar spoons green Chartreuse and a bar spoon of Pimento dram (which especially comes through in the finish). Rounded off with Ginger Bitters and a nuance of Peychauds, the journey along the Silk Road can begin. And because it is well known that the silk road also led over ice-covered peaks, such a “mountain” also rests in the cocktail glass when it is served. 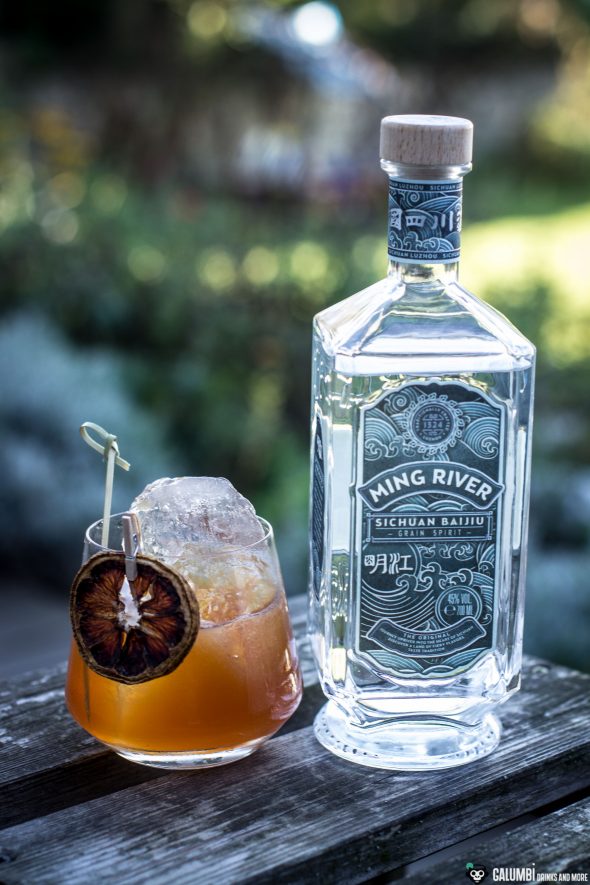 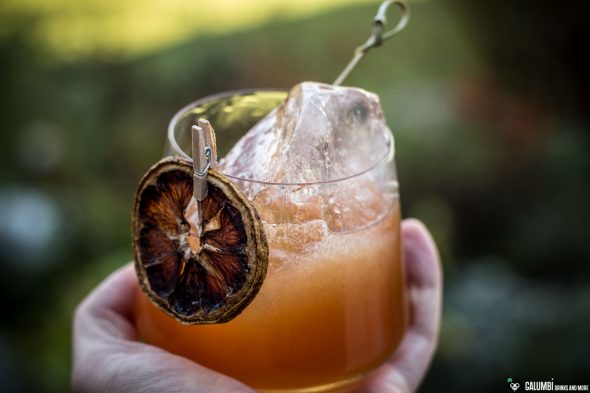 Preparation: Shake all ingredients vigorously on ice and pour into a glass filled with a large “iceberg”-style lump of ice. 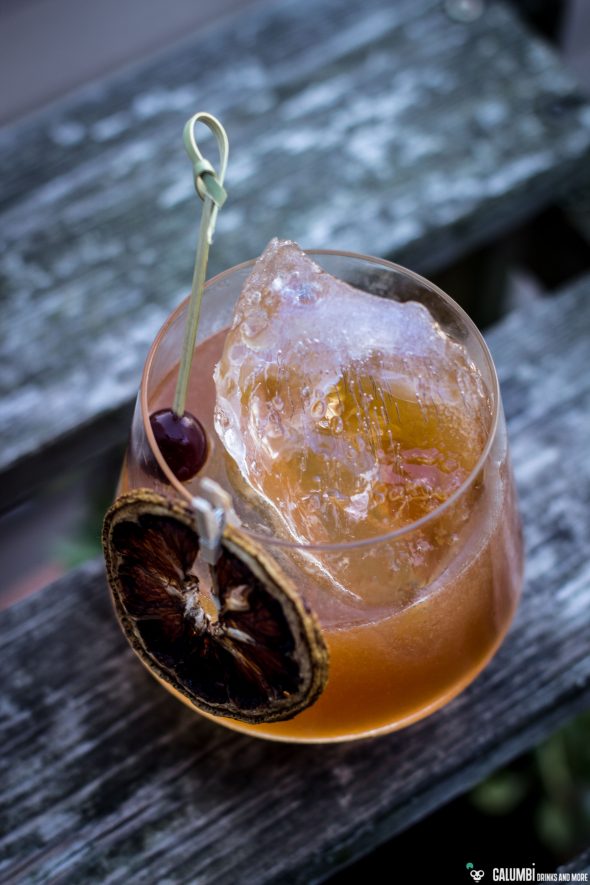 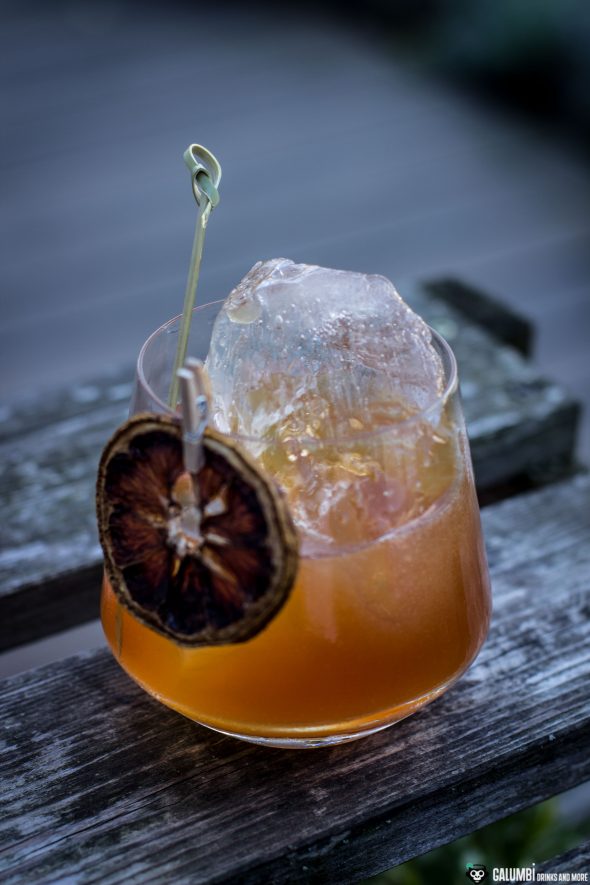