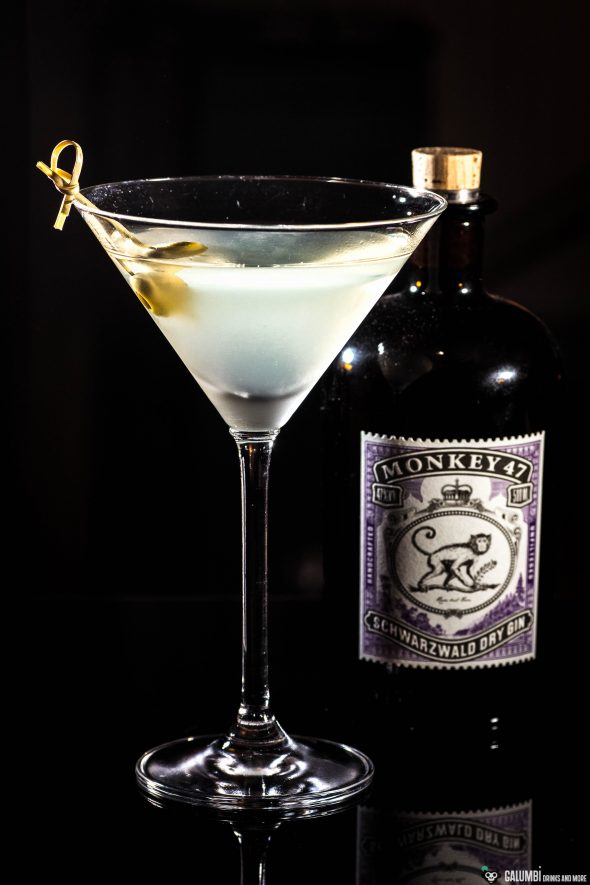 By now, Galumbi – Drinks & More is online for almost one and a half year and maybe you’re wondering why there has been no article about a Martini so far. This is simply because I had not really been in the right mood to write about the “King of Cocktails”, because such an article would have to face the full burden of the importance of this cocktail on its virtual shoulders. But today is the day, though I simply decided to leave a lot of things out.

By that I mean actually a list of countless myths of origin, a compendium of anecdotes or any accurate historical discussion. Believe it or not, there are whole books out there that have been written just about this cocktail and it seems to me that there is actually more than one real historian who seriously is eager to collect all knowledge about this drink that is possible. So, whether the drink is descended from the Martinez or not and whether Churchill should better have used vermouth is not mine to decide or to answer. Instead, I will try to give you my own and personal story about this cocktail, which actually has been one of my first “awakening experiences” for my cocktail enthusiasm. (To everyone who wants to be more involved with the historical matter, I can only recommend an extensive online research. If in doubt, the article on Wikipedia will be sufficient for a brief overview.)

First, I have to say something about the situation in my home country. In Germany, only few people are that familiar with this cocktail as for instance Americans might think. In fact, the word “Martini” will more likely trigger associations of the Italian vermouth producer rather than make the people think about the “King of Cocktails”. This leads to funny situations sometimes: I’ve already experienced people decorating their Italian vermouth with an olive in a martini glass and claiming “That’s the way it has to be served!” And if you order a Martini at a regular pub, you should not be surprised if you get a small glass of vermouth.

Well, my personal approach to the Martini cocktail came from two different ways. The first one has been Chris McMillian, who actually fired up my cocktail enthusiasm with his wonderful Youtube-videos (unfortunately the quality is no longer up to date, but I have added the video below anyway). He taught me that James Bond basically was wrong and that there are many different variations of Martinis and that – of course – Gin Martini has to be stirred and Vodka Martini has to be shaken. Secondly, I came upon the drink by a German news site (Spiegel online), where Werner Theurich used to publish small videos in a series called “Einfach Stil” (“simply style”). In one of those videos he had a Martini at the just young Bar Le Lion de Paris in Hamburg. Mr. Theurich visited Mr. Mayer in his bar and ordered a “perfect” Martini. While serving the drink, Mr. Mayer cited a famous poem by Dorothy Parker about this cocktail, which is definitely one of the standard anecdotes that are found in connection with the Martini very often. Well, and because an article about the Martini perhaps is not complete without a classic anecdote, I decided to go at least for this one here.

“I like to have a martini,
Two at the very most.
After three I’m under the table,
after four I’m under my host. “

So it should become clear that a martini can pretty quickly throw you off track. Depending on what you’re up to on that evening.

Inspired by the videos I was looking for some good gins (which was not easy back then in Germany. You had to be very lucky if you could find a Tanqueray in large supermarkets, usually a Bombay Sapphire (in the 40% version) was the best you could find. Today that has changed more into the opposite since now there are sometimes entire rows of shelves full of gins).

You might have already noticed: For me a Martini is naturally a gin Martini and not one made with vodka. And well, what can I say? I was immediately impressed by the clear, fresh, floral-herbaceous taste revelation of this cocktail. Therefore I’d like to show you my favorite martini as I usually like to drink it – and yes, I like to drink it with a neat amount of vermouth (and, quite straightforward, with Noilly Prat).

(The drink in the picture is clouded a little by the flashlight trapped inside of the liquid and also due to the coating of ice on the outside of the glass. In fact, the cocktail is clear and transparent. However, I still found that the picture looks very pretty.)

Preparation: Stir all ingredients in a mixing glass over ice until cold and strain into your pre-chilled glass.

Buying sources: You can find Monkey 47 Gin in many supermarkets throughout Germany. If you’re looking for it from abroad, you might have to consider ordering it online.