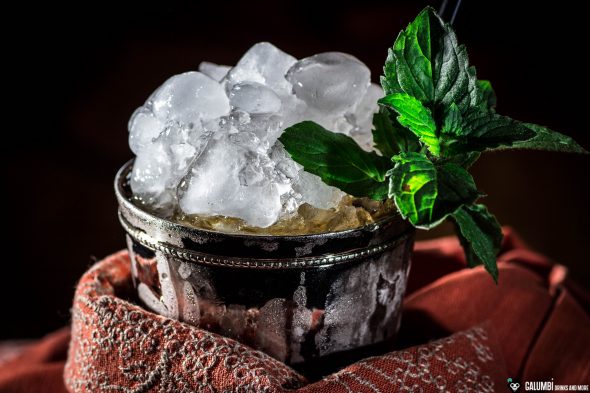 Ok, now the time has come to write about one of my very favorite cocktails of all time. It constantly competes with the Negroni  in a head-to-head race for the title “My personal No.1”. Eventually with its very special flair and that certain “more” that the preparation requires it might be that one little step ahead…but finally it’s too close to call. I am talking about the Mint Julep, a cocktail incredibly much has been written and said about and one that is far too unknown to many people in europe.

Writing an article about the Mint Julep can easily become a mammoth task, as there is really endlessly much to say about the drink. Its countless variations and its original context reach far back into history and so it is no surprise that a vast number of anecdotes about this cocktail exists. To avoid this mammoth task I want to focus on my personal approach and my personal favorite recipe of the Mint Julep. Of course that means to write an article that cannot claim to be encyclopedic at all. But of course there is a bit of room for some small explanations and some general information.

First I’d like to start the way almost everyone starts when talking or writing about this drink by telling you something about the word Julep and where it comes from. The term Julep goes back to an Oriental term that has also something to do with the nature of the cocktail. In the Persian language there is a term called Gulab, (called Julab in Arabian) which simply refers to rose water, a kind of syrup which is also often served in drinks or in combination with tea and chopped nuts. Well, such a kind of “flavored syrup” in some sense is also represented in a Julep cocktail in the form of a syrup or another source of sugar (such as jam as for example in the Stagger Lee Julep or Falernum like in a Pirates’ Julep) which is then combined with a spirit and fresh herbs (mint being the classic one). The ancient form of today’s Mint Julep has probably developed during the 18th century in the southern states of the United States or already before the nation was founded on former colonial territory. However, the drink spread like wildfire through the whole country in the early 19th century where it quickly became one of the most popular drinks of all. Has it once been a settler’s beverage they sometimes even had for breakfast, the drink emancipated over time and in the course of decades the mint julep evolved into what it often is today, or what it at least can be: simply one of the greatest cocktails of all time. 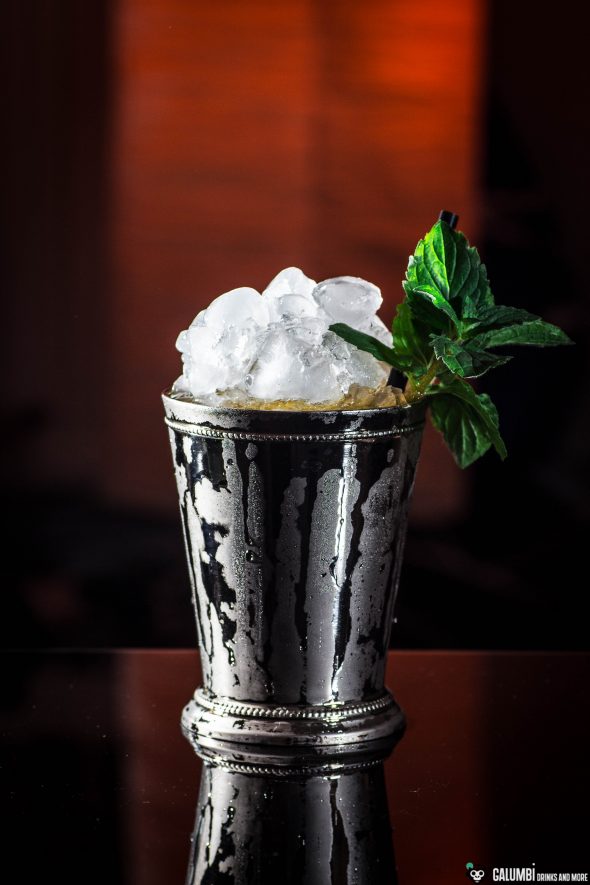 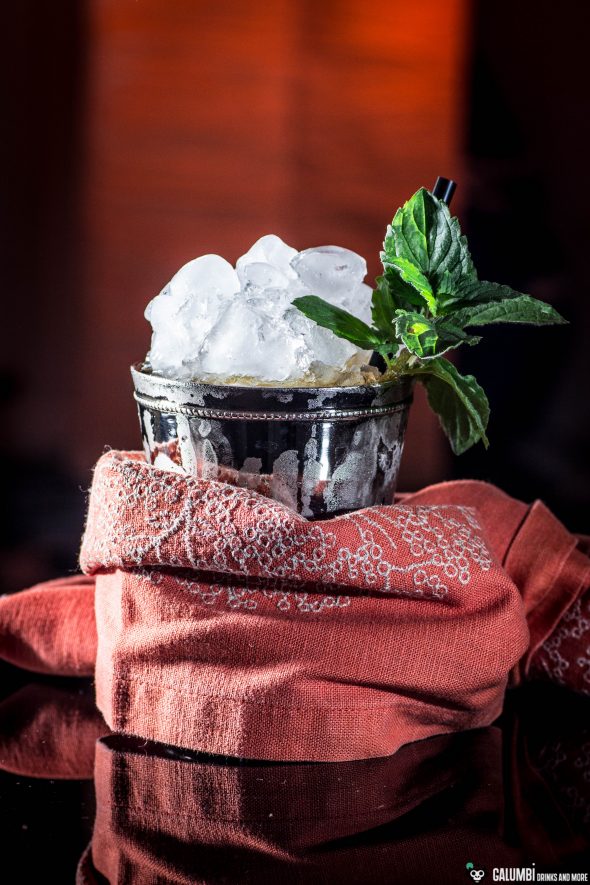 “What the Martini was to the 20th century, the Mint Julep was to the 19th century.” This statement describes quite well how big the historical role of the Mint Julep for the American cocktail history has been. It was said by the man by whom I first came upon the Mint Julep, the American bartender and cocktail historian Chris McMillian. Chris’ sphere of action is the Mecca of the American cocktail culture, New Orleans, where he has already worked in several renowned bars and now runs his own bar called Revel. Besides his work in a bar he is also holding cocktail seminars throughout the whole country. For me, he remains something like the epitome of classic Southern bartenders. Therefore I would never dream of questioning his expertise when it comes to the Mint Julep and I have to say that after I’ve tried many methods of preparing a Mint Julep, Chris’ version is by far the best.

I usually write down the recipe of the cocktail at the end of the article, but today I already put it here because it needs some additional explanation.

Preparation: First add 1 bar spoon of sugar syrup and the sprigs of mint into your silver cup and cautiously muddle them with your muddler without shredding the leaves. They should be pressed only slightly to release their essential oils, try to muddle against the interior of the cup and to cover all of the interior surface. Then fill up the silver cup with crushed ice and form a cap of ice with your hands on top of the drink. Now slowly add the Bourbon and let it trickle through the ice until there is about half a centimeter left to the top edge of the cup. Then again add some sugar syrup and stop before it would overspill. Garnish with the leftover sprig of mint and put a short straw between the mint.

Garnish: sprig of mint and serve it with an Irish linen napkin

In the southern states of the US you can easily get into real debates about the adequate way to prepare a Mint Julep. In Europe this is of course rarely the case because the drink is not famous enough. Yet, I do read very often that you should remove the mint leaves from the Julep after a few minutes to not overpower the spirit too much, or even in the worst case to shred it with granulated sugar. I do none of that because of reasons that are related in particular to the way how to make the drink. In 99% of cocktail recipes it’s all about creating an ideal homogeneous and reliable mixture. Who wants to have his or her Whiskey Sour tasting sweet at the bottom and sour at the top? Now, the Mint Julep is a drink where you might want exactly something like that. Mr. McMillian makes a very convincing point in this matter when he understands the Mint Julep as a drink that does not promise a calculable taste with each sip but offers a slightly different experience every time you drink from your cocktail. Thus the drink is gaining a multidimensionality that works fantastic. Sometimes the Bourbon is very present, then it is sweeter, sometimes it is less sweet, then there is subtle mint and sometimes the mint is very present and fresh. The idea is also that the drink is gaining a certain extent in intensity in a downward direction, because there is the largest concentration of the aromatic mixture of mint leaves, syrup and bourbon at the bottom of the cup. Therefore you should definitely also use a very short straw to not directly drink from the bottom but to get the most “rewarding” part at the end. The fragrant mint in front of your nose will tempt you every time you go for a sip… quite wonderful! The feeling of drinking such a Mint Julep is hard to describe, you just have to experience it yourself.

Chris McMillian is often citing Joshua Soule Smith during the preparation of a Mint Julep. It it is a text that was published in the 1890s in the Lexington Herald. Chris knows the text by heart (Kudos for that!) but I do not. Nevertheless, for me this quote is the most suitable anecdote to this great cocktail, even if the preparation differs in some ways from the one Christ relies on. It is absolutely worth reading it since it’s a really beautiful piece of American Alcoholic literature.

„Then comes the zenith of man’s pleasure. Then comes the julep – the mint julep. Who has not tasted one has lived in vain. The honey of Hymettus brought no such solace to the soul; the nectar of the Gods is tame beside it. It is the very dream of drinks, the vision of sweet quaffings.

The Bourbon and the mint are lovers. In the same land they live, on the same food they are fostered. The mint dips infant leaf into the same stream that makes The Bourbon what it is. The corn grows in the level lands through which small streams meander. By the brook-side the mint grows. As the little wavelets pass, they glide up to kiss the feet of the growing mint, and the mint bends to salute them. Gracious and kind it is, living only for the sake of others. Like a woman’s heart it gives its sweetest aroma when bruised. Among the first to greet the spring, it comes. Beside gurgling brooks that make music in the fields, it lives and thrives. When the bluegrass begins to shoot its gentle sprays towards the sun, mint comes, and its sweetest soul drinks at the crystal brook. It is virgin then. But soon it must be married to old Bourbon. His great heart, his warmth of temperament, and that affinity which no one understands, demands the wedding.

How shall it be? Take from the cold spring some water, pure as angels are; mix it with sugar till it seems like oil. Then take a glass and crush your mint within it with a spoon – crush it around the borders of the glass and leave no place untouched. Then throw the mint away – it is the sacrifice. Fill with cracked ice the glass; pour in the quantity of Bourbon which you want. It trickles slowly through the ice. Let it have time to cool, then pour your sugared water over it. No spoon is needed; no stirring allowed- just let it stand a moment. Then around the brim place sprigs of mint, so that the one who drinks may find the taste and odor at one draft.

Then when it is made, sip it slowly. August suns are shining, the breath of the south wind is upon you. It is fragrant cold and sweet – it is seductive. No maidens kiss is tenderer or more refreshing, no maidens touch could be more passionate. Sip it and dream-it is a dream itself. No other land can give you so much sweet solace for your cares; no other liquor soothes you in melancholy days. Sip it and say there is no solace for the soul, no tonic for the body like old Bourbon whiskey.“ 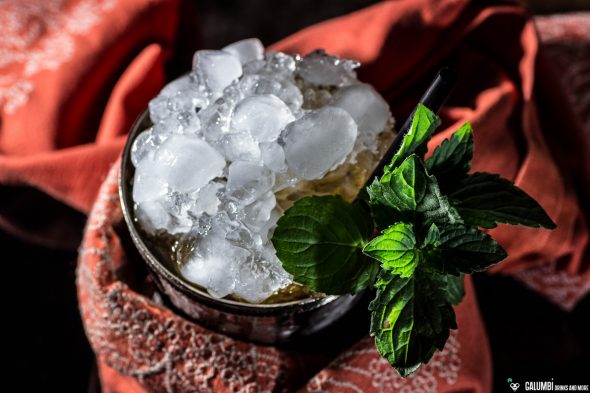 Oh, I almost forgot it: There is also another quite interesting version of the Mint Julep which goes back to “Professor” Jerry Thomas. Whiskey has not always been the only common spirit to use in a Julep, gin or brandy were also used quite often. Jerry Thomas relies on cognac and hast left us an interesting recipe in his book “How to Mix Drinks: Or, The Bon-vivant’s Companion” from 1862. It is a Julep “that is fit for an emperor”.

I have – even without a silver cup (also for photographic reasons) – prepared an adaptation from Jerry Thomas’ recipe taken from the German book “Cocktailian – Das Handbuch der Bar”. Here it is (only changed to a minimum extent):

Preparation: clap mint between your hands briefly and let them go in the glass together with cognac and peach liqueur for about 5 minutes, occasionally press gently with your bar spoon. Then remove the mint (I always leave it in despite every objection), fill with crushed ice and stir until the glass or silver cup turns foggy on the outside. Again fill up with crushed ice and sprinkle the rum on top.

Garnish: mint and fruits of the season 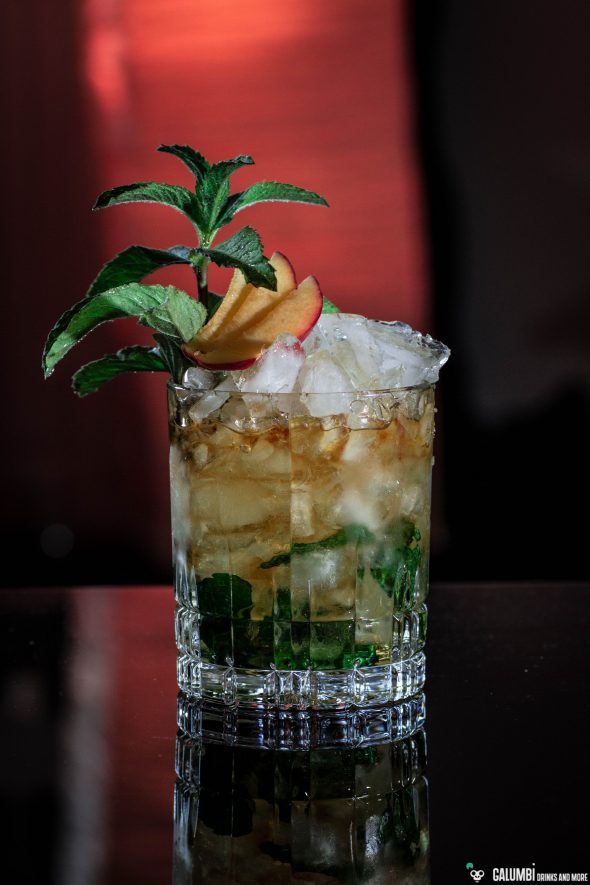 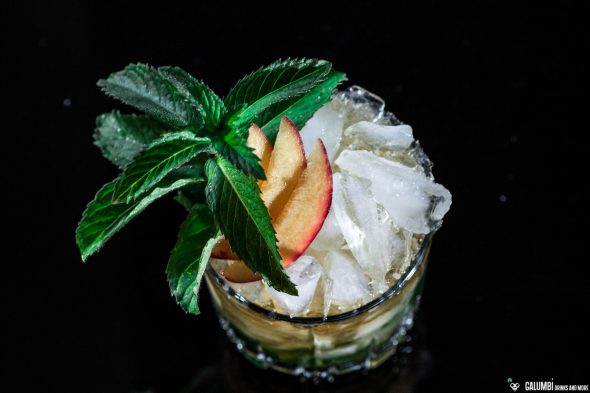 Buying sources: I like to buy my fresh mint in Turkish grocery stores, the rest of the ingredients can be found – depending on which Bourbon you want to use – in supermarkets, at specialized retailers or online.