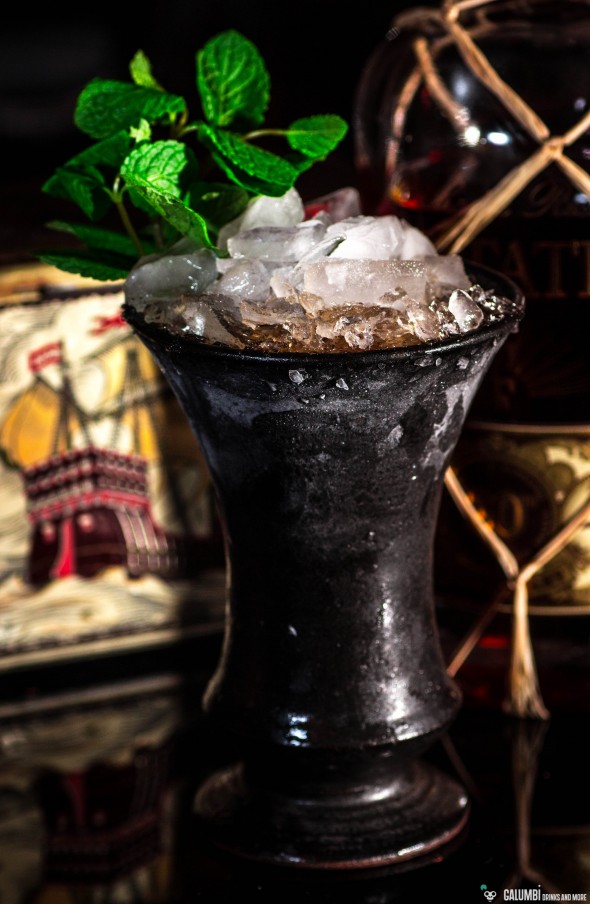 I have found this drink in the highly recommendable Cocktail guide “Cocktailian – Das Handbuch der Bar” and it represents an unusual form of a Julep. An unusually good!

Juleps are something like the great grandfathers of cocktail culture that became popular in the southern United States in the 18th century. With their minty, refreshing flavors, they were served especially in the morning, a convention I would definitely not recommend today. The word “Julep” goes back to the original Arabic word Julab, which describes a kind of sweetened rose water. Now, while classically especially the Mint- or Whiskey Julep came to fame, this variant is a modern interpretation of Cocktailian-authors Helmut Adam, Jens Hasenbein and Bastian Heuser.

The base spirit of the Pirate’s Julep is a good Demerara rum (you can also take another good rum). You want to use a high quality product, since the Julep is a cocktail that relies strongly on the natural taste of its base spirit. In addition to that base spirit the drink has some Falernum in it, a not always easy to get Caribbean rum syrup (sometimes syrup liqueur) on the basis of lime and Christmas spices like cloves, almonds and ginger. Alongside with the complexity of Angostura the result is a wonderfully refreshing rum cocktail, which is – with its balanced flavors – located somewhere between freshness and a wide range of spice. The Cocktailian-authors describe the drinking pleasure almost as having found your own treasure island. I can only agree!

6cl brown Demerara Rum (it also works wonderfully with another high-quality rum that you like!)

A bunch of Mint

First clap the mint between your hands (which sets the fragrant oils of the mint leaves free) and then give them into a chilled glass or a silver cup alongside with the remaining ingredients. Stir occasionally and allow it to infuse for 5 minutes. To intensify the mint flavors, I recommend you to press the leaves against the walls of the glass with your bar spoon once in a while. According to the original recipe the mint should be removed now (I like to leave it in nonetheless, because I think the drink does not become bitter because of this. It intensifies the mint flavor. But that’s surely a matter of taste). Fill the glass or the silver cup with crushed ice and stir again. When the glass or cup becomes steamed up from the cold, the drink is almost finished. Put some crushed ice on top and  garnish it with additional mint. If you take it to your mouth now, the scent of the mint leaves already flows into your nose and you feel good even before the first sip! Whether eye patch, parrot and a revolver would affect the enjoyment somehow, I cannot tell.

3 thoughts on “The Pirates’ Julep”