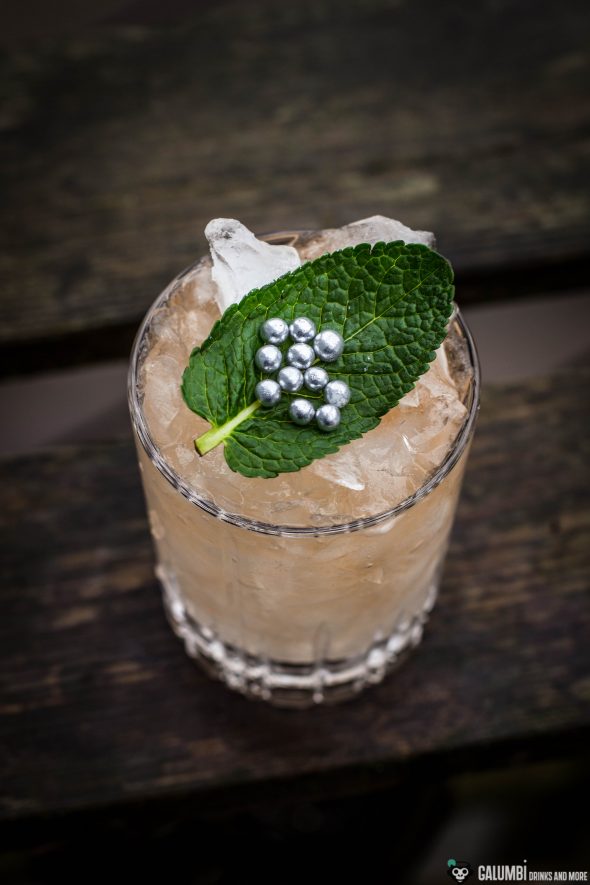 Mint is not just mint – this becomes quickly clear to every cocktail enthusiast. Nevertheless, it is by no means clear to everyone since especially many first attempts by beginners can lead to unexpected results. A cocktail that calls for fresh mint (and countless recipes do) stands or falls with the choice of the right mint. And that mint is generally known as spearmint or green mint, which, unlike peppermint, does not contain menthol. If you confuse the two, you will notice this immediately. If you mix them up in a cocktail and add peppermint instead of (green) mint, it usually ruins the whole drink immediately. Neither a mojito nor a mint julep should make you feel like drinking peppermint candy. (provided test product)*

Now some people may wonder why I am telling this story here. Admittedly, I could have placed this educational digression elsewhere, perhaps even written a whole article just about mint, but today it’s supposed to be about something else, namely a spearmint eau-de-vie. Just a few days ago, I wrote here about the Freimeisterkollektiv – and today I end up there again. Because I have the Freimeisterkollektiv Krauseminze (Kräutergeist) in front of me (Kräutergeist means as much as herbal eau-de-vie). 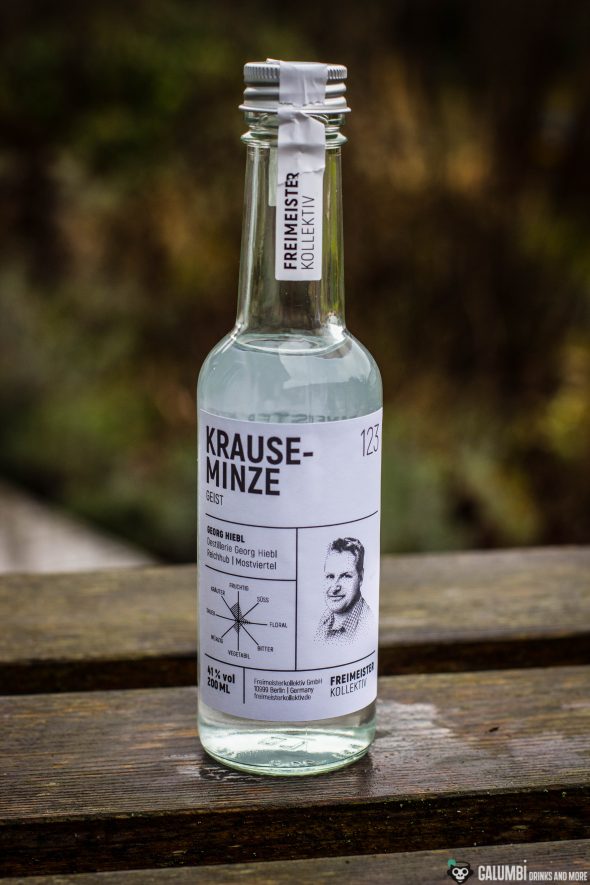 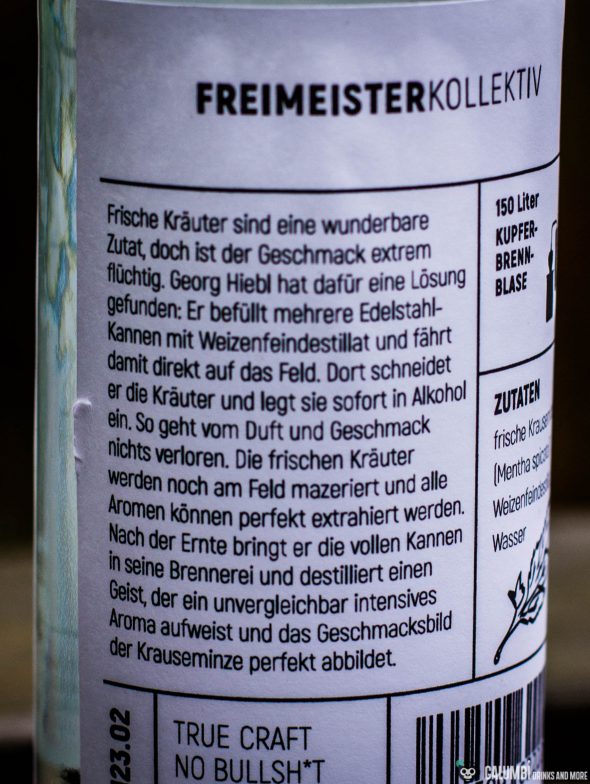 It is made by Georg Hiebl, who is the offspring of an agricultural family from the Lower Austrian Mostviertel, which runs the Vierkanthof in that region. Georg Hiebl specialized his business in the 90s and since 1997 he has devoted himself exclusively to the distillation of fine spirits. Bringing out spearmint in a spirit is something that I personally have never encountered before in this form. So Georg Hiebl offers a real innovation here, which is of course super exciting to use in cocktails. The herbal eau-de-vie is bottled at an abv of 40% and is something I have never had in a glass before.

Aroma: Well, normally I divide my notes classically into aroma, taste and finish. In the case of the Freimeisterkollektiv Krauseminze Kräutergeist by Georg Hiebl, however, this is actually not necessary at all, because if you only move your nose near the glass, you know immediately that simply Spearmint is the essence of everything that could be described. And how wonderfully that works! You don’t find the slightest hint of the artificiality that is sometimes found in mint liqueurs; rather, there is concentrated, fresh, deep, aromatic and spicy spearmint in the glass. It smells like a freshly cut branch of mint, then like a leaf that has been rubbed lightly between the fingers, the soul or “spirit” of spearmint has really been captured here. This is just great and really inspires me.

Taste and finish: The same taste and authenticity, no doubt about it: Freshness, green mint, framed by a supporting, not disturbing alcohol with a long finish that simply doesn’t allow any questions. It is Spearmint – exactly as it should be and no different.

While experimenting, I quickly realized that this concentrated essence of spearmint needs not or should not be used in high doses. Already half a centiliter gives a drink the effect that a small handful of mint leaves would have. But today I really wanted the full mint charge and so I started a drink inspired by one of my absolute favourite cocktails: the Mint Julep already linked above. But to simply replace the fresh mint here with a well-dosed amount of the Freemasterkollektiv Krauseminze would have been possible, but somehow pointless. Instead, I dared to try a “deconstructed” julep broken down to its essence and replaced the bourbon with unmatured rye whisky from the Finnish house of Kyrö. The Kyrö Juuri New Make Rye is accompanied by a little sugar syrup and 0.75 cl of the Freemasterkollektiv Krauseminze Kräutergeist and gets a hint of Bourbon vanilla by 2 Dashes of the Fee Brothers Whiskey Barrel Aged Bitters. Strictly speaking, this is actually more of an Old Fashioned than a Julep, but hey, who wants to be so strict? Nevertheless, just because it’s a tightrope walk here, I have put the drink in a glass tumbler. The classic silver cup is only remembered by the garnish. And here it is, my Deconstructed Rye Julep. Cheers! 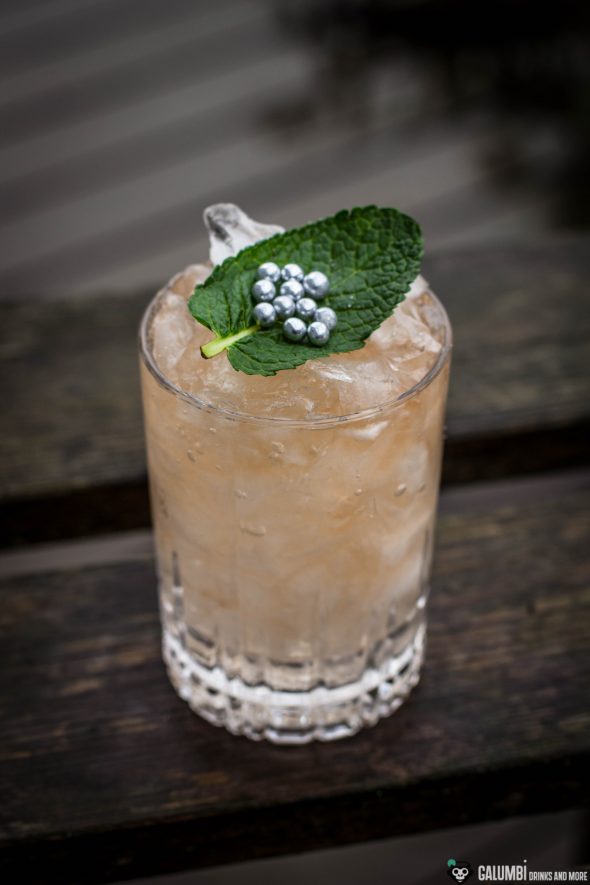 Preparation: Fill a pre-cooled glass with crushed ice, pour the ingredients onto the crushed ice and stir carefully a few times with a bar spoon. Fill with more crushed ice and form a small dome of ice on the glass by hand. 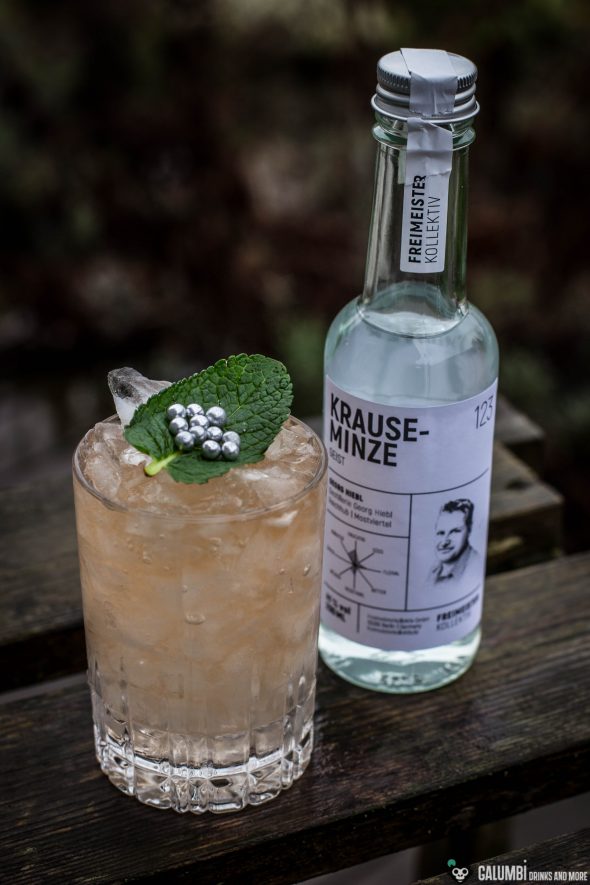 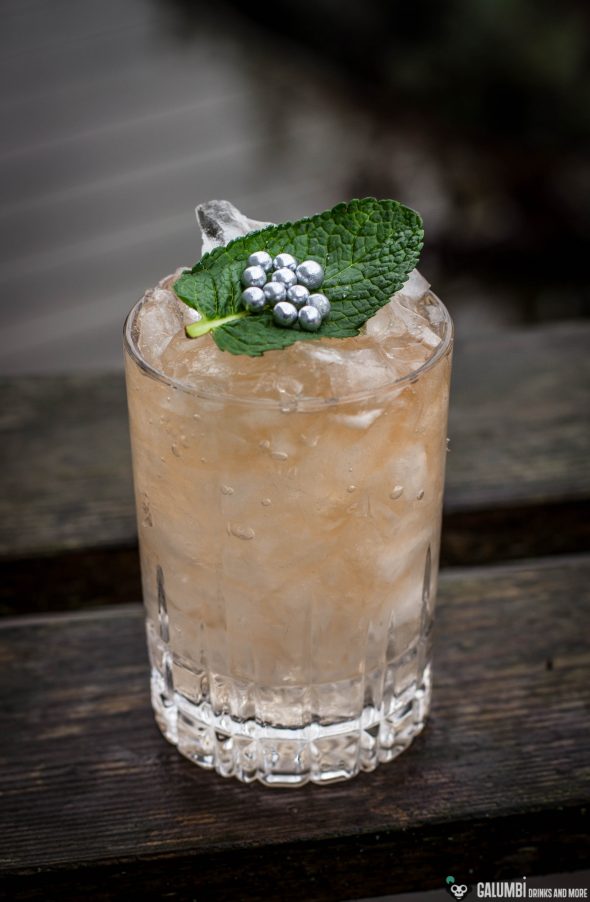