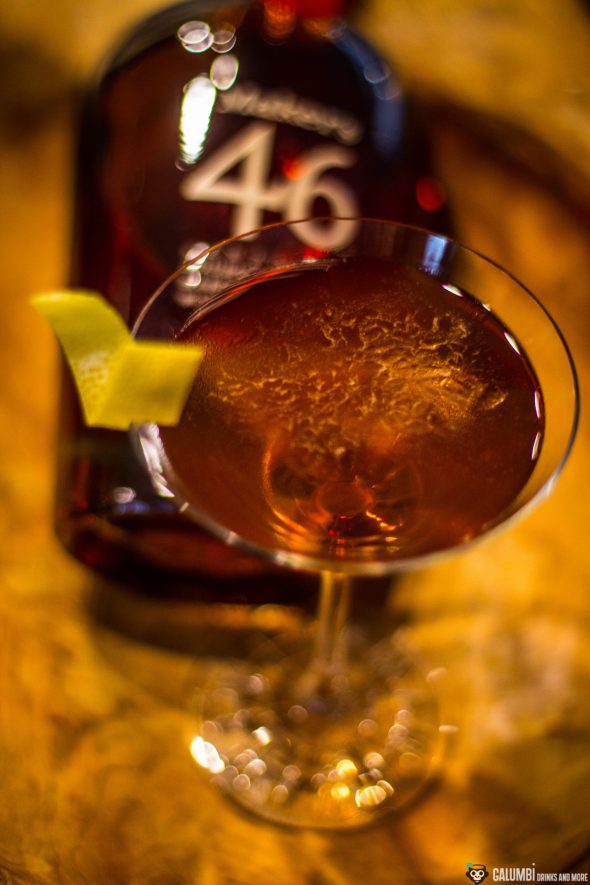 Although I always try to approach every article with the same neutrality and objectivity, personal emotions of course sometimes also play a role. Although I try to contain their influence as soon as I become aware of it, it would not be honest if I said it didn’t exist. That has once again become very clear to me today. (provided test product)*

The reasons for such emotions can be manifold and the effects can be both positive and negative. Especially when a distillate that was widely known as a rather cheap mass product is suddenly also sold in a newly designed bottle as a premium quality under the same flag. Usually that would trigger rather negative feelings (though often unjustly). On the other hand, it also works vice versa, of course, so that expanding the range of a highly esteemed brand leads directly to a thrill of anticipation, but of course also to high expectations. Against this background, I would like you to understand my remark when I have to state that I was very much looking forward to the review of today’s bottle.

Even if you only know a little bit about the world of spirits and especially about American bourbon, you will probably be familiar with the characteristic bottleneck sealed with red wax. The name Maker’s Mark has stood for a solid promise of quality for a long time, and certainly hardly any friend of American bourbons will not have tried it at least once.

At the moment we are still experiencing the steadily growing expansion of the premium segment within the spirits market. And also the bar world (cocktail drinkers in particular) are increasingly demanding special bottles, brands and qualities. However, when I recall the time when I started to learn about spirits, cocktail culture and cocktail history (which was around the middle of the “noughties”), I also remember what it looked like before the so-called “cocktail renaissance”. It was also at that time when Chris McMillian first inspired and influenced me with his video series about classic New Orleans cocktails. The Mint Julep is still my absolute favourite among the drinks and it was a Maker’s Mark Kentucky Straight Bourbon Whiskey Chris used to prepare the drink, while he recited an ode to the Mint Julep by Joshua Soule Smith from the 1890s – A goose bump moment (you can find the ode also as part of my article on the Mint Julep)! 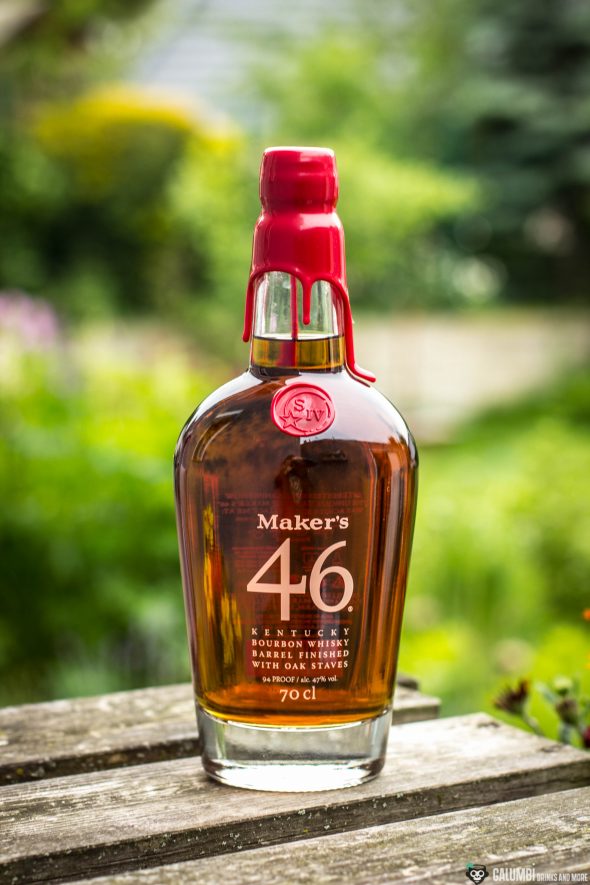 Although some time has passed since then, the Maker’s Mark already had a certain premium reputation, it was somewhat more expensive than many competing products and has maintained a certain uniqueness ever since. It is still distilled at the Maker’s Mark distillery in Loretto, Kentucky, which was established in 1959. Bill Samuels sen. developed the recipe for Maker’s Mark in 1953 together with Pappy van Winkle (today the distillery, which belongs to Beam Suntory, is run by Bill Samuels jun.). The special feature to this day is the renunciation of rye in the mash (70% corn, 30% malted barley and red winter wheat) as well as a special process in which the grain is not ground but bruised. In the meantime, however, most bourbon drinkers and bar visitors will perceive a Maker’s Mark more as a standard product and will not approach it with the same delight as it might have been the case a little more than a decade ago. Nevertheless, since 2010, the Maker’s Mark distillery has also been offering the Maker’s 46, a bottle specially designed for the premium segment, on which I want to take a closer look today. 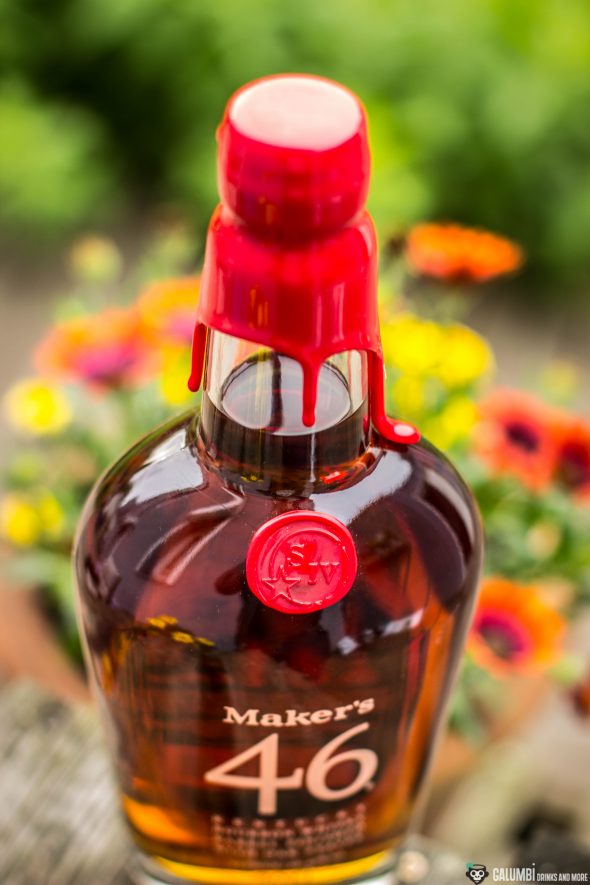 First, the “46” here does not stand for the alcohol content of the bottling, as one might think at first (the Maker’s 46 instead comes with an ABV of 47%). Instead, the name derives from the special nature of the whisky: for the Maker’s 46, the normal Maker’s Mark Bourbon Whisky is finished once again in barrels that have previously been fitted with staves made of seared virgin French oak. A rather ingenious process within the legal limits for Bourbon! And since it was the batch of staves numbered 46 from the stave supplier, which achieved the best result during the experimental phase, it is called Maker’s 46.

So far, so good. Oh well, before I begin with the tasting, I would like to point out that I have actually not forgotten the e in the little word whisky out of “Scottish” habit, but that Maker’s Mark Whisky actually writes whisky in the Scottish style without the e. 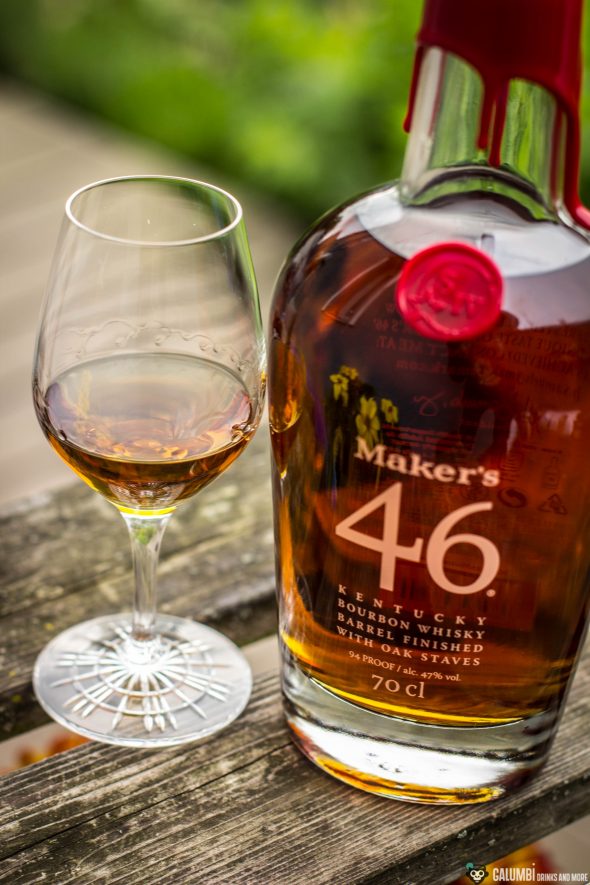 Aroma: Very nice and warm caramel tones are my first impression. These combine with softer vanilla notes and a pinch of very harmoniously integrated oak spices (cinnamon, some nutmeg and a hint of cloves). A light, fresh citrus note also caresses the nose, and I can scent a very subtle smoke.

Taste: The Maker’s 46 offers a very well balanced and pleasantly soft mouthfeel. Here, too, toffee and vanilla are the main flavours, but there are also notes of roasted nuts, honey and a hint of orange. Cinnamon and nutmeg become stronger over time, and there is a little bit of freshly cut apple wood. Although no rye is contained, the Maker’s 46 manages the balancing act between mild softness and expressive spice with bravura. Without question, this is a very nice bourbon whisky!

Finish: here, too, the ambivalent character of the whisky comes to the fore: mild and soft with a long-lasting, quite dry finish dominated by spicy oak.

The possibilities to use the Maker’s 46 in cocktails are quite diverse and for numerous classics from Old Fashioned to Manhattan to Mint Julep I would make a recommendation without hesitation – whether the result suits your own taste, of course you’ll have to find out for yourself. However, I would not really use it in a Whisk(e)y Sour or one of its numerous relatives as I doubt that its ambivalent character of mildness and spiciness can be appropriately accentuated here. Therefore, my cocktail suggestion for today is most closely related to a Manhattan or its offshoot, the Brooklyn cocktail, because instead of red vermouth, I am relying on a dry Quinquina with the Cocchi Americano. Maraschino, on the other hand, is not part of my recipe, but a Nuance of green Chartreuse and D.O.M. Benedictine, which are used here mainly for accentuation like bitters. However, genuine Bitters are also used. I’ve called the the drink “Contemplating Life” because I mixed and drank it in a melancholic moment and the drink reflected this moment so wonderfully that I had no other choice. 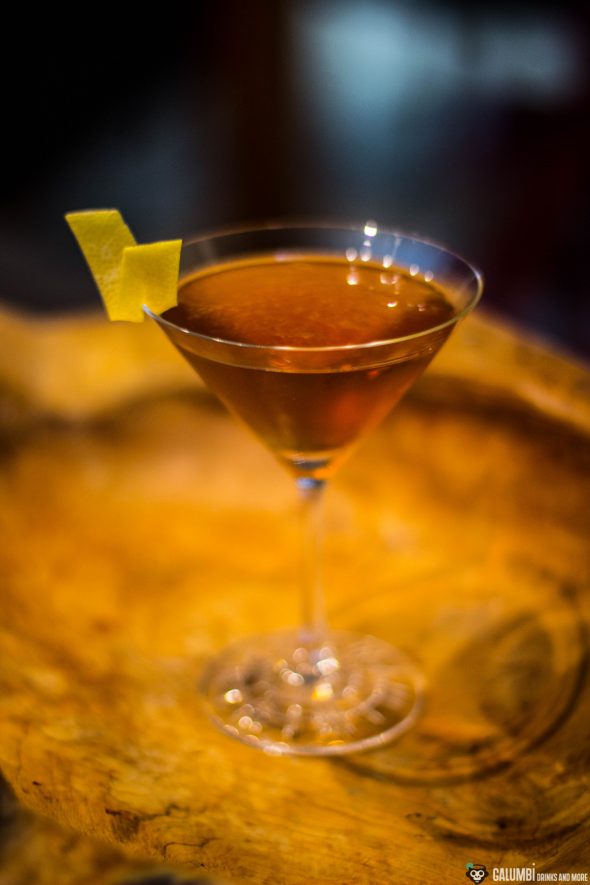 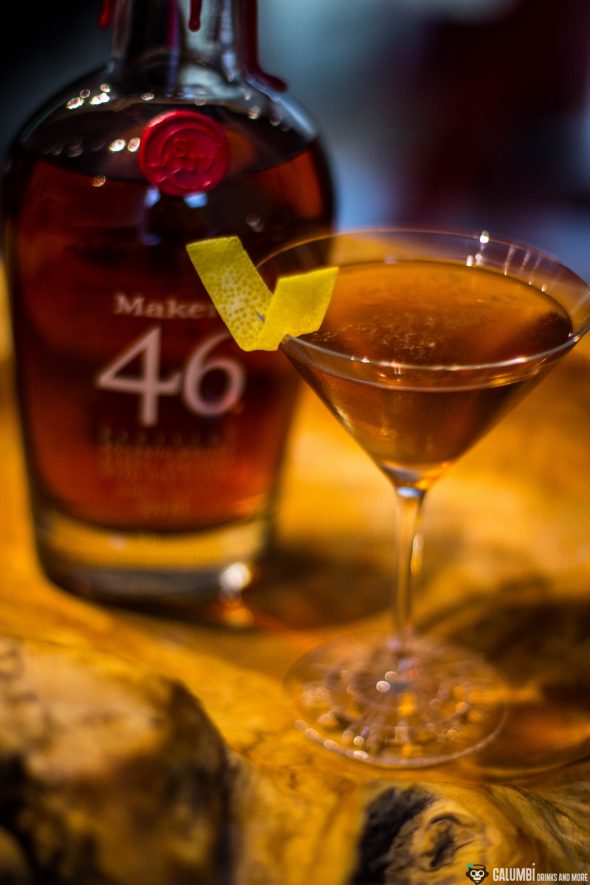 Preparation: Stir all ingredients cold in a mixing glass on ice and strain into a pre-cooled glass. Spray with the oil of a lemon zest. 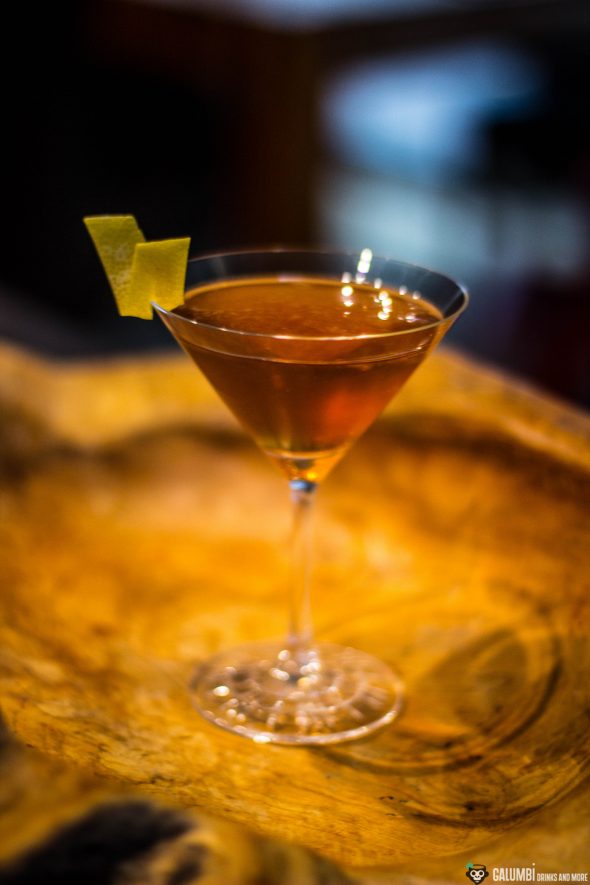 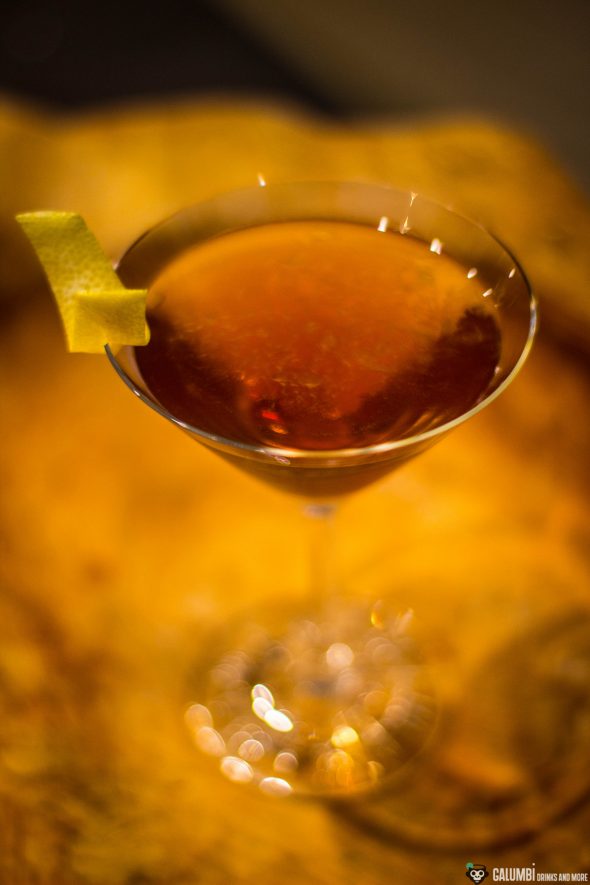