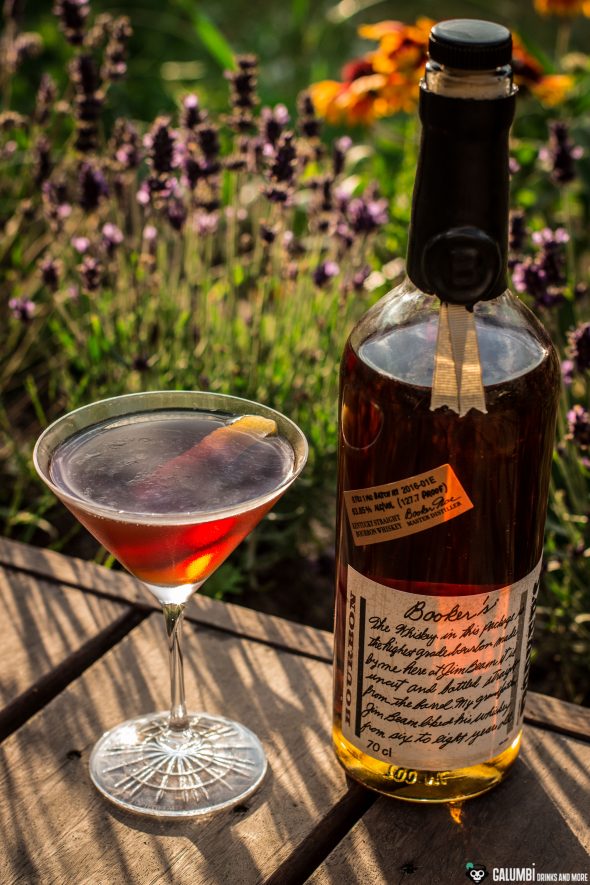 Today I want to write about a bottle that is near and dear to me. In fact, it includes one of the first Kentucky Straight Bourbons I came in contact with since seriously being concerned about spirits and bar culture. And to this day it belongs to my undisputed favorites: the Booker’s Small Batch Bourbon. What makes this bourbon so special? And how should you drink it? (provided test product)

The Booker’s background is deeply rooted in the history (and also the rackhouse building) of the Jim Beam Company. Frederick Booker Noe II, the son of Margaret Noe who is for her part the daughter of a certain James Beauregard Beam (better known as “Jim”), began working for the family business in the 1950s. As the grandchild of the famous name giver, his intrinsic motivation was undoubtedly given. And ultimately he was the one who led a more than 200-year-old family tradition out of the private niche into the global market: Booker Noe sought out some barrels from the center of the company’s rackhouse and filled the whiskey in bottles as a gift for friends and family. In the buildings center the ratio of temperature and humidity is said to have the optimum influence on the whiskey maturation that can be achieved. The whiskey is simply bottled and that’s it. Neither was it filtered nor was the drinking strength lowered with water. And this tradition was now made public and opened to the market under Booker Noe and has been sold under the name “Booker’s” since 1992 as a “small batch bourbon” (according to the company, the term “small batch bourbon”, which is now widely and also inflationary used, was coined in this context.) 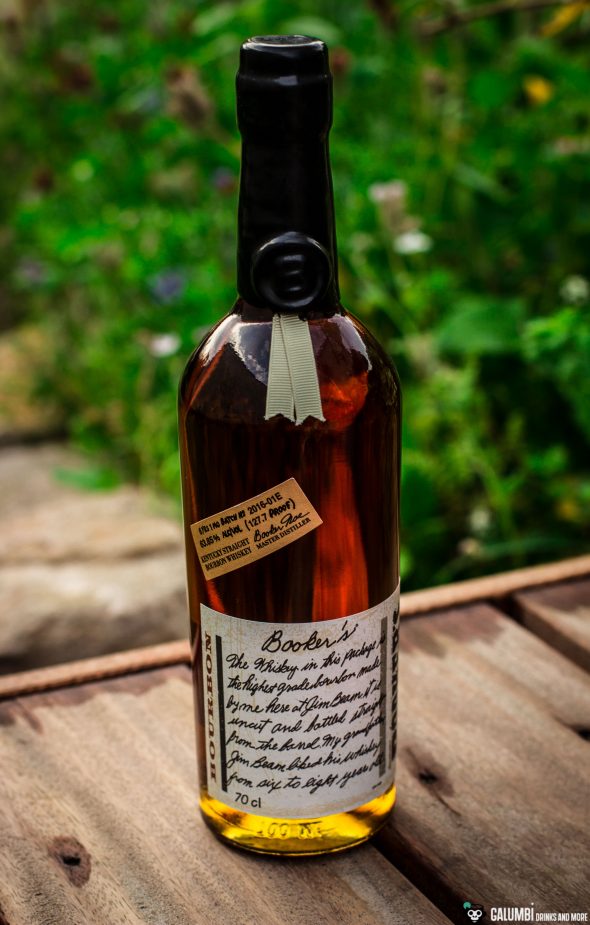 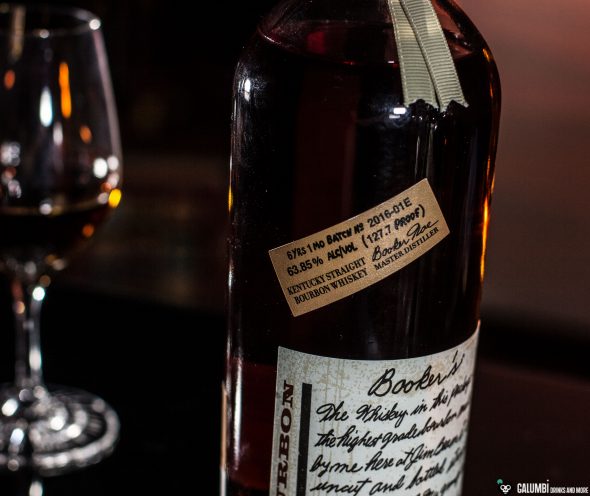 As you can imagine, the Booker’s comes with a good portion of alcoholic power. Depending on the batch, the ABV can vary slightly, as it is always the case with direct bottlings straight from the barrel. It may also have a higher alcohol content than 62.5% ABV in the end, although this is the maximum allowed strength by which the Bourbon can be filled into the barrels at the beginning of the maturation process. If, however, during the maturation more water evaporates from the barrel than alcohol, there are even higher strengths possible. The bottle which can be seen here in the pictures and to which my tasting notes below refer to, was filled with 63.85% ABV. The age of the Booker’s Bourbons is six to eight years. As you can see from the small sticker with the batch information, the Booker’s bottle I am reviewing here has an age of six years and one month. The bottle belongs to batch 2016-01E.

Speaking of the bottle: Like the Basil Hayden’s, which is also part of the series of “Small Batch Bourbons” from Beam Suntory, the Booker’s also impresses with a really beautiful bottle. The label is lettered with the handwriting of Booker Noe and bestows a traditional and artisan flair upon the bottle and the bands applied to the bottle neck into a wax seal enhance the overall appearance. 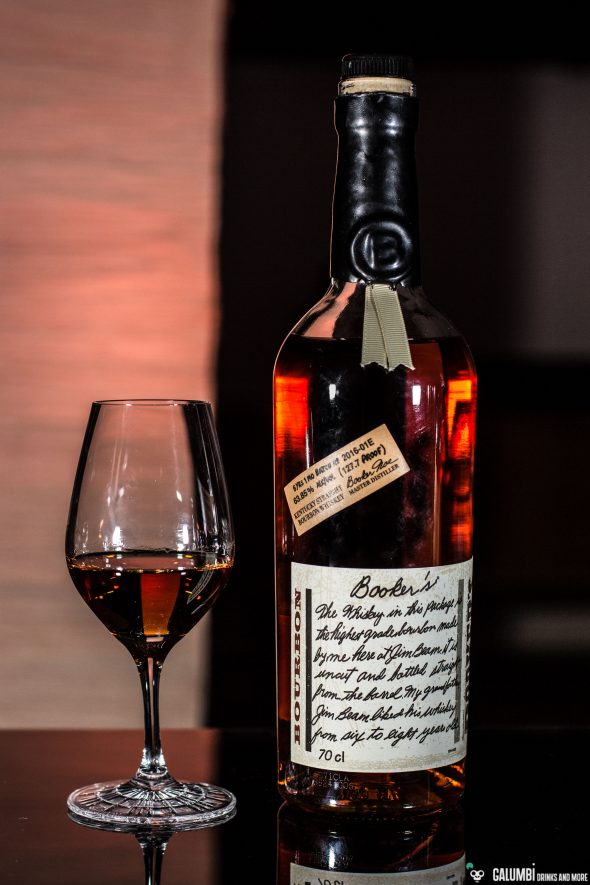 But now let’s have a look on the inside.

Aroma: Intensive, spicy vanilla twines with an overripe orange, thus introducing with a Bourbon welcome par excellence. A pronounced oak aroma is also noticeable immediately; in addition to honey and spices like cinnamon, cloves and nutmeg, a little cookie dough and a subtle association of smoke. If I wouldn’t know, I would never have expected that there are almost 64% of ABV in my glass.

With a little water, the strong oak character moderately diminishes, but without disappearing. A little dark fruit comes through and blends very nicely with the vanilla and the orange. After a while some milk chocolate appears. The Booker’s is a real aromatic gem, there is a lot to discover!

Taste: Even if this Bourbon is surprisingly mild for 63.85% ABV, the alcohol cannot hide completely. A certain familiarization is therefore required and without the addition of water there will always remain a certain sharpness on the tongue. A lot of spice and strong oak characterize the flavor, the sweet vanilla takes a while here until it breaks through. Often the Booker’s is associated with some notes of tobacco; I would not have described them as such but actually I can find them.

A few drops of water are obligatory for me here. This brings vanilla and honey into the foreground, but without being able to completely deny the oak character. Beautiful, intense and spicy tones create a marvelous harmony with the sweeter side of the Booker. Chocolate, black cherry and caramel are also present, but they always remain in the background. Insanely complex!

Finish: long, full-bodied and with a whole load of vanilla, caramel and spices – what a bourbon!

Attentive readers of my blog might have noticed that until now I did not write about one of the most famous and widespread cocktails of all time: The Manhattan. This has a special reason because I really wanted to write about the Manhattan together with the Booker’s Bourbon here. The reason for this is simple: I prefer my Manhattan with this whiskey. The Manhattan is often perceived as the classic alternative to a Martini (sometimes even referred to as the “Queen of cocktails”). While a Martini usually is characterized by a very good portion of alcoholic strength (which undoubtedly works as a flavor carrier), this is not necessarily the case in a Manhattan. I don’t like to use a rather “weak” bourbon in a Manhattan (I would opt for a rye whiskey instead if it has to be lower in alcohol) since the cocktail not only loses power that way but also depth of taste. This is not the case with the Booker’s, however, and it is all the more pleasing that its basic characteristics work so harmoniously with a beautiful, aromatic red vermouth (here I trust in the Carpano Antica Formula). And finally, I like to spray the Manhattan’s surface with a little oil from a lemon zest. If I get one, I even like to use the zest of an Amalfi lemon – I know this is somehow snobbish, I beg to forgive that. 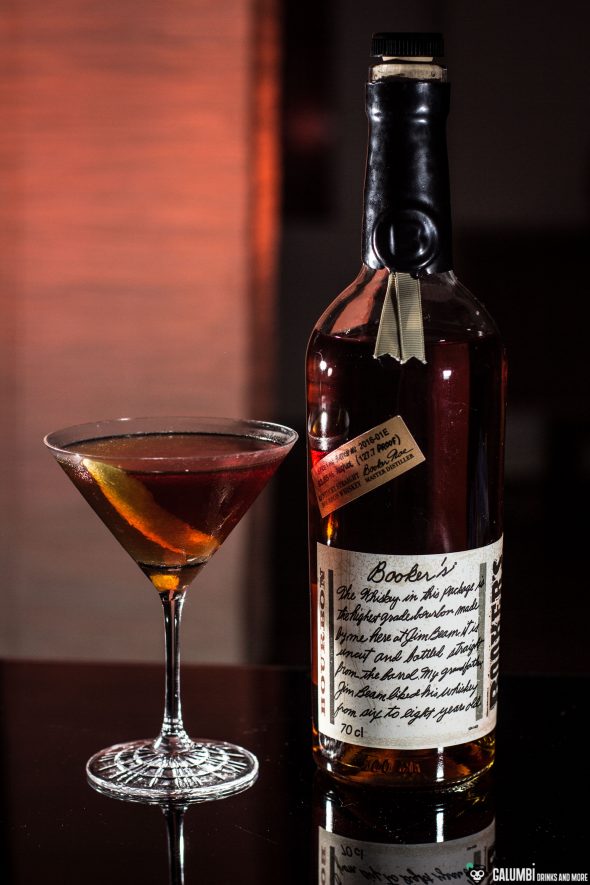 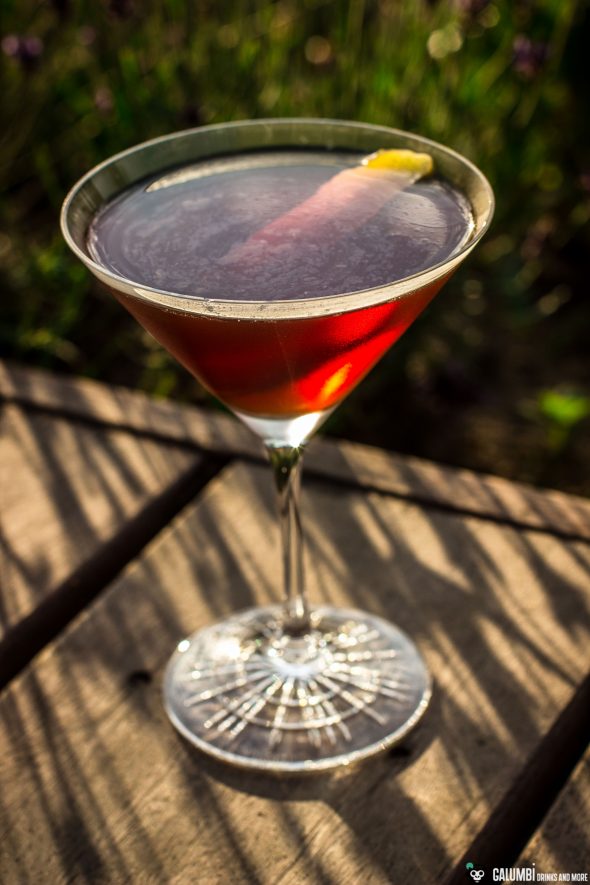 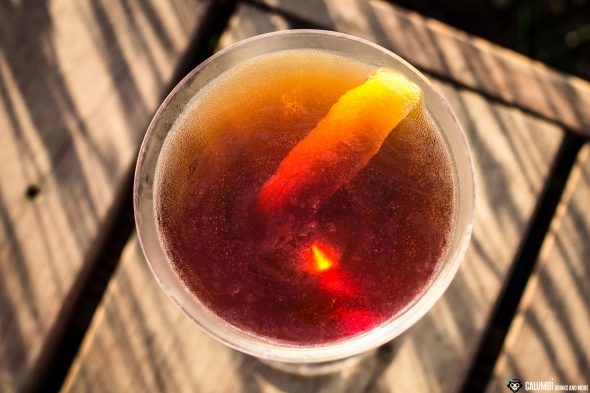 Of course you can argue about whether a Manhattan should be prepared with Rye or even with Canadian Whiskey. Personally, I actually prefer an Overproof Bourbon and here it’s the Booker’s. Variations are nonetheless welcome to me and so this is, of course, by no means to be understood as the one and only recipe. I am not a fanatical apologist of Bourbon Manhattans, even though I choose them most of the times.

The myths of origin around the Manhattan are numerous and none of them is clearly validated. What is certain is that in the 1880s it was first recorded in written form and presumably invented in the USA of the mid-nineteenth century. At that time it was mainly mixed with bourbon or rye whiskey, (during the prohibition in the early 19th century it was surrogated by the available Canadian whiskey from the black market). It was first mixed with approximately equal parts of whiskey and vermouth. Whether stirred or shaken is not fixed, since there are numerous sources for both types of preparation; It is left to the personal taste (I’m always stirring a Manhattan). The cocktail was supposedly named after the New York Manhattan Club, although this is not assured (the story that it was invented in December 1874 at a Manhattan Club banquet given by Winston Churchill’s mother in honor of a US Presidential Candidate is not true: Jennie Churchill stayed in France at that time).

Anyway, here is the recipe for my favorite Manhattan.

Preparation: Stir all the ingredients on ice in a mixing glass until cold and strain into a pre-frosted glass. 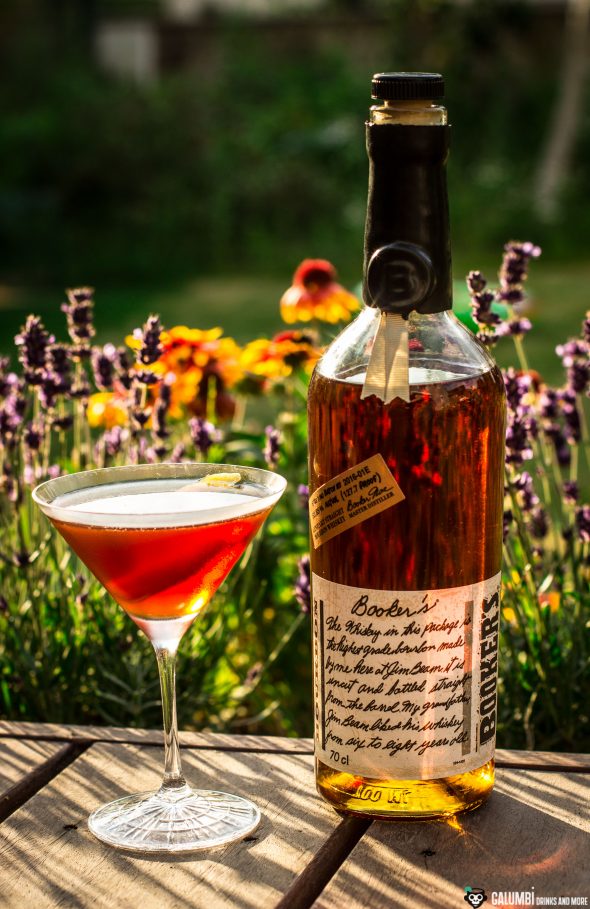 Buying sources: The Booker’s Bourbon can be found at specialized retailers or online. A bottle costs about 60 euros.