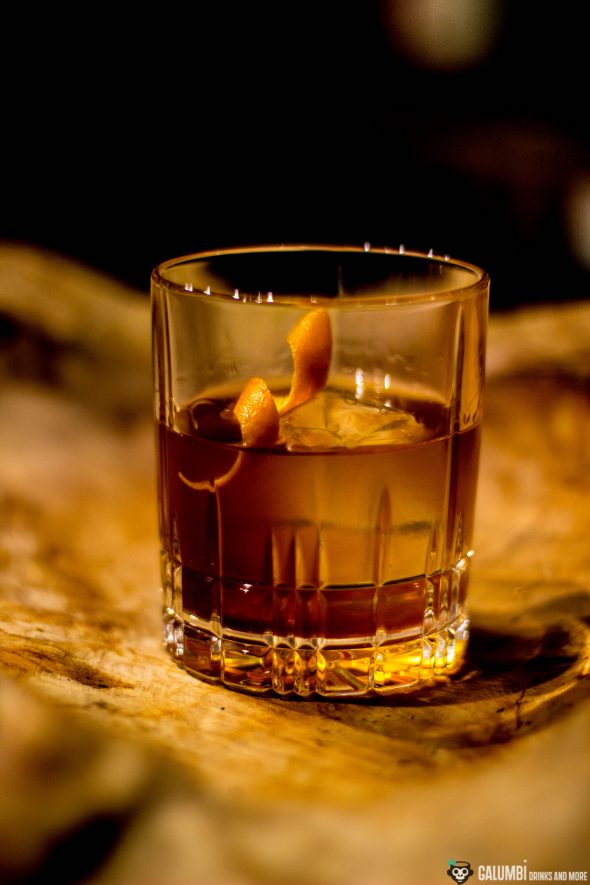 If you are interested in American whiskey, there is no way around the name “Beam”. That this is the name of a traditional family of master distillers is not necessarily clear to everyone outside of the US or those being only briefly involved with the matter. This is mainly the case because the name Jim Beam has burned itself into the collective consciousness as the brand name of a not too expensive and easily available Bourbon. However, the Beam family has produced much more than just mass product whiskey. (provided test product)*

Those who would like to go into detail about the Beam family have, however, not really taken an easy approach, since the ramifications of the family relationships are quite considerable. And by no means is everything that is produced by a member of the Beam family also sold under the name Beam – or distributed by Beam Inc. at all.

So today, I have a bottle in front of me that listens to the name Minor Case Straight Rye Whiskey. Accordingly, the name doesn’t give you any idea that some Beams have their fingers in the pie. Even a closer look at the bottle label doesn’t indicate anything, because here we only get to know that it is a whiskey from the Limestone Branch Distillery in Lebanon, Kentucky. But if you do some research on who the heads behind this distillery are, which was only launched in 2012, you will come across the names Steve and Paul Beam. These in turn come from the family line of a certain Minor Case Beam (yes, that was indeed his first given name), who in turn is a descendant of the legendary founding father Jacob Beam. That Minor Case – called MC – Beam worked in the late 19th century under the aegis of his uncle Jack Beam in the Early Times Distillery and later in the Gethsemane Distillery, which was later renamed to Head and Beam Distillery. 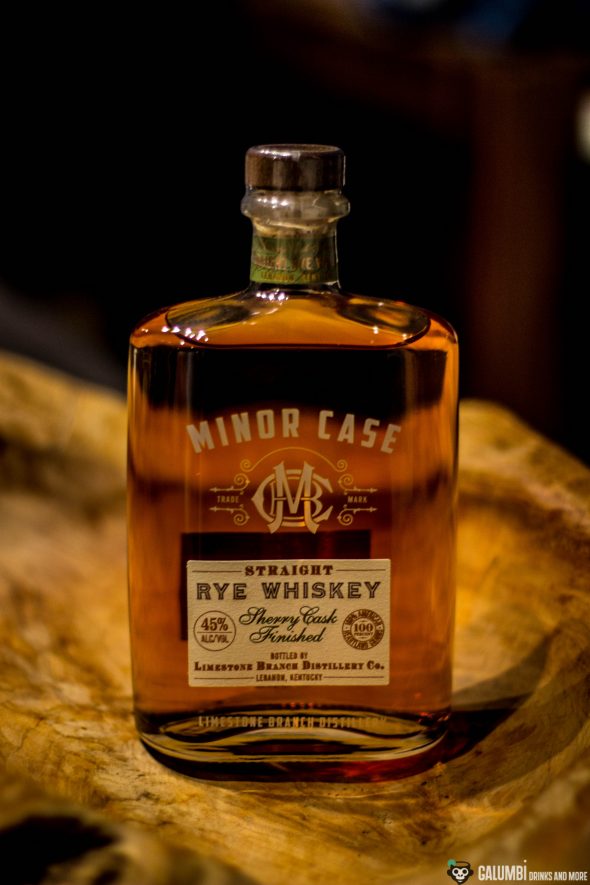 If that was too confusing for you, I can reassure you that I will stop here, because I don’t intend to place any more genealogical remarks in this article and would rather take a closer look at the bottle instead.

The Minor Case Straight Rye Whiskey was – as the front label already reveals – matured in former sherry barrels. What in the Scotch area no longer draws anyone from the woodwork is still a rarity when it comes to American whiskey. The Minor Case Rye is based on a two-year-old whiskey, which was finally bottled at an ABV of 45%. Well, let’s see how much of the motto of Minor Case Beam can be found in this bottle: “Craft only the finest whiskey”. 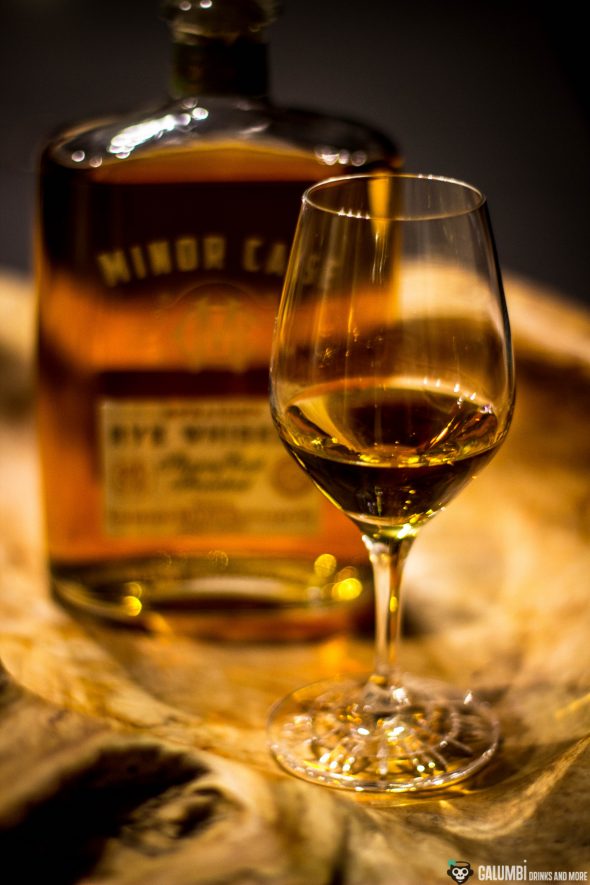 Aroma: Yes, this is undoubtedly a rye whiskey here in the glass, but from the very beginning, you notice that it is not a classic one. Even though the Minor Case initially stands out with a distinctive load of spices (cinnamon, nutmeg, some cloves), it is accompanied right from the start by unusual, vinous notes of dark fruit (especially cherry notes). The sherry barrel is therefore clearly noticeable. Oak wood, caramel and vanilla are also part of the game and already during the first minutes of tasting, I noticed how I want to try it in a Manhattan. I really like the fruity notes.

Taste: The 45% abv are very soft, alcohol is hardly noticeable, however it carries a lot of spice. Also here a “typical rye” mixes with dark fruit tones to an interesting and appealing picture. Some time ago, I tasted a bourbon that was finished in a port wine barrel, which I feel a little reminded of here – even though we have a sherry barrel finish here. Again: in combination with a vermouth, you will probably achieve a great result here.

Finish: Above all cinnamon, nutmeg and some white pepper remain, combined with some cherry and raspberry, in addition a quite long lasting sweetness. 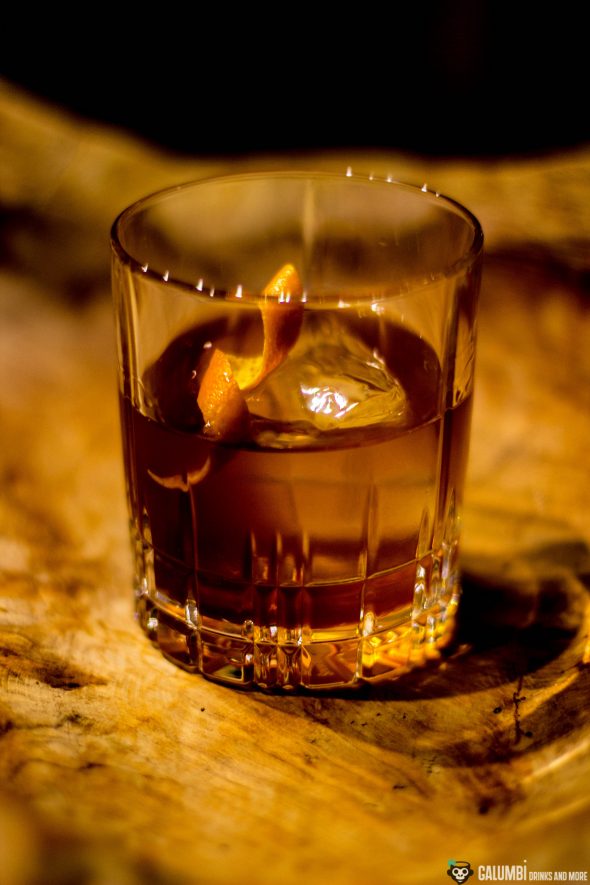 Yes, in a Manhattan this rye works wonderfully! But I have already introduced this classic drink here in the past and would like to offer something new. There are many parallels between bar craft and culinary art, especially in the use of herbs, spices and generally with regard to possible taste combinations. Nevertheless, while in the kitchen spice blends are very important, they are rarely used behind the bar. Usually one or two spices or herbs are used in one drink (e.g. in a Smash) and that’s it. Today I wanted to use a whole load of spices to cook a syrup together with a Syrah red wine. This Syrah spice syrup accompanies the Minor Case Straight Rye Whiskey in my Oriental Spice Old Fashioned and invites you on a spicy-complex journey. For the spice mixture, I first roasted a whole series of spices in a pan, then ground them, cooked a spice wine syrup from them and finally filtered out fine particles through a filter cloth. 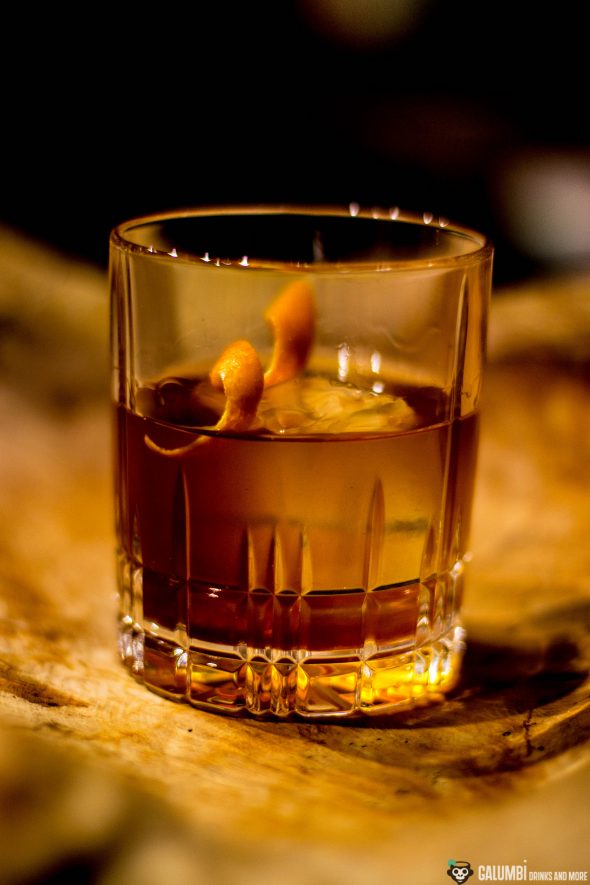 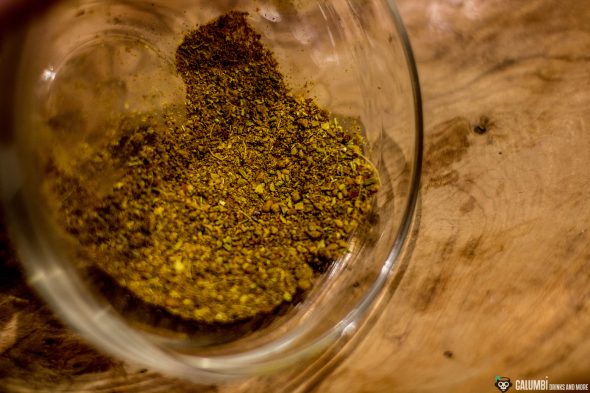 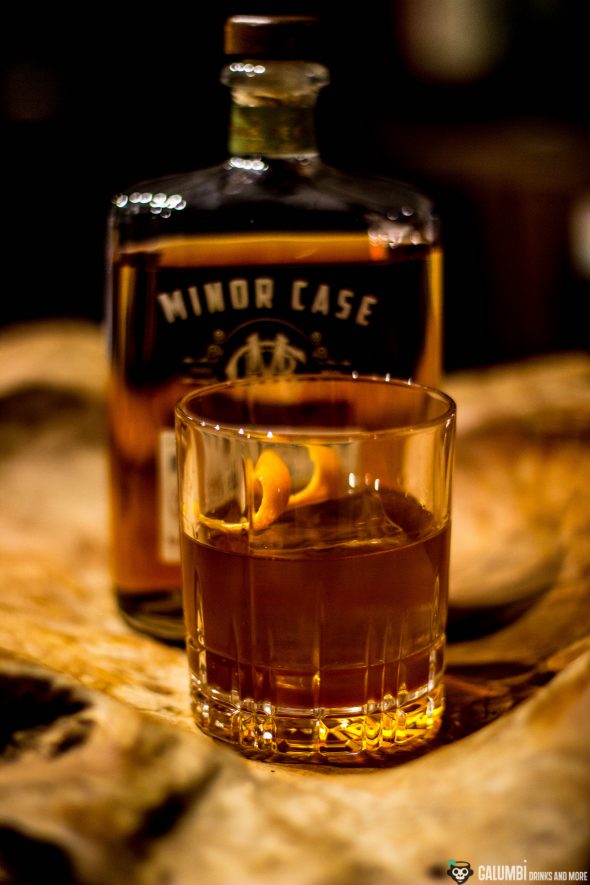 Roast in a pan over medium heat until you smell the scent of the spices rising from the pan. Then grind coarsely in a spice mill. Finally, add a heaped bar spoon of the spice mixture to each 100 ml of Syrah and 150 g sugar into a pan and stir. Simmer until syrup consistency is achieved. Pour the syrup through a fine filter cloth to filter out the spice particles and let it cool.

Preparation: Place all ingredients in a glass on solid ice and stir briefly. Finally, spray with the oil of a tangerine nest.