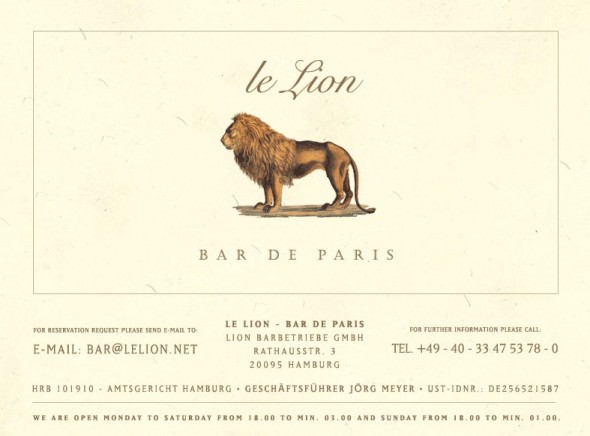 Occasionally I will blog about individual bars I have visited in my free time while travelling around different regions and countries. I’ll try to write only about those I think to be advisable or at least worth seeing. For me it was basically out of the question with which bar I’d start: The Le Lion – Bar de Paris in Hamburg.

Whether the Le Lion now is the best bar in the world or not is debatable. Surely the Le Lion has a place in the leading group and was honored in various rankings in the past and present (currently the Le Lion is ranked on a 16th place in a famous International Ranking of the world’s best bars). For me it is already completely indifferent, whether the fifth best bar is worse than the third best bar, but people have a weakness for excellence-suggesting labels. The predicate of  “the best” is probably as old as human culture, yet it remains subjective.

I first heard of the Le Lion through a video post on Spiegel Online in the year of 2008. Le Lion at this time was not yet a year old, but had already drawn attention to it. The video columnist Werner Theurich visited the bar in this video and ordered a classic  Martini which was presented and explained to him by the owner of the Le Lion, Jörg Meyer. Basically, this video was something like my awakening experience in terms of drinks and bar culture.
Meanwhile it happened to be that two good friends of mine moved to Hamburg. So I finally got the pleasure to visit the “Hansestadt” (which I had previously missed somehow).

At my first visit I told them about the Le Lion and promptly made a telephone reservation. Already during the phone call my positive expectation were confirmed, because at the other end I spoke to a really eloquent and polite staff (whose name I have unfortunately forgotten).

In the evening the time was there: If we did not know where we wanted to go, we would surely have missed the Le Lion. The bar is hidden behind a dark door with the head of a golden lion on it. You have to ring a small golden bell before entering. After ringing the door bell, the staff welcomed us in a preppy old-school suit.

The Le Lion is small, but pure style. The walls are hung with brocade, there are no windows and a dark carpet also ensures a lightly attenuated atmosphere. Classic lounge music came out of the speakers. But what catches your eye first is the big bronze statue of a lion behind the bar. You think you are actually in Paris in the 20th.

I opted for a “Professior Langnickel”, a drink invented by Mario Kappes about which I had already seen this video. My companions ordered a Gin Basil Smash (which was also invented at the Le Lion by owner Jörg Meyer and started its success story from there) and a “Dark & Stormy“.

The drinks were really the best I’d had up to that time. The subtlety of taste, the aroma of lemon oil in my nose, the atmosphere of the ambience around me … this all somehow culminated to the perfect gastronomic experience.

We stayed there for another two hours and had some more drinks. Each one was really excellent and outstanding. The water that they bring you for free on a regular basis is also an excellent companion, because it definitely prevents too rapid inebriation.

The visit should not become my last one and today the Le Lion for me belongs to Hamburg as well as Reeperbahn and Landungsbrücken. Unfortunately my visits to Hamburg are rare since both friends had to leave Hamburg in now work in other cities. For my wallet this might perhaps be an unexpected blessing.

Meanwhile, Jörg Meyer has opened another bar in Hamburg: the Boilerman bar. I definitely have to pay it a visit. And soon he’ll open up a third bar with: the Winchester Bar. Good times if you live in Hamburg…

10 thoughts on “Travelling Bars (1): The Le Lion in Hamburg”