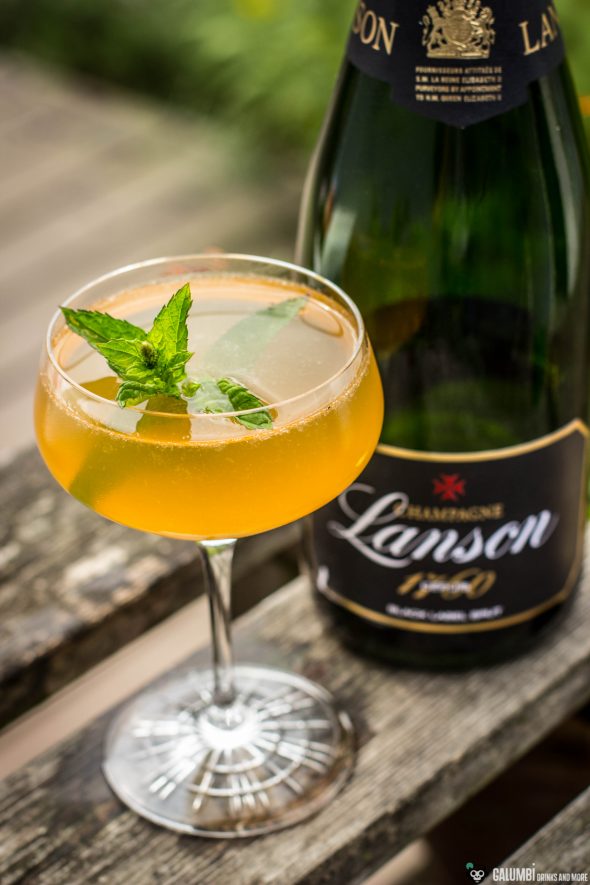 When it comes to the classic repertoire of cocktail ingredients, usually you start by listing various types of spirits, from cognac to gin to whiskey, and then quickly end up with vermouths and cocktail bitters or even herbal liqueurs and syrups. Champagne, on the other hand, is easily misappropriated, which happens probably mainly because most people simply do not think of it as a component of cocktails. The champagne’s nimbus of solemnity, nobleness and sophistication is too big; that is why supposedly it demands to enjoy it neat. However, such thinking is actually a misconception – despite all the qualities of a good, stand-alone champagne.

Today I would like to present a few classic ideas of what you can do with champagne. And for this I will use a champagne that enjoys an excellent worldwide reputation and is versatile enough for use behind the bar: the Lanson Black Label champagne. 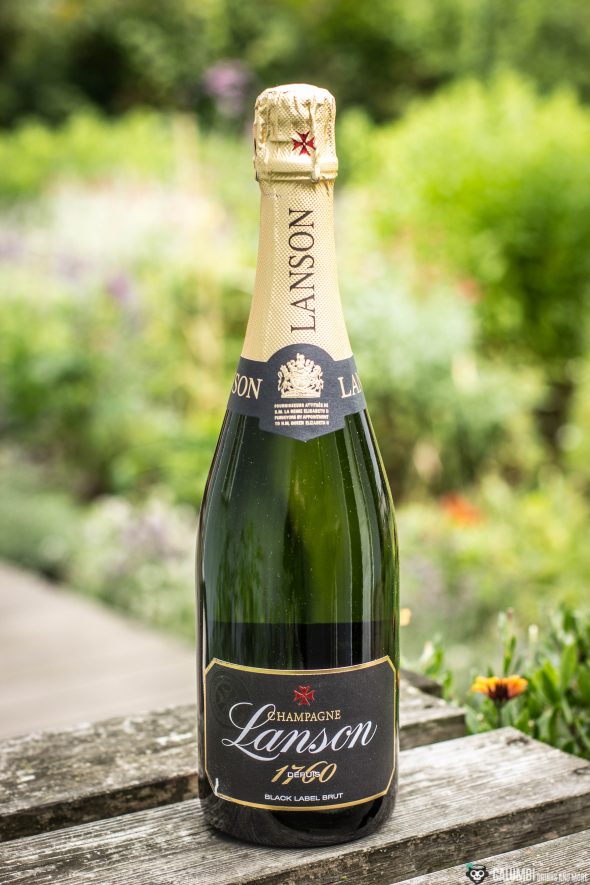 The champagne house Lanson was founded in 1760 by Francois Delamotte in Reims (formerly also written Rheims) in the Champagne region and is one of the oldest champagne producers in the world. Highly decorated and appreciated (among other things, one proudly carries the coat of arms of the English royal house as a purveyor to the court), the brand has maintained a very good reputation since its foundation up to the present day and, of course, the company is committed to maintaining this reputation. There are different bottlings under the name Lanson, but the most famous standard bottling of the house is the Black Label. This is a Brut Champagne, made as a cuvée from 50% Pinot Noir, 35% Chardonnay and 15% Pinot Meunier. Due to the main proportion of Pinot Noir, it also bears the designation “Black Label” as a reference to the “black grapes”. The cuvée consists of wines from almost ten different vintages, which finally mature for three full years in the Lanson cellars. Rarely to be found in champagne production, Lanson completely avoids malolactic fermentation. 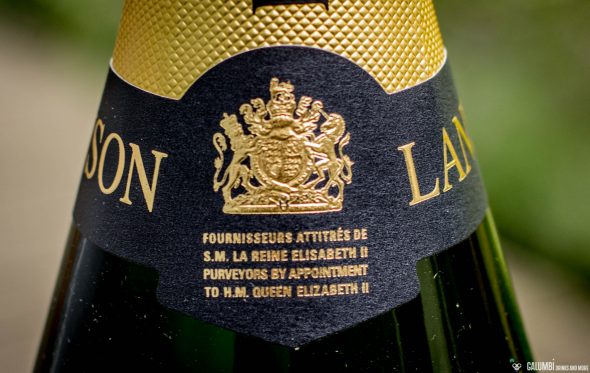 The Royal Coat of Arms

The Champagne Lanson Black Label Brut (that’s its full name) finally comes along with an alcohol content of 12.5% ABV, – and of course it is also highly recommendable for having it neat. 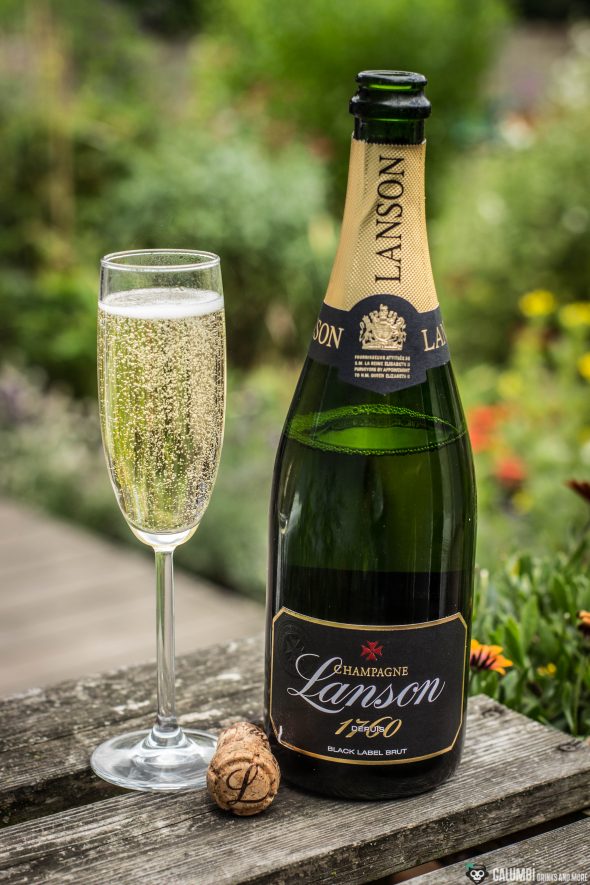 Aroma: The Lanson Black Label shows a very appealing harmony of light fruits (green apples, lemons with zest, pears and some peach), but also blackberries can be found. Behind that, there are subtle notes of baked yeast dough, a hint of ginger, floral hints and earthy tones.

Taste: full-bodied notes of light fruit with a finely balanced acidity come to the fore, followed by some buttered bread, a subliminal honey sweetness and again some ginger. The Lanson Black Label captivates with a dry and multi-layered characteristic. Mineral tones and associations of smoke invite you to linger.

Finish: lively and long with floral notes and fruit stones.

I would like to start here with a really simple, but historical recipe that simply should not be ignored at this point: the Champagne Cocktail. Although this cocktail, which is ultimately nothing more than a kind of “Champagne Old Fashioned”, was first mentioned in 1855, the oldest recipe comes from the first cocktail recipe collection we can look back at: How to Mix Drinks or the Bon Vivant’s Companion by “Professor” Jerry Thomas from 1862. However, Jerry Thomas’ recipe instructions are a bit odd, as he wants us to shake the champagne, which is definitely not a particularly good approach. In this respect, I am using a modified and adapted recipe here, which is nevertheless very easy to copy at home. 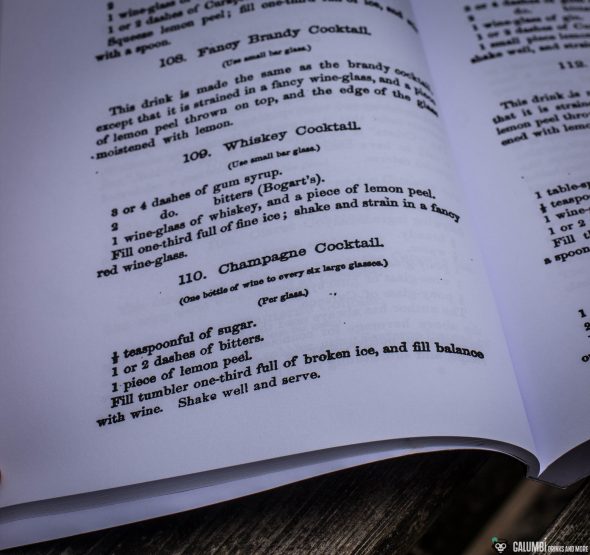 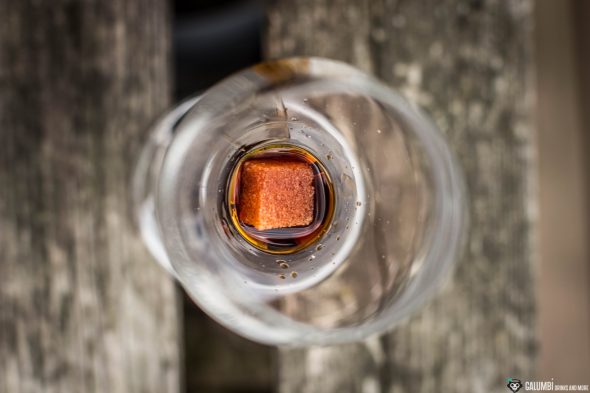 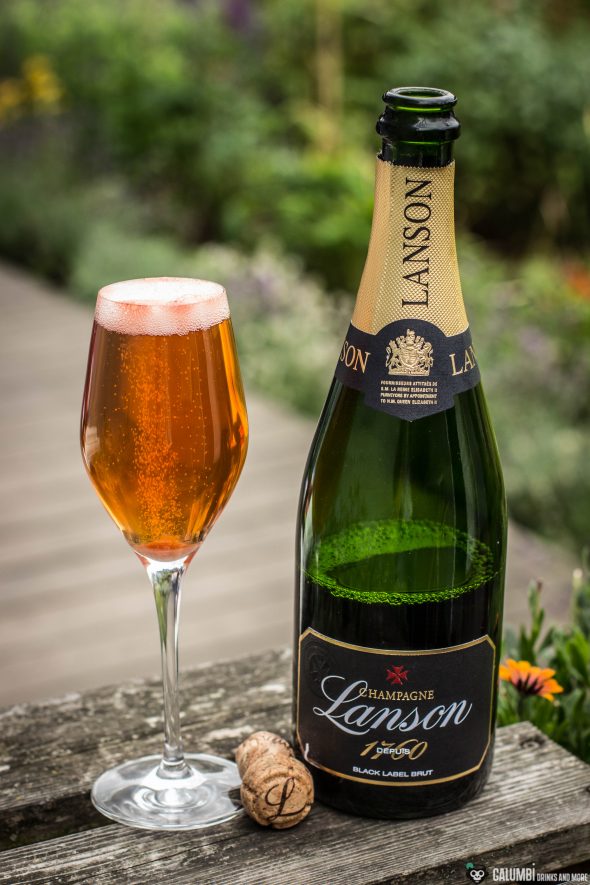 Preparation: First, add the sugar cube to the bottom of your pre-cooled glass and soak it with some Dashes of Angostura Bitters. Then pour in champagne and spray with the oil of a lemon zest and “rub” the edge of the glass briefly with the zest.

Garnish: none or optionally a lemon zest (I use the oil of the lemon zest, but don’t put it in the glass)

The next drink is a very nice opportunity to put champagne in scene with a matured rum (classically a Cuban). The recipes for the Air Mail cocktail that appear in various books, however, vary, so that personal preferences are important here. The drink was written down by W.C. Whitfield in the 1940s, but probably dates back to the prohibition period or even the time before. In many recipes there is a much higher proportion of lime juice – partly supplemented by orange juice – but I personally prefer a mixture of lime juice and some grapefruit juice. Here is my version of the Air Mail cocktail. 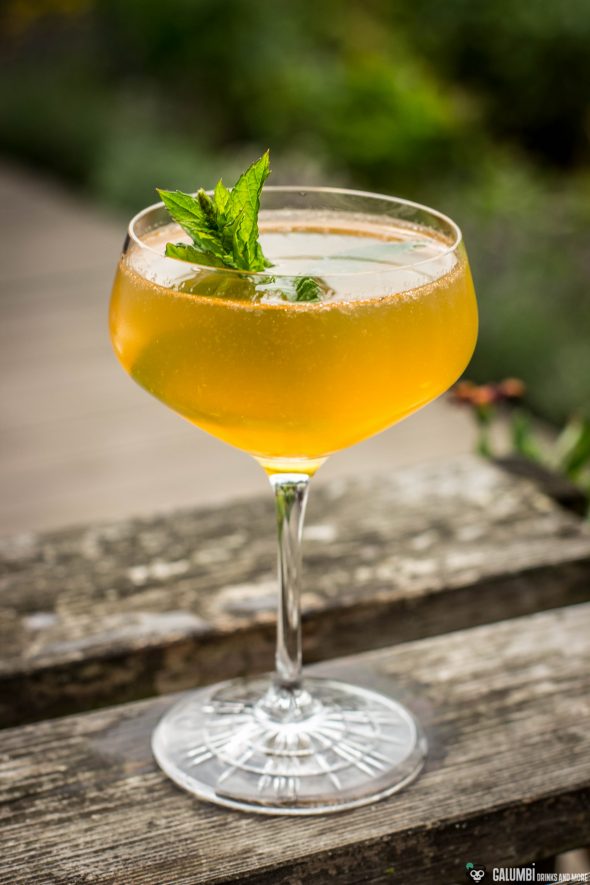 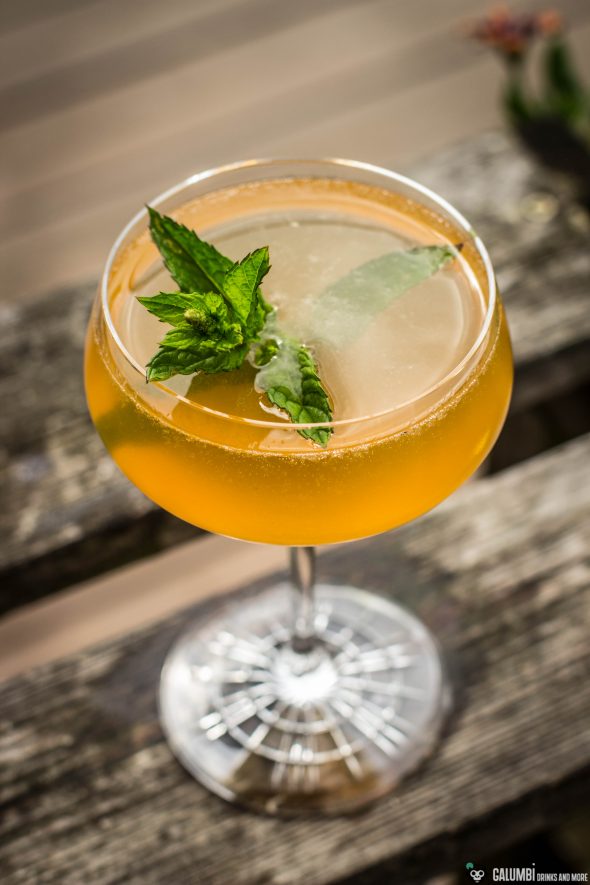 Honey syrup: Simply bring liquid honey and water at a ratio of 2:1 slowely to the boil in a pan and let simmer until you get a homogeneous syrup. Finally allow to cool.

One of my alltime-favorite champagne cocktails is the Prince of Wales. Telling his story here would definitely go beyond the scope, however a little bit of information is obligatory: The drink originated in the late 19th century and is named after the later King Edward VII, who had been the Prince of Wales for six decades during Victoria’s reign. It is actually speculated that he also invented the cocktail himself, since he was a well-known bon vivant who was not averse to alcohol. The range of recipes for this drink is as wide as for hardly any other drink. Recipes with or without pineapple exist, as well as those with Madeira, with crushed fruits, with or without maraschino, with rye, whiskey or cognac, with icing sugar, with syrup or unsweetened, with or without half fruit salad on the drink – the variations are almost unimaginable. I had a Prince of Wales for the first time at the Bar Le Lion in Hamburg, where it was served in a silver cup – but also the glassware varies from recipe to recipe! In my personal one, there is also a hint of chambord, which I use as compensation for the missing hand full of wild berries, which often finds its place on the drink. You might find that weird, like it or not: I love it! Therefore here it is: my Prince of Wales! 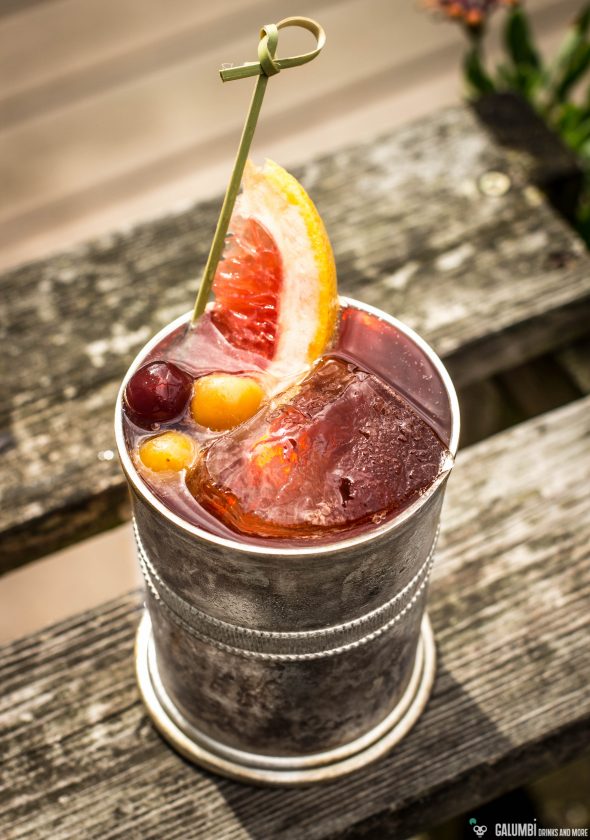 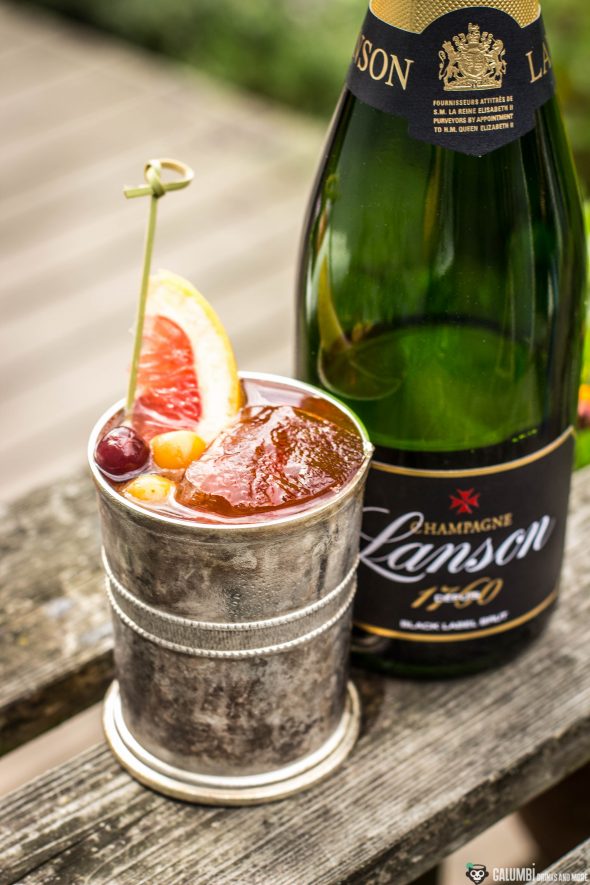 Recipe “Prince of Wales” (own interpretation):

Garnish: Griottines cherries and a slice of grapefruit 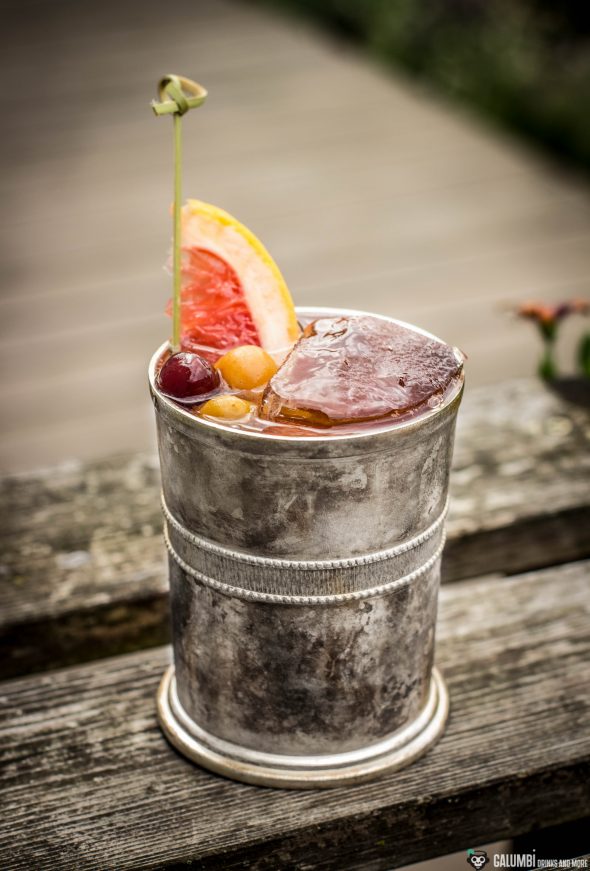 *Operating Galumbi – Drinks & More apart from the editorial work of course also occasions expenditure, why occasionally also paid advertisement can be found here. Nevertheless, the review of the product in this article reflects my opinion and was not influenced externally. Such a cooperation is only possible if I can recommend the advertised product with a clear conscience. This article is an advertisement, which results from a cooperation with the BORCO-MARKEN-IMPORT Matthiesen GmbH & Co. KG (the German distributor of Lanson Champagne). However, I purchased the sample bottle independently on my own.