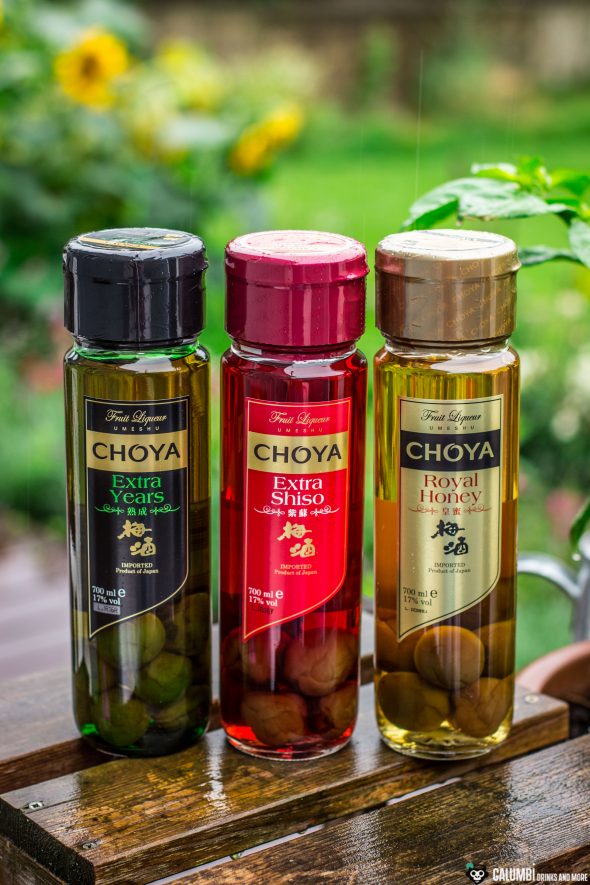 Today’s bottles are certainly one of the most striking bottles in any rack of liqueur. Presumably, many people have already wondered about these bottles during a walk through a well-stocked supermarket’s liqueur department. They might have asked themselves: What kind of liqueur is inside those tall bottles with the fruits in it? And what can you do with it? Well, I would like to concentrate on these and also on other questions today and introduce three bottles which I particularly like very much! (provided test products)

The three bottles listen to the sound names “Choya Extra Years”, “Choya Extra Shiso” and “Choya Royal Honey” and they all contain “Umeshu”. What exactly an Umeshu is, I am going to explain later on (although I have already used Umeshu in the past in a great cocktail), but first let’s take a quick look at the brand. Choya is a Japanese company specializing in products made from the Ume fruit. It was founded in 1924 and has been producing Ume liqueurs since the end of the 1950s. Meanwhile, Choya has offices all over the world, including one in the Japanese quarter in Düsseldorf, Germany. Although there are also products which are not based on the Ume fruit in the Choya range, the Ume is clearly the center and the soul of the company, especially in the form of various Umeshus. An Umeshu (梅酒) is a liqueur made with the addition of Ume apricots. Yes, you read correctly, the Ume fruit is actually an apricot, contrary to the widespread designation as Ume “plum”. But this is more a detail for botanical enthusiasts because even in Japan it is often referred to as Ume-plum. In its pure form, it is not really suitable for consumption since it tastes extremely sour and bitter, so there a various traditions of further processing existing in Japan (sometimes the Ume fruits are even smoked) and making Umeshu is one of them. For the production of Umeshu the still green Ume fruits are added together with sugar to Shōchū (焼酎) and allow to macerate in the spirit. Now, of course, you might also ask what exactly a Shōchū is. In essence, in it is a Japanese liquor that can be made from various basic ingredients, including barley, sweet potatoes, rice or sugar cane. For the production of Shōchū the fermentation process is caused by a special white mold (Kōji). The Shōchū that forms the base of the three Choya-Umeshus is made from sugar cane, a so-called kokutō shōchū (黒糖焼酎).

In Japan, Umeshu has traditionally been manufactured by many families at home. Furthermore, health-promoting effects are accredited to Umeshus which is often due to the very high vitamin content of the ume-apricot. 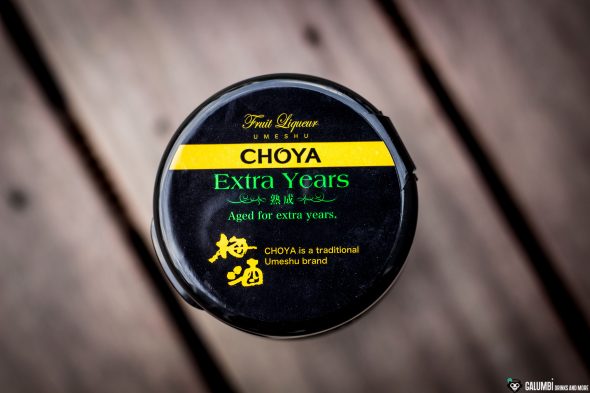 After this brief digression about the manufacturing background, first of all, I have to dispel a myth: Umeshu is not synonymous with the frequently used term of “plum wine”. Although Umeshu is often referred to as plum wine (even though we’re dealing with liqueurs), many liqueurs that are called plum wines have nothing in common with a real Umeshu. For example, the very popular bottles of plum wine some Chinese delivery services use to gift to you as accompanying liqueur when you order a meal are not Umeshus or should at least not be sold under that name! Often such cheaply produced products do not contain the slightest trace of Ume fruit, (or of any fruit at all) but are based entirely on added flavorings. So be careful when buying Umeshu!

But now let’s talk about the actual bottles, their differences and taste profiles. I would like to start with the Choya “Extra Years”. For the Choya Extra Years, only Ume fruits of the variety “Nanko” (南高梅) are used, which originate from the historical Kishu region (also Kii region), today Wakayama prefecture. They allowed to mature between two and three years in this Umeshu before it enters the market. The Choya Extra Years is bottled with 17% vol. 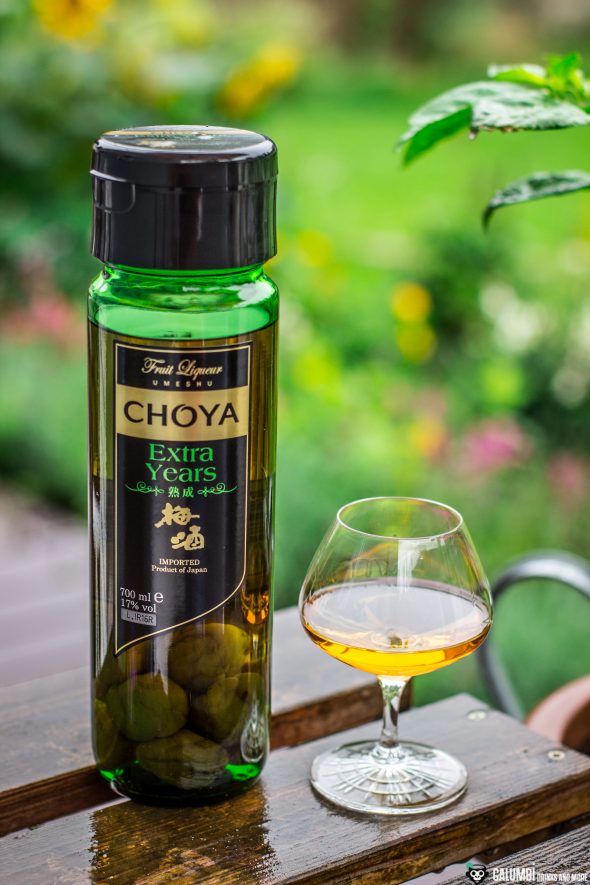 Taste: surprisingly fresh with the acidity of the Ume fruit, honey, again dates and halva. It turns out oily and sweet with an intensity that covers the entire oral cavity. A very aromatic liqueur that is hard to compare.

Also based on the Choya Extra Years is the second bottle that I like to review today: the Choya Extra Shiso. The most obvious difference here is the reddish color, not only of the label, but also of the Umeshu itself. This is due to the addition of Shiso leaves. The base is identical to the Choya Extra Years, but with the additional maceration of Perilla leaves, which are known as Shiso in Japan, this Umeshu not only gets a different color but also a different taste. Here you can clearly recognize the reputation as domestic remedy which traditionally adheres to the Umeshu in Japan. Also this one is bottled with 17% vol. 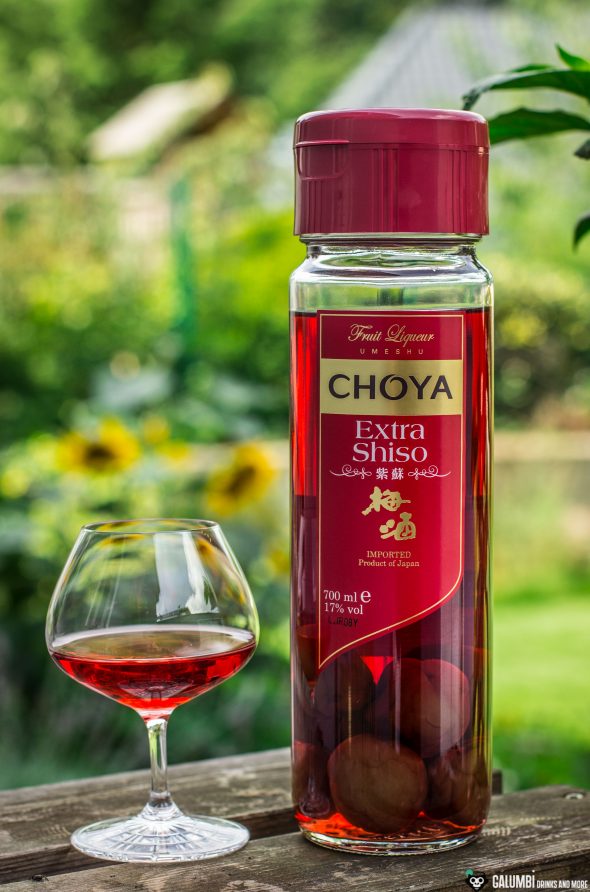 Aroma: On the nose it seems to be quite similar to the “Extra Years” at first: dates, honey and some lemon are once again present; the plum and stone fruit character steps a little bit into the background, but rosehip, sugared berries and some loose tea are stepping forward.

Taste: fruity, almost a little reminiscent of fruit tea, honey, again dates, plums, citrus juices mixed with herbal tones. I also like this one very much!

Finally, I would like to focus on the Choya Royal Honey. A very interesting product I was very excited about in the forefront. The sweetness of this liqueur, unlike the other two Ume liqueurs, does not come from the addition of sugar, but – you may have guessed – from honey. However, it is not only the honey that can contribute its flavor, but also the so-called “royal jelly” finds its way into this bottle. Royal jelly is the juice the honeybees use to raise their queens. This Umeshu is also produced exclusively with the Nanko-Ume and bottled at 17% vol. 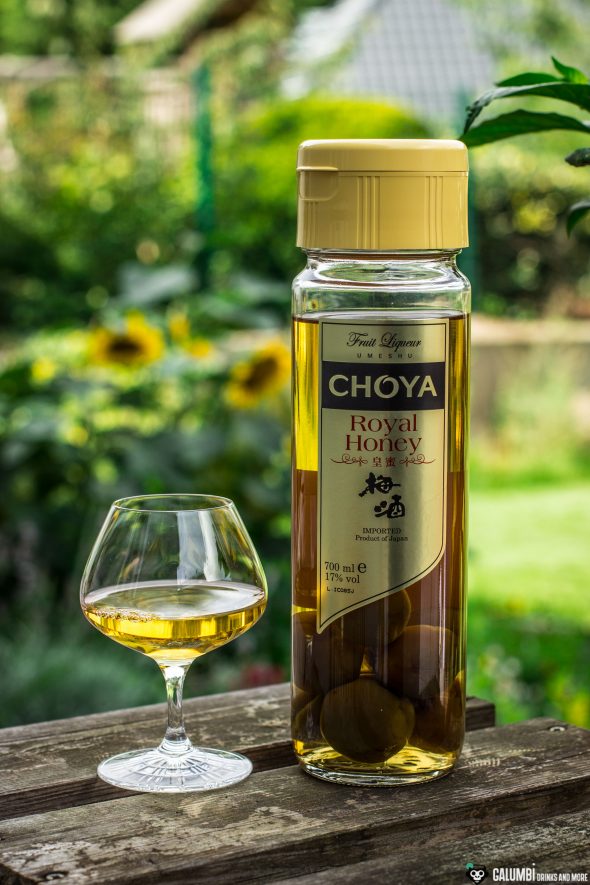 Aroma: The honey is unmistakable and also immediately present. It turns out to be an intense honey that reminds of lime honey with a fine vanilla. The acidity of the Ume fruit needs some time, but in the end it is there. I have to think of Baklava, strongly sweetened tea and of mead.

Taste: the acidity of the Ume fruit is more prominent on the palate, but it skillfully blends with a rich honey flavor. A little nut brings back the associations of Baklava. A fine glimpse of apricot shines through.

Finish: some loose tea, a sour freshness and honey

Buying sources: In well-stocked supermarkets, at specialized retailers or online.