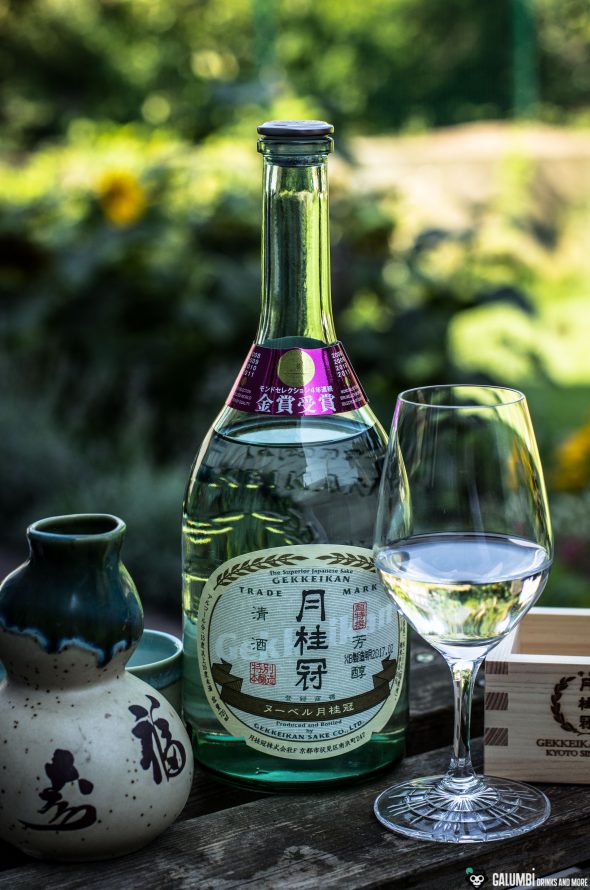 With my article about three different Umeshus I have already presented a famous Japanese drink with a proud tradition here on the blog (and also some marginal information on the Japanese spirit Shōchū). Nonetheless, the probably most famous alcohol from the land of the rising sun has not yet received my detailed attention: Sake. And that is exactly what I want to change today. (provided test product)

Sake (jap. 酒) is a rice wine. I guess that’s the basic fact most people already know. But before I will go further into detail (for example, that Sake is actually more beer than wine – in that respect, of course, the term “rice wine” is not really accurate), I would like to point out in advance that this article was not written with the claim of providing an encyclopedically comprehensive explanation of this beverage because the matter is simply far too complex. There are entire books that have been written about Sake and so I cannot approach the subject in such a way, for the pragmatic reason of time and space alone. But of course a little background is necessary and I don’t want keep that from the interested connoisseur.

Sake has been produced in Japan for a very long time (and should not be confused with the sweetened “Mirin” that is mainly used for cooking). The origins of the Sake probably date back to the third century, where a kind of fermented rice porridge was used in the context of Shinto rites (which was actually “produced” by young girls which chewed the rice and then spitted it into bowls). With the invention of controlled fermentation triggered by yeast fungi, the availability of Sake increased and it evolved more into a beverage. Anyone who has ever been concerned with the genuinely Japanese religion of Shintoism or witnessed some shinto ceremonies will surely have noticed the fact that Sake finds an ever-recurring liturgical use alongside salt and water. So it is not surprising that, in culturally aware Japan, sake is very deeply rooted in various historical ways and even if there is of course also alcoholic abuse even in Japan, sake is generally more associated with spiritual and cultural sublime activities (e.g. poetry, Hanami, etc.). 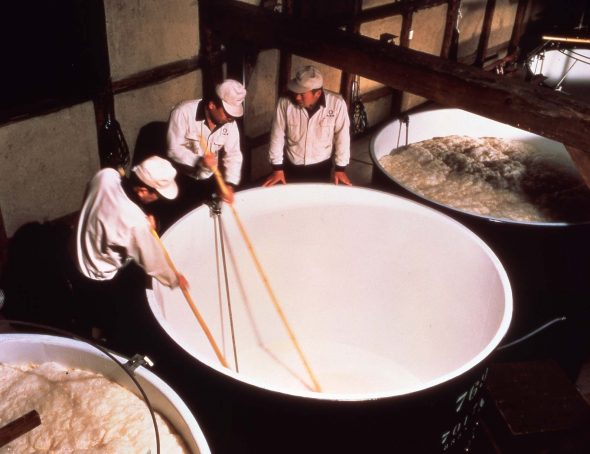 The main mash is made at Gekkeikan in Kyoto. (Source: Wikimedia under GNU Free Documentation License)

For the sake production, grains of rice are first polished. This may sound a little odd, but it is not a question of making the rice look any better. Instead, the outer layers of the grains should be removed in order to achieve finer results. The polishing rate of the rice gives you an idea of ​​the quality of the sake. In extreme cases, up to 50% or more of the rice grains are “polished away”. The polished rice is then steamed and mixed in tanks with water and the kōji mold (which is also obtained from polished rice) where a pre-fermentation with the help of lactic acid and yeast concentrate takes place that results into the sweetish Amazake (jap. 甘 酒). In the actual main-fermentation process, water, polished rice and koji are again filled into tanks and are then mixed with Amazake once a day for three days in total. Now the whole mash ferments for a period of 21 to 25 days. The “beer” produced this way is then filtered and once again stored in tanks between one and half a year. If the alcohol content is too high (sake has to have an ABV between 15 and 20%), it is lowered with a little extra water, if it is too low (especially the case with the cheaper varieties) it is artificially raised by the addition of some extra alcohol.

Commonly speaking, there are two types of sake, the futsû-shu (普通酒), or “ordinary sake” and the Tokutei meishō-shu (特定名称酒), or “premium sake” respectively “special-designation sake”. Approximately three quarters of the total Japanese sake production belongs to the futsû-shu segment. In the production of futsû-shu, alcohol is often added after the fermentation process, and also sugar and other flavorings can be added, and a different, usually cheaper rice is used. In Tokutei meishō-shu or premium sake, however, there are three subcategories, which differ essentially in terms of the polishing rate of the rice but also whether or not small amounts of distilled alcohol have been added after the fermentation. 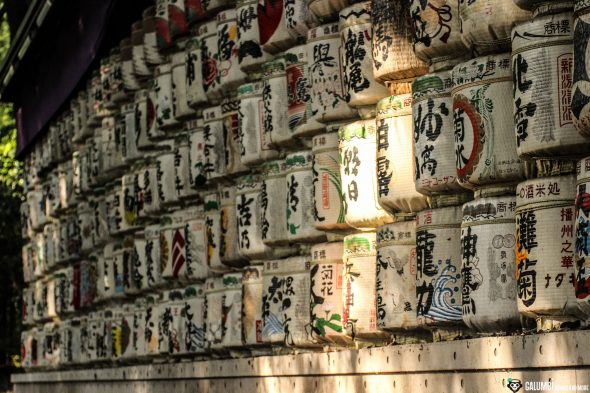 If you should think of sake as some notorious headache broth from the Asian restaurant, it may be due to the fact that you never really tried real sake or probably you simply drank too much futsû-shu. But in fact it is not uncommon to drink sake also hot or warm, although this is usually done in the winter season. There are also special temperature gradations but I don’t want to go into detail here. 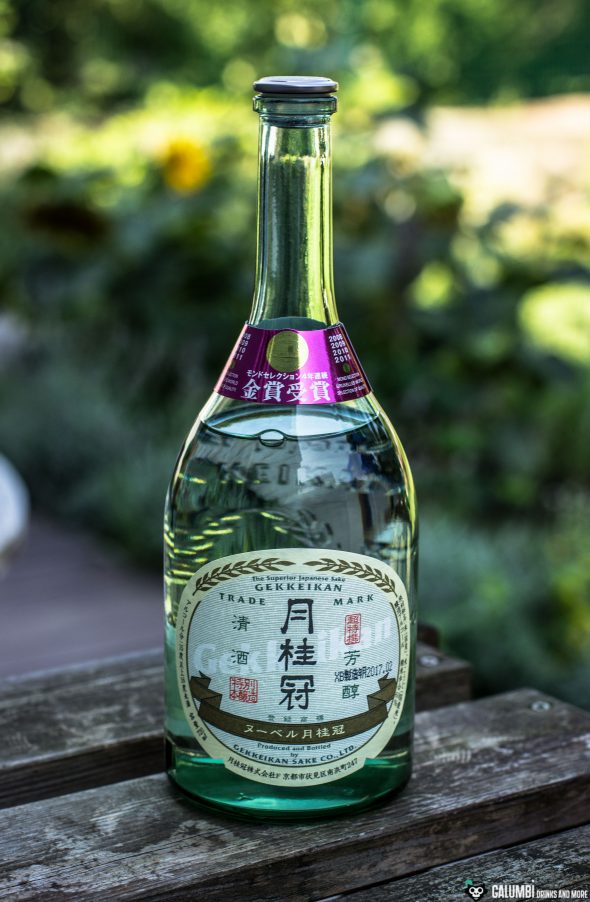 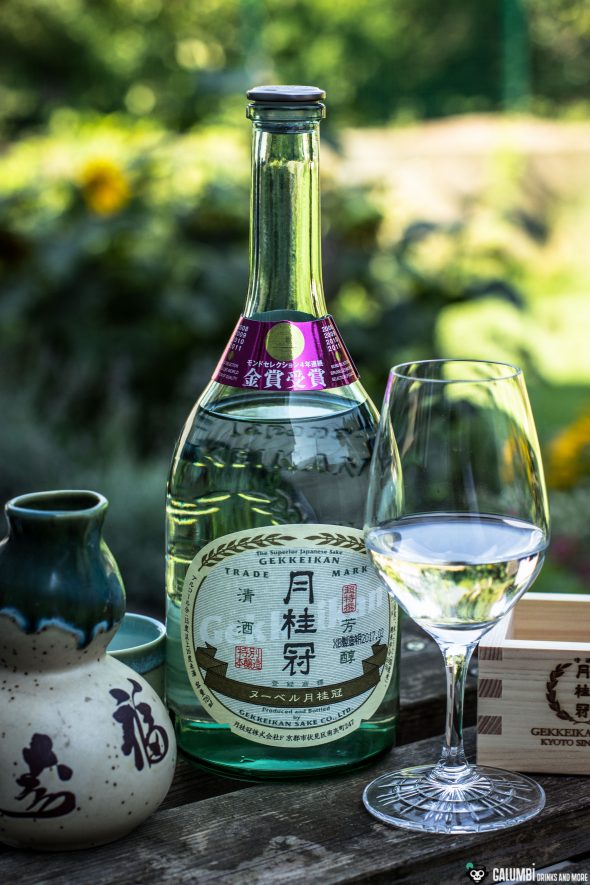 So, according to this now somewhat more extensive but still very tiny introduction (according to the complexity of the topic), I would now like to take a closer look at today’s bottle and briefly introduce it. And although the traditionalistic purist would surely indignantly turn away, in the next few days I will also check the sake for its cocktail suitability.

The sake I’d like to review today listens to the sound name Gekkeikan Nouvelle Tokubetsu Honjozo. Gekkeikan is the name of the sake brewery, Nouvelle stands for itself, Tokubetsu means “special” and Honjozo is the sake quality. So we are dealing with a nice entry-level sake from the segment of ​​premium sakes (see above). The sake brewery Gekkeikan is, however, not any simple sake brewery, with its founding date of 1637 it is one of the oldest companies of them all on the entire planet. It is located in the old Japanese Imperial capital of Kyōto.

As can be seen in the above category overview, this sake has a polishing rate of 70%, so 30% of the outer layer of the rice grains was polished before the rice was processed to sake. By the way, Gekkeikan was one of the first companies to fill and sell sake in bottles at the beginning of the 20th century. And since I am speaking of bottles: For me this bottle is a real eye-catcher. The slightly blue-green colored glass is provided with a beautiful label on which further information can be found in Japanese. On the back there is also a German-language adhesive label for the import. This Honjozo-Sake is bottled with 15.5% vol. and a little amount of distilled alcohol has been added. 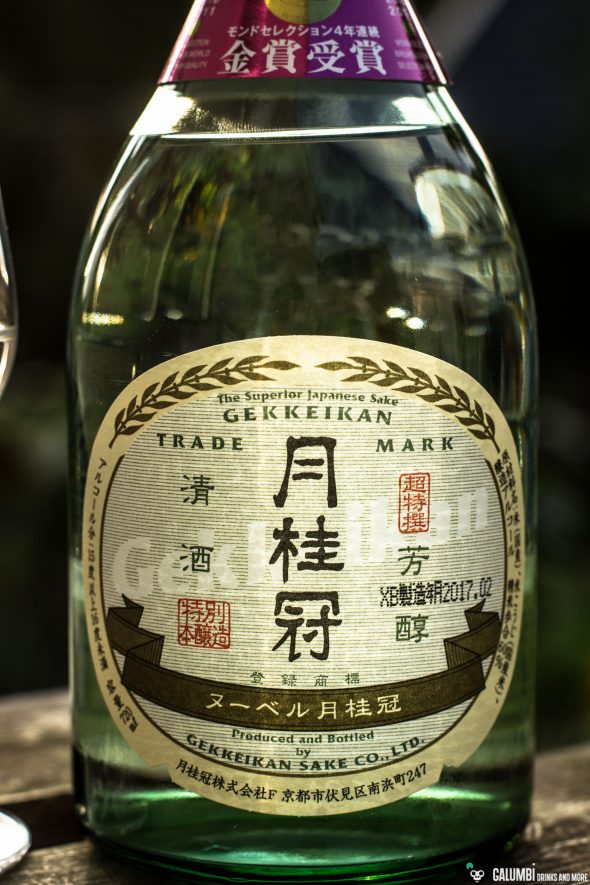 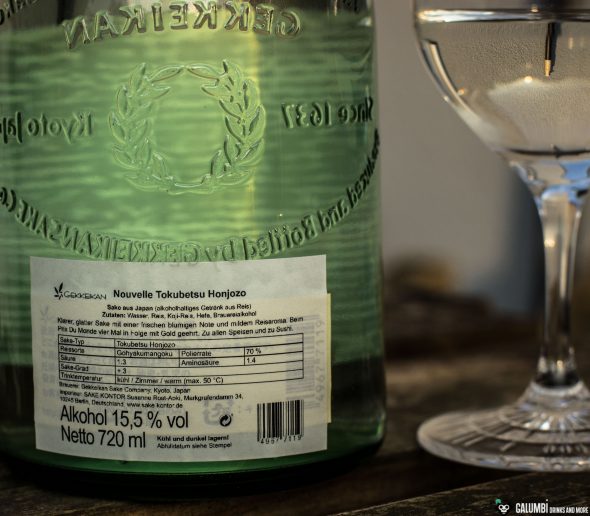 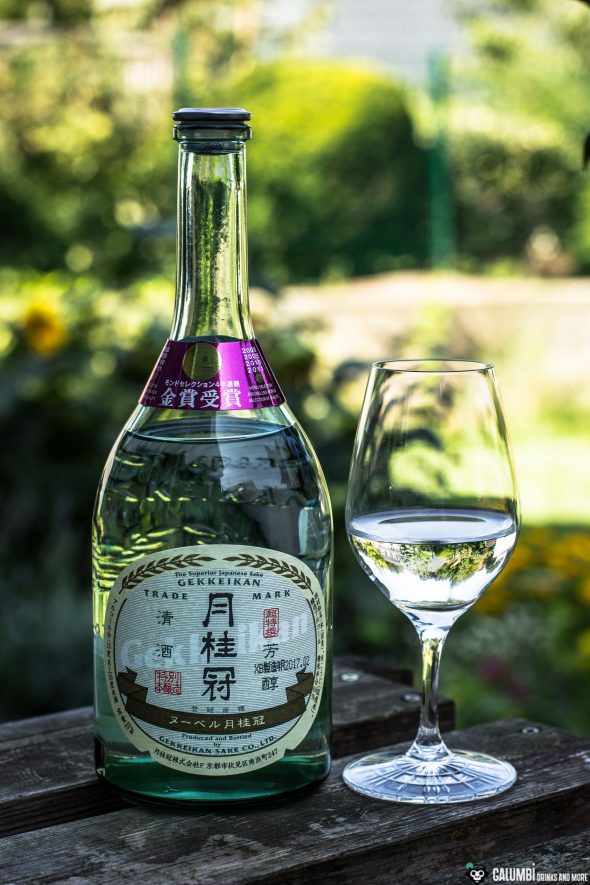 Aroma: The Gekkeikan Nouvelle Tokubetsu Honjozo runs into the glass with a very delicate, yellowish tinge. On the nose it leaves no doubt that it is a representative of its kind. The typical sake note (which is a little bit similar to dry sherry – a Fino or Manzanilla) is evident from the very beginning. I can scent subtly leavened rice, hints of fermented white grapes, yeast, a fine and floral note with an herbaceous impact is also there. In fact, some juniper comes through with a hint of flowers. You will realize quite quickly that you are dealing with a very complex drink, and in the course of time some new associations arise, such as distant mosses and a slightly moist soil.

Taste: Wow, the palate reveals the purity and fine character of this Honjozo brew. It is incredibly soft and smooth, associations of spring water, rice, dry white wine and herbs arise. There is not the slightest trace of alcoholic sharpness. A complex, light and dry sake that immediately makes you want more!

Whether Sake basically meets the personal taste, you’ll have to find out for yourself. I really appreciate this type of beverage and it was a great pleasure for me to scent and taste the subtleties of this sake: a really uncommonly delicate and aromatic experience! It is a great alternative to various events, but also as a cocktail ingredient it is highly interesting (as I will show in the next days and weeks).