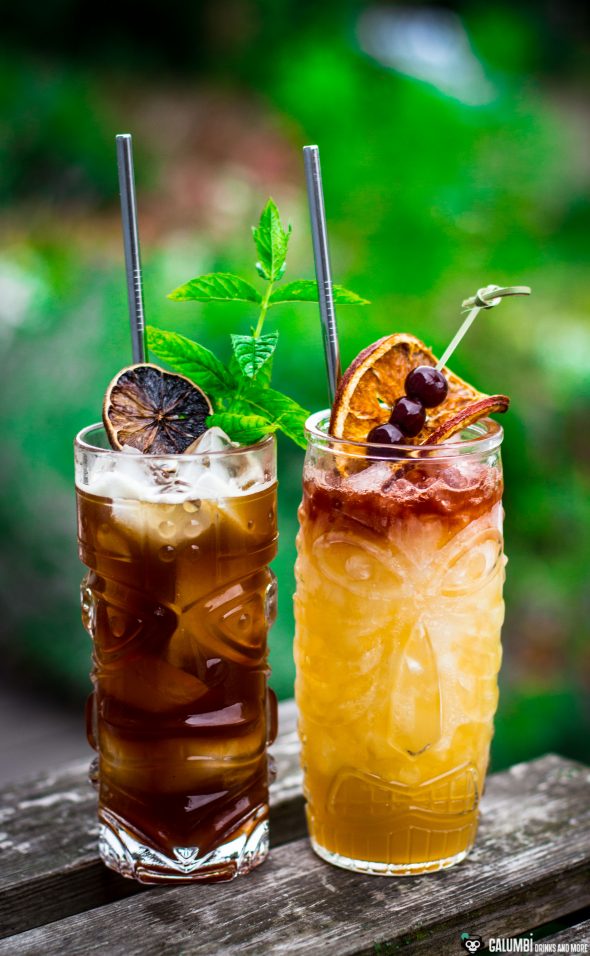 I can still vividly remember the time when I occasionally came across the term “Falernum” while browsing through cocktail books and recipe collections. At that time, my personal horizon was hardly comparable with today’s and somehow I must have categorized this particular ingredient as “something totally special” and simply avoided any recipes that called for it. Anyway, I can still recall the feeling when I first decided to research what it is: “Caribbean spice liqueur or spice syrup” – where the hell can I find something like that? (provided test products)*

After all, I ended up with the Velvet Falernum, a Falernum that even today most people might think of as the classic brand first (and indeed it is a solid product). To what extent the market has changed by now, you can easily see from the number of newly appearing Falernums (in recent months I have also reviewed the Amber Falernum and also the Revolte Falernum). Today I have two different Falernums waiting to be put through their paces. And what better way to do that than in a cocktail? But first things first!

The two Falernums are called “Old Judge Falernum” and come from Austria. Anyone wondering what the “great seafaring nation of Austria“ (irony off) has to do with a classic Caribbean cocktail ingredient will not get around the background story of the creator of those Old Judge Falernums: Markus Altrichter. Markus Altrichter worked as a bartender on the ship MS Deutschland and travelled to many parts of the world. Among others, of course, also to the Caribbean and there the island of Barbados is of particular importance. Barbados not only praises itself with the (supposed) invention of rum (in this context I have already written about the oldest still operating distillery Mount Gay), Barbados is also home to the Corn’n’ Oil, perhaps the most iconic Falernum cocktail in the world. 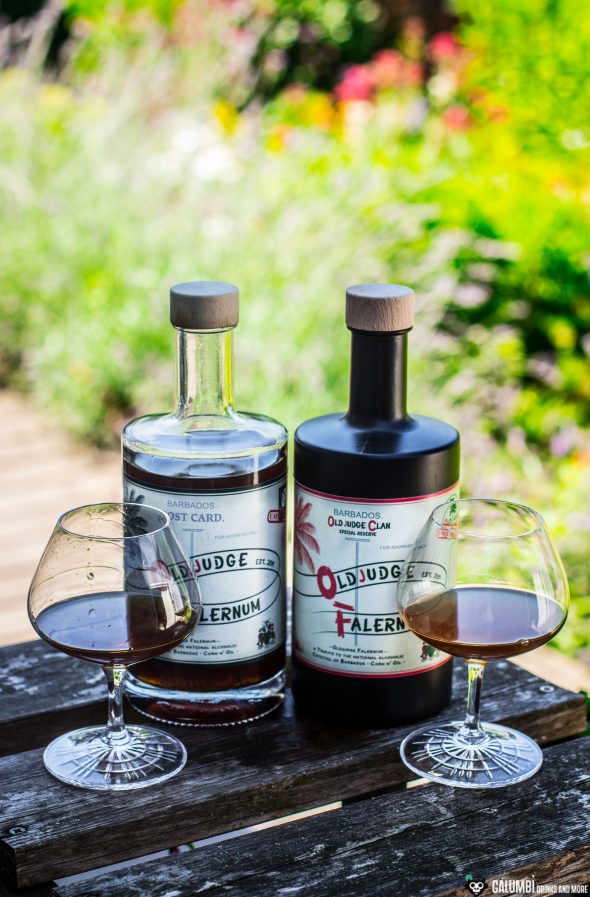 And Markus Altrichter was particularly fond of that same drink on shore leaves, especially in James Crahill’s bar. After some talk and some Corn’n’ Oils they had together, Altrichter and Crahill finally made friends and at a family barbecue of the Crahill family, Markus Altrichter managed to find out about a secret Falernum recipe (or at least the main features of it). Back in Austria, Markus Altrichter started his own production, which was initially intended for private use only. From 2016, it was possible to access some of the small numbers of bottles via Facebook (with a different recipe at that time), until the Old Judge Falernum finally arrived where it is today with its own website and somewhat larger distribution.

It soon becomes clear that the alcohol content alone is an argument for different ways of using it in cocktails, depending on what you would like to achieve. But of course, the alcohol content of both Falernums is not the only difference: While the alcoholically somewhat weaker Old Judge Falernum consists of two different Barbados rums, sugar and natural spring water from Austria, Indonesian ginger, cloves from Mauritius, cinnamon from Egypt, pimento from Jamaica, lime from Brazil and vanilla and almond extract, the Old Judge Special Reserve Falernum also uses pineapple and overproof Jamaica rum.

And even though very few people use a Falernum as a drink enjoyed neat, nonetheless I want to taste both Falernums that way. 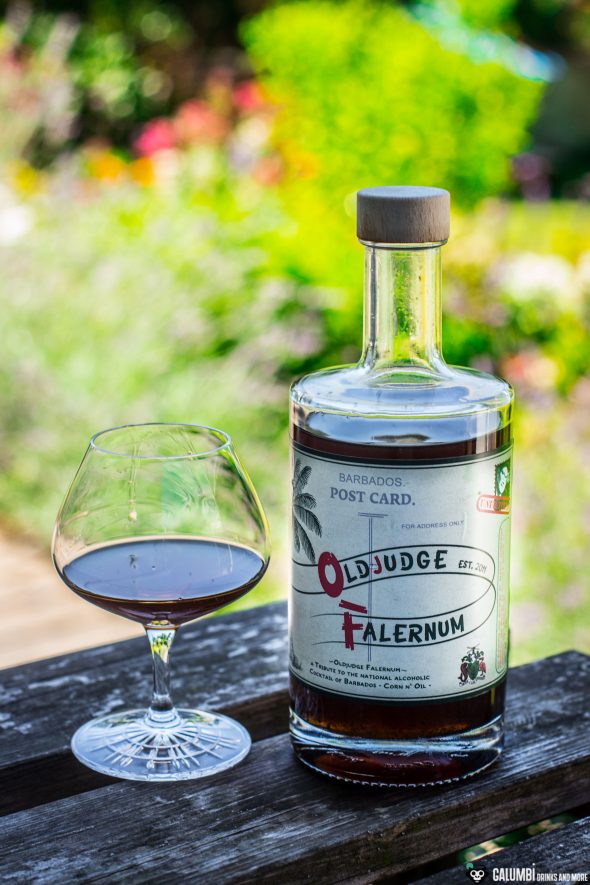 Aroma: On the nose you’ll find a beautiful potpourri of spices, a honey-like sweetish scent rises up from the glass. Cloves, cinnamon and pimento are particularly present, but also some vanilla and a hint of almond. The rum remains rather subtly in the background, but is also recognizable with a little bit of concentration.

Taste: Ok, here you have to keep in mind you’re tasting a liqueur syrup. First of all, an intense sweetness dominates your taste buds. The spicy tones listed above are complemented by a certain freshness of ginger and lime, which creates a very appealing taste.

Aroma: As expected, a fundamental similarity to Old Judge Falernum cannot be denied when trying the Old Judge Special Reserve Falernum. The aroma here is basically very honest because it reveals both the addition of overproof rum (which cannot be differentiated in its details, though), but does have a decisive influence on the aroma. The same applies to a fine and natural pineapple note.

Taste: The stronger alcohol content is immediately noticeable, but not by any kind of pungency, but by a slightly different emphasis of the central aromas. The Old Judge Special Reserve Falernum seems a bit more mature and also less sweet (it is nevertheless very sweet), the pineapple is very well integrated and characterizes this variety unmistakably.

Finish: long, oily, with the freshness of pineapple and spices. 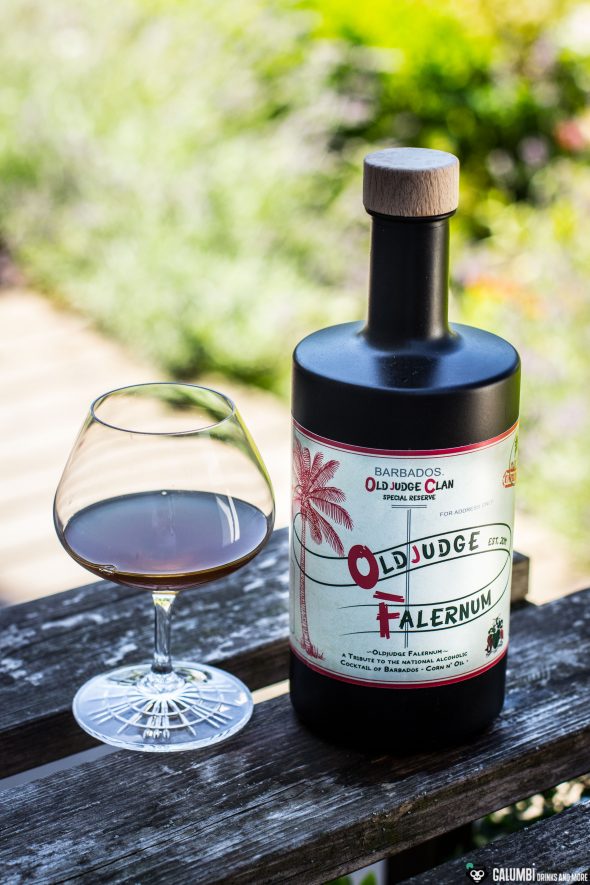 Well, what do you do with those Falernums? Of course, I could have just mixed one Corn’n’ Oil with each of it (and I will certainly do that in the future), but since I already introduced this drink here on the blog, I wanted to do something else. The choice finally fell on two different Tiki cocktails: the Spring Street Swizzle Punch and the Montegomatica. Both drinks are excellent Falernum cocktails, which also differ significantly from each other. 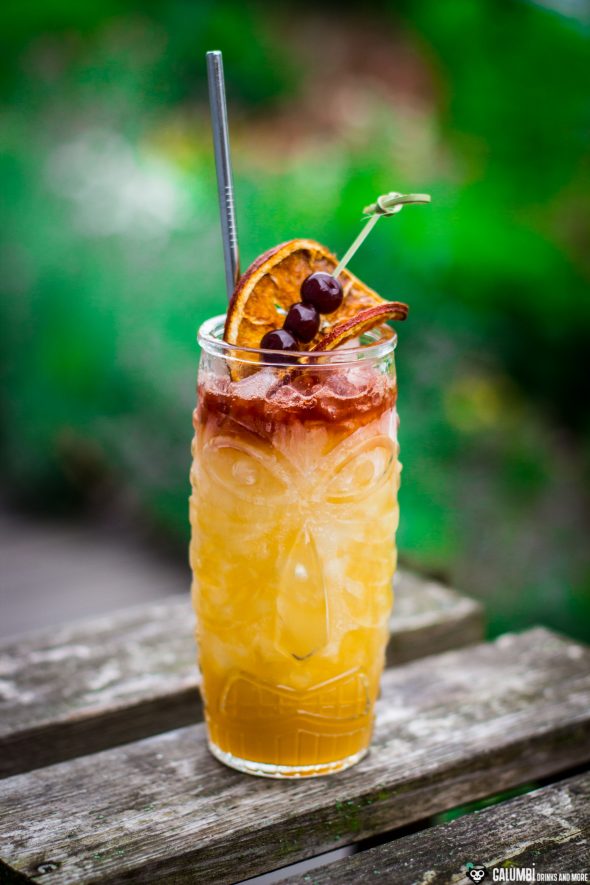 The Spring Street Swizzle Punch is an interesting Swizzle drink, which I got to know through an article of the Imbibe magazine. It comes from the Warehouse in Charleston and combines various juices with a vanilla spice syrup, Falernum and rum. I deviated somewhat from the original and replaced the vanilla spice syrup with Galliano Vanilla – originally due to a lack of time – but found the result so good that I would like to present this variant here. Since the pineapple tones in the Old Judge Special Reserve Falernum would go down in the face of pineapple and orange juice, I used the regular OId Judge Falernum here. I’ve used the Plantation O.F.T.D. and the Plantation Three Stars as the basis. 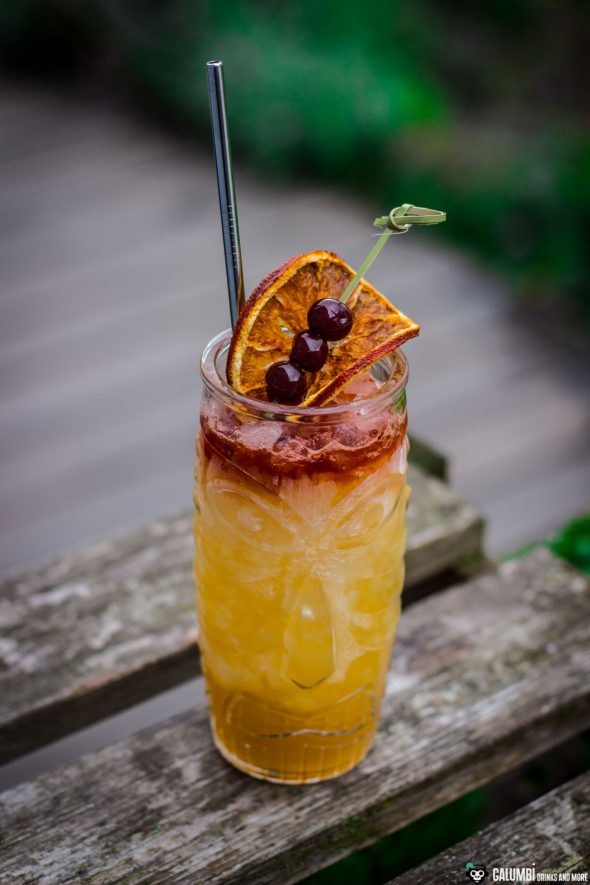 Preparation: Pour all ingredients except the bitters onto crushed ice in your glass and “swizzle” with a swizzle stick until the glass turns cloudy from the outside. Fill up with more crushed ice and put bitters on top.

The Montegomatica was invented by Adam Bryan in Austin, Texas and wants to be different than the Spring Street Swizzle Punch. Although this tiki drink is also a rum cocktail (surprise!), the addition of Fernet and significantly less juice gives a rather different taste experience. And although I really like Fernet (even neat), the Fernet content here was a little too high – it simply overlaid the other flavours. So I reduced the Fernet part a bit and left more room for the Old Judge Special Reserve Falernum. A good decision! 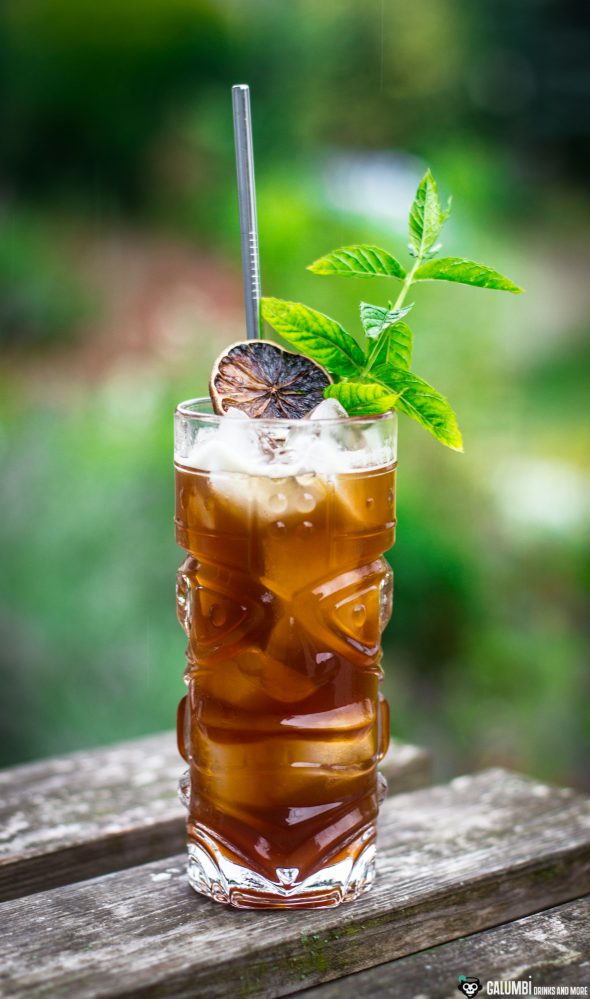 Preparation: Shake all ingredients vigorously on ice and strain into a glass filled with fresh ice cubes.

In both cocktails the Old Judge Falernums perform very well – a really nice enrichment for the bar world from Markus Altrichter. A definite recommendation (the bottle price is approx. 25€)!

One thought on “The Old Judge Falernums & some Tiki thoughts”