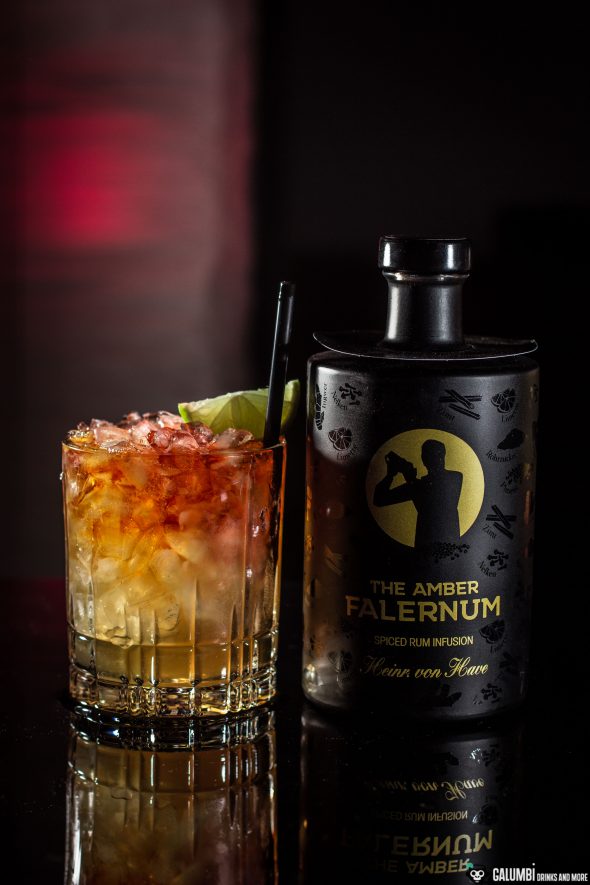 For a long time (at least in Germany), Falernum was an exotic ingredient that only few knew, which was hard to get and which some therefore even avoided to use. Besides the Velvet Falernum, for many years there were basically no real alternatives, at least if you did not want to make a Falernum yourself from rum, sugar and spices. The latter can be definitely worth the effort, but of course it takes a lot of time to do it and you probably have to face some unsuccessful attempts. So it is very nice indeed that the market situation has changed in the meantime. (provided test product)*

With the Revolte Falernum I have recently presented a new, beautiful, and very ginger-spicy Falernum here in the blog. Today I would like to take a closer look at another very promising Falernum and put it to the test: The “The Amber Falernum” from the house of Heinr. Von Have. Heinr. Von Have is a traditional Hamburg winery, which also produces spirits and liquors. Under the name “The Amber Falernum – Spiced Rum Infusion” it seems that the company now wants to expand more into the cocktail segment and to offer bartenders a new product for their Caribbean style cocktails. For this Falernum, barrel-aged Caribbean rum (there is no further background information on the rum) is combined with sugar and different spices. These spices are also shown on the attractively designed bottle: limes, ginger, cinnamon, allspice and cloves. 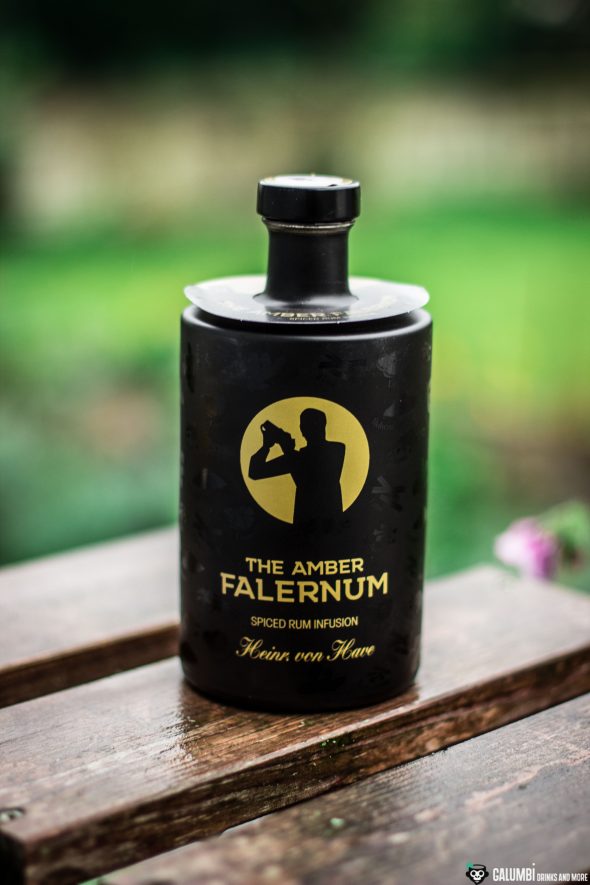 And even if a Falernum is rarely served neat, I would like to find out more about its aroma and flavor here. 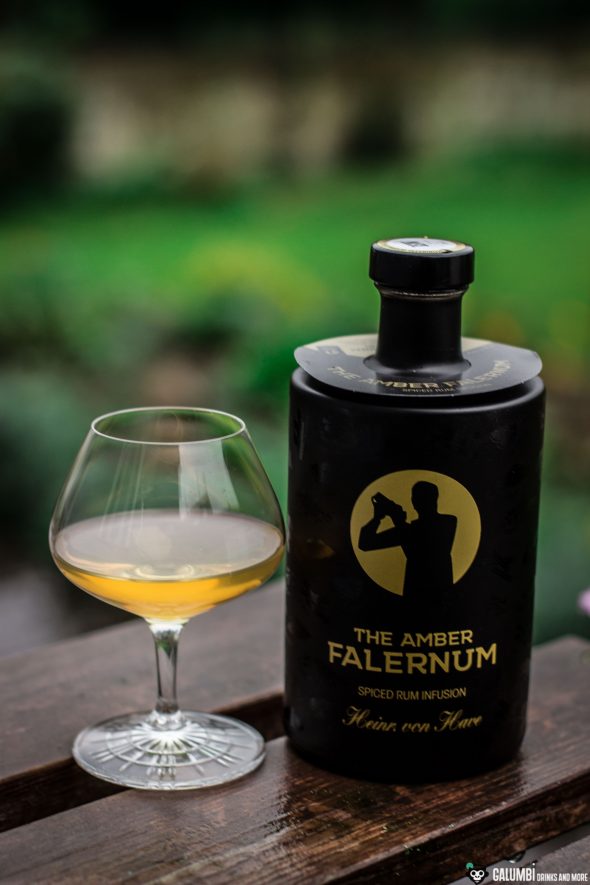 Aroma: On the nose, lime, ginger and cinnamon are dominant at first. Over time, cloves and allspice are also present, so that there can’t remain any doubt about the authenticity of the declared ingredients. The scent is aromatic, very Christmassy even for a Falernum (they all tend to be a little bit like that) and definitely on the fresh and spicy side. The rum base remains subtle.

Taste: The taste of the Amber Falernum is not as sweet as I had expected, spicy and with a fine and beautiful sharpness of the ginger. The used fruits and spices can also completely be found on the palate. The Amber Falernum lacks a little bit of full-bodied character and depth, but in the end it is the use in a cocktail that is most relevant for me and it was able to absolutely convince me in this respect (see below)! 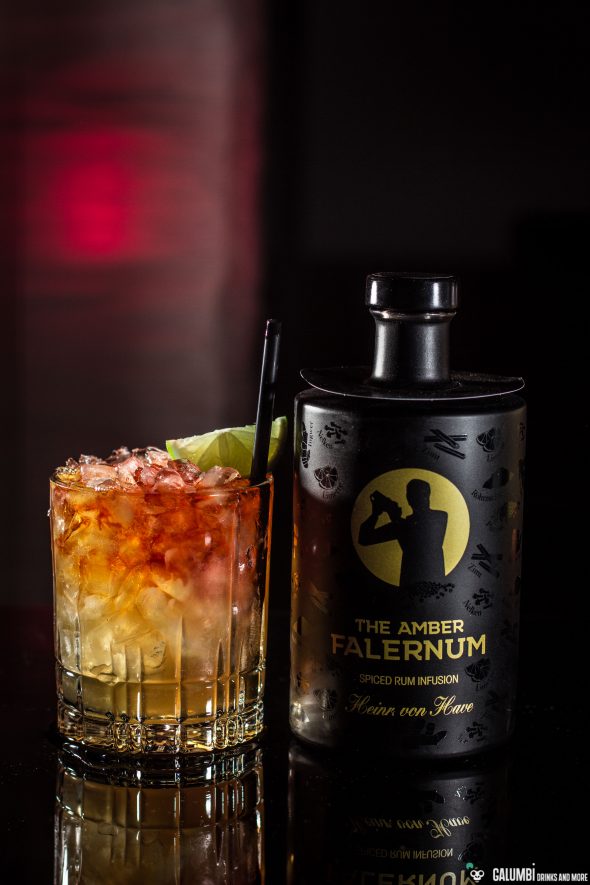 When it came to a cocktail I decided to use it in a true heavyweight of the Caribbean drinking culture: The Corn ‘n’ Oil. The Corn ‘n’ Oil is a classic cocktail from the island of Barbados, whose exact historical roots remain in the dark. The combination of rum and lime is found in so many different cocktails throughout the Caribbean that it is simply impossible to create a historically reliable genealogy of that particular drink. It is the Falernum which distinguishes the Corn ‘n’ Oil essentially (in addition to the type of rum used) from a Daiquiri or a Rum Sour (similarities to a Ti Punch are also undeniable). If you have a look at Wikipedia, you will read about the use of “Blackstrap Rum” as an essential part for this drink. Unfortunately, Blackstrap Rum is not always that easy to define. If you stick very close to the word “Blackstrap”, you will find only the Cruzan Black Strap Rum, which is not made in Barbados, but in St. Croix (one of the Virgin Islands). In Barbados itself there is no rum with this name. However, a cocktail associated with a particular nation (by name or by its context of origin) does not necessarily always use the native rum, as for example you can see when it comes to the Royal Bermuda Yacht Club. In that sense, it helps to think about what role a Blackstrap Rum plays in cocktails.

Against this background, two things are important: The taste should offer very strong and intense notes of molasses. Blackstrap is a particularly heavy and intense triple-boiled molasses with very dark and powerful aromas. Accordingly, the rum should also be that way. So whether you are choosing the Cruzan Black Strap Rum, Gosling’s Black Seal, or simply a Jamaican Myers’s (or others) is up to you. I have a very close connection to Myers’s Rum, which is why I like to use it in my version of the Corn ‘n’ Oil. 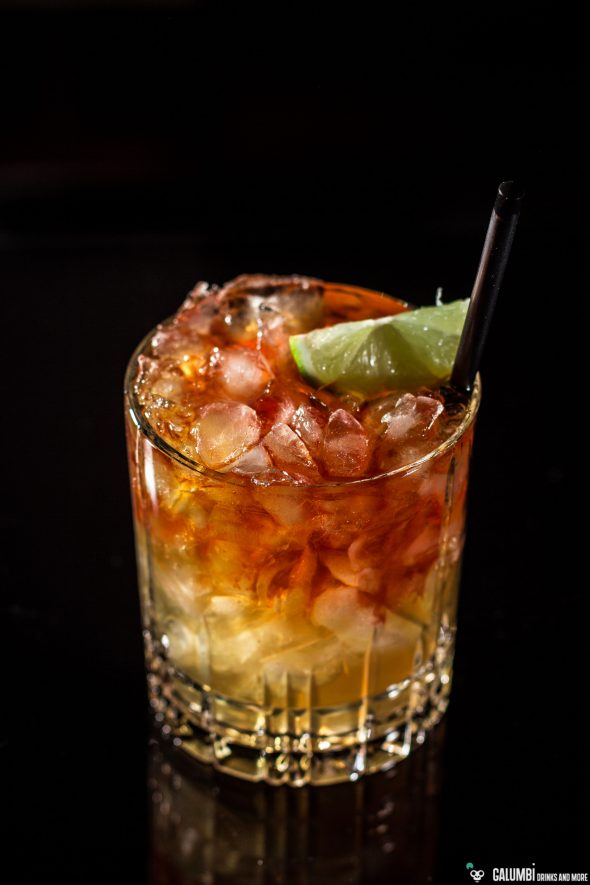 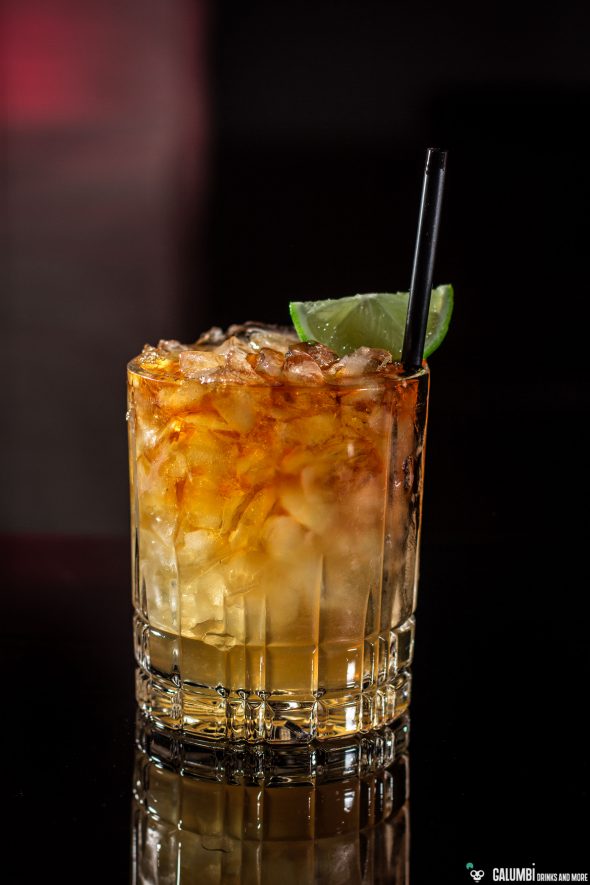 The second important aspect is the color of the drink. So we’re dealing with a specific requirement of the Corn ‘n’ Oil cocktail: The cocktail is not called Corn ‘n’ Oil by coincidence but mainly because of its visual appearance. A corn-like yellow color is crowned by a dark, oily float – this is what the ideal Corn ‘n’ Oil looks like. Therefore – and to honor the Bayan origin of the drink – I use the “Blackstrap Rum” only as a float and not as the actual basis of the drink. This is where the Mount Gay XO comes in, which really works well with the Amber Falernum (and also creates a beautiful color that more than lives up to a proper Corn ‘n’ Oil). Some people may shake their heads when they hear about a combination of high-quality rum like the Mount Gay XO with rather cheap rum like the Myers’s in one and the same drink, but here I can only recommend trying it out. I am absolutely convinced of the result!

Preparation: The cocktail is built inside the glass. Fill the glass with crushed ice, add Mount Gay XO, lime juice and Falernum and stir until cold. Add more crushed ice, if necessary, than float with Myers’s Rum and add a few dashes of Angostura Bitters on top.

Garnish: quarter of a lime 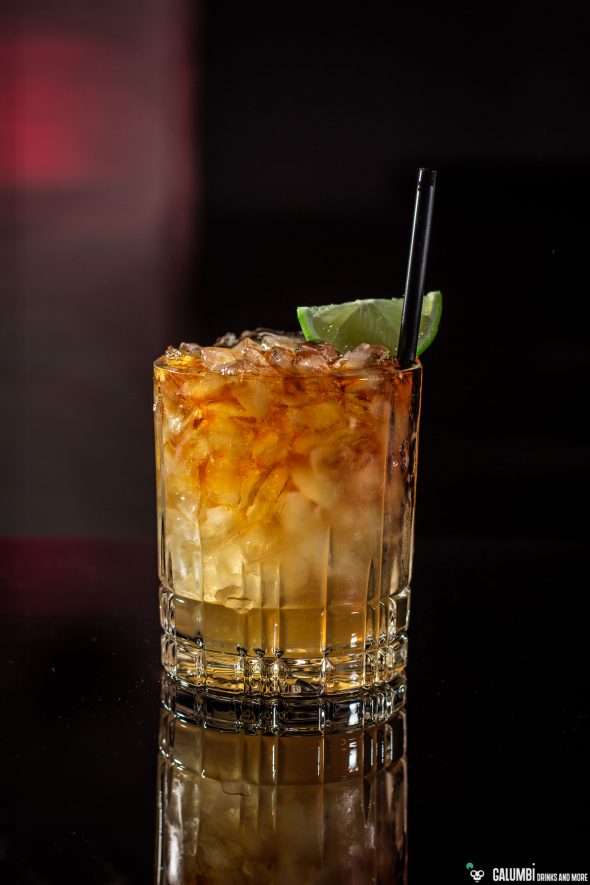 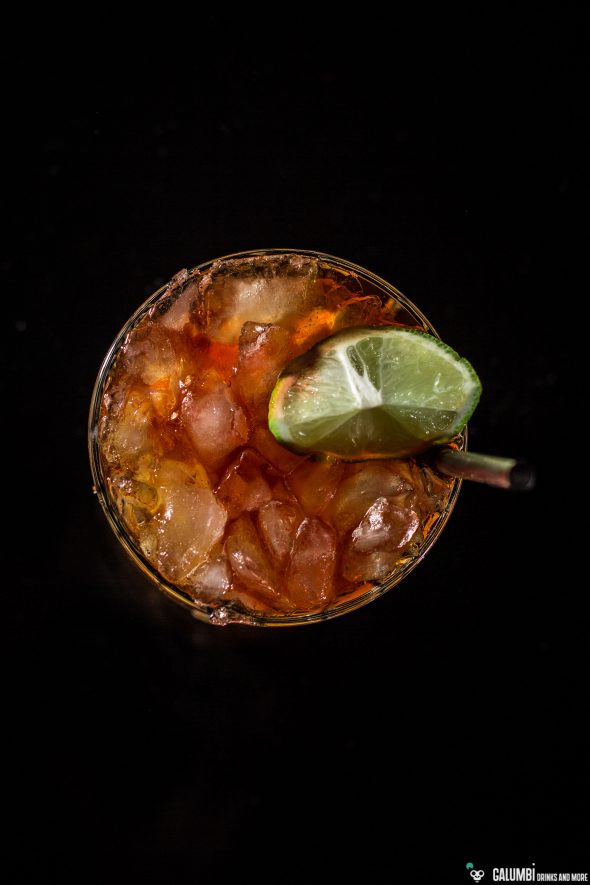 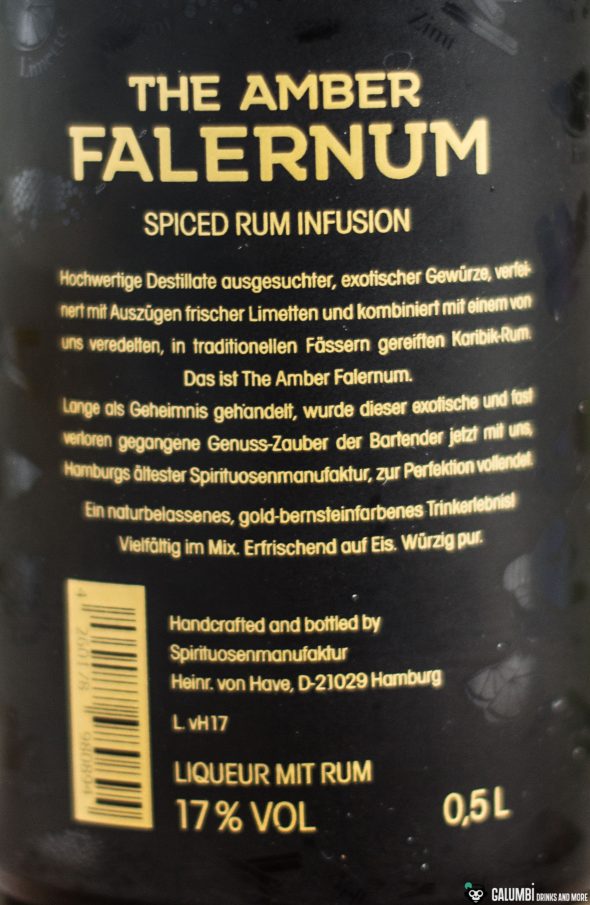 Buying sources: At specialized retailers or online. The Amber Falernum is bottled at 17% ABV and costs about 25 Euros.

One thought on “Pure Spirits: The Amber Falernum & The Corn ‘n’ Oil”