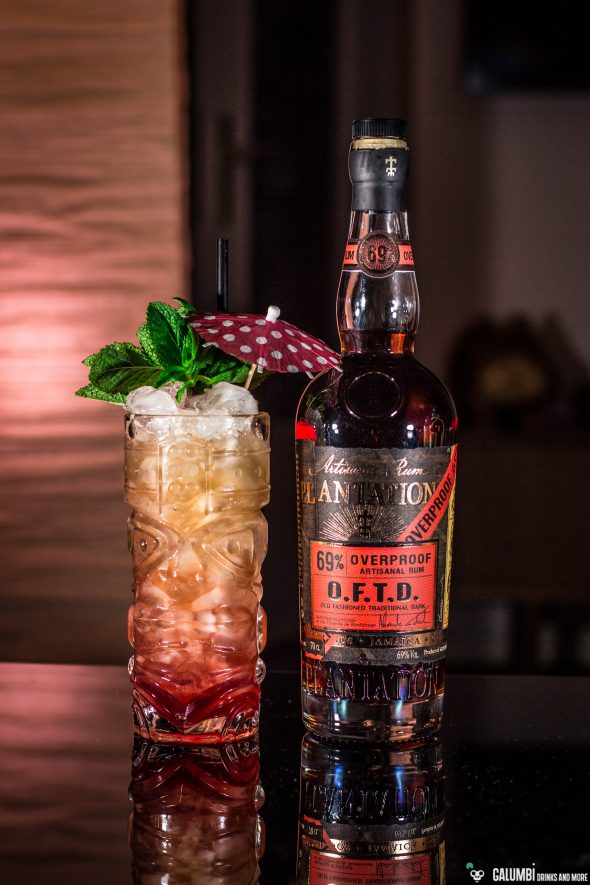 Today it’s once again about rum; in combination with another cocktail recipe. And since many people still have to recover from the all those April fool hoaxes, I did not want to take the matter too seriously and therefore decided to create a Tiki cocktail. The rum I’m talking about once again comes from the Plantation series and is certainly the most potent ship in this fleet. (provided test product) 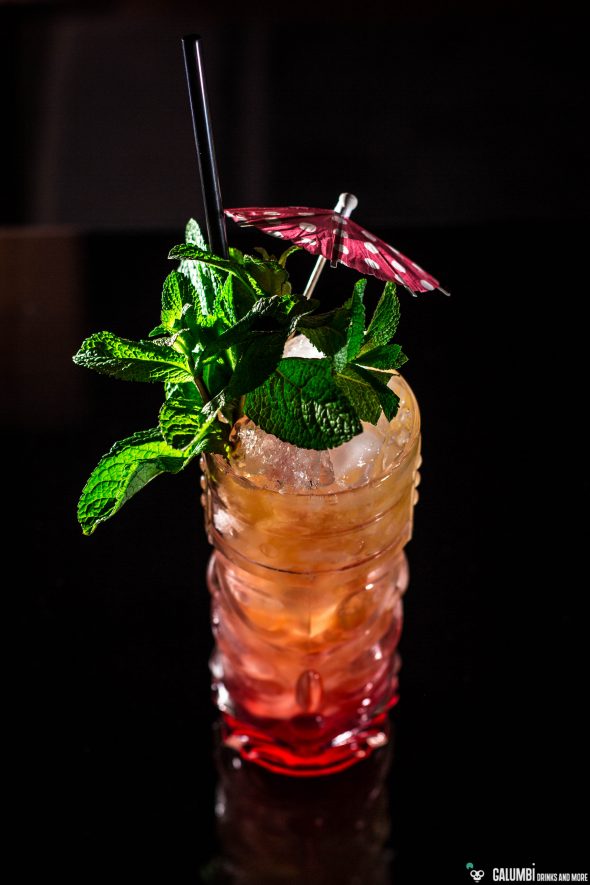 The Plantation O.F.T.D. Overproof allows no doubts about its agenda and when you see the bottle you can almost hear a voice saying: “I come with 69% ABV. I am strong, I am dark and I am not a rum to be trifled with!”- And this is true in many respects. Even if I will use it later in a Tiki drink (which should never be taken too seriously), you should not take 69% ABV easy. If you choose to have it neat, I can strongly recommend to dilute it with some water if you do not want to overpower your taste buds with alcohol. But nonetheless it is clear: this rum is a bombshell. In terms of content, taste and even when it comes to money because with a price between mostly 25 and 30 euros you really get a lot for your money.

But one after another: “O.F.T.D.” stands for Old Fashioned Traditional Dark and that is certainly a programmatic name. The house of Ferrand (in person of cellar master Alexandre Gabriel) has worked together with six rum experts with different personal backgrounds in order to create this rum: Martin Cate, rum expert and owner of Smuggler’s Cove in San Francisco, Jeff “Beachbum” Berry, world-famous Tiki author, Paul McFayden, owner of London’s Tiki Lounge Trailer Happiness, Paul McGee, owner of Chicago’s Tiki Oasis Lost Lake, Scott Schuder, owner of Parisian Tiki bar Dirty Dick and cocktail historian David Wondrich. This concentrated and personalized expertise is responsible for a rum that was created with tribute to the tradition of the old sailing ship era. On the ships of the Royal Navy (as well as on ships of other fleets), rum was an integral part of daily sailing. And since the flammability of gunpowder still had to be ensured after accidental contact with rum, these rums had to have an alcohol content of more than 57% ABV. This was the point where it was guaranteed that the gunpowder is still flammable. This had to be proven via test (proof), which is why you call a rum “Overproof” when it has 57% ABV or more; below that it is “underproof”. And because the sailors frequently diluted their rum with water, or mixed it in their punches (spirit, water, lemon juice, sugar and spices), it had to be strong enough to stay aromatic even after dilution. So it had to be: strong, dark and aromatic. Et voila: the Plantation Old Fashioned Traditional Dark Overproof Rum. 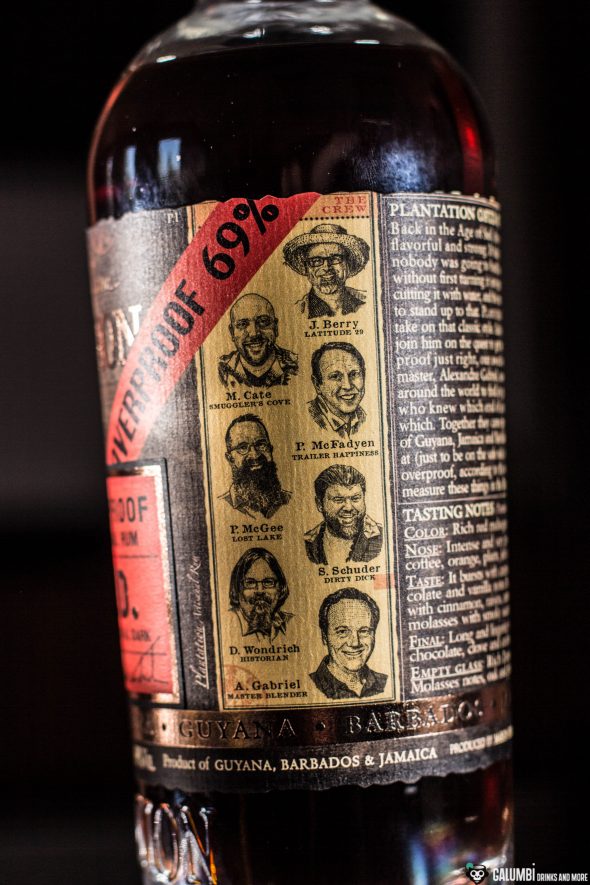 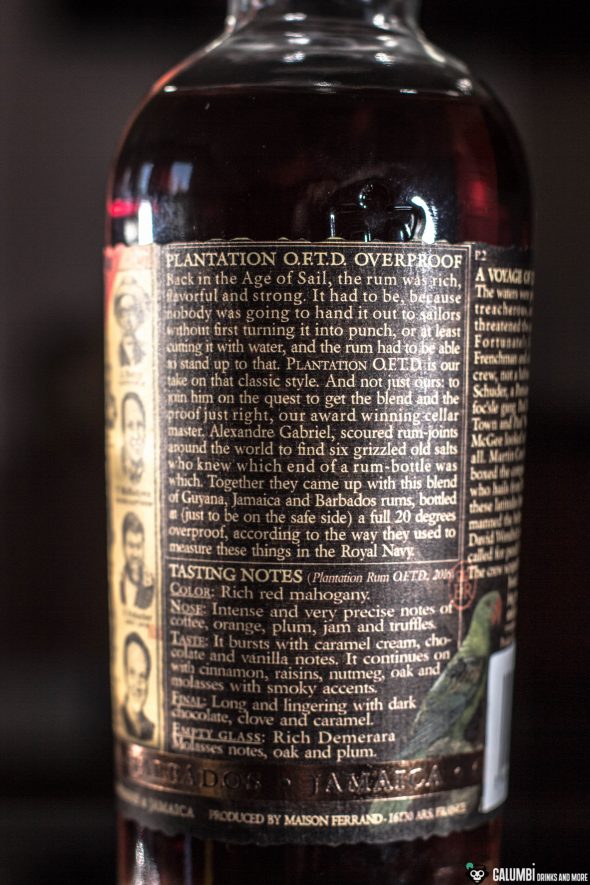 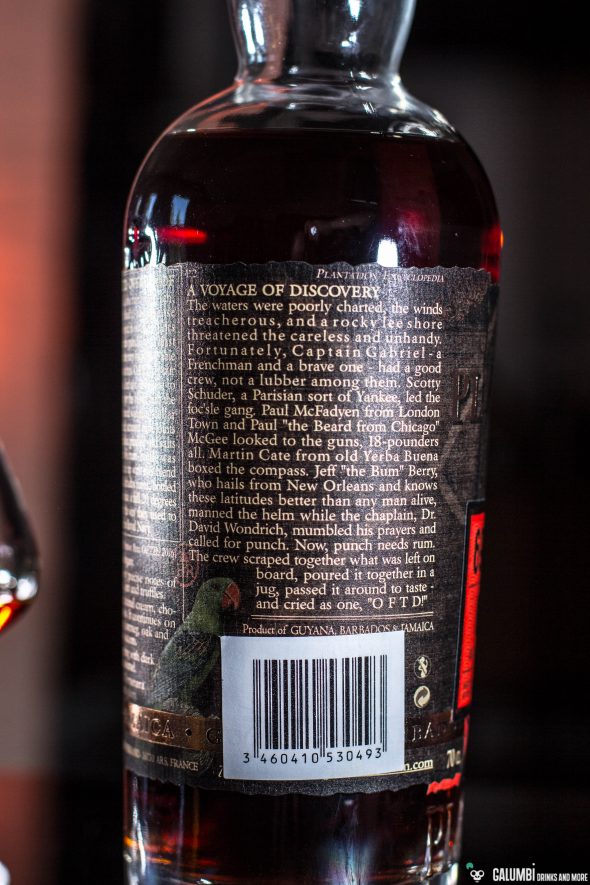 In fact, this rum is not artificially colored and – this definitely deserves a very laudatory emphasis – not sweetened with sugar (unlike other Plantation Rums, where a little sugar is added before the bottling). In contrast to the old Plantation Original Dark Overproof which the Plantation O.F.T.D. Overproof now replaces in the Plantation-Range, there is no Trinidad Rum included here anymore. Instead, we are dealing with a blend of Rums from Jamaica, Barbados and Guyana. The Guyana rums matured in new and old oak barrels for one to two years, the Barbados rums for two to five years in old barrels (former Bourbon barrels) and the Jamaicans for one to two years in new and old oak barrels. There is also one Jamaican rum included which was allowed to mature for 14 years in new oak barrels. To what extent, however, is not known.

But before I will now completely attend to the tasting notes, I would also like to say a few words about the cocktail that I would also like to introduce here. I really did not have to think long about it and thus it was immediately clear that it should be a Tiki drink (considering how many Tiki experts were involved in the creation of this rum). Inspired by the Caribbean Punch of Don the Beachcomber, my twist differs from the original recipe at some points. As a tribute to the old Plantation Overproof, the Plantation O.F.T.D. here works together with the Plantation Vintage Edition Trinidad 2003, which I recently featured here on the blog. My variant of the Caribbean Punch also comes with Orgeat, fresh pomegranate juice and Mate-Lemonade (Club Mate or similar). Cheers! 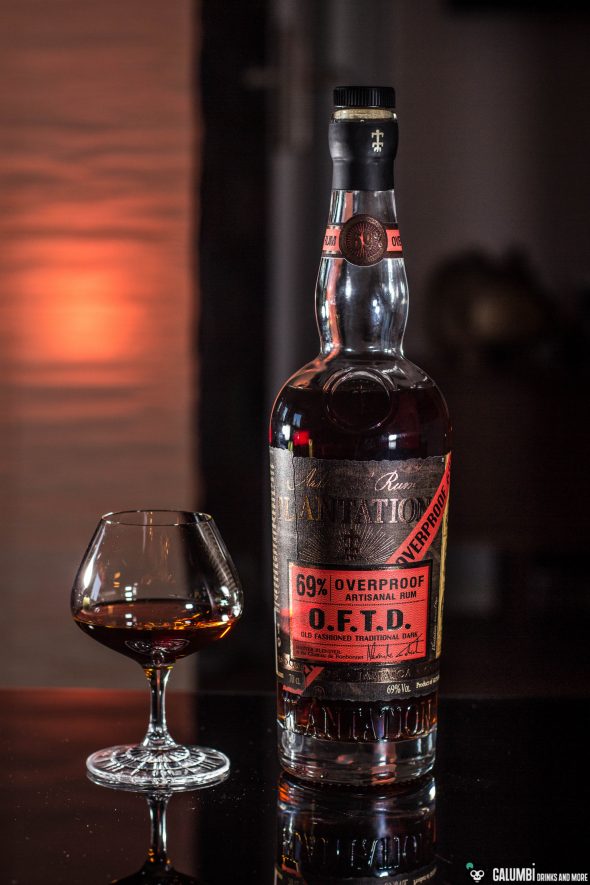 Aroma: Intensive, full-bodied and aromatic, that’s the character of the Plantation O.F.T.D. Overproof on the nose. A typical, strong rum aroma shows tones of dried fruits, plums, chocolate and coffee. After some time actually warmer citrus tones of oranges come through. A little added water emphasizes the citrus tones and brings them a little more into the foreground, but also here the rum remains full-aromatic and does not lose intensity. Really remarkable!

Taste: Intensively; the alcohol can of course not completely hide at this drinking strength but for 69% ABV it is surprisingly gentle – I am almost inclined to say: dangerously gentle. Again there are dry fruits, oak tones, vanilla and caramel, spices and some chocolate. After the addition of water, oak tones and dried fruits step a little bit into the background in favor of vanilla and caramel. 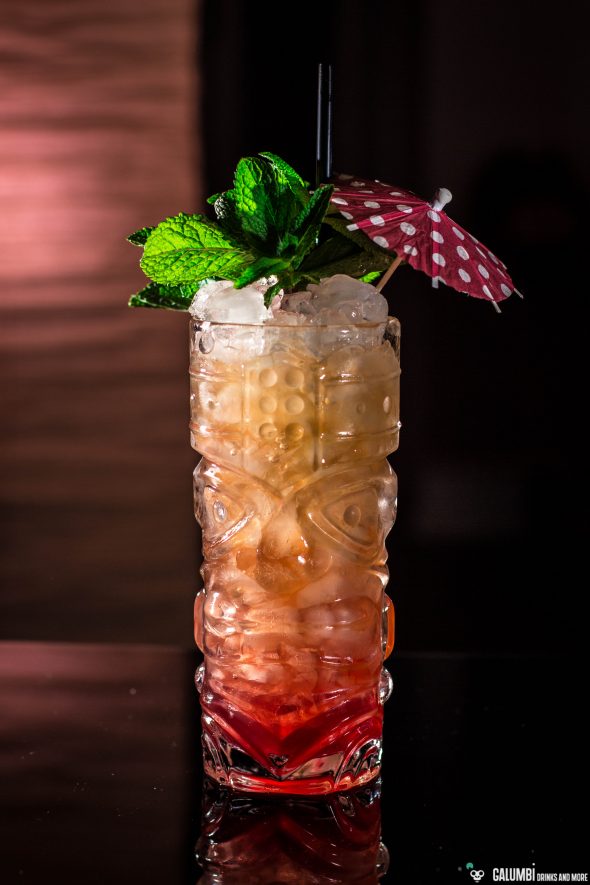 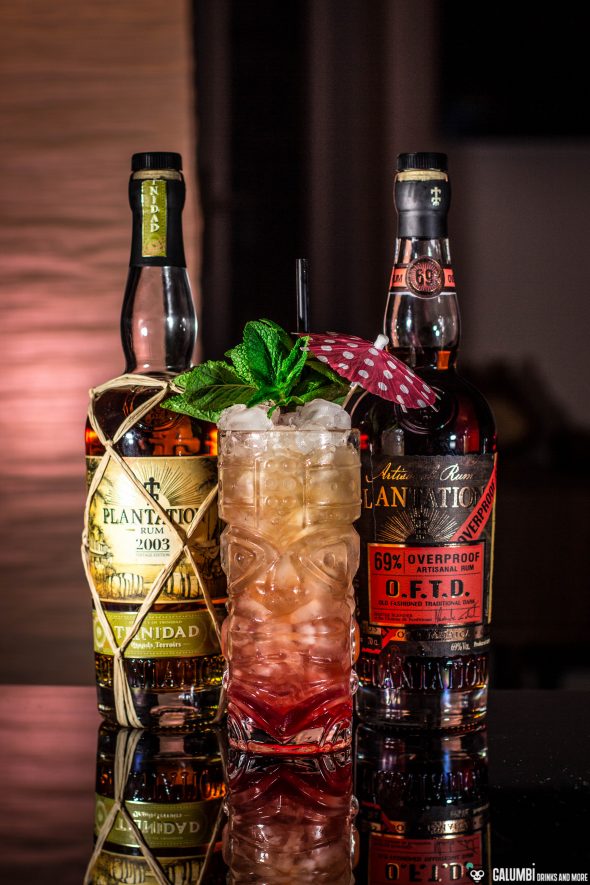 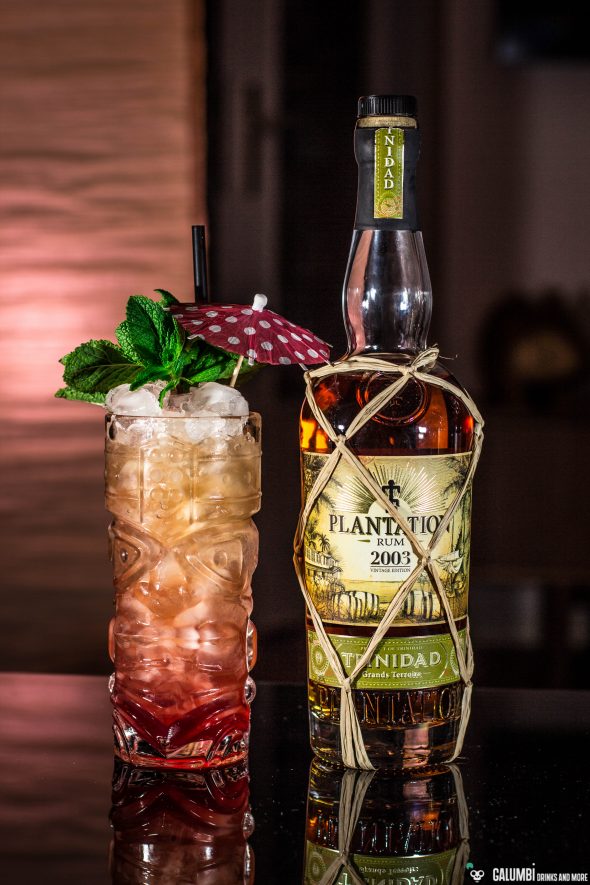 Preparation: Shake all ingredients except for pomegranate juice in your shaker on ice (caution when opening, the Mate lemonade will froth things up!) and strain into a Tiki-Mug filled with crushed ice. Finally, pour fresh pomegranate juice on top of the drink so that it trickles slowly downwards and gives a nice color accent. 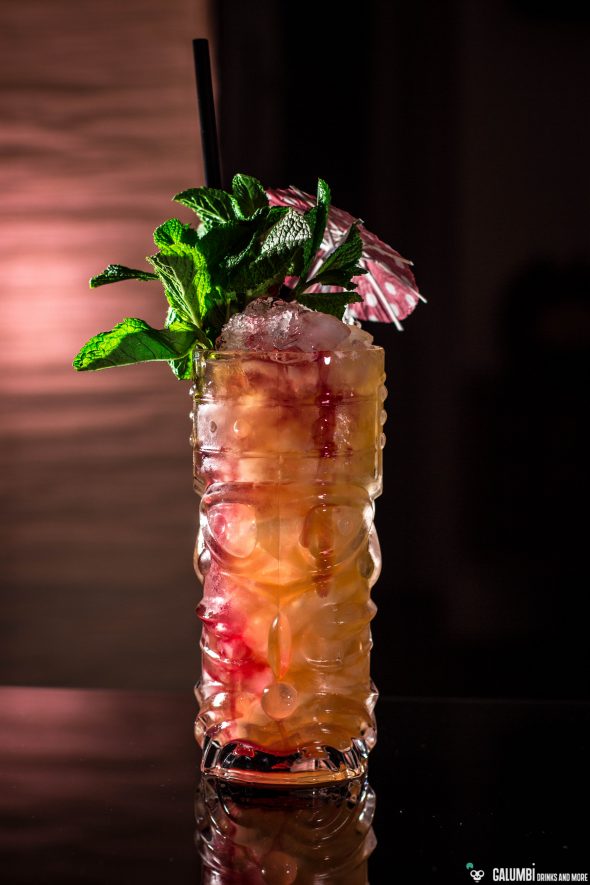 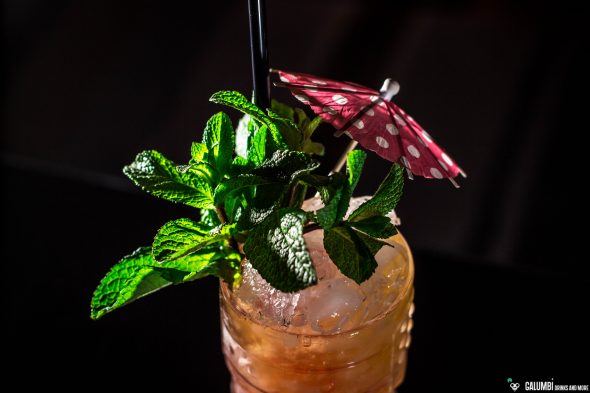