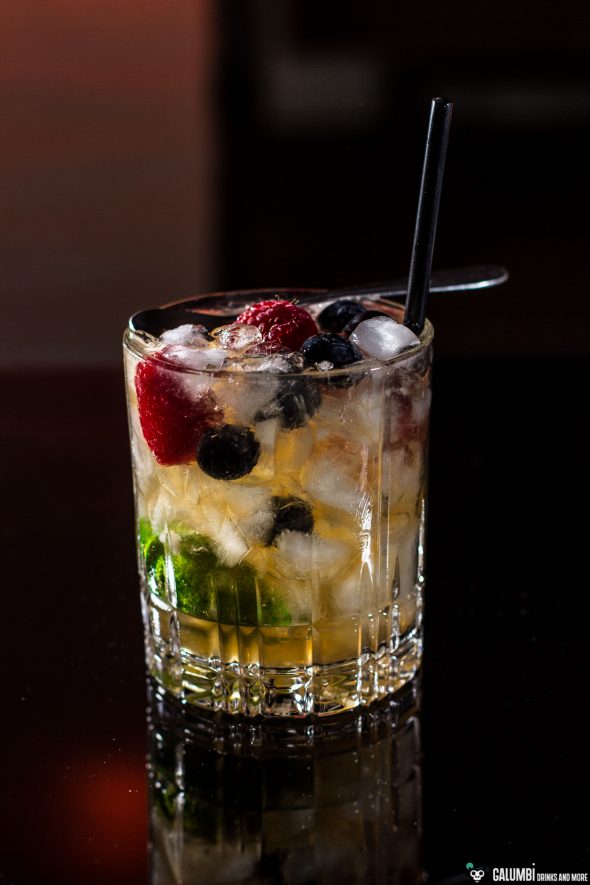 In a sense, today’s rum was already subject to one of the articles here one the blog in the past. However, that did not happen directly. Anyone who will perhaps remember my article on the Plantation Pineapple Stiggins’ Fancy Original Dark might have noticed the word “Original Dark” in connection with the brand name Plantation. And at least the Plantation O.F.T.D. Overproof Rum looks quite similar, doesn’t it? (provided test product) 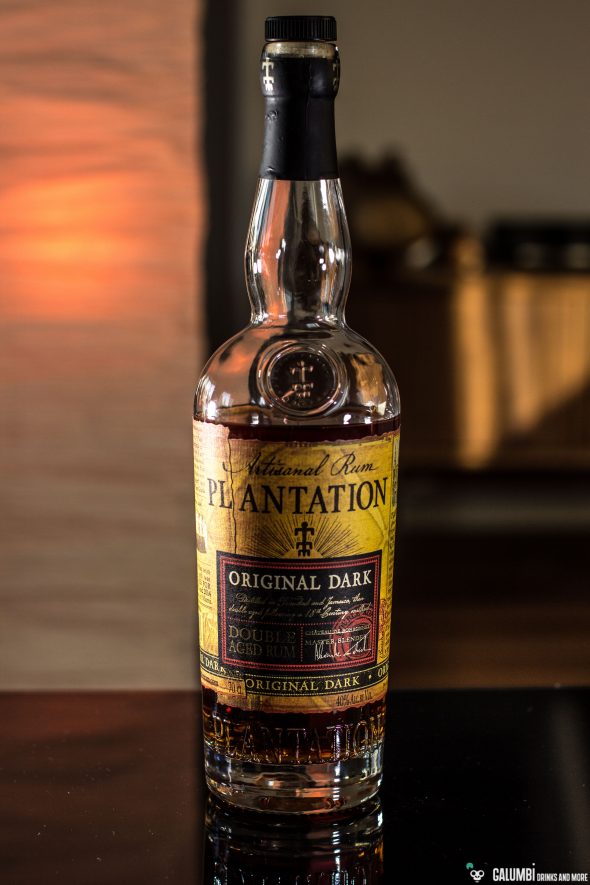 Ok, all of the mentioned rums are dark rums – so it seems quite obvious what they have in common! But when it comes to rum, color is not a reliable thing because the addition of artificial coloring is very common and not legally prohibited. At this point, however, I would like to point out that Plantation does not use any coloring agents to alter their rums, so that in all three cases the color actually comes from the cask maturation (what makes these rums similar indeed). But in comparison to the O.F.T.D. Overproof Rum there is not much more in common since the Overproof rum offers a much higher ABV (today’s Original Dark comes with “only” 40% ABV) and consists of rums from Jamaica, Barbados and Guyana. Today’s Plantation Original Dark on the other hand also contains some Jamaican rums but in combination with a blend of Trinidad rums. In fact it cannot be ruled out that the Jamaican rums are similar or even from the same casks than the ones used for the overproof version. But that’s the point where the similarities finally end.

The Plantation Pineapple Stiggins’ Fancy Original Dark is closer related to today’s rum. The reason is quite simple: it’s a rum flavored with pineapple barks and it is produced on the basis of exactly this Plantation Original Dark. But let’s take a closer look on today’s rum in detail and stop comparing. The rums from Trinidad were distilled on Column Stills, supposedly representing the milder and more flowery part of this blend, while the Jamaica rums (which are famous for their high ester content) are responsible for the more powerful and fruity notes in the Plantation Original Dark. Both rums were allowed to mature in former bourbon casks for three years prior to the blending. After being blended, they are once again filled into casks for a few weeks – this final maturation step takes place in France at the Chateau de Bonbonnet where Ferrand’s cellar master uses cognac casks. This is a practice for which many of the Plantation Rums are famous (and I think they really do benefit from that). 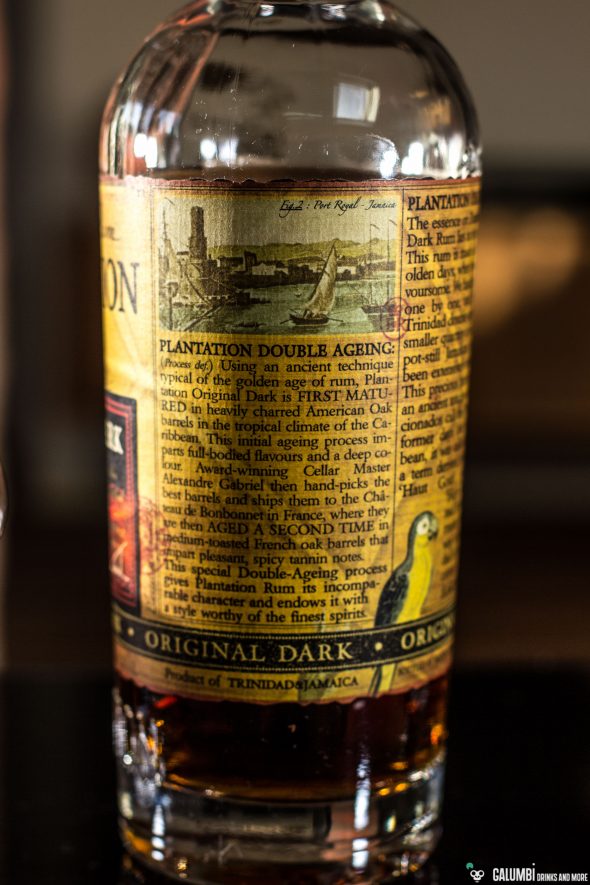 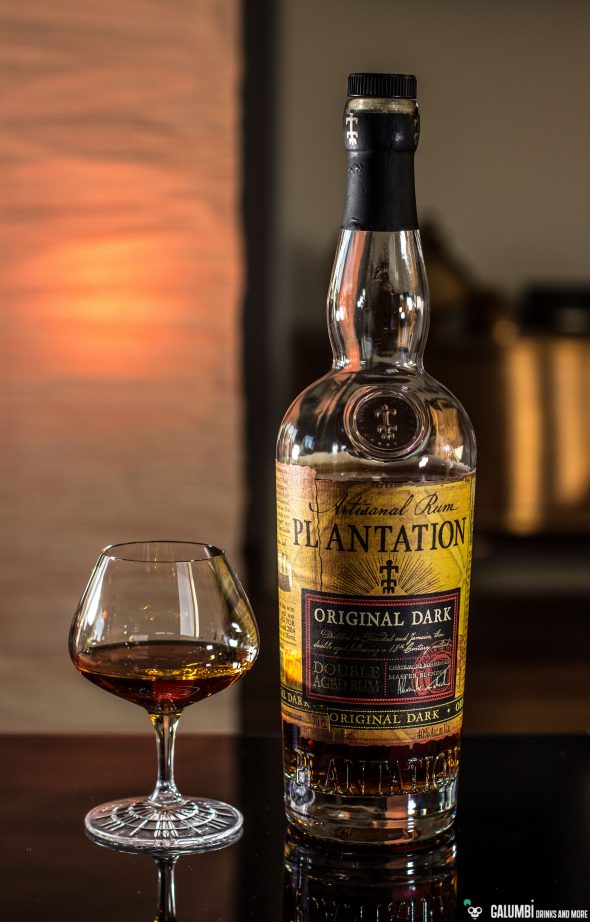 (As also stated in previous articles, Plantation concedes quite openly that a small portion of sugar is added to most of their rums – they compare this practice with the traditional “Dosage” we know from the champagne production.)

Aroma: It is obvious that I’m having a more powerful and voluminous rum in my glass. Full tones of rum with brown sugar, raisins, pineapples, a little banana and coconut show up on the nose. Nevertheless, the Trinidad rums mitigates the overall picture a little bit but without “flattening” it. Instead, there are also some floral, harmonious notes in the Plantation Original Dark. Spices like cinnamon, clove and some nutmeg are also recognizable.

Taste: surprisingly soft with notes of vanilla, pineapple, brown sugar and subtle associations of smoke. It does not taste like one of those much criticized “sweet rums”. Again there is some cinnamon, cloves and also a spicy hint from the casks. A nice and solid dark rum. 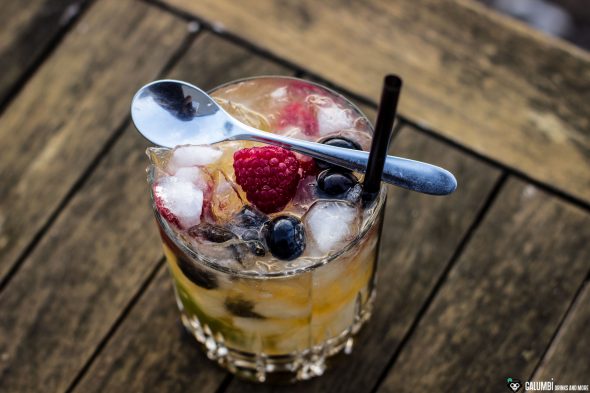 Thanks to the really good quality of this product and the more than fair price of around 15 euros it is very recommendable for the use in cocktails. So today I opted for a classic rum cocktail, which I personally like very much and which I think of as quite outstanding: the Knickerbocker. If you take a look at the list of ingredients of this cocktail, you might wonder about this allegedly strange composition of dark rum, raspberry syrup, orange curacao and so maybe you won’t really expect it to be a classic cocktail. But it is! (By the way it is the first cocktail in recorded history that calls for adding the squeezed out halve of a lime into the serving glass). The drink was first described by “Professor” Jerry Thomas in his “Bartenders’ Guide or How to Mix Drinks”. I’ve changed it a little, though, and was mainly influenced by David Wondrich’s version. The original recipe calls for Santa Cruz Rum (today you would probably use a golden Cruzan Rum, because it comes from St. Croix of the Virgin Islands), I am nonetheless “darkening” the drink to some extent by using the Plantation Original Dark something. In addition to that, I am replacing parts of the raspberry syrup by Chambord, which simply works great in this drink. And instead of Curacao, I am using the Créole Shrubb from Clément, which also fits in fantastically, thus making it a more “French” Knickerbocker cocktail. 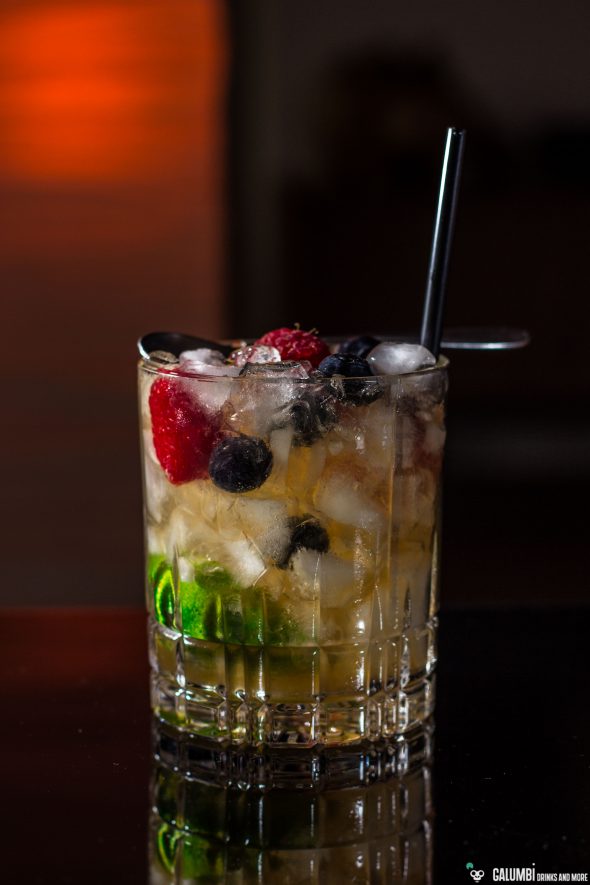 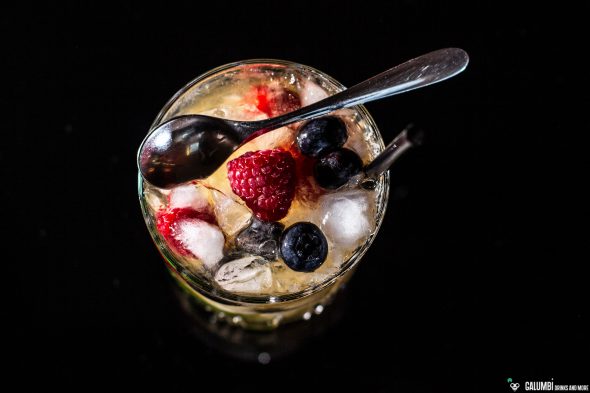 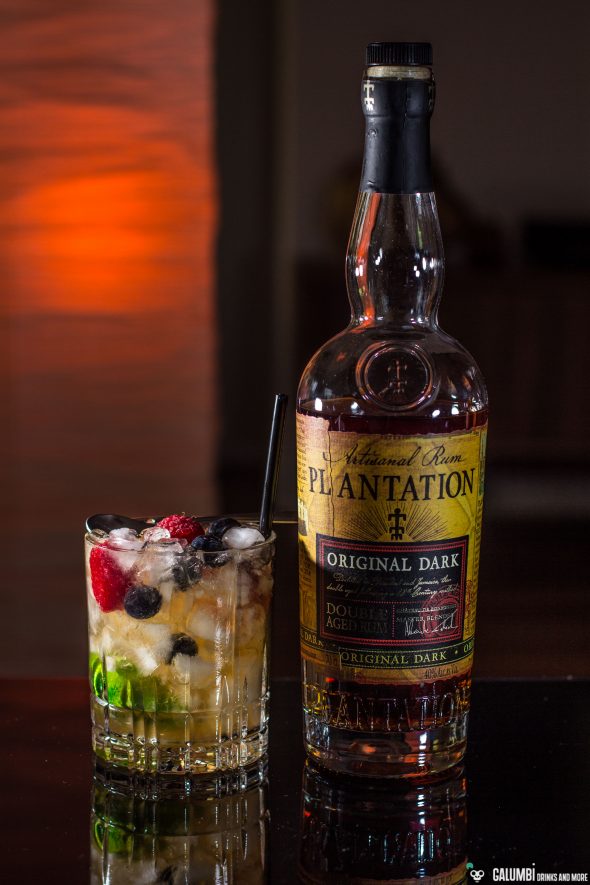 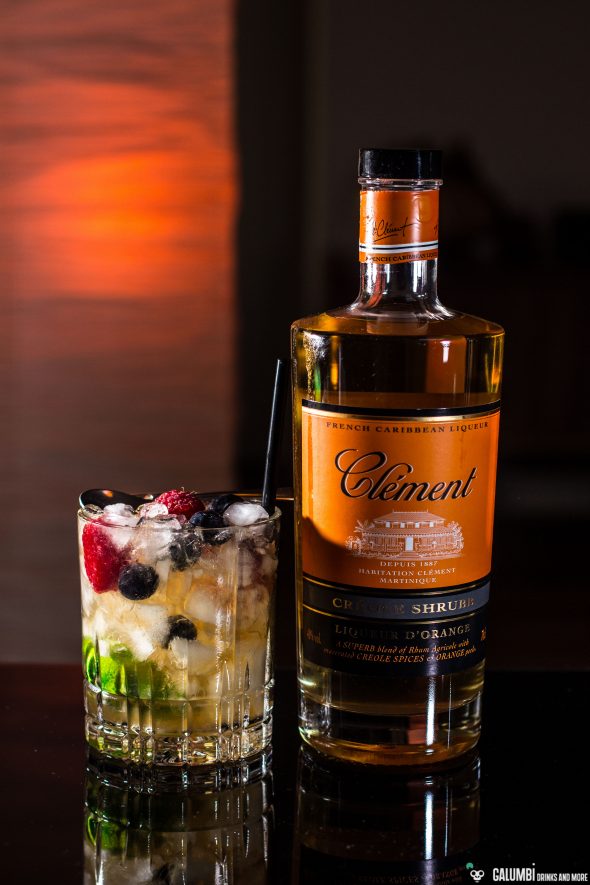 Preparation: Squeeze the juice of the lime halve into a shaker, add the remaining ingredients and vigorously shake with cracked ice. Place the squeezed-out lime halve in your pre-cooled glass and also pour the complete content of the shaker (without straining) into the glass. Garnish with fresh berries.

Garnish: a few fresh berries (raspberries, blackberries and / or blueberries) and a small spoon 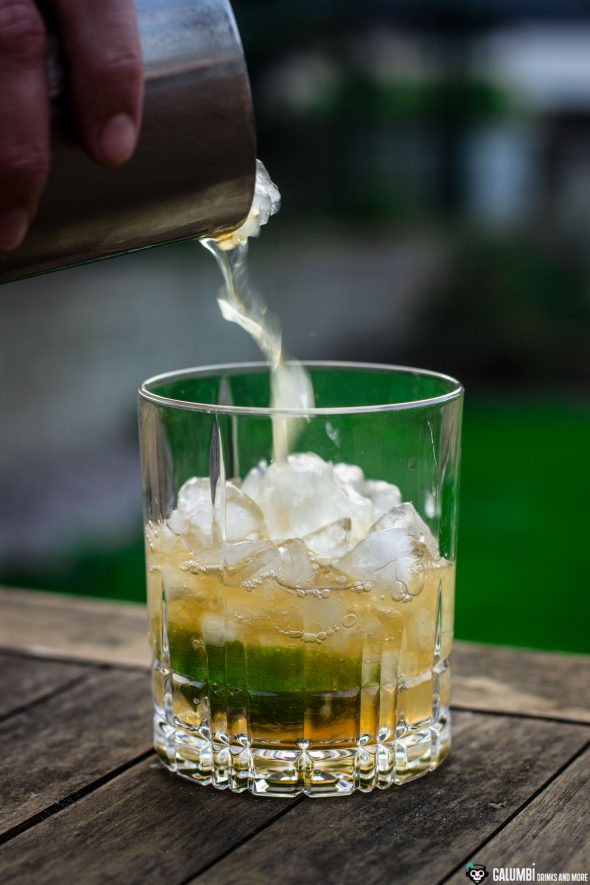 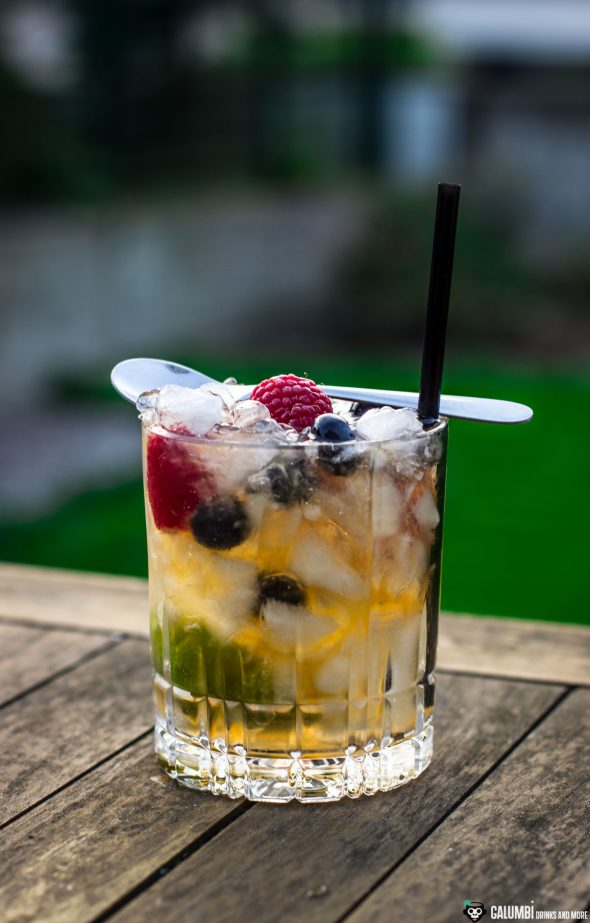 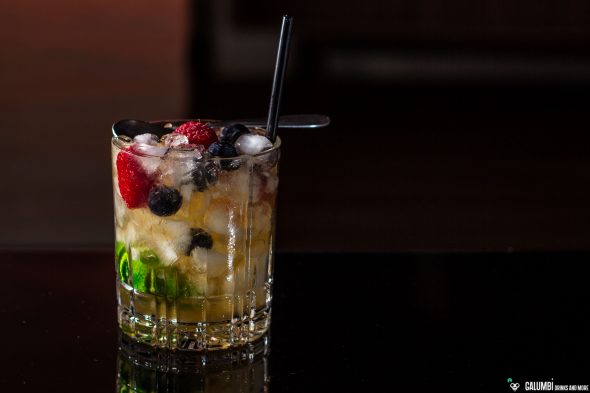