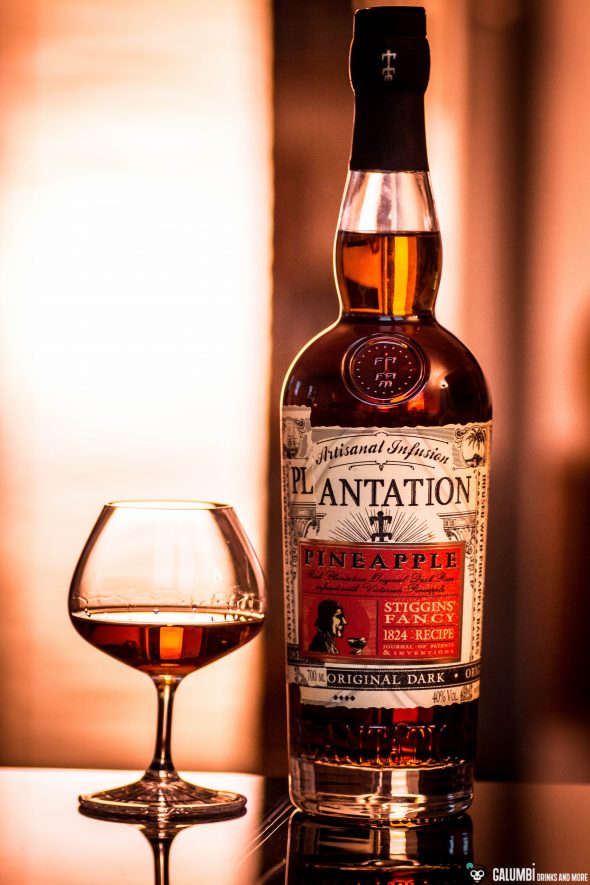 Pineapple and rum – this combination is surely familiar to almost everyone who has ever been to a Tiki bar and the whole Tiki segment would be unimaginable without it. But while the two are usually married inside of a cocktail shaker, here and there you can also encounter aromatised rums which already come with a pineapple flavor. Unfortunately those flavors are very often artificial. However, the Plantation Pineapple Stiggins’ Fancy Original Dark proves that it does not have to be that way.

Behind the long description hides a relatively new product of the French spirits and cognac producer Ferrand (I have also written a few lines about the Plantation XO 20th Anniversary Barbados Rum in the past) which however can look back on a quite historical background. A lot of information about this background is extensively explained on the attractively designed bottle. To be honest I can remember only very few bottles that have had such an amount of text on their label. Well, it may not be everyone’s thing to read lots of letters before or after pouring your rum in a small glass, but I felt immediately in my element. 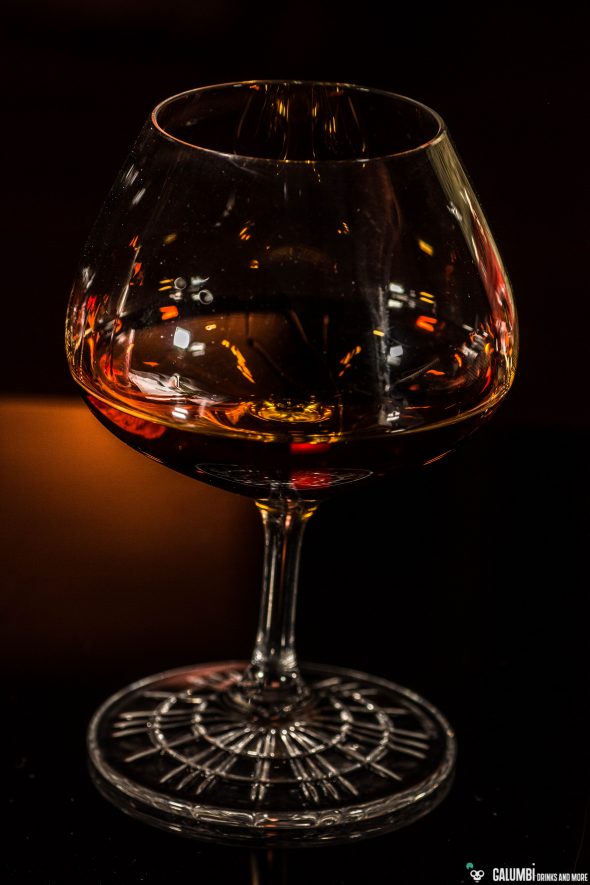 So there is indeed something to learn from the label: in Charles Dickens’ 1836 novel The Pickwick Papers, the figure of Rev. Stiggins likes to have a “Pineapple Rum” (with one shot of hot water and some sugar). So it seems like this way of drinking rum was not uncommon in the England of the nineteenth century. In addition to this literary source, the house of Ferrand – together with the famous cocktail historian and Bartender David Wondrich – also did some research on the basis of some other written tradition. In this context, the English Journal of Patent and Inventions from 1824 and the Journal of Agricultural Society from 1844 are also mentioned. The first source of the two also clearly shows that it was customary in the British Caribbean colonies to serve “Pineapple Rum” to visiting friends from Europe during their stay. So it becomes clear: Some research and reflection was made before this product saw the light of day.

With this short summary we have already clarified why this bottle bears the name Plantation Pineapple Stiggins’ Fancy. Of course, there are still plenty of questions about the content of the bottle. Here I would also like to shed a little light on the matter and briefly describe what exactly is inside of each bottle. Therefore we first have to take a look on the question of how the pineapple aroma comes into the bottle: Ferrand uses Queen Victoria pineapple fruits, which according to the information on the label represent the world’s best pineapple variety. The label also informs us that in 1668 they were first grown on the French Reunion Island. The barks of this Queen Victoria pineapple are now macerated in white Plantation 3 Stars Rum. At the same time, the flesh of fruit is macerated in Plantation Original Dark Rum for 3 months and finally both are blended together. Thus, the meaning of the addition “Original Dark” in the name Plantation Pineapple Stiggins’ Fancy Original Dark makes sense now. The finished rum is bottled at 40 % ABV. 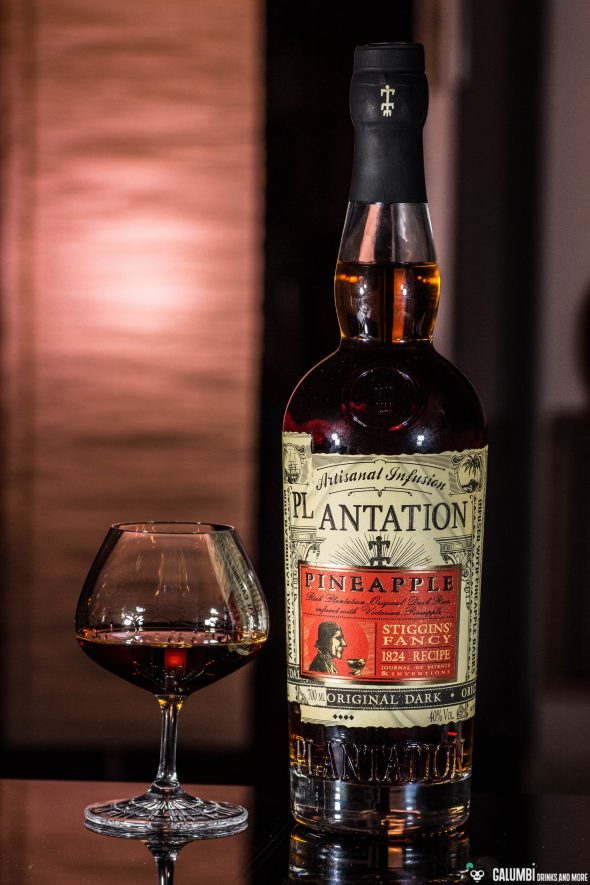 Of course, such a fascinating rum is also very interesting as an ingredient for cocktails. This does not necessarily have to be restricted to the tiki segment, even if it does not need much fantasy to see a lot of opportunities there. With the Cofresí cocktail – a drink I will present here in the next days – I will nonetheless introduce a non-tiki recipe that is made with the Plantation Pineapple Stiggins’ Fancy Original Dark. But today it’s all about the rum itself. 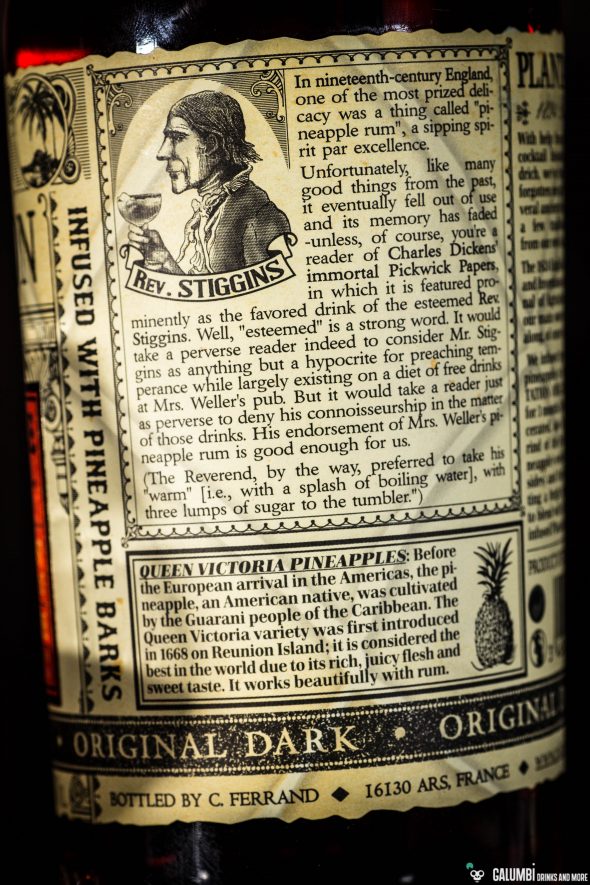 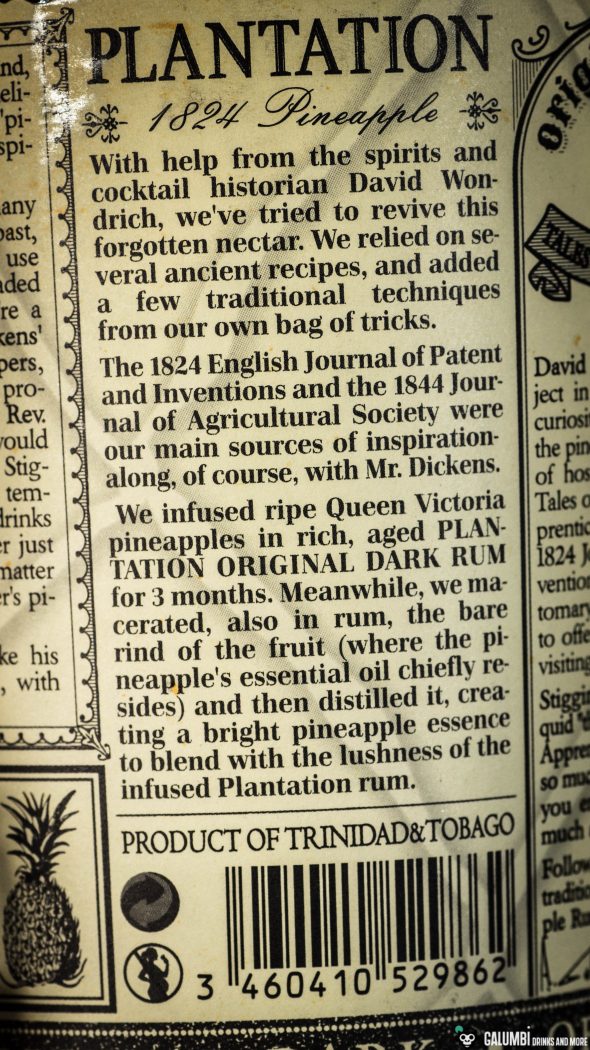 Aroma: Two aspects are immediately noticeable: an aromatic and full sweetness from the rum and a very nice pineapple aroma. I must emphasize that the pineapple aroma actually smells like freshly cut pineapple: a sweetish freshness is accompanied by subtle woody notes from the bark, which you would never find that way in artificially aromatized rums. There is also caramelized brown sugar, a hint of coconut and some vanilla.

Taste: On the palate the Plantation Pineapple Stiggins’ Fancy Original Dark is intensely aromatic and sweet with overripe pineapple, a little cherry and fine but noticeable spicy flavors from the barrels. Really a great taste experience that makes you want more!

Finish: the finish is full-bodied and slightly drier, while the sweet notes are especially underlined by the woody notes of the rum.