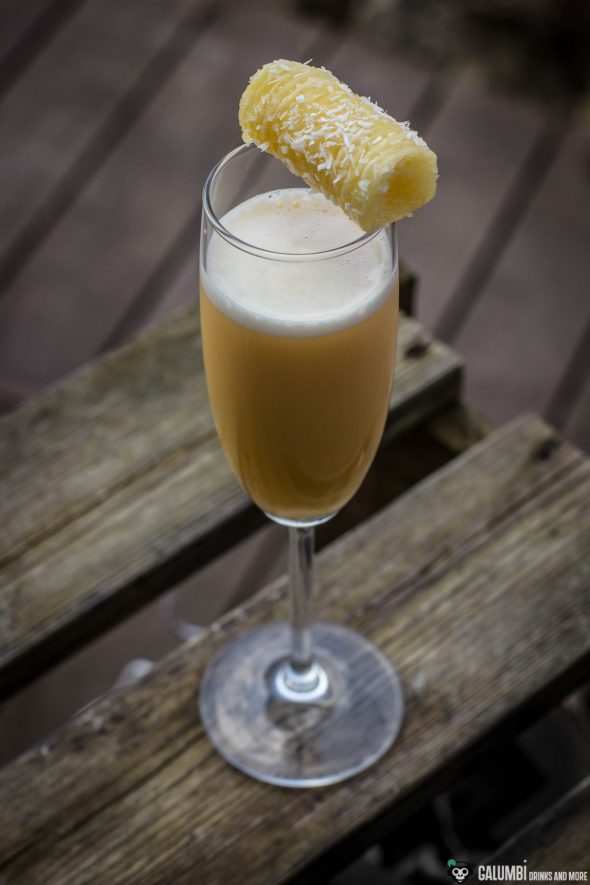 Long ago – back then this blog was still very young – I wrote about a rum infused with pineapple and thus introduced the category of flavoured rums as a topic here early on. Since then, some spiced rums have been reviewed, various Falernums (or Falerna, whatever) and some sweet rums, where one may well argue about the extent to which they are not actually spiced or flavoured rums as well. What I have not yet discussed here, however, is a flavoured rum specifically flavoured with coconut. And that’s exactly what I’d like to finally do. (provided test product)*

And of course it’s a good thing that the Aluna Coconut Rum is just such a rum in front of me today. However, it is not just any Coconut Rum, but one that has started with the self-image to make many things better that other Coconut Rums have not done so well. And indeed: even if I haven’t presented any separate brands here so far, there are a many coconut rums, liqueurs and spirits out there, most of which are – let’s put it nicely – sticky sweet. Accordingly, they rarely play a role here, because although I personally like to drink coconut water and am generally very fond of coconut flavour, I’m usually just happy with coconut water to use it in cocktails – mostly in tiki drinks. 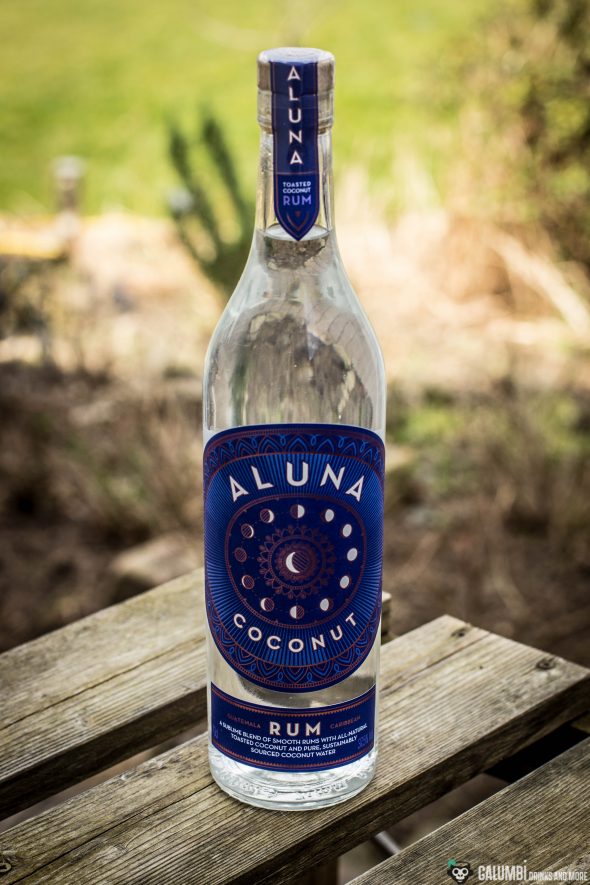 The Aluna Coconut Rum consists of a blend of Guatemalan rums fermented with pineapple yeast (I have no idea to what extent that gives a discernible effect, or not) and two other “Caribbean” rums (which is not really a small area of origin). The coconut flavor gets into the rum through a coconut macerate made with roasted coconuts. Less sugar is supposed to play a role in this rum (about 25g/l, and indeed I’ve had “rums” that contained significantly more but wanted to be “real rums”), which I think is basically a good decision. Finally, the rum is brought down to drinking strength not with water, but with coconut water. A nice idea, the taste effects of which I am very curious. Thus, the Aluna Coconut Rum finally reaches the bottle with 37.5% vol. So it becomes apparent that the focus here is on mildness, smoothness and a soft mouth-feel, and you’d probably be better off getting a white Caribbean sun hat and a white coconut cookie within reach.

Aroma: Did I just say coconut cookie? Indeed, the aroma of the Aluna takes me in that direction. But wait, before you think I’m describing the artificial aroma of a candy freshly ripped from its plastic wrapper, let me say right off the bat: it’s actually a very authentic coconut scent with summery associations that rises up here. A little vanilla resonates and indeed also some cake batter, but it remains ostensibly the coconut that sets the agenda here.

Taste: coconut, oh yes, and really a very pleasing one, not too sweet (even if sweetness is clearly involved here). The coconut water effect is definitely fulfilled, but we are still recognizably dealing with a spirit that also has notes of vanilla, coconut blossom sugar, some ripe banana and a diffuse citrus note. I quite like it, even if it is probably primarily a spirit for use in cocktails.

Finish: in fact, slightly woody sugar cane notes appear here, as found in some unaged rums. The finish is rather short.

Well, of course, with a coconut rum the thoughts immediately jump in the direction of a pina colada, of tiki drinks, daiquiris or other summer and vacation drinks. And I am also sure that the Aluna cuts a good figure in such cocktails and I will certainly try it out one day. For this article, however, I opted for a somewhat less common way of using it, namely a flip. Unfortunately, you don’t see flips very often, which is probably due to many people’s skepticism about fresh eggs in drinks. In the end, it’s probably also somehow irrational that a flip in particular is seen as even more borderline compared to sours foamed with egg white, because there is a “whole” egg in it. But again: statistically, every car trip taken is many times more dangerous than consuming a cocktail with fresh egg. Be that as it may, in my Paradise Flip (after all, you want to be carried away to paradisiacal beaches by coconut rum) I combined Aluna Coconut Rum with Joerg Meyer’s Dutch Cacao Creme de Cacao White, a little Galliano (L’Autentico! Don’t take the vanilla version!) and a Dash of Chocolate Bitters. The result is a creamy, delicate and coconut-toned drink with subtle spicy depth and a hint of cocoa. Really works like being in paradise. 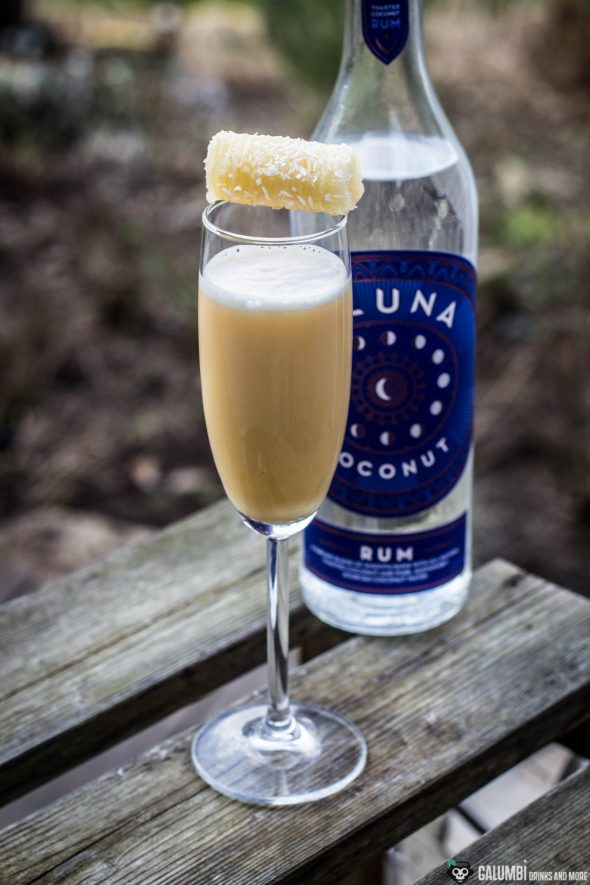 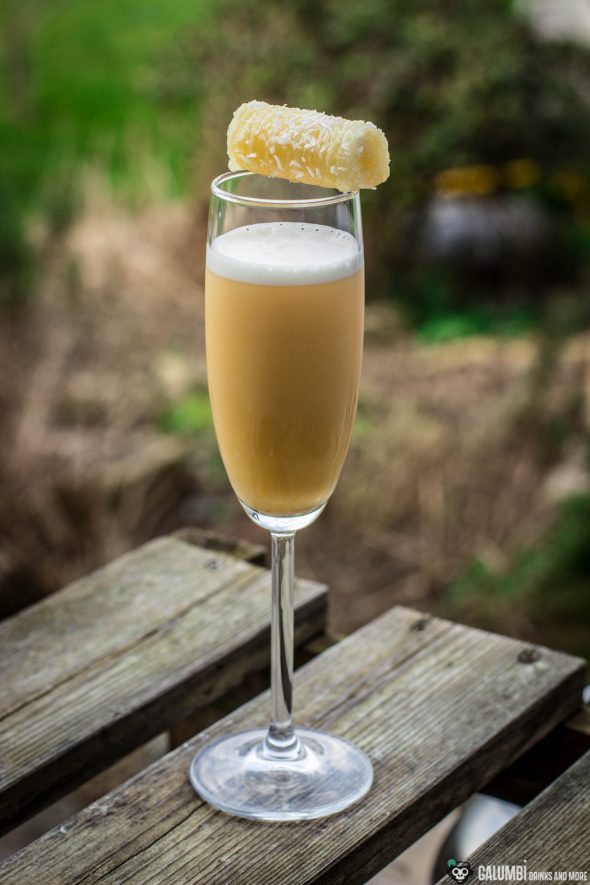 Preparation: Pour all ingredients into a shaker and first whip with a milk frothing stick until frothy. Then add ice and shake vigorously for at least 20 seconds! Double strain into a pre-chilled glass.

Garnish: a piece of coconut baklava (alternatively, another coconut pastry or cookie will work). 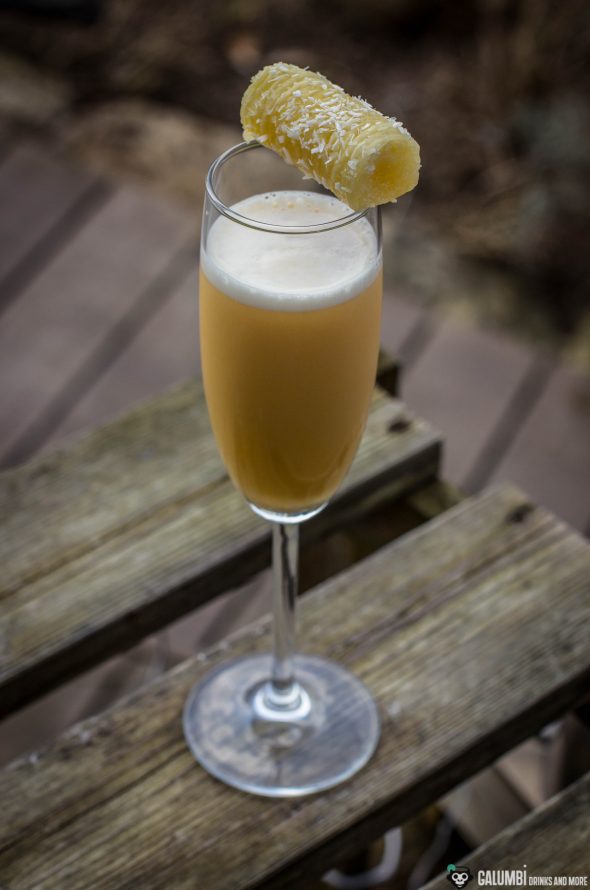