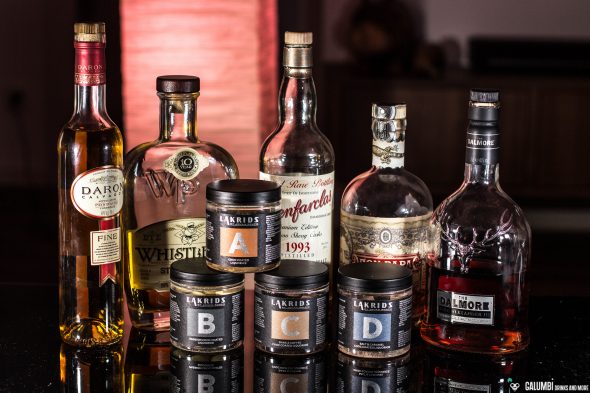 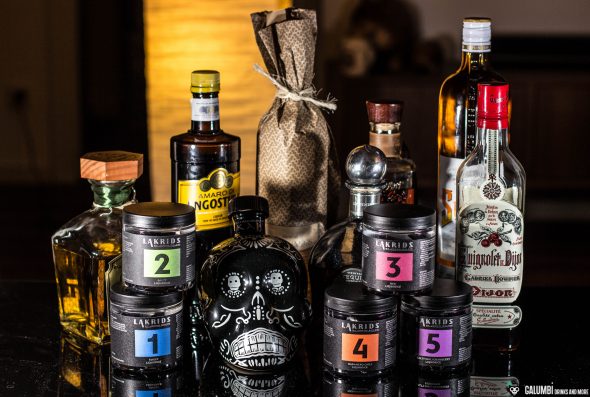 So after a few days of having the flu I finally would like to present an article to you that deals with a very special topic: liquorice. But of course it is not just about liquorice, but liquorice (or “Lakrids”) in combination with spirits. This is an idea that I first had to get used to but turned out to be of such an aromatic substance that I could not withstand its seductive nature. The “Lakrids” I am using here comes from the young Danish entrepreneur Johan Bülow from the isle of Bornholm, where he originally opened a liquorice store in the town of Svaneke.

After initial start-up difficulties, Johan Bülow finally developed a recipe that satisfied him and his partner and the rapid success story of a young company took its course. (If you would like to read about the entire history of the company, you can find the corresponding information here.) But Johan Bülow does not only produce high-quality liquorice but also reflects the various classical varieties of liquorice which have developed around the world in his product range. In addition to that, new and innovative varieties have been developed which often create a really very charming treat when combined with chocolate. I have to admit that I have always been a lover liquorice (and I also knew about the great love of the Scandinavians for the “black gold” – I even once had liquorice ice cream in Iceland, it was fantastic!) and so the Lakrids product range was fundamentally attractive to me. I first came upon the brand during a trip to Norway in 2014 where I saw it in the transit area of the Copenhagen Airport and was really stunned by its quality. But it took another two years before I came up with the idea of ​​tasting it together with spirits.

The reason for this idea was a tasting event in the wine and spirits store “Stendels” in Dortmund (I did write about Stendels in connection with the Bodos & Lonis Dortmund Dry Gins). For this tasting event, some chosen varieties of Lakrids by Johan Bülow where paired with six different spirits. A friend of mine, who also participated in the tasting, was even more skeptical since he is not even a big friend of liquorice at all. But to my (and his much greater) surprise, both of us were completely convinced of this duet of Lakrids and spirits. The fact that spirits and chocolate can work well in combination is nothing new (and so I was not so skeptical about the chocolate coated versions of Lakrids) but I would never have expected such a harmoniously interlacing flavor experience with some of the offered spirits. The deliberate chewing and gentle melting of the small pieces of Lakrids unfolds a wonderful flavor when combined with a little sip of a quality spirit, thus allowing two beautiful things to merge synergistically.

I liked the whole thing so much that I decided to present some ideas on my own. These will differ in (almost) every case from the combinations I have tasted at Stendels. Not because I was not satisfied with the combinations presented there but because I simply wanted to try out new flavor harmonies. I really love the habit of deliberately enjoying a little treat alongside my spirits. So in the following, I will present some pairings of liquorice with liquors and spirits and briefly explain my thoughts behind them. 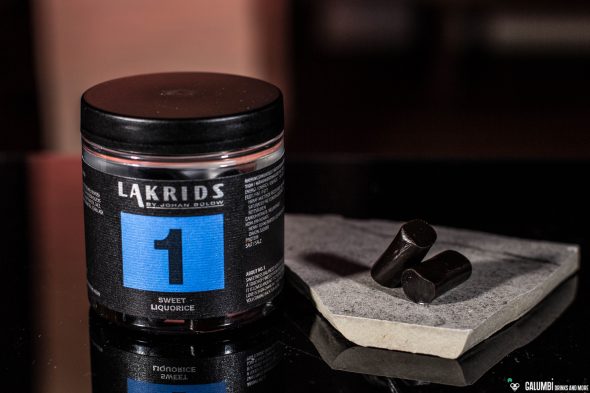 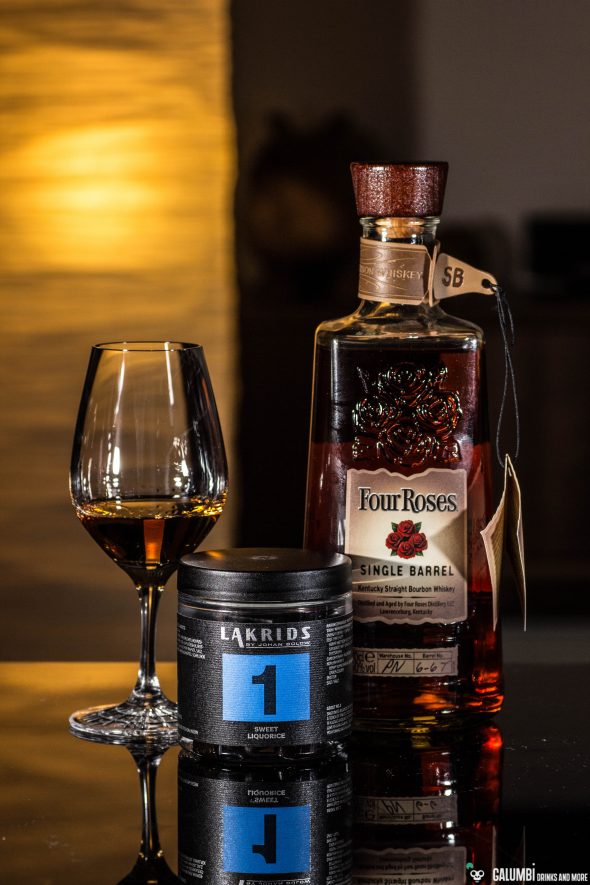 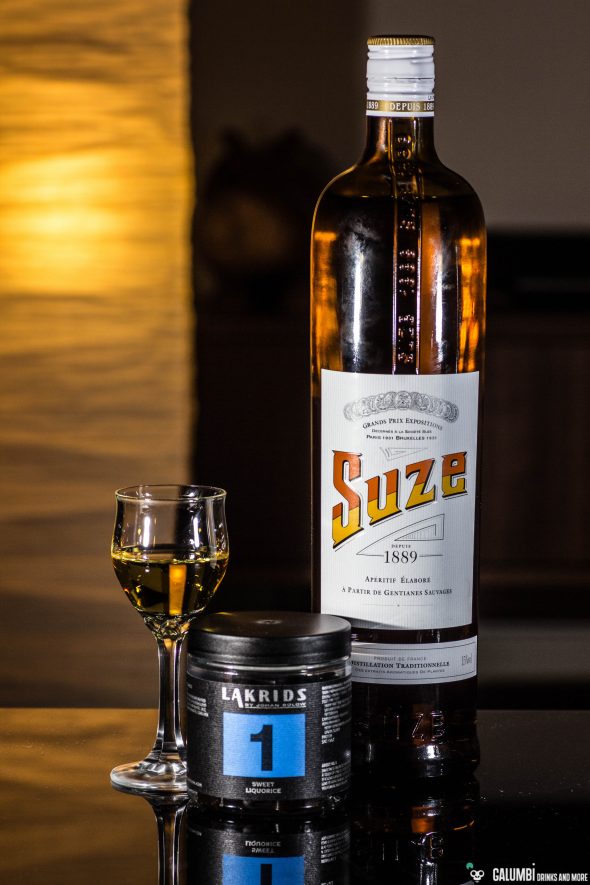 The Lakrids NO.1 certainly represents the classic liquorice within the product range of Lakrids. It offers a fine and sweet taste with a nice anise note and directly shows that we’re dealing with a higher-quality liquorice compared to most ordinary ones. As accompanying spirits I chose one flavor contrast (at least a basic contrast) and a more complementary one. The Four Roses Single Barrel Bourbon with its intense vanilla, honey and fine chocolate tones as well as its cedar wood matches the light and mild spiciness of liquorice that I would see more like accompaniment. With the Suze gentian liqueur, on the other hand, the sweet and spicy character of the liquorice is amazingly combined to create a new, mutually reinforcing and supporting taste experience: very nice and aromatic – so here you should try to have both liqueur and liquorice simultaneously! 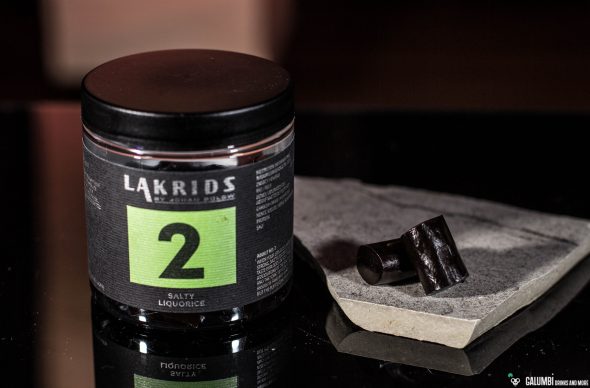 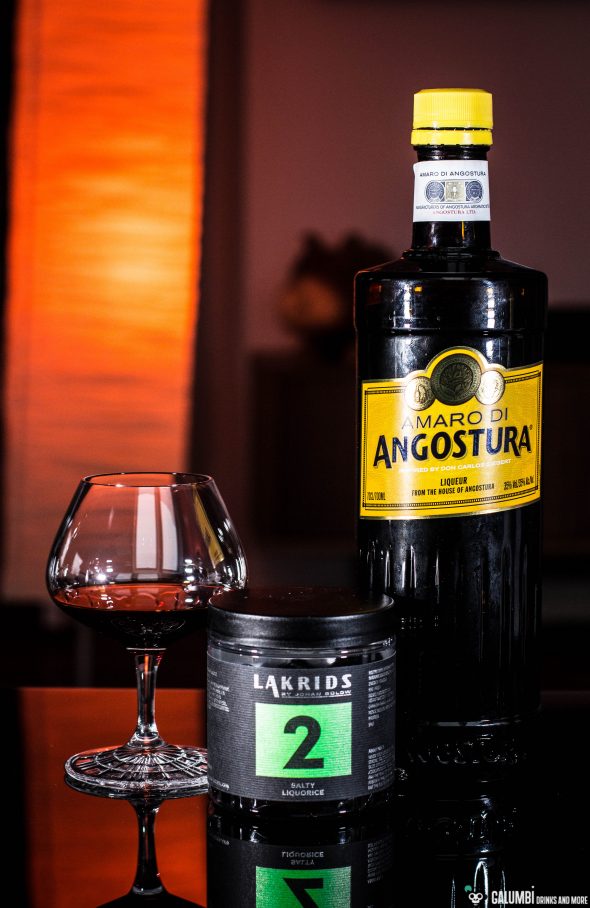 With the Lakrids NO.2, Johan Bülow takes the large fan base of salted liquorice into account, which can not only be found throughout Scandinavia, but also in the Netherlands and many other countries. The salt underlines the spicy aspects of the liquorice like hardly in any second variety. Therefore it was clear to me that I also wanted to raise a whole potpourri of spices as a flavor partner here. I therefore opted for an Amaro, the Amaro di Angostura (which I recently introduced here) to be precise. A spicy and intense liaison! 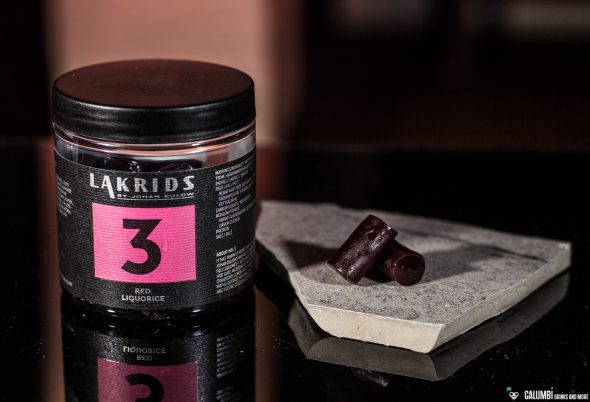 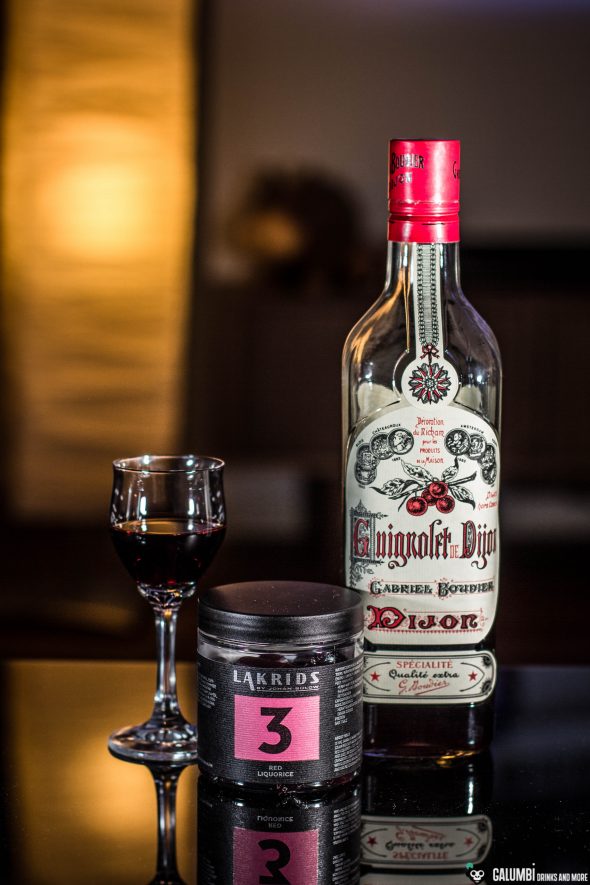 As a big friend of berries of all kinds, I like the Lakrids NO.3 particularly well. While I mainly associated sweet and sticky rubber laces with the “red licorice” I mainly knew from the US, Lakrids NO.3 shows how red liquorice can be done properly: full-bodied notes of strawberries, cranberries, currants… it tastes really great. A good quality cherry liqueur like the Guignolet de Dijon perfectly fits here, but also Eau de Vies and other berry liqueurs are very recommendable. 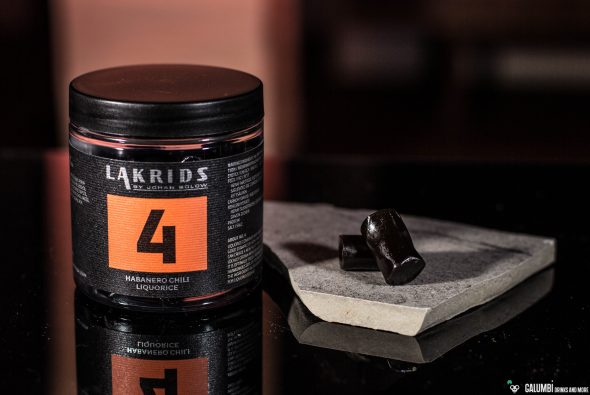 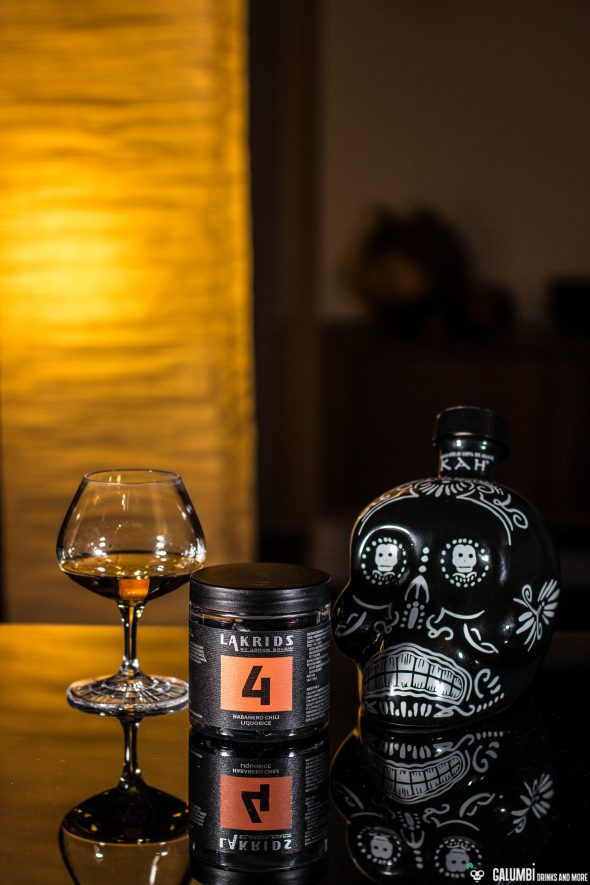 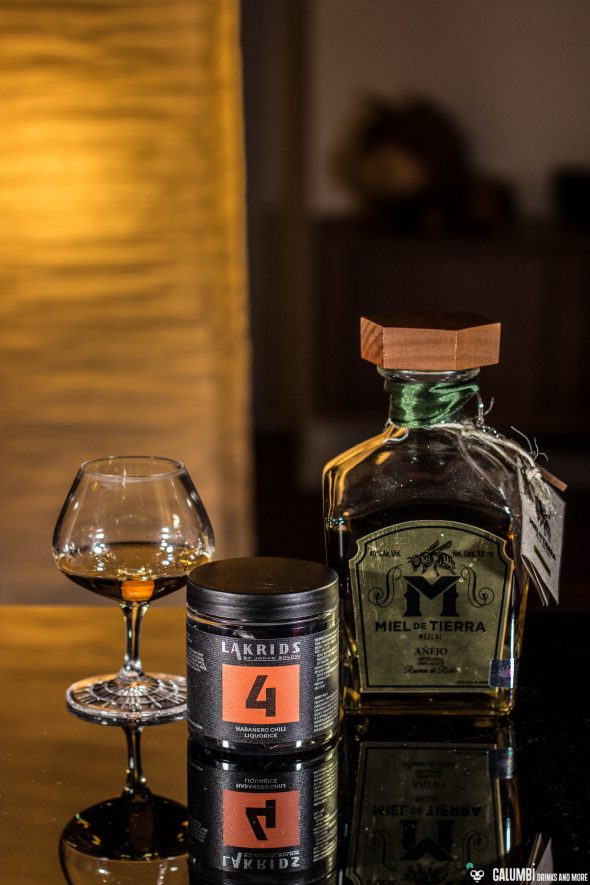 Here, too, I can tell you one of my personal preferences: I love everything that has to do with chilies. And the habaneros with their fruity and apricoty sharpness are one of my favorites. Combined with the spicy notes of the base liquorice, this variety harmonizes perfectly with the earthy and spicy tones of Mezcal. And here I decided to have a beautiful and specially made Tequila, the Kah Anejo. The soft sweetness of the barrel has made this tequila soft and mild, but it offers the perfect potential for a duet with Lakrids NO.4. It also works with the Miel de Tierra Anejo Mezcal, which – like a Tequila – is also made from a 100% blue agave and still offers a nice alternative in combination with Habanero liquorice. 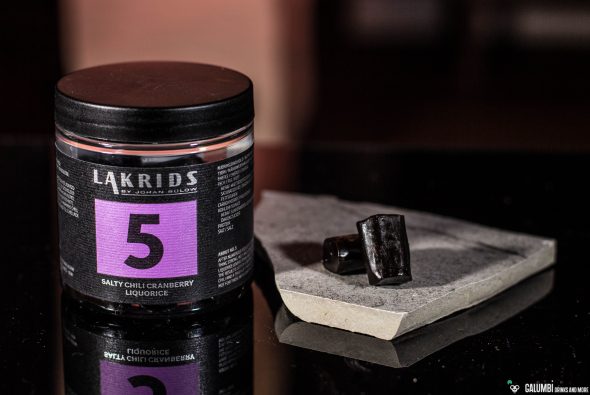 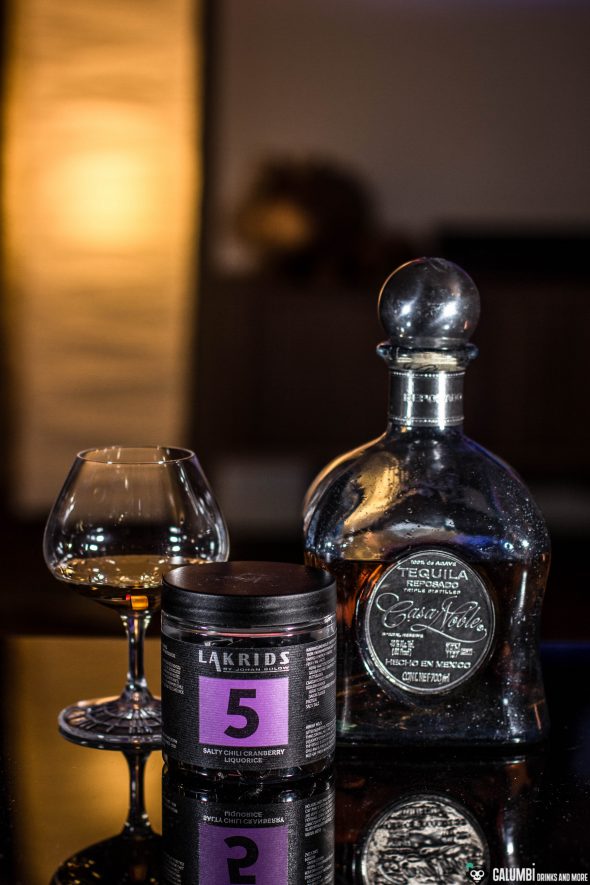 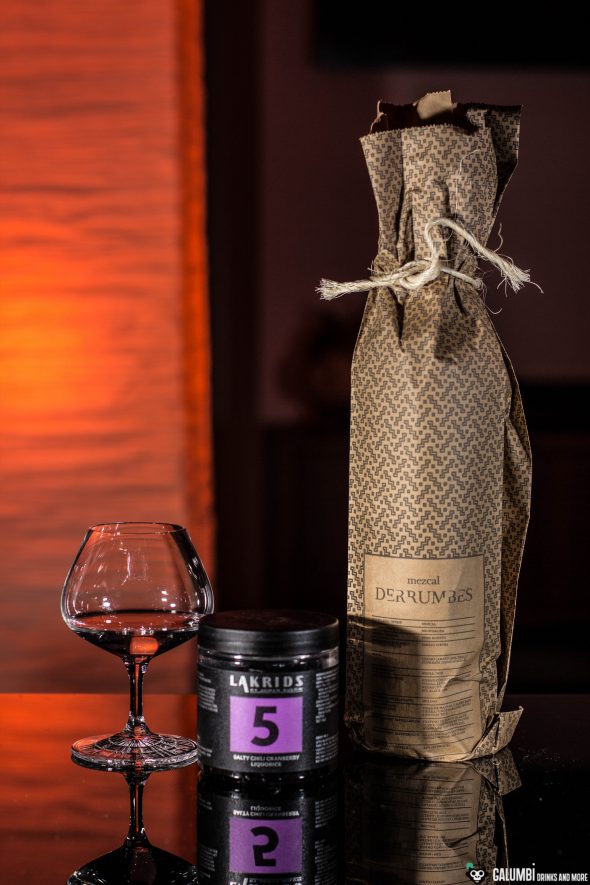 This Lakrids variety takes a similar line as the NO.4, but it is much stronger and more robust with a much higher content of liquorice and a more salty character. Here, too, Mexican agave spirits are an excellent accompaniment. However, this liquorice also tolerates the “wilder” and more robust varieties. On the one hand, with the Casa Noble Reposado I once again opted for a tequila, but this time for a reposado whose balance of earthy and peppery notes with a gentle vanilla from the barrel harmonizes nicely with the liquorice. On the other hand, the Lakrids NO.5, in combination with the Derrumbes Michoacan Mezcal, is an inspiration for all those who want to challenge their flavor buds and experience an explosion of smoke, spices, chilli and salt. I will also introduce this Mezcal separately in the coming weeks. 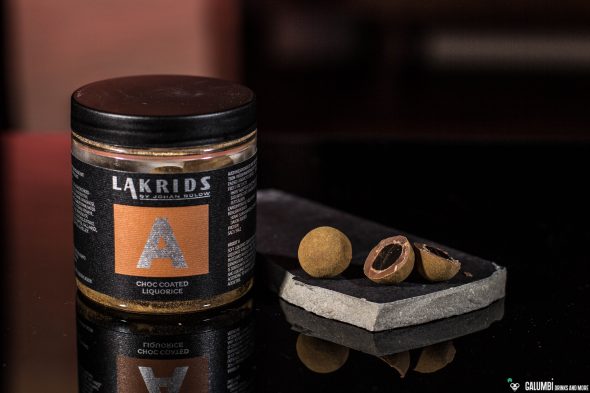 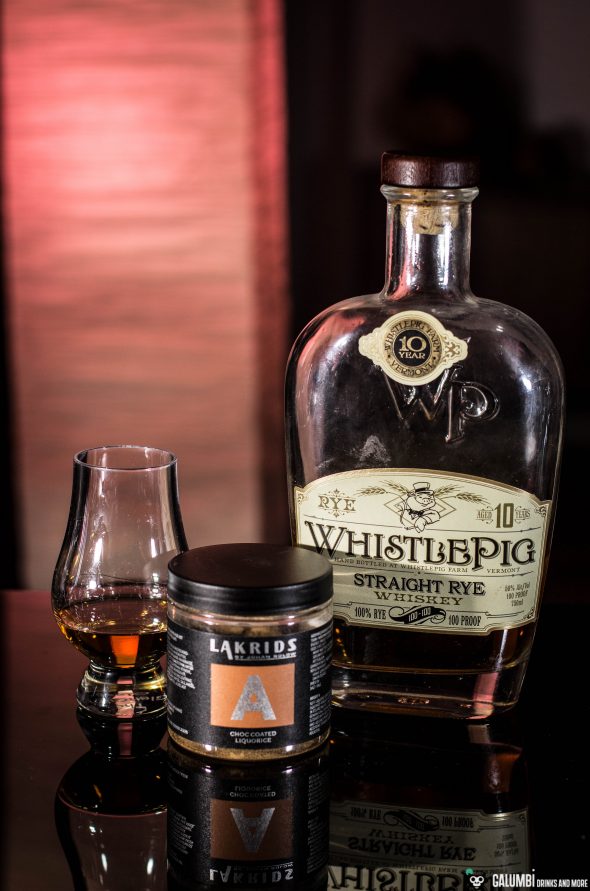 With the Lakrids varieties sorted according to letters, we are now entering the chocolate-coated area. In the case of Lakrids A, the liquorice is covered with Belgian chocolate, which was subsequently dusted with liquorice powder. According to the manufacturer, the idea of ​​this combination originally comes from Ireland, which also led me to choose a whiskey for this variety. However, my choice did not fell on an Irish whiskey – forgive me – instead I opted for a 100% straight rye whiskey from Vermont, the sensationally good Whistlepig. The Whistlepig, with its powerful sweetness and herbaceous notes with some liquorice itself catches the liquorice dust, which first comes into contact with your tongue and then masterfully dances with the sweet melting Belgian chocolate in your mouth. 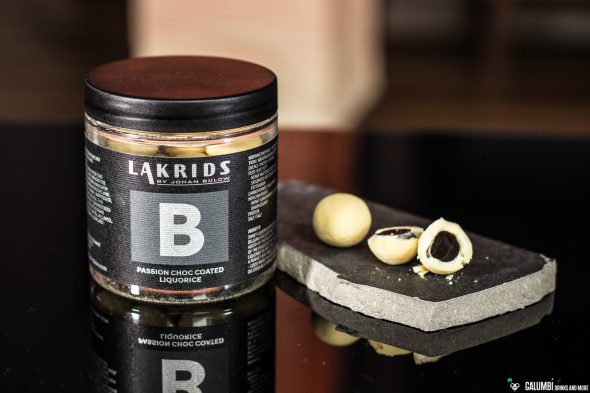 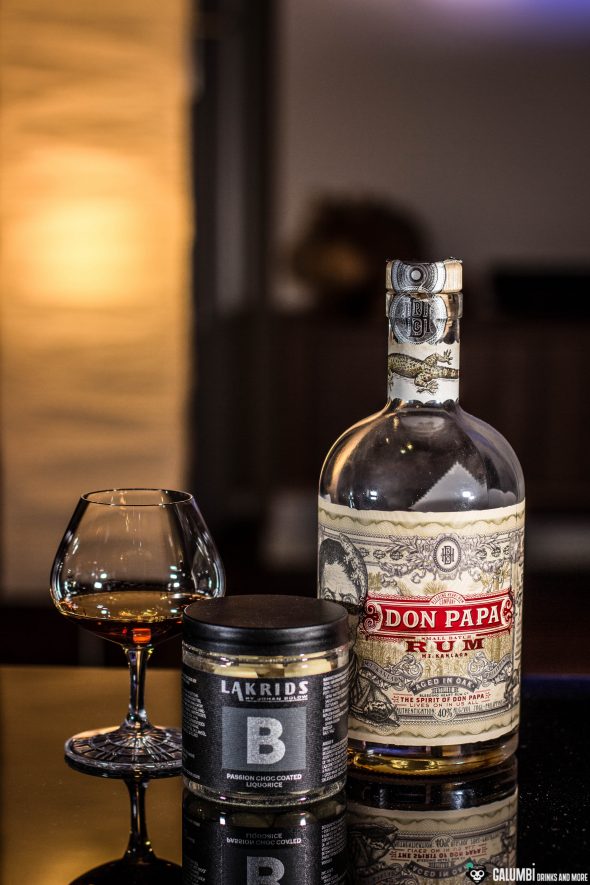 Admittedly, I adopted this combination from tasting at Stendels (where I got the idea for this article from), since it simply works wonderfully and could convince me immediately. The white passion fruit chocolate is simply made to match the flavor profile of Don Papa and both blend to an exotic symbiosis in the mouth. (I would like to exclude the much criticized topic of the sugar addition to rum, which is also practiced by Don Papa. Therefore I am not sure whether I’m going to buy a bottle of Don Papa again but I will definitely enjoy what is left.) 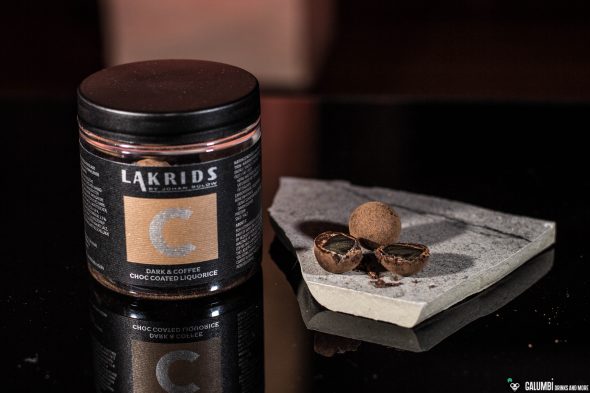 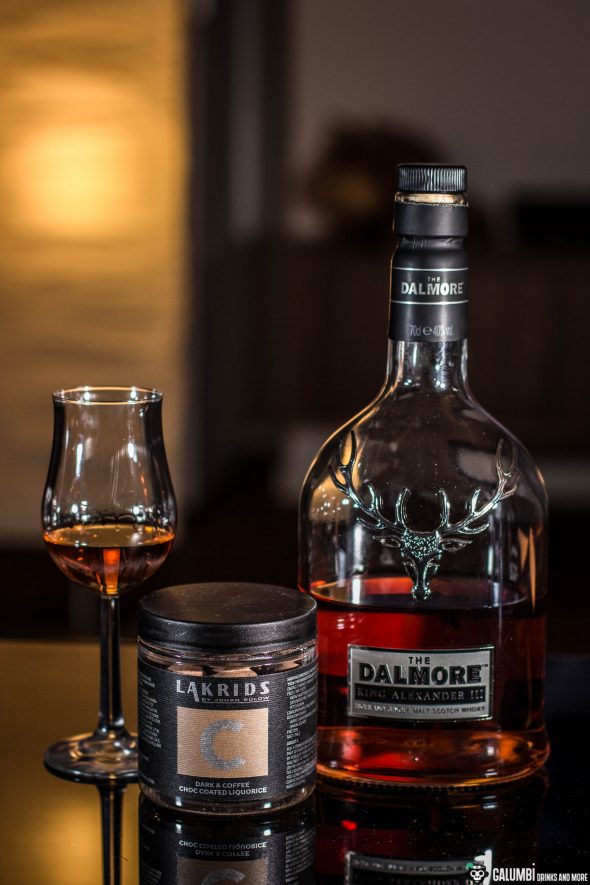 This variety will surely appeal to a lot of people because it is fairly trendy with dark dark chocolate and ground Arabica coffee beans. You can really call this a globally loved flavor profile and even though I drink very little coffee myself, this variety also appeals to me. In an interplay with spirits, I immediately had to think of one of my favorite whiskey distilleries, whose sherry-cask-matured whiskies offer beautiful coffee notes and roasted aromas: Dalmore. I can imagine to have the 12 or 15 year old Dalmore here, but with King Alexander III I chose a real premium whisky from the Dalmore range to combine it with a small nugget of delicate liquorice. (I will also not go into detail about the NAS debate in the high price segment of Scotch whisky here). 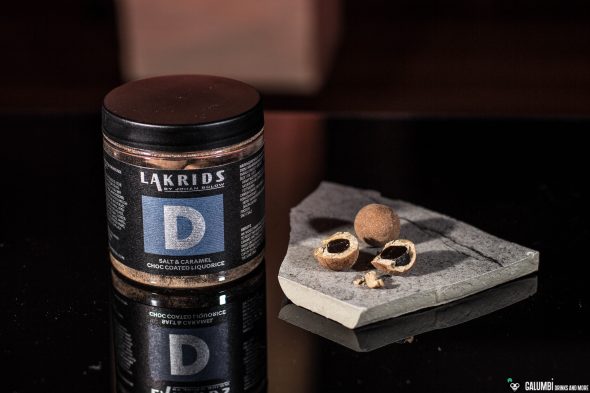 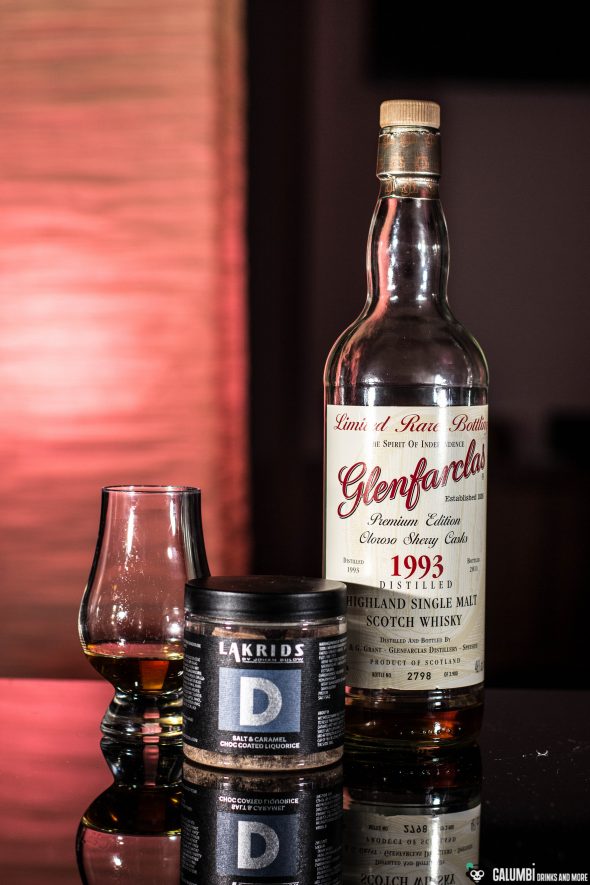 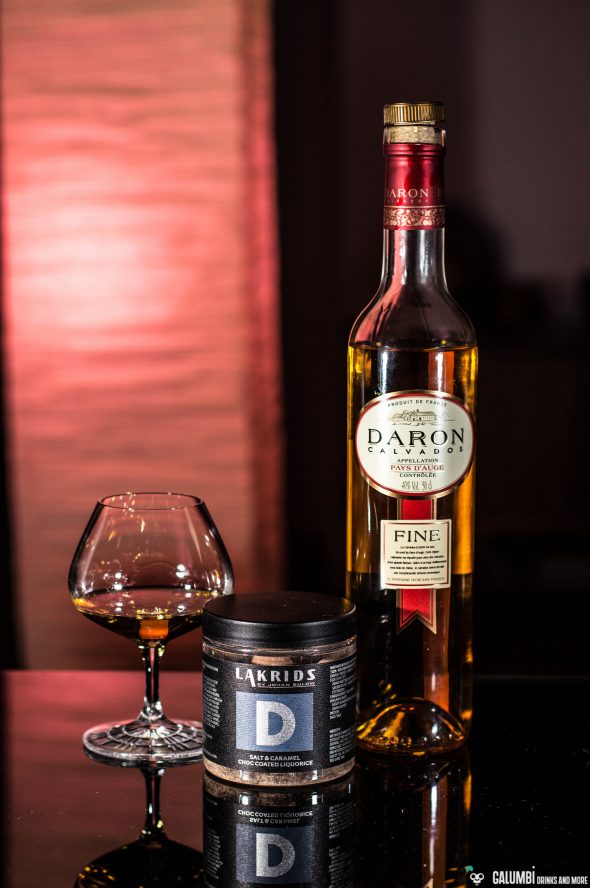 Salted caramel is really great! And if there is liquorice in addition to that, I am finally lost! And this is why Lakrids D would surely be one of the candidates for my favorite variety of them all, if I would have to choose one. And here, too, I opted for a single malt whisky as companion. With its malty aroma of dried fruits and cake dough it harmoniously combines with Lakrids D: I am talking about the much-beloved Glenfarclas 1993 Oloroso Sherry Cask, of which I unfortunately have only a tiny bit left. It also works great with the apple and pear notes of the Daron Calvados Fine.

Buying sources: Lakrids by Johan Bülow can be purchased in delicatessen stores or online. The same applies to the corresponding spirits

One thought on “Lakrids and Spirits”