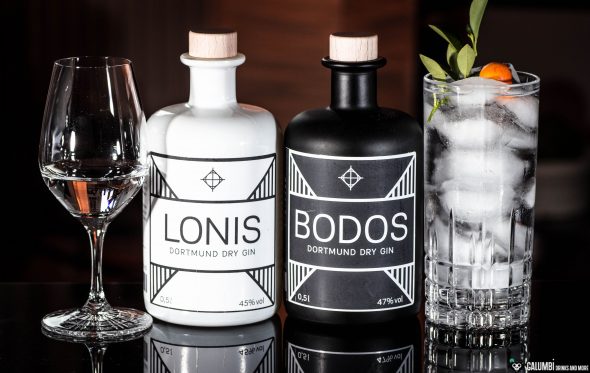 And once again it’s time for a gin on my blog. It is a mere truism to state that the gin market is booming, also in Germany. Nevertheless I believe it is still worth it to have a closer look on the matter and to stay open-minded for new releases. That was not really difficult for me when it came to the two bottles I’d like to review today, because while with the Edelstahl Dry Gin I have recently presented a gin from the Ruhr Area, both bottles in this article are even closer to my personal ancestry since they are from my city of birth, Dortmund.

For a long time I would have called it an almost utopian dream to once hold a “Dortmund Dry Gin” in my hands because the Ruhr region is not necessarily the Cockaigne of bar culture or the spirits market (I also wrote about this matter in my article about the Edelstahl Dry Gin), but fortunately this is changing a bit in these days. But of course there have also been some small centers of knowledge and enthusiasm here in the region for quite a while where wine and spirits are sold and profound expertise can be consulted. Such a centre is the wine and spirits retailer Stendels in Dortmund Kreuzviertel. But the business once started like many things in Dortmund started: with beer. In the postwar years the founder of the family business, Wilhelm Stendel, sold the amber nectar to the thirsty citizens of Dortmund, thus creating the basis for an initially successful business. They moved the business from the Dortmunder Nordstadt to the Kreuzviertel where it is still located today (on Vinckeplatz 8). Because of some differences between the two sons of the founder, Bodo and Wilhelm jun., his younger son Wilhelm jun. took over the business in the mid-70s. Then, since the end of the 80s, the present owner Gabriele Krösche, née Stendel, the daughter of Bodo and Apollonia Stendel joined the business and the range of products was extended to wine, whisky and delicacies. Since 1998 she was then acting as managing director together with her cousin, but in 2001 she retired because of some other differences between the two. Finally she took over the business entirely in 2012 and newly founded the company. Meanwhile you can find over 700 whiskeys, 100 gins and 80 rums next to a a worldwide wine assortment. On weekends Stendels also hosts nice tasting events for interested connoisseurs (in case of interest it is advisable to look at the event announcements on the small firm’s website). So far so good.

Now, you might wonder why I tell all this here and what relevance genealogical remarks to the Stendel family have here on my blog. But in fact there is a connection to the two bottles I’d like to introduce here. Attentive readers will certainly have noticed the names Apollonia (nicknamed “Loni”) and Bodo who are the parents of the present owner (Bodo died in 2015). And these two have been the name givers for the two Dortmund Dry Gins. 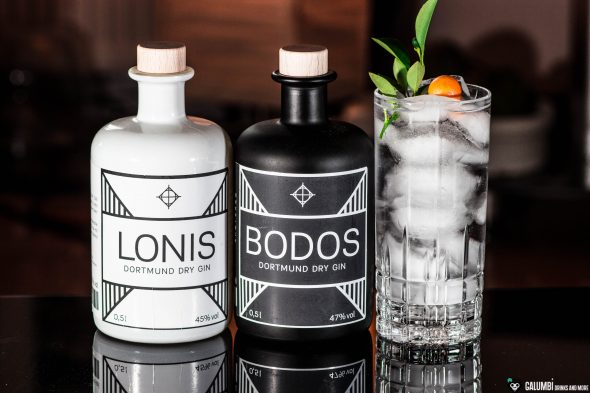 Both bottlings are created in the style of Dry Gins, but in this case it was the intention to not just introduce another dry gin to the market but to be as close as possible to the classical category of Old Tom Gins without entirely leaving the basis for being allowed to call the distillate a Dry Gin. And that manifests a clearly pronounced sweetness in the gins compared to other Dry Gins. Both Gins were also a little bit inspired by two internationally successful gins whose names are nonetheless not told by the manufacturer. Equally mysterious remains the exact origin of the gins because the house Stendels decided not to publish any details about the distillery where the gin was made. Also the Botanicals remain a bit obscure but you certainly don’t have to hire a reputable private investigator in order to detect at least the usual suspects of the genre.

The Gins are meant as a pair but of course they are not the same and rely on different flavors profiles: Whereas the Lonis Dortmund Dry Gin is more concerned with the milder and softer side, which should provide especially a rich lemon, the Bodos Dortmund Dry Gin promises to be more a representative of the herbaceous and junipery trait of Dry Gins, without however neglecting the floral and citrus notes.

As my Tasting Notes will show, both gins are outstandingly good. And I do not say this because they are particularly close to my heart as a native Dortmund citizen but because they actually also surprisingly differ from gins I tasted lately. So a sincere compliment to house Stendels and a strong recommendation for all friends of good gin. Both distillates come along in beautiful apothecary bottles. The design is rather simple, but fits the Ruhr region. 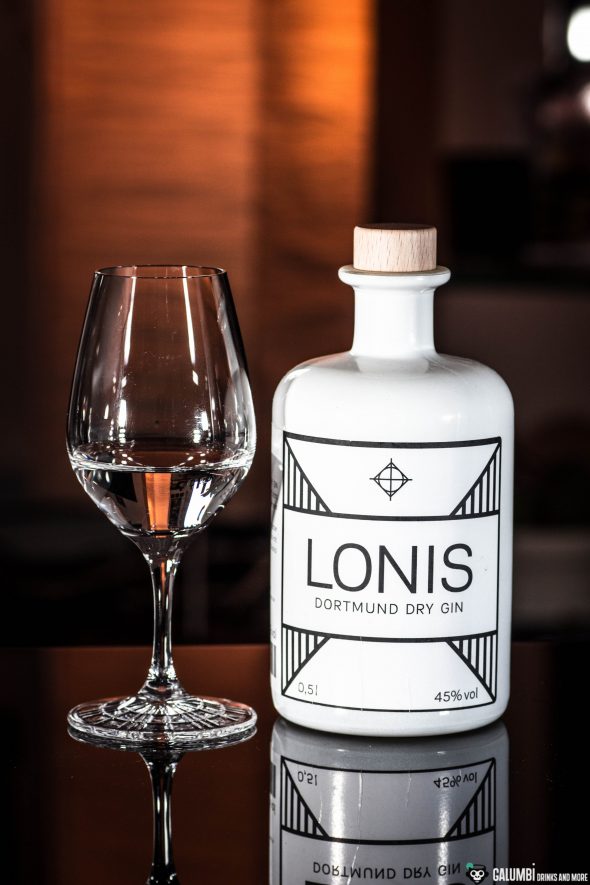 Aroma: Immediately there’s a rich lemon on the nose, Juniper is also noticeable, but only very subtly. I can scent a beautiful complexity of the lemon which even tends towards lime. There are also clear associations of cinnamon, some violets and a hint of bright fruit, such as quince. In the background there are subtle herbaceous tones and a very gentle pine.

Taste: also on the palate the Lonis Dortmund Dry Gin turns out fresh and lemony with a floral spice, almost like from herbal lemonade. The gin is very mild (there is hardly a trace of alcohol) and surprisingly sweet, almost with a hint of liqueur (I had to repeatedly think of Danziger Goldwasser, but of course not with that amount of sweetness and stickiness). The juniper part is super discreet, who thinks to not like gin because of the juniper could possibly be swayed by the Lonis Dortmund Dry Gin. In addition I can find citrus peel, again some cinnamon, lime and maybe a little thyme. 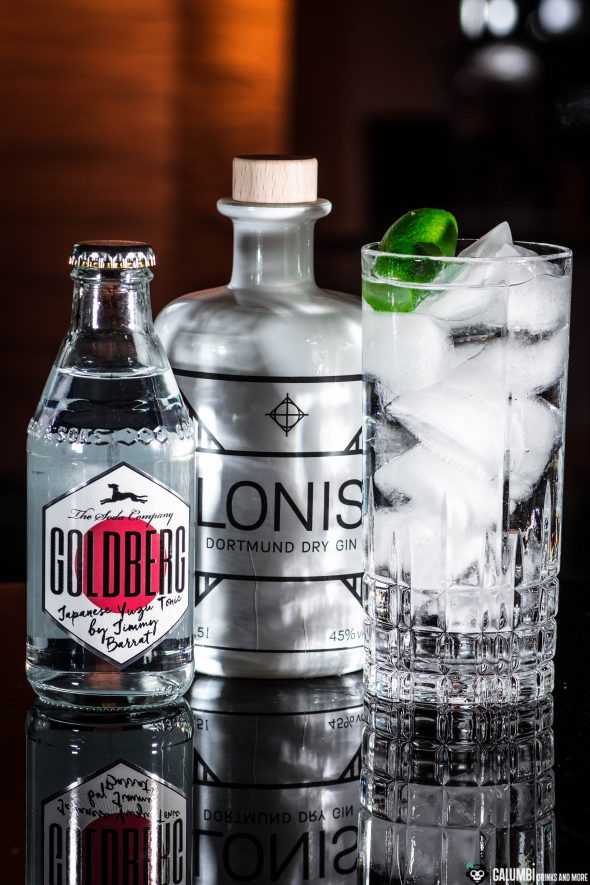 The Lonis Dortmund Dry Gin is absolutely tasty and delicious, so you can also easily enjoy it neat. I have also tried it in a Gin & Tonic and opted for a Goldberg Japanese Yuzu Tonic. You will experience a true symphony of citrus tones, which almost redefines the G & T highball. 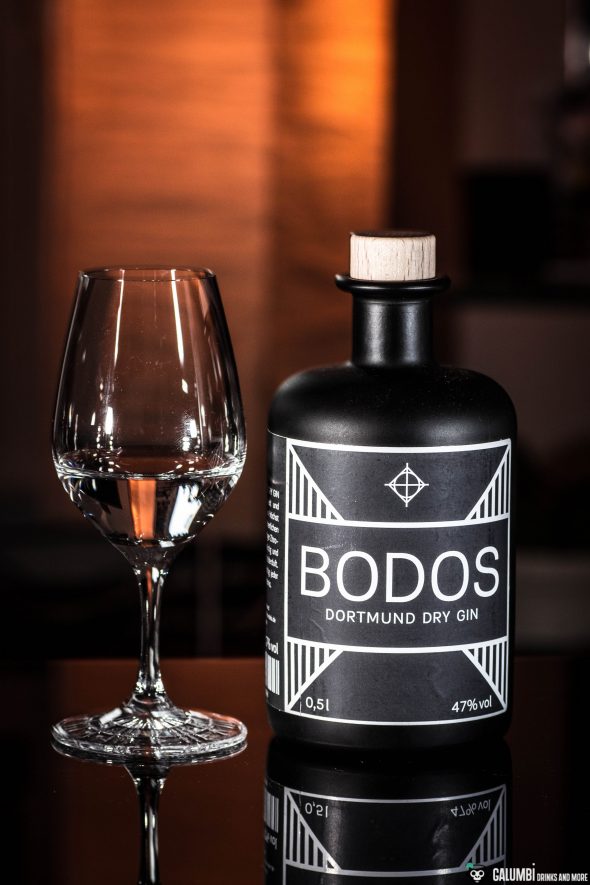 Aroma: Again there is a clearly pronounced lemon which changes a little bit towards bitter orange peel after some time. The Bodos Dortmund Dry Gin offers a more distinctive juniper; but also it is not a gin I would completely situate on the juniper side. It mingles complex herbal tones with woody and mossy associations alongside some pine. Ultimately it is noticeably stronger on the nose.

Taste: more powerful, but still mild with nicely integrated alcohol, well balanced juniper and a spicy lemon. Herbal notes are stronger and in total the Bodos is less sweet than the Lonis. But it nevertheless remains smooth with a little clove and again some pine notes. 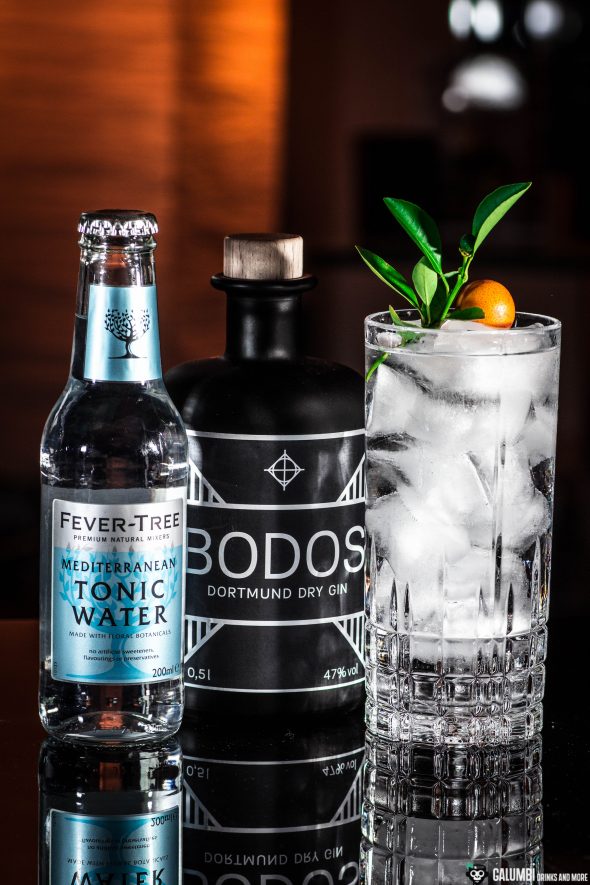 The Bodos Dortmund Dry Gin will also convince friends of having a gin neat, but turns out significantly more classical than the Lonis does. In a Gin & Tonic I have combined it with Fever Tree Mediterranean Tonic Water which I liked very well. The herbaceous and fresh character of the Mediterranean Tonic Water combines nicely with the tart aromas of citrus and juniper the Bodos hast to offer, without taking too much of its autonomy.

Buying sources: Both gins can be bought at the wine and spirits retailer Stendels on Vinckeplatz 8 in Dortmund.