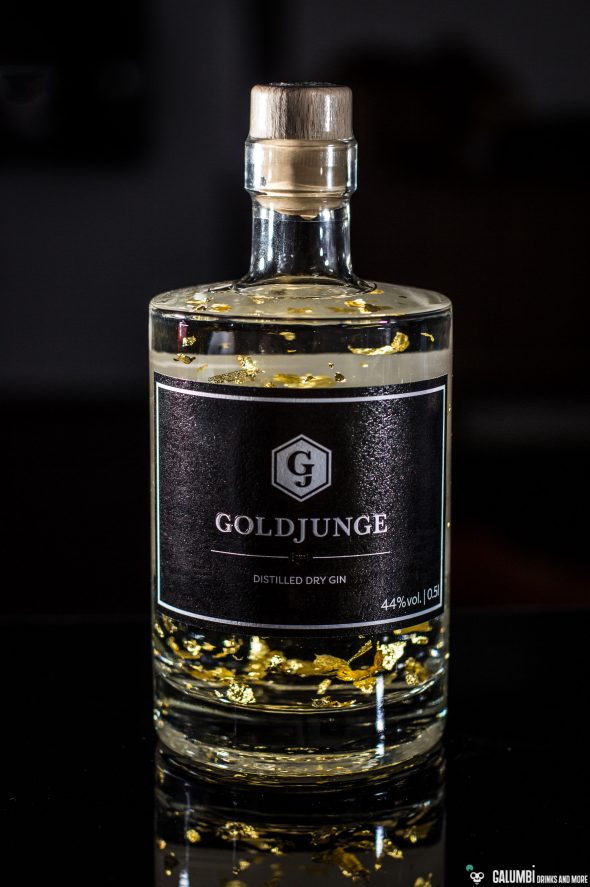 Huge, hard-fought, attractive for newcomers and bloated: many observers describe the international (and also the particular German) gin market with such words. And also for me it is not an easy task to decide which gins I want to write about at all. Some are already “over-reviewed”, others are not that interesting for me personally and with all this in mind I have to admit that my gin enthusiasm is put to a test by the constant flood of new releases. (provided test product)

The gin I am reviewing today has at least managed to arouse my curiosity. And, of course, it also stands out visually from the broad mass of gins. Where the battle for the most extraordinary botanicals usually rages, the manufacturer has thought of a tiny trick and thereby created an attractive selling point for the market. The Goldjunge Gin therefore honors its name (“Goldjunge” means golden boy): fine gold flakes float in the liquid of this and make it look noble and pretty. Admittedly, there is a certain danger of becoming kitschy if you put gold into your spirit, but to me it is rather a positive thing because it reminds me of Danziger Goldwasser which my grandfather always had in a cupboard. (Of course, when I was young, I was only stunned by the floating gold, I did not drink alcohol in that time.) Perhaps this is also one of the reasons why the Goldjunge Gin was so appealing to me from the outside.

But now enough of the prelude: The Goldjunge Gin comes from the city of Pforzheim, which is also known as the “Goldstadt” (city of gold) (marketing hooray!). Pforzheim is historically known for its jewelry industry. In 2017 the city even celebrated the 250th anniversary of the jewelery and watch industry. The head behind the Goldjunge Gin is Jan Armbruster, who named his gin promptly after his own nickname that his mother gave him (and, of course, because it fits into the marketing concept). The Goldjunge Gin is distilled by a distillery in the city of Baden-Baden (the name of the distillery is kept secret) and here we definitely encounter a snag to the story of the Gin from Pforzheim (a little bit similar to the Lonis and Bodos Dortmund Dry Gin which is not made in Dortmund). But ultimately, I’m not here to retell the whole marketing story of a certain spirit, but to have a closer look on the inside. The Goldjunge Gin is distilled three times and then bottled with 44% ABV. Before this, 22 botanicals are allowed to macerate in the base alcohol, of which besides the juniper only citrus fruits, elderflower blossoms, lavender blossoms, angelica roots, coriander seed and raspberries are mentioned. The list of known botanicals definitely appeals to me and I’m curious, what I will find in the Gin with its 22-carat gold flakes floating through it. It is declared a Dry Gin. 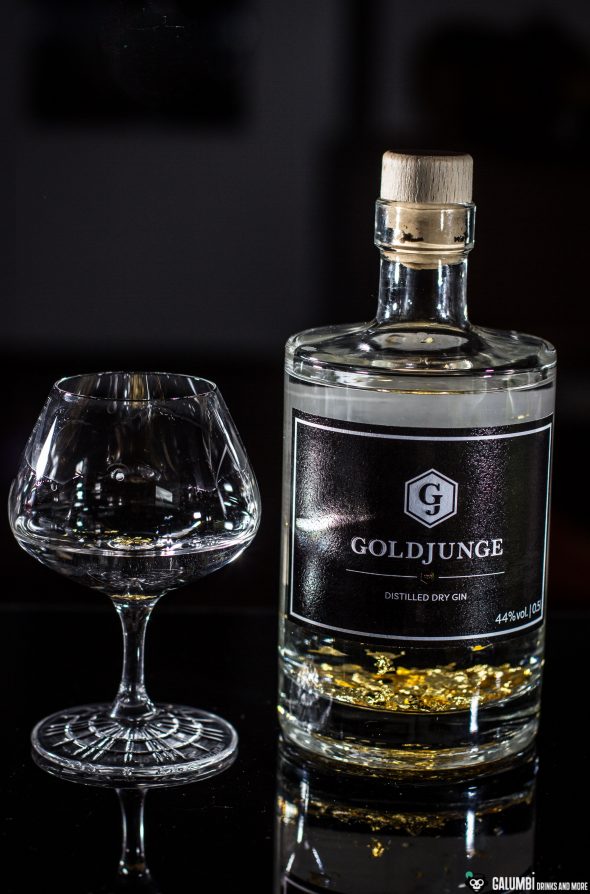 Aroma: On the nose this gin is definitely more based on the fresh and slightly fruity side. Although the juniper is clearly noticeable, the main role is played by the citrus tones and also by the raspberry. There is no way to deny hints of raspberry eau de vie and it mixes with the spicy notes of the other botanicals, thus creating a fresh and spicy smell. Here, too, I wonder whether my senses are associatively cheating me but I still have to think a little bit of Danziger Goldwasser. Maybe there is liquorice among the botanicals that are not mentioned? Quite possible. The nose is not groundbreaking or outstanding, but it is solid and quite appealing.

Taste: The Goldjunge Gin is much more spicy on the palate. The juniper is more pronounced, the citrus fruits take a backseat compared to the nose but are still present. Lavender is clearly there but on the other side the raspberry is somewhat more subtle. Again I have to think about licorice. All in all, this gin shows a fresh and spicy nose and a spicy and fresh flavor: the aromas shift a little. It’s certainly not the best gin I’ve ever tasted, but I like it.

Finish: dry and rather spicy 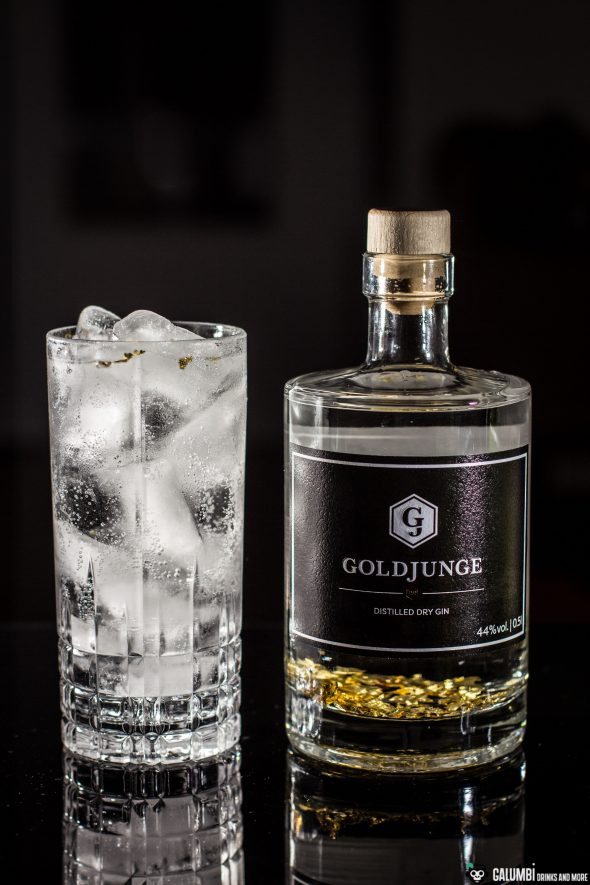 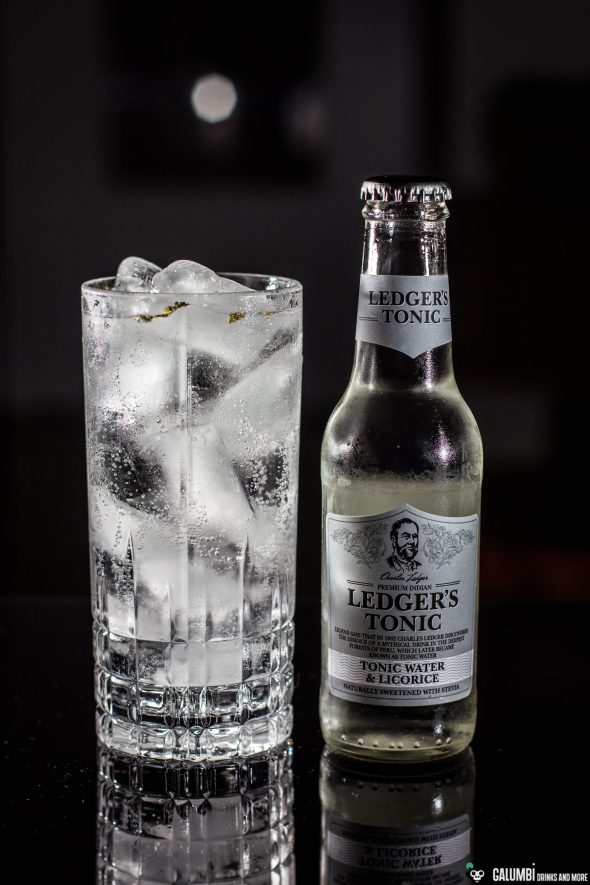 Also in a Gin & Tonic the Goldjunge Gin visually cuts an interesting figure. Perhaps because I still had the Danziger Goldwasser in mind, I opted for a liquorice tonic to pair it with this gin. The fact that licorice goes well in combination with raspberry can be experienced in many contexts (for example here). It is not long ago since I have subtly integrated both notes into an Icelandic inspired Martini. Anyway, I like the Goldjunge Gin with the licorice tonic. 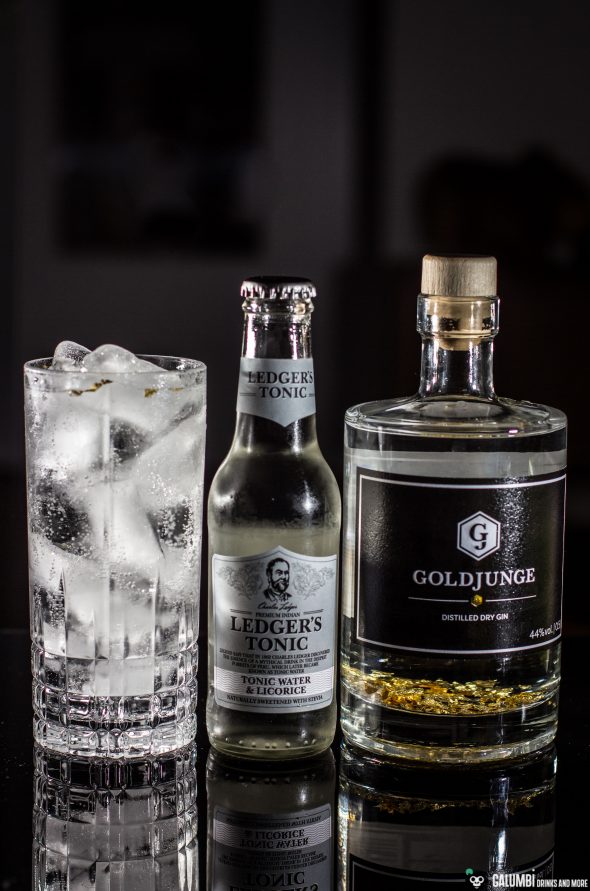