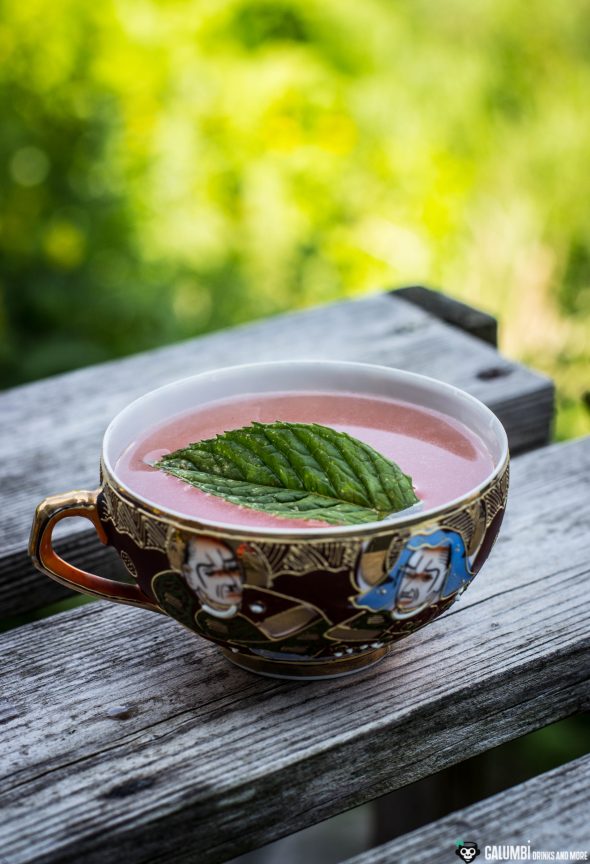 Mexican agave spirits are a recurring topic when it comes to bar trends and forecasts. However, a comparable breakthrough, as it was granted to Tequila, Mezcal and Co. in the USA during the last decade (and partly also in hotspots such as London) has not yet been achieved in continental Europe. Of course, this is partly due to the still dubious reputation of the party shot flanked with salt and lemon, but perhaps also to the still not quite competitive bar presence compared to gin, whisky or, of course, vodka. With this in mind, the subject of today’s article is a very pleasing and exciting one, as it is all about spreading diversity. (provided test products)*

And responsible for this is the brand Topanito, about which I have also reported several times in the past (here, here and here). Topanito has expanded its range with a series of bottlings called Mezcal Artesanal, which are based on different wild agave varieties. The ambition is quite clear: to make the spectrum of mezcal diversity accessible to a wider audience, and in doing so to show how different this spirit can turn out to be. I am, of course, particularly pleased to be able to make my own impression of the three new varieties, which go by the melodious names of Madre Cuishe, Tobalá and Tepeztate. The latter Tepeztate in particular is the focus of today’s article, as I was able to taste it more intensively and, above all, with a view to its potential as a cocktail ingredient. 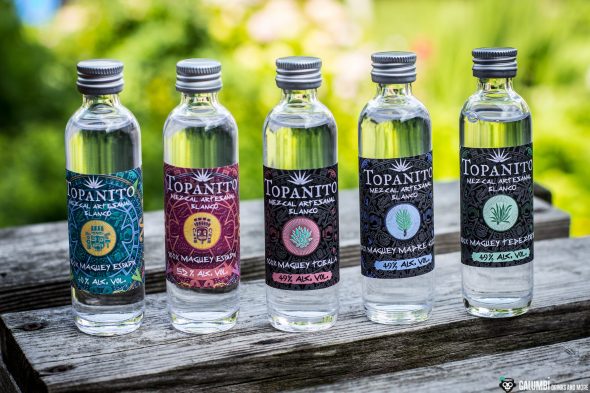 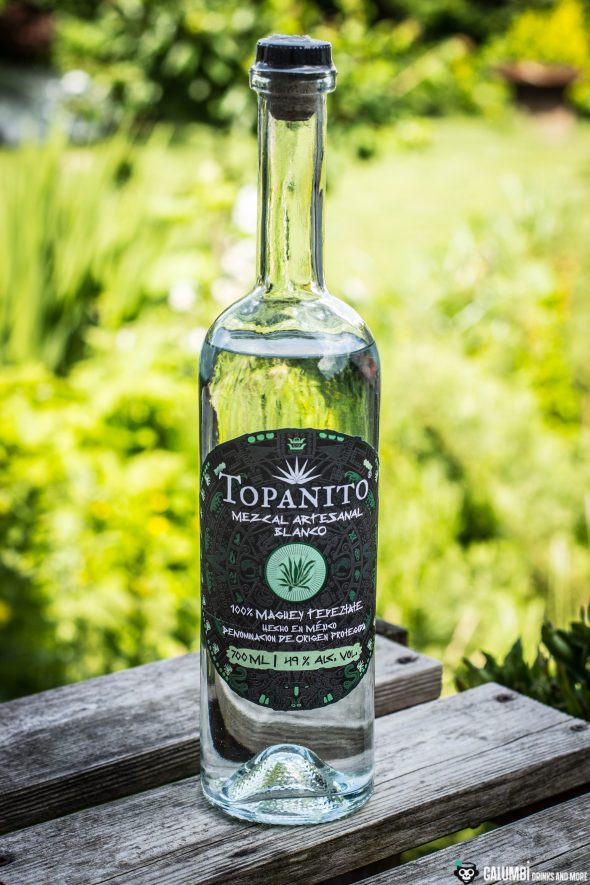 All mezcals mentioned are produced in the Mexican state of Oaxaca in the Amantes de lo Ajeno distillery (more about the production process and some background information about the mezcal genre I described in this article a long time ago, which is why I do not want to go through the well-known processes around Pinas, Tahona and Co again). But perhaps it should be mentioned that in the Amantes de lo Ajeno distillery the Tahona is actually still operated by a donkey.

The fermentation of the cooked agaves continues for five days and then the Mezcal Artesanal is distilled on copper alambiques.

So far, almost all of the mezcals reviewed here on the blog have been based on the Espadin variety of agave, which is the easiest to cultivate due to its growing characteristics. The bottlings that have now been added use the agave varieties, which are also reflected in the name of the bottlings: Madre Cuishe (an earthy, mild variety), the Tobalá agave, which is reminiscent of berry notes, and the Tepeztate variety, which is fruity and green in its later flavor.

In fact, the variety of flavors is impressive and I can only recommend to anyone who would like to think outside the common mezcal box a bit more to convince themselves of the differences between the qualities mentioned. In detail, however, I would like to talk especially about the Topanito Mezcal Artesanal 100% Tepeztate.

Absolutely impressive here is the sheer age of the agave, which is usually allowed to grow up to 30 years or more before it is finally made into this Mezcal. The Tepeztate agave grows on steeper slopes between 1400 and 2000 meters surrounded by wild herbs. It has a rather low sugar content, which of course is a disadvantage in distilling and requires a larger quantity of the agave. So, in summary, a relatively old age, a low sugar content and the more difficult harvesting conditions on slopes are rather disadvantageous aspects, but they just make the result all the more special.

But now in medias res:

Aroma: Ok, this one is definitely different than what I’ve known and been used to. It’s not completely unmistakably different, you already notice immediately that it’s a mezcal, but it really shows a new and exciting side. I actually find a lot of fresh and green notes, exotic fruit (kiwi?), but especially green apple, plus lime tones and earthy grassy notes, as well as some green bell pepper and a hint of cucumber. Plus mineral tones, some salt and of course an aromatic smoke.

Taste: Oh yes, I like this! Fruit is present again, led by limes and mangoes, plus some papaya; grassy, earthy notes are also on the palate. A nice, balanced smoke combines with a very smooth, almost creamy mouthfeel; nuances of white pepper and mineral salt emerge, again a hint of bell bell pepper and diffuse herbs in the background. The green label design is absolutely appropriate for this mezcal, it tastes ripe, very complex and yet fresh and “green”.

Definitely a great mezcal! But what do you do with it now? Of course, you could try through numerous mezcal classics here, which would certainly be a lot of fun. However, I wanted to try something new and went with a sort of Mexican-Japanese fusion idea. To do this, I made a syrup of sugar and Szechuan pepper (yes, I know, homemade syrup again, sorry), which is then shaken alongside blood orange juice, some umeshu, green tea and fresh lime. The Oaxaca Sadō is really a nice drink. 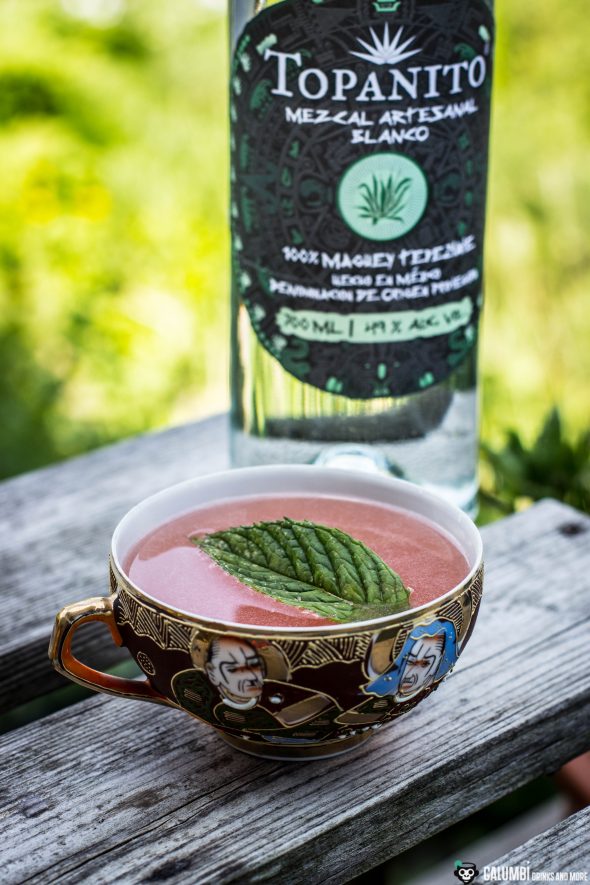 Szechuan pepper syrup: Simply add sugar, water and not too finely crushed Szechuan pepper (it should still be possible to filter it out) in the ratio 3:3:1 to a pan and bring to a simmer. Then let reduce over not too high heat until a syrupy consistency is formed. Pour through a fine sieve and store in an airtight container. Will certainly keep in the refrigerator for several weeks.

Preparation: shake all ingredients vigorously in a shaker on ice and double strain into a pre-chilled glass/teacup. 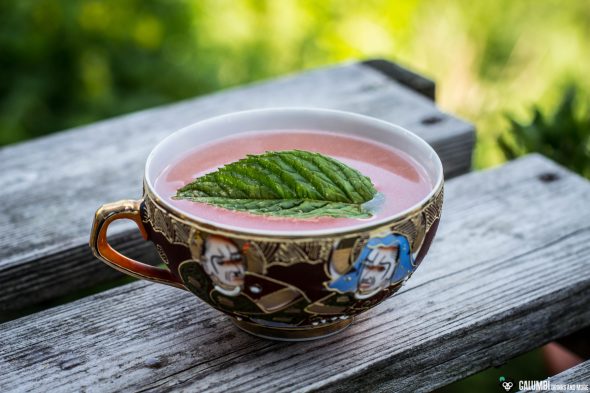 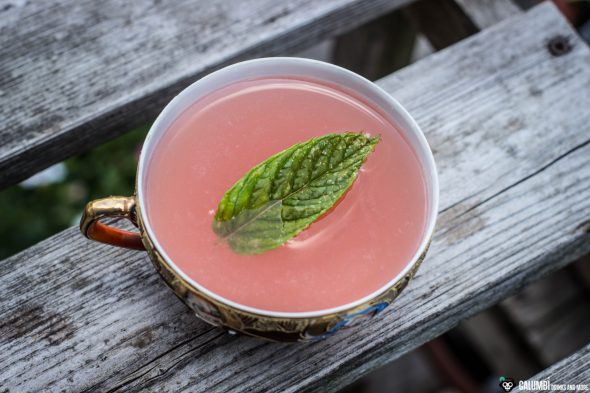