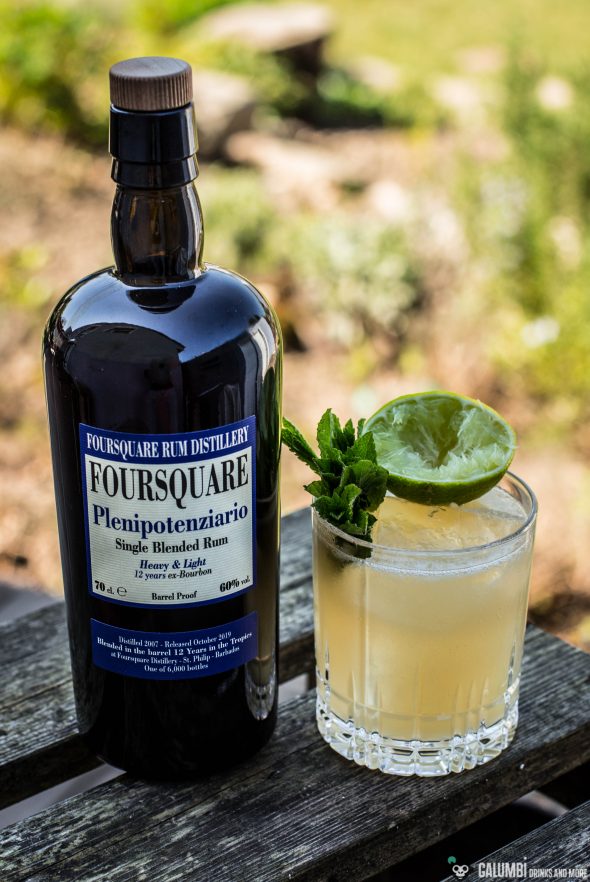 When I first started to devote myself to rum, today’s common awareness of the different styles, the addition of sugar, glycerine or vanillin, which is unfortunately practiced by many manufacturers, was not raised at all. My first orientation in the rum world at that time was still a division into the so-called Spanish, French and British rum style, as you can still find it in some rum literature today. Although this classification is not necessarily completely absurd, it is now also considered outdated and not very meaningful. A distillery with which I connect a real aha- respectively awakening experience is the Foursquare Distillery from the island state of Barbados.

Of course, those who think of Barbados and rum will probably first think of Mount Gay, where they can adorn themselves with the title of the oldest rum distillery of the world. However, those who know a little bit about rum will surely also think of the name Foursquare. If I think back for example to the nine-year old Foursquare Port Cask Finish, that once was available for an affordable price, I still get into raptures. The Foursquare Distillery (officially part of R.L. Seale & Company Ltd) was founded in 1920. Today it is managed in the fourth generation by Sir David Seale and his son Richard Seale. Besides Richard Seale, Luca Gargano (Habitation Velier) is also responsible for today’s bottle, who should be familiar to every rum lover. 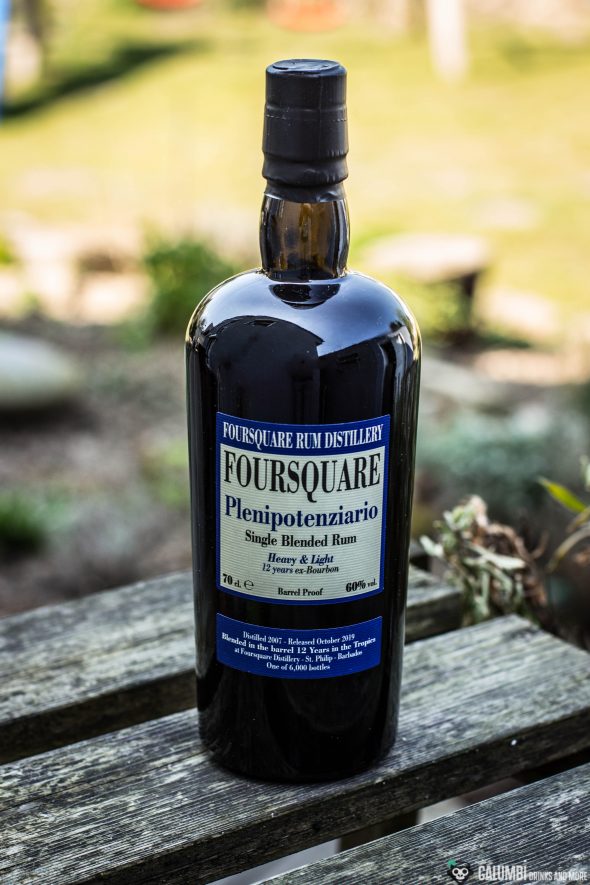 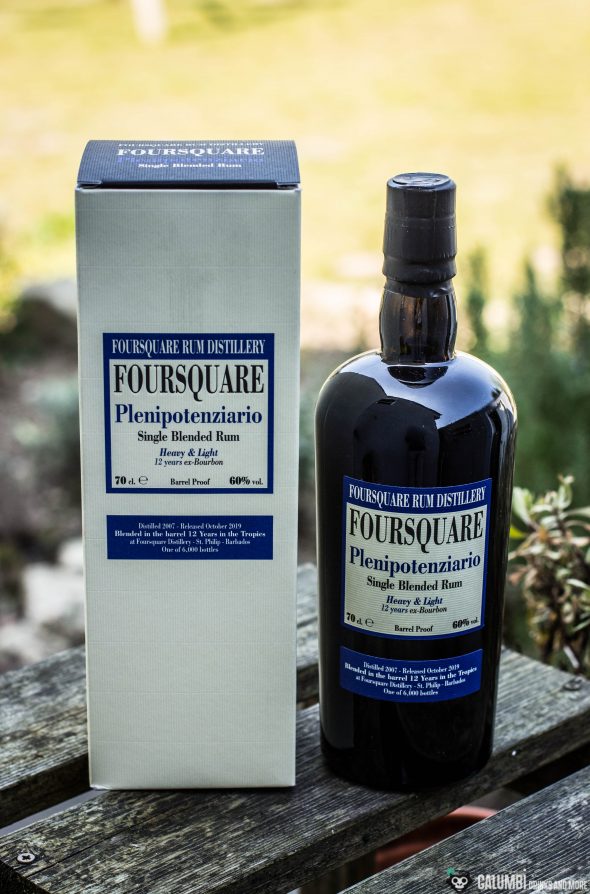 The rum goes by the spectacular name of Foursquare Plenipotenziario (spectacular at least for non-Italians). According to the manufacturer, this name, which is close to a tongue twister, goes back to Richard Seale (who obviously has to speak Italian well) and means “assignee or plenipotentiary”  according to the Google translator. This may not make much sense at first with regard to a rum, but the bottle label teaches us that the term (probably also) means “with full powers”, which would not refer to the office of the authorised representative, but rather his full powers. Well, I personally rather suspect Mr Gargano as the person actually responsible for the name (even if only as translator), but the name of this rum makes me smile a bit. 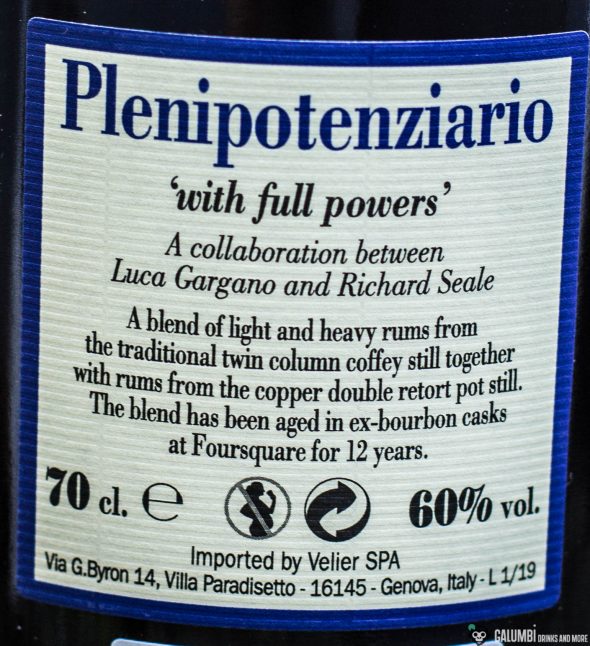 So be it. The Foursquare Plenipotenziario (the more often you read it out loud, the better it gets off your tongue!) is a rum blend of light rums distilled on the traditional “Twin Columns Coffey Still” of the Foursquare Distillery and heavy rums from the copper “Double Retort Pot Still”. It matured tropically for 12 years in former Bourbon barrels and was then filled directly into the bottle at cask strength (60% abv). The year of distillation was 2007 (the year of bottling was October 2019). The price of the bottle is about 140 Euro, so you have to invest a little bit. But if you are familiar with Velier bottlings, you will know the price (but definitely also the quality) dimensions, many of these bottles offer. Well then, now to the all-decisive question: How does the Plenipotenziario taste? 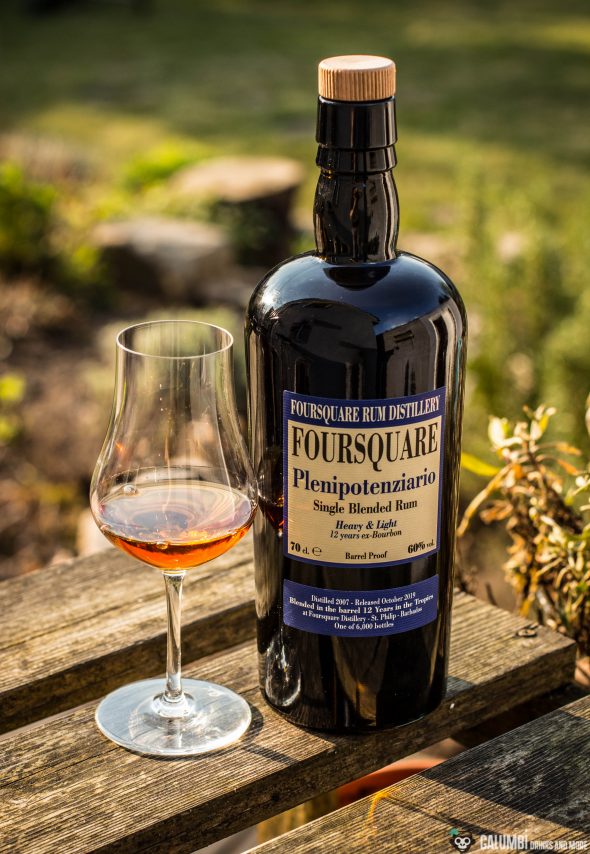 Aroma: The rum, which moves heavy and oily and leaves legs that slowly run down the glass wall, immediately exudes a very impressive scent. Although it does not immediately reach the heaviness and force of some Jamaican rums, in view of the blend of light and heavy rum this is certainly not intended here. Nevertheless: you cannot call it a weak aroma anyway, because the Plenipotenziario is without question presenting itself swollen with pride right from the start. A complex interplay of spices and fruits forms the first articulated thought that comes to my mind. Above all, I find ripe, authentic mangoes, the likes of which I have rarely or never found in a rum before. Have I ever attested mango flavours to a rum? If so, you can safely forget it, because here the mango greets you with a verve, which is incomparable! I also find ripe bananas, pineapple, guava, passion fruit and a hint of lime peel. From the beginning, there is a fine cinnamon aroma, ground pepper and spicy nuances of oak wood. In general: the barrels also leave their signature in the rum, although it needs some time to develop: fine vanilla tones, fully ripe oranges (which I didn’t spot at first) and also some milk chocolate are present. A great nose, which you can have fun with for hours!

Taste: I cannot really make out what I am first encountering here. Right from the start, fruits and spices show their wild dance on the palate. Limes, oranges, some vanilla and oak, the mango is a bit more reserved here, but present again and comes along a bit woody, which I like very much. The cinnamon is only weakly pronounced on the palate, but I find very interesting notes of red peppercorns, currants or rose hip. Behind that there are again some citrus peels. Nutmeg and cloves are included; the Plenipotenziario is pleasantly dry and complex on the palate.

Finish: medium to long with spices, cut apple wood and a little cocoa

Well, do you want to use a rum of this price range in a cocktail? Absolutely! Moreover, here I simply chose a classic Mai Tai, in which the rum with its strong mango aromas really cuts an excellent figure and sets a benchmark. Although I wrote about the Mai Tai a long time ago, here is the recipe again, in which I once again rely on Pierre Ferrand Orange Curacao, but above all, I do not ever want to miss the really best orgeat on the market: the Meneau Orgeat. 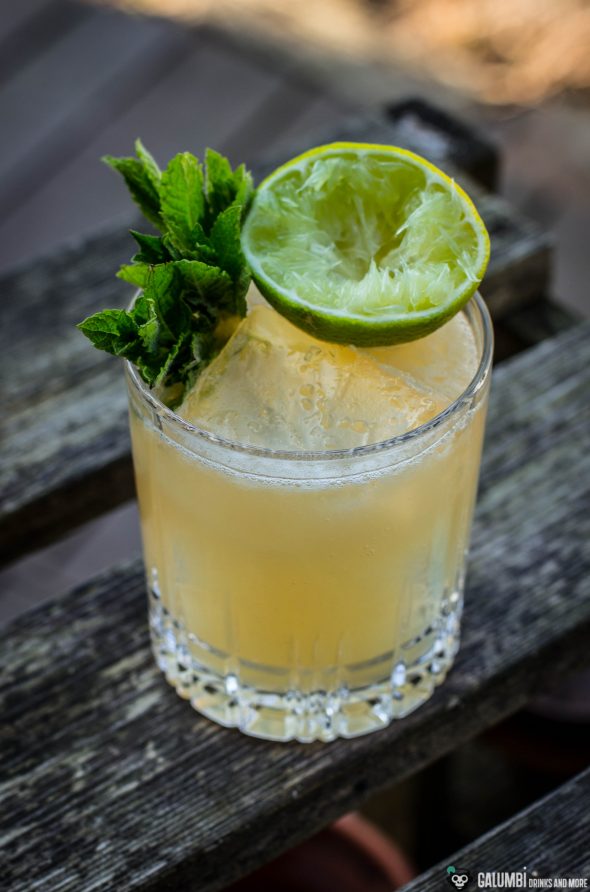 Preparation: Shake all ingredients vigorously on ice and strain into a glass filled with fresh ice.

Garnish: twig of mint and squeezed lime half 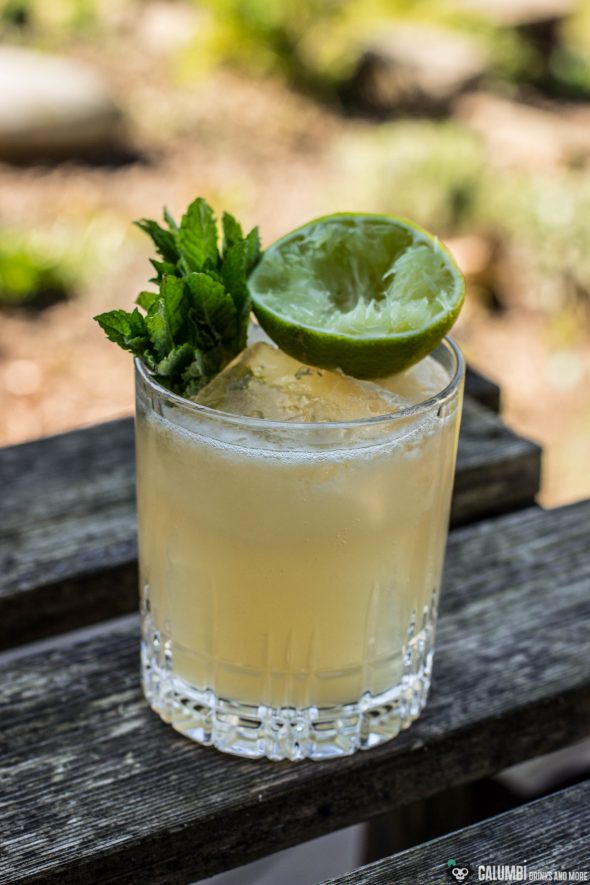