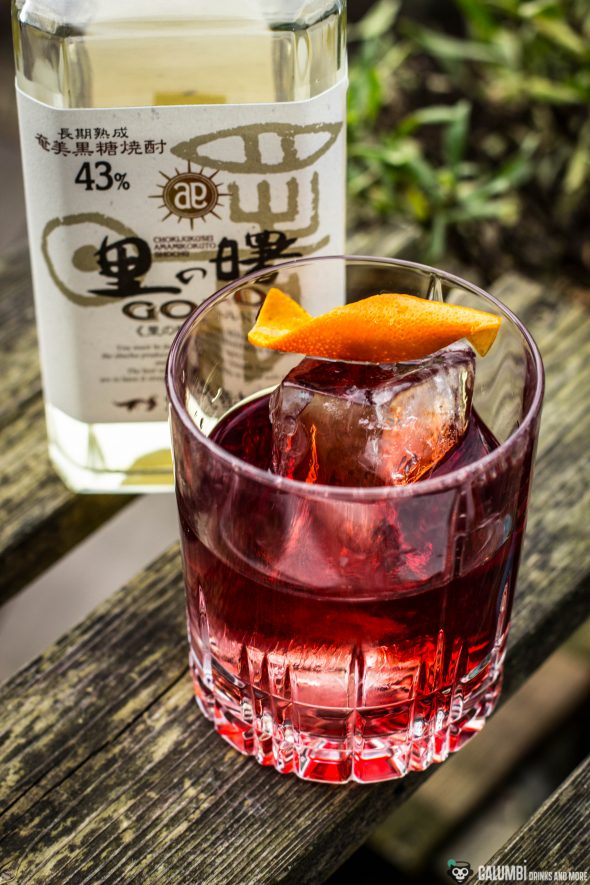 Shōchū – unfortunately the genuine Japanese spirit is still quite underrepresented outside of the land of the rising sun, yet it is such a traditional, multi-layered and exciting spirit! In this respect, I am really happy to be able to write about a Shōchū again after some time. Moreover, today it is about a very special and recently awarded representative of its kind! (provided test product)*

Once again, as a reminder: Shōchū is a spirit which can be made from various starchy raw materials. These include rice (kome Shōchū), barley (mugi Shōchū), sweet potatoes (imo Shōchū), but also sugar cane (kokuto Shōchū), sweet chestnuts (kuri Shōchū), buckwheat (soba Shōchū, you may know the very healthy noodles of the same name) and in fact there is also a producer who makes his Shōchū from milk (gyūnyū Shōchū). However, there are also other varieties made from sesame, corn, shiso and other raw materials (a total of 53 raw materials are approved for the production of Shōchū). The name Shōchū means as much as “brandy” and was probably finally brought to Japan from the Chinese or Korean cultural area. It is no longer possible to find out exactly when it was first produced in Japan under the name Shōchū. The cradle and at the same time most important production site of the Japanese Shōchū is located in the south of the island Kyūshū in the port city of Kagoshima. The oldest written records about Shōchū date back to the 16th century and go back to the Spanish Jesuit Francisco de Xavier, who also notes in his description of the Japanese “arak made of rice” that he had never seen a drunken Japanese running around, as they would go to sleep immediately when the drunkenness sets in. 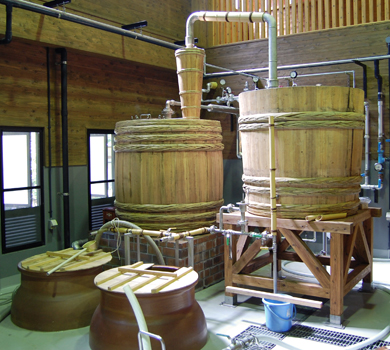 During production, the raw material is mixed with a special Kōji mould and fermented over a period of several weeks. There are different types of Koji, the white Koji stands for Shōchū with a light taste, black Koji on the other hand provides an intensive and strong taste, finally yellow Koji leads to fruity aromas (and is mostly used in sake production). Depending on the Shōchū type, one or more distillations and subsequent maturation processes are done (it matures mostly in steel tanks, but barrel maturation is also possible). Multiple distilled Shōchūs are also known as kōrui shōchū (焼酎甲類) or class A-Shōchū, the single distilled ones as otsurui shōchū (焼酎乙類) or class B-Shōchūs. However, one should not be irritated by the designations class A and class B, because (at least for me and probably for most people interested in cocktails) the clearly more interesting Shōchū comes from class B. With every distillation certain flavor-bearing substances are lost and so it is not surprising that most of the kōrui shōchūs are completely odourless and tasteless. It is true that this variety is often “recommended” for use in cocktails, but as so often when something is recommended for cocktails, it is unfortunately the other way round (unless you drink it just for the effect, which I hope you don’t). The otsurui shōchūs, on the other hand, retain their own character, which already starts in the fermentation process and is based on the raw material used.

The often encountered description as “Japanese vodka” thus makes sense somehow for the class A-Shōchūs, but not quite in the end, since the alcohol strength of Shōchū is classically much lower than that of vodka. That this is fortunately not always the case, however, is proven, among other things, by the Shōchū which is the subject of today’s article. 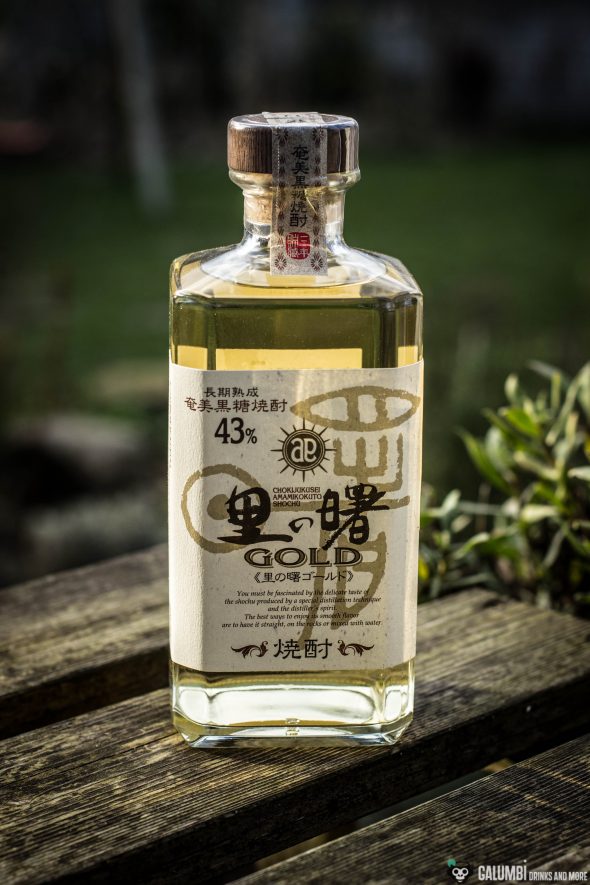 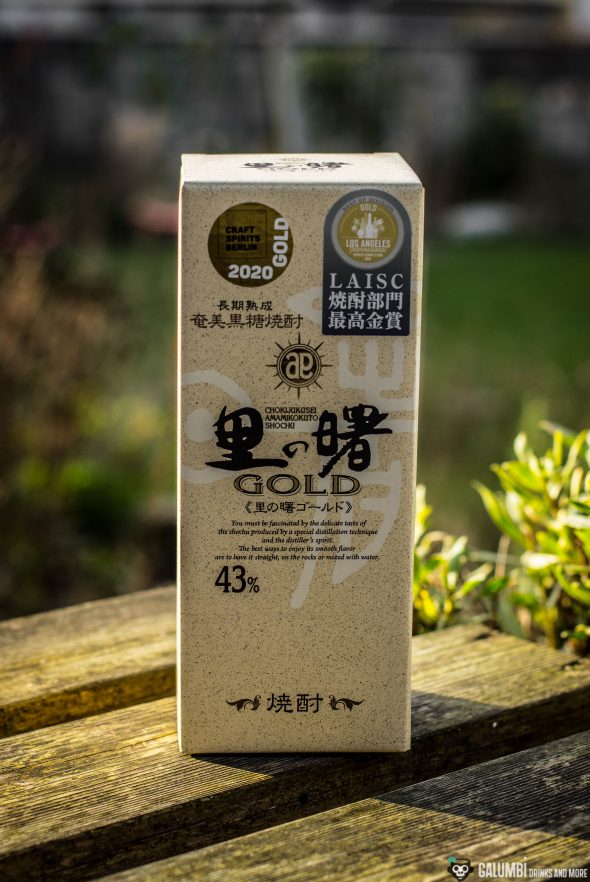 The Sato No Akebono Gold – that is its sonorous name – was – I mentioned it at the beginning – recently decorated with some awards. At the Berlin Craft Spirits Awards 2020 it received the gold medal while at the International Spirits Competition in Los Angeles in 2018 it was also awarded a gold medal. In the past, I have often uttered my scepticism about spirits competitions and I always stick to looking at them in relation to the circumstances, but of course one has to admit that usually there are people passionate about spirits making their judgments – even if economic interests always play a role. But anyway, I don’t really want to talk about spirit competitions, but about the Sato No Akebono Gold Shōchū.

This is an undiluted Shōchū (a so-called Genshu) with an alcohol strength of 43% vol. – and that is for me an absolute plus point compared to the Shōchūs which I tasted here in the past and which had a significantly lower alcohol content. The Sato No Akebono Gold Shōchū is distributed in Germany by Ginza Berlin GmbH and comes from a small island called Amami-guntō, about an hour’s flight from Kagoshima in the prefecture of the same name. It is a kokuto Shōchū made of brown cane sugar, which may only be produced on Amami-guntō. Basis for the fermentation was a white Koji. Responsible for the production is the company Machida Shuzo, which has also been cultivating its own sugar cane since 2017. The Sato No Akebono Gold Shōchū has a recognizable, pale gold color, which it owes to a barrel maturation of three years in oak barrels! On paper without question a super exciting spirit, which I am really looking forward to taste! 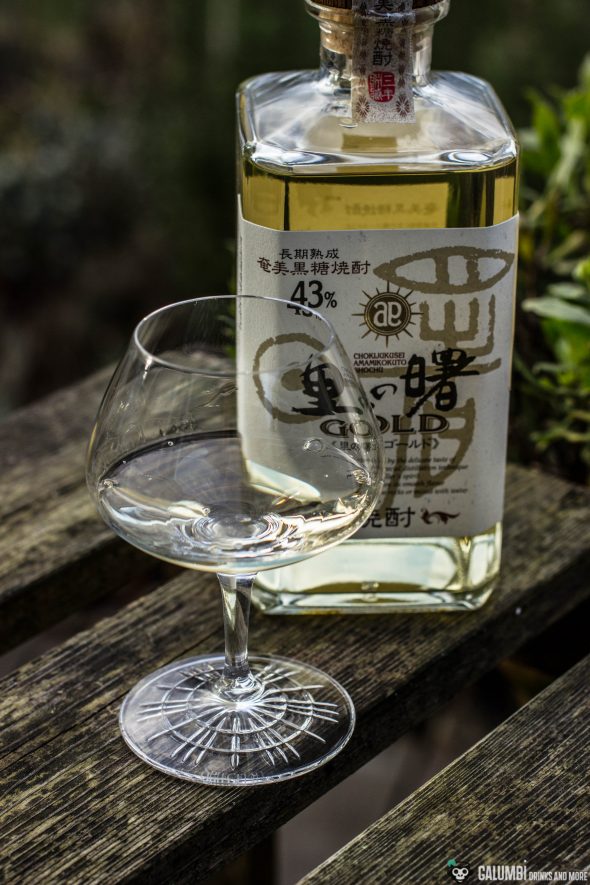 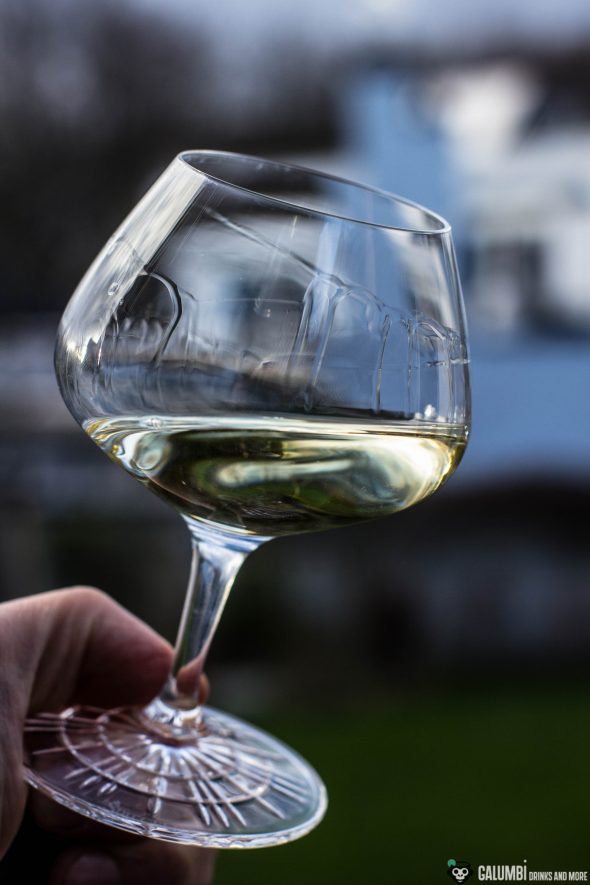 Aroma: A nice, light, floral-fruity aroma emanates from this Shōchū. I first have to think of light grapes and white peach, which is why associations of Peruvian pisco appear for a short time, but then disappear again. The main notes are earthy and sweet, a hint of mature cheese, subtle peppermint, icing sugar, elusive herbal tones and a little oak wood. Extremely interesting and in this combination completely new for me!

Taste: On the palate, the Sato No Akebono Gold Shōchū turns out surprisingly different than I expected. Right from the start, clear oak wood is present, which brings a good portion of spice nuances (cloves, nutmeg, an idea of cinnamon and brown sugar) with it. But also fruit tones of lemons, grapes, even some pear is present. A certain sweetness cannot be denied, there is no trace of mature cheese on the palate, but a fine vanilla in the background.

Finish: long, dry with spices, oak and some unripe peach

So, what can I say? I think the Sato No Akebono Gold Shōchū is really outstanding! This combination of aromas and taste components is – I mentioned it – new for me in this form and I am really enthusiastic about it! Especially the long finish is still present as I write these lines. And of course, at this moment I recognize first ideas what you could do with such a nice spirit behind the bar. In fact, I see possibilities here that are comparable to those of gin or pisco, due to the spicy and quite earthy note, but also with those of a Reposado Tequila. 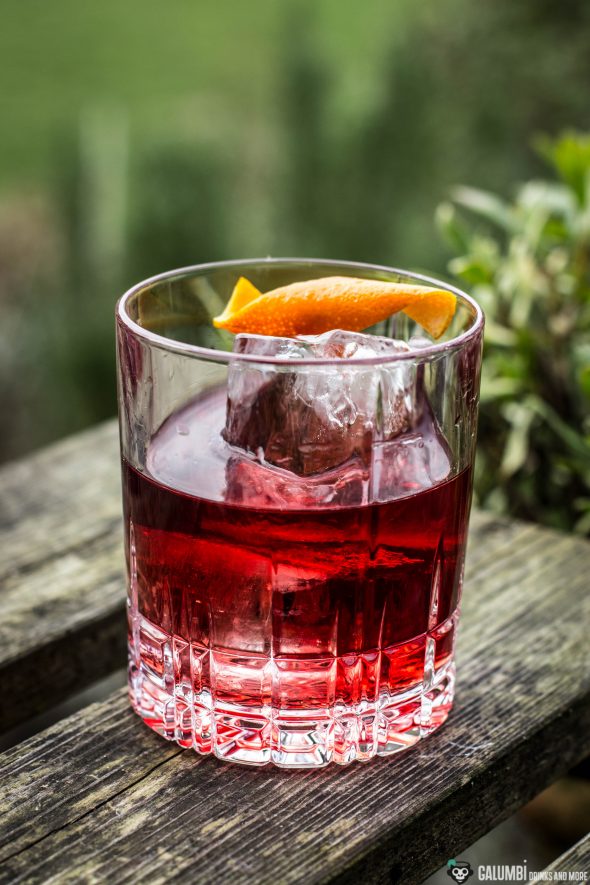 In the end, I went for two different drinks, which both come across as rather – quite in the Japanese sense – simple and elegant. On the one hand, there is a Negroni variant, which basically simply replaces the slightly raised gin part with the Sato No Akebono Gold Shōchū. The Negroni is and remains simply the non-plus-ultra of the bar world for me: it is easy to make, does not require a huge hodgepodge of ingredients, it is multi-layered, incredibly delicious, sophisticated and as a bitter aperitif simply unbeatable. Reason enough to offer the Sato No Akebono Gold Shōchū a stage in the Shōchū Negroni. And let me say in advance: it really plays this role wonderfully! As far as vermouth is concerned, I would go for a more “red wine”-heavy vermouth, for example the Vermouth Rosso de Mayo Giovannoni. 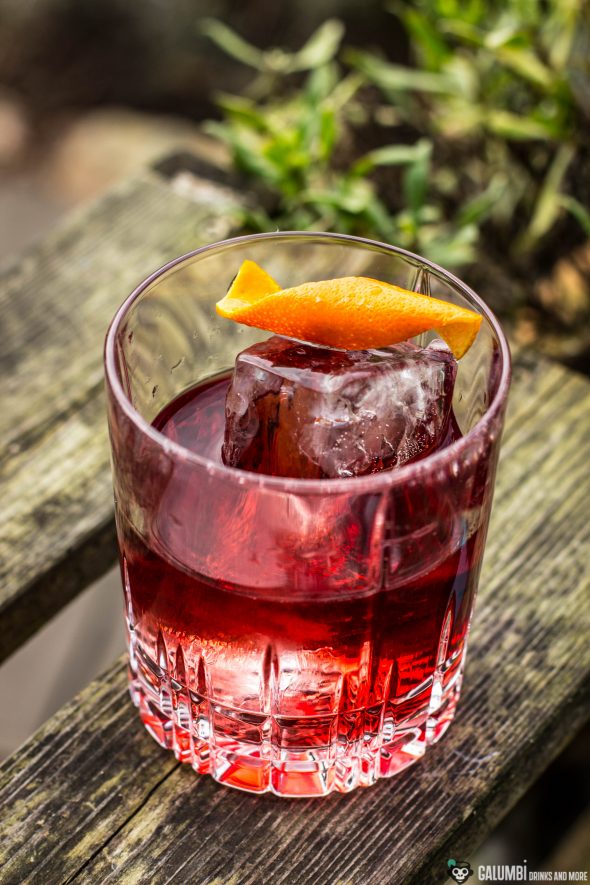 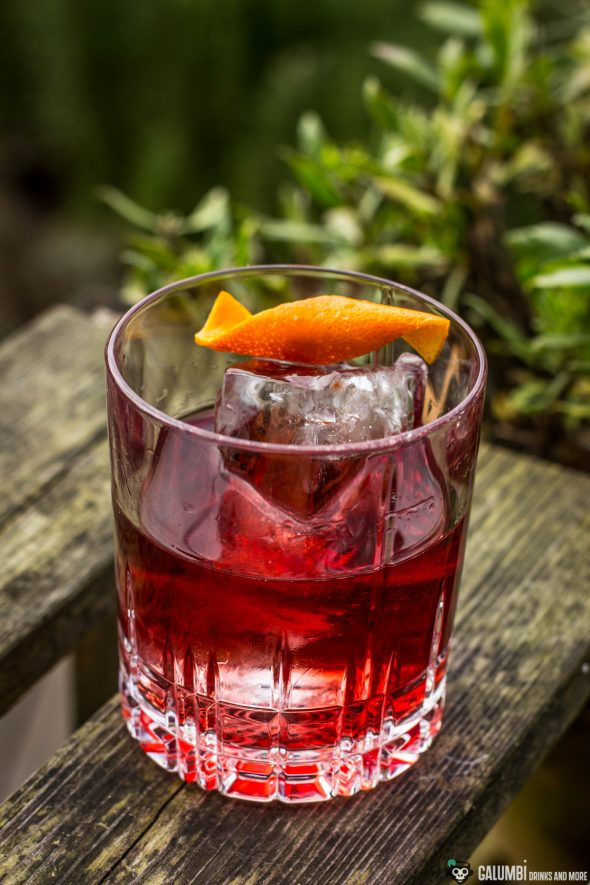 Preparation: The drink is built in the glass itself. Simply add all ingredients on solid ice cubes, stir briefly and spray with the oil of an orange zest, done.

The other drink is a little closer to what I would call my own creation, but also here I basically used a rather simple structure. It is a sparkling summer drink with a touch of spicy honey sweetness, in which the Sato No Akebono Gold Shōchū also plays the leading role. I would also use a rather dry, white-wine-heavy vermouth, e.g. the Werner Wermut RG White, as it underlines the nature of the cocktail much better. Instead of Supasawa, you can also use lemon juice, but in the end I decided to use Supasawa once again for optical reasons. The drink is named Amami Breeze. And again, no great bar equipment is needed, this drink is also made in a glass. Mixing glass and shaker just have a break today. 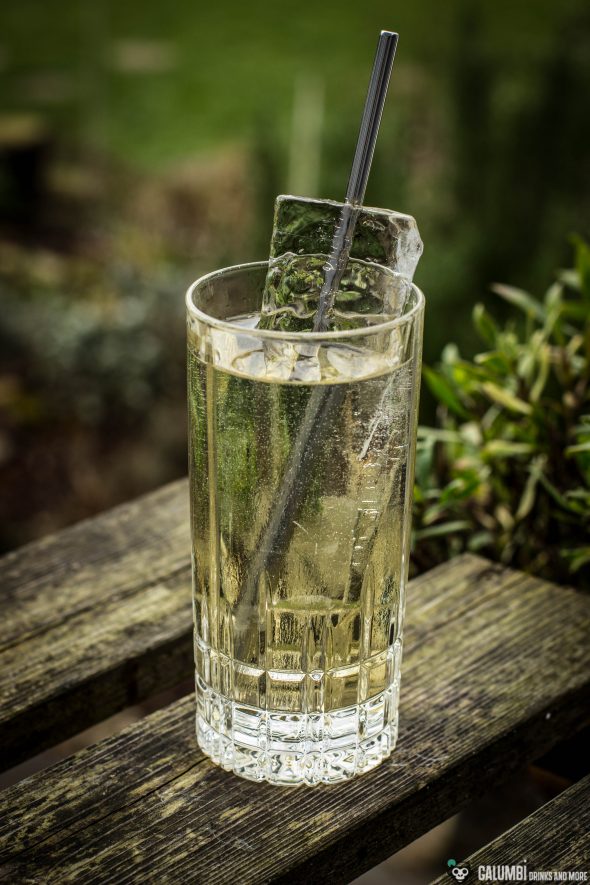 Preparation: Place all ingredients except the soda water in a glass filled with ice and stir a few times. Finally top with soda water.

Garnish: none (the use of a transparent ice wedge is enough here) 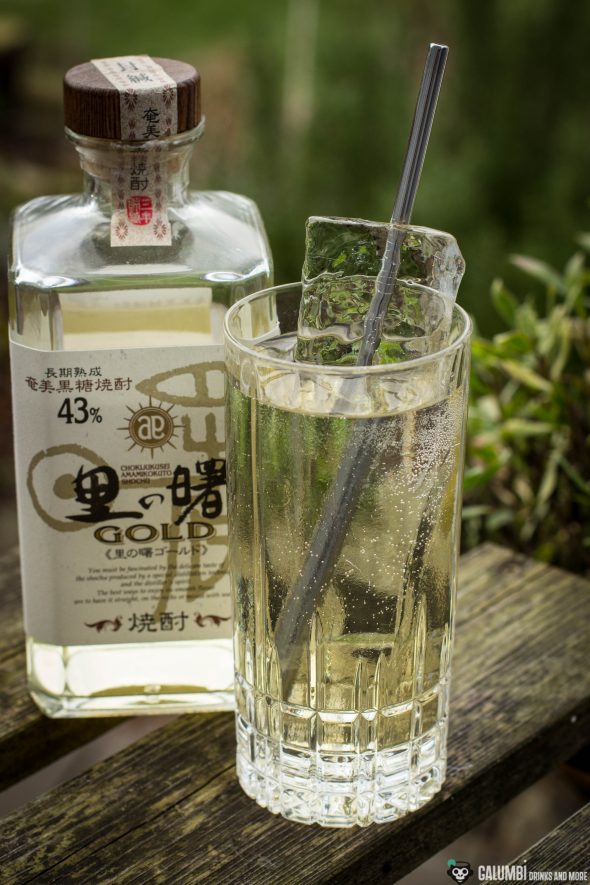 Buying sources: The Sato No Akebono Gold Shōchū can be purchased online at Ginza Berlin.