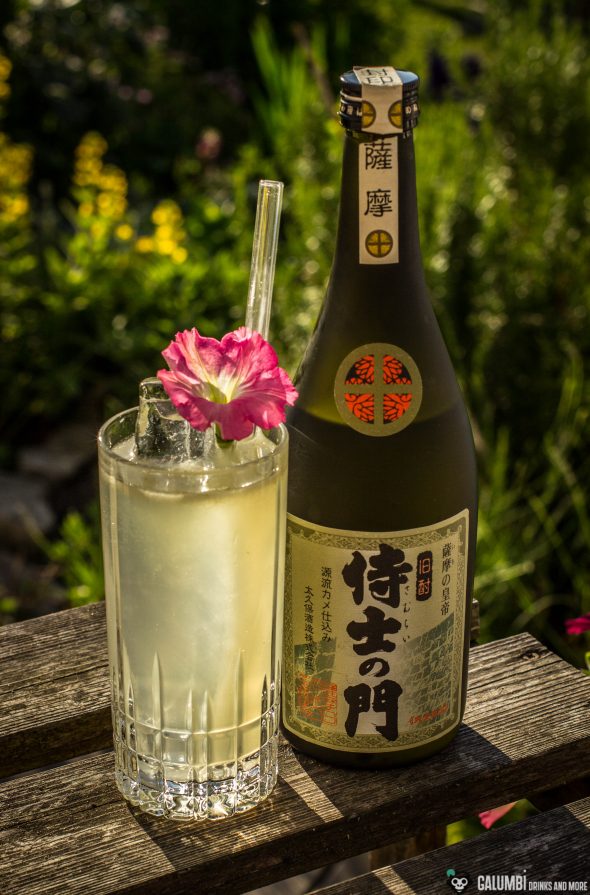 Today I am happy to be able to once again write about Japanese Shōchū. Already in March this year I published an article about a representative of this category of spirits and reviewed the Sato No Akebono Gold Shōchū, which I liked very much. In a Negroni, it is truly a poem! However, while the Sato No Akebono Gold is a sugar cane-Shōchū, today I am dealing with a Shōchū made of sweet potatoes. But that is by far not the only special thing! (provided test product)*

The sweet potato Shōchū (Imo) answers to the melodious name Samurai No Mon and comes in a very nice bottle made of dark glass with Washi paper labels. The packaging also features a katana, so that you get a bit of what you would expect in view of the name. As an avowed friend of the Japanese culture and history, I also took note of the symbol at the bottle neck, which I knew from a computer game. After researching that the Samurai No Mon Shōchū comes from the prefecture of Kagoshima on the island Kyūshū, I was (or am) quite sure to recognize the symbol of the old Shimazu noble family (島津氏), whose samurai played a major role in Japanese history and whose daimyat Satsuma was located in today’s Kagoshima prefecture. 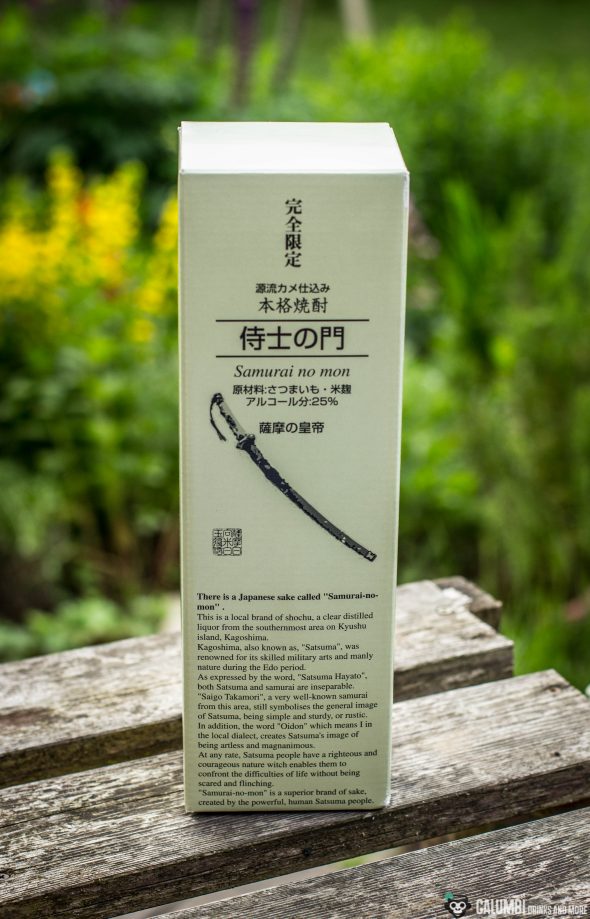 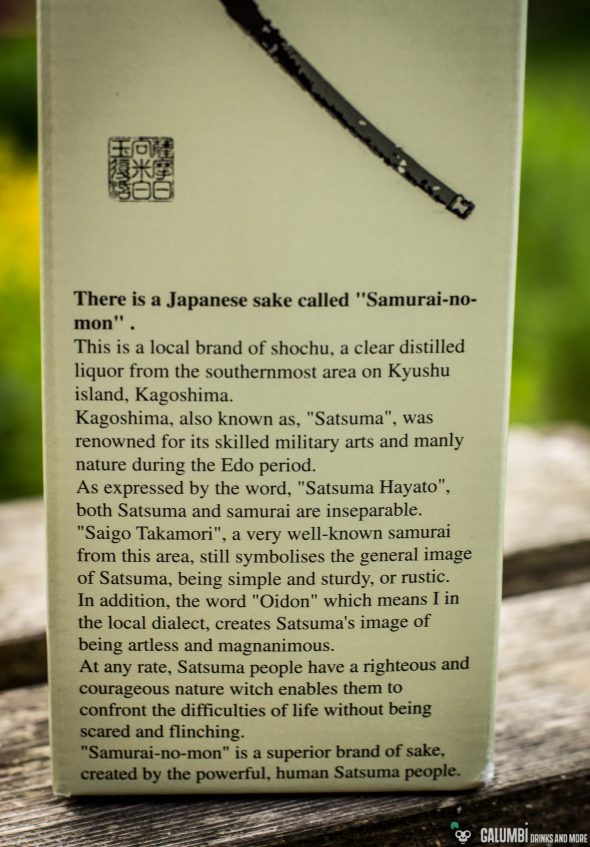 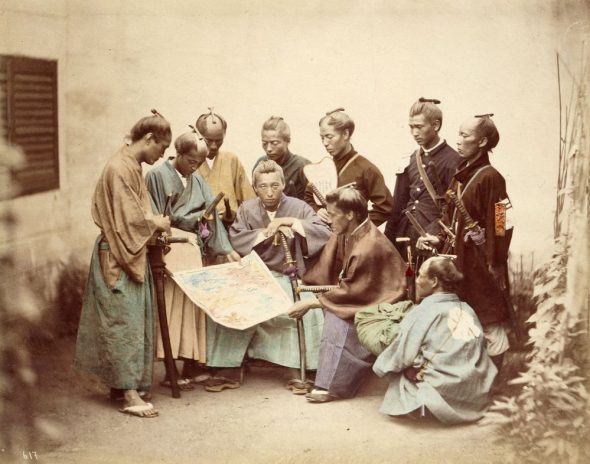 Be that as it may, the Shōchū comes from the smithy of Ookubo Shuzo, which was founded as Kubo Jozo in 1893. The sweet potatoes for the Shōchū are specially grown at the foot of the Mount Kirishima volcano, where volcanic soils provide good growing conditions. The production of this Shōchū is limited to 2500 bottles per year, which is not surprising considering that only 12 people at Ookubo Shuzo carry out all the production steps by hand. The Koji rice used for the production of the Samurai No Mon Shōchū is made from a rice variety that was only cultivated until the Meiji era (1868) and now – 160 years later – has been cultivated again. Another speciality is the black Koji, which is said to provide an intense umami taste. Finally, the Shōchū  is bottled at an abv of 25%. (For some background information on the production of Shōchū I would like to refer to the article on the Sato No Akebono Gold Shōchū also linked above). 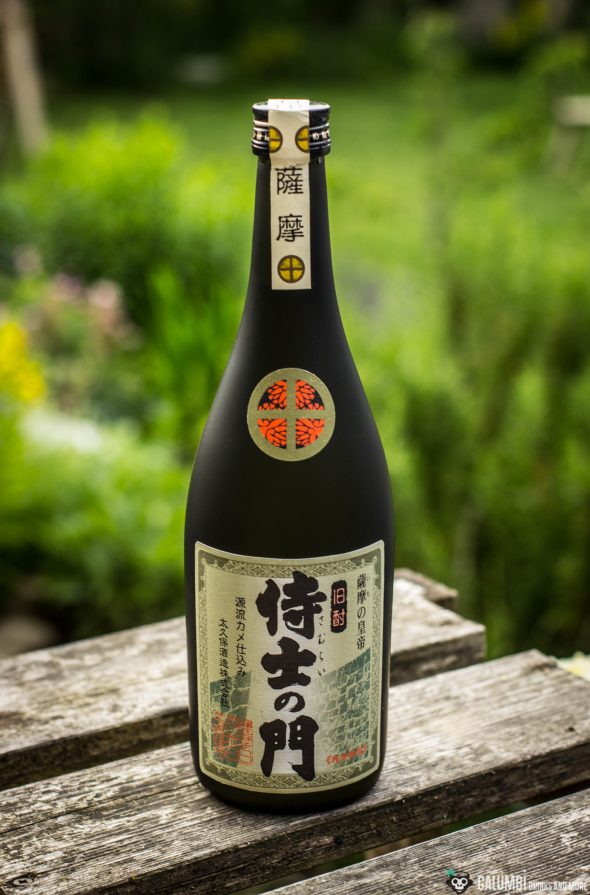 But now it is time to scent and taste it. 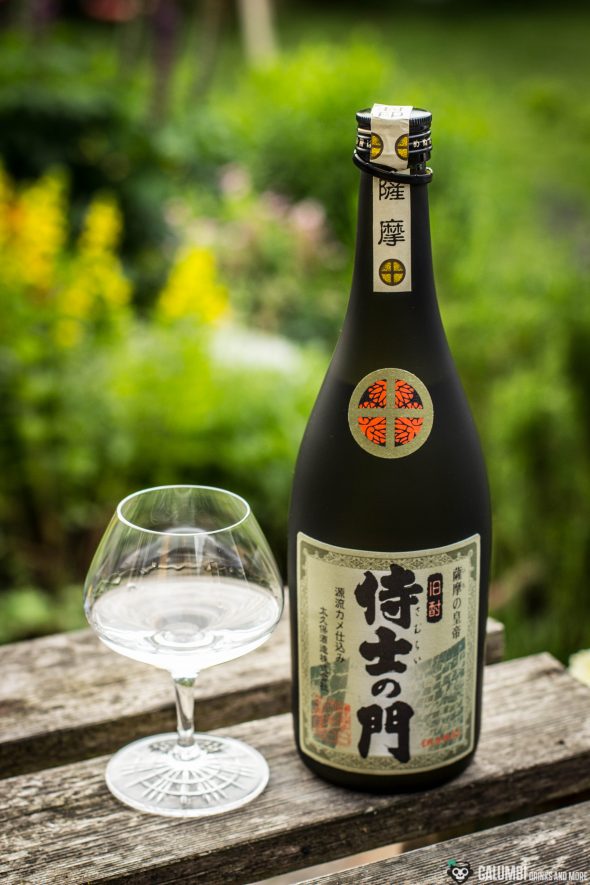 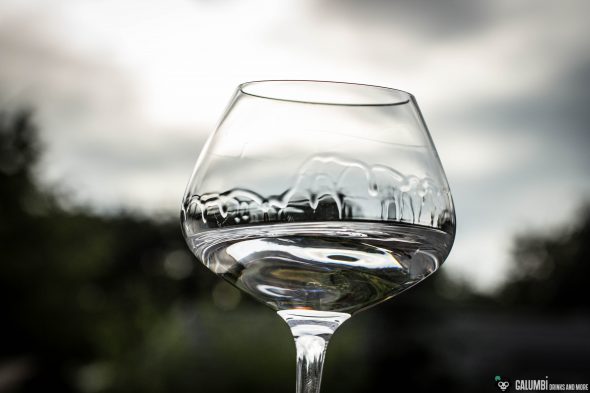 Aroma: On the nose there is a quite distinct aroma reminiscent of dry sherry, it turns out much more intense than other Shōchūs I have tasted so far and which were not made with the help of black koji. There are light, mineral notes that remind me of chalk, also earthy notes with associations of meadow mushrooms can be detected. A very fine note of sour bread dough and rock salt is also present.

Taste: on the palate I also notice slightly sweet notes of rock salt, subtle liquorice tones and again associations of sherry (most likely a Manzanilla), but much more powerful, which is also due to the 25% vol. And then they’re back: vegetal, mushroom notes with a distinct umami character that really shows to advantage.

Yes, this Shōchū is exciting and very different from the ones I have had in my glass so far. The possible applications are quite big, because it can be used similar to a gin or a dry manzanilla, maybe even as an interesting substitute for a vodka – also in a kind of Dirty Martini I could imagine this Shōchū to be excellent. Due to the high temperatures, however, I wanted to create a highball today, which gets a very special, spicy and unique touch from the Samurai No Mon Shōchū. To this end I shaked it with some lime juice, the Dwersteg Orange Liqueur (a kind of organic curacao based on wine distillate with bitter oranges) and 2 Dashes Bob’s Coriander Bitters on ice and finally put it into the highball glass and topped it with some ginger beer. The result is the “Shimazu Highball”, a sour-fresh, spicy, slightly hot Highball with the unique note of black koji Shōchū and a touch of coriander. 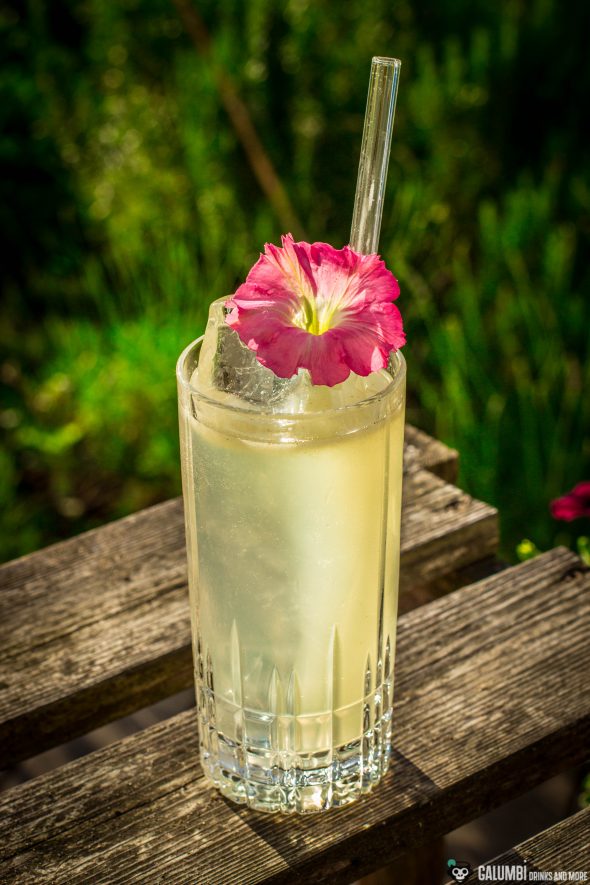 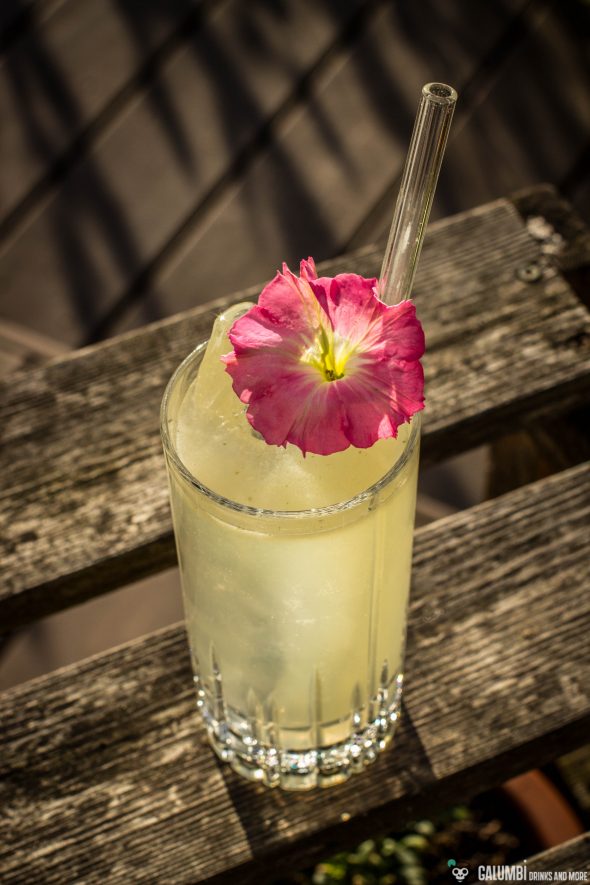 Preparation: First shake all ingredients except the ginger beer in a shaker on ice and strain into a pre-cooled glass on an ice spear. Top with ginger beer. 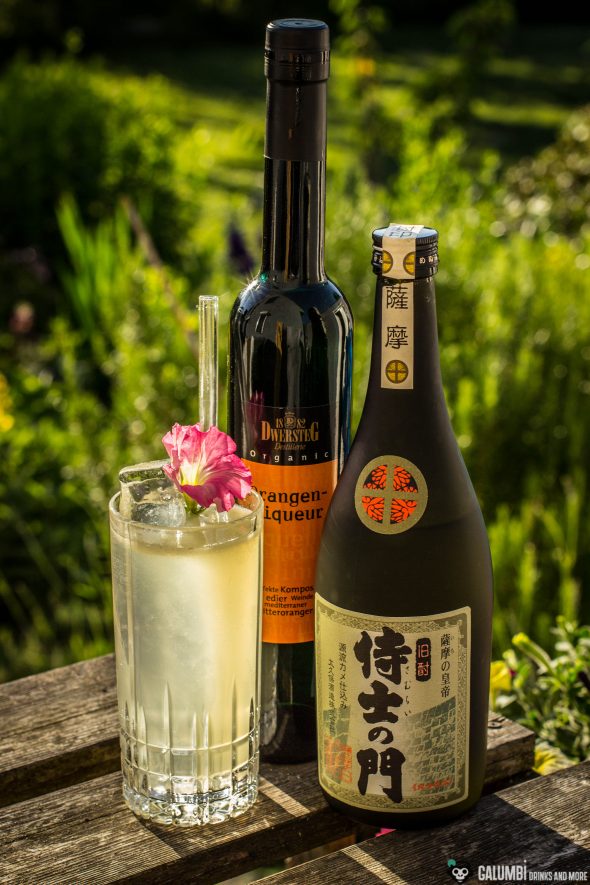 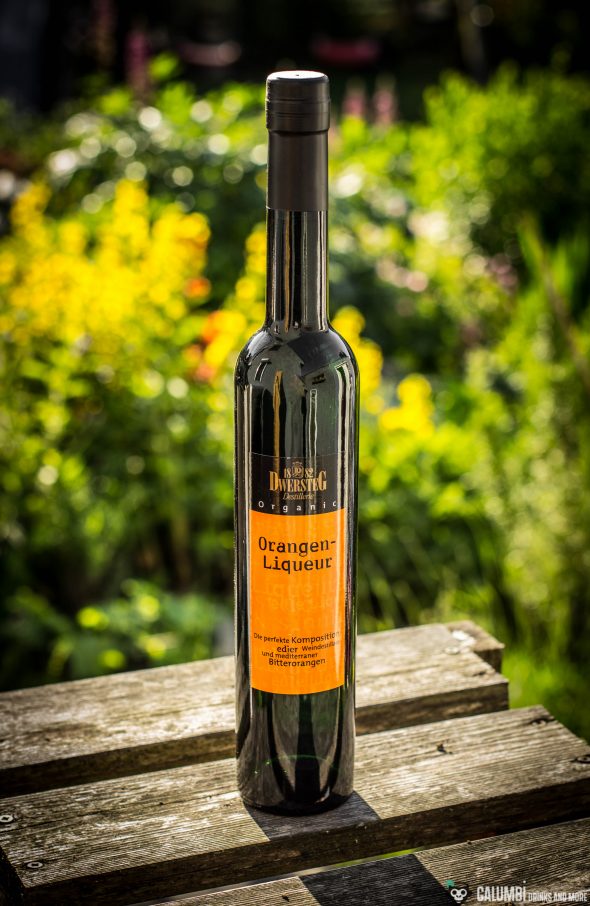 The Dwersteg Orangen-Liqueur is based on a wine distillate and made with bitter oranges.

Buying sources: You can buy the Samurai No Mon Shōchū from Ginza Berlin.