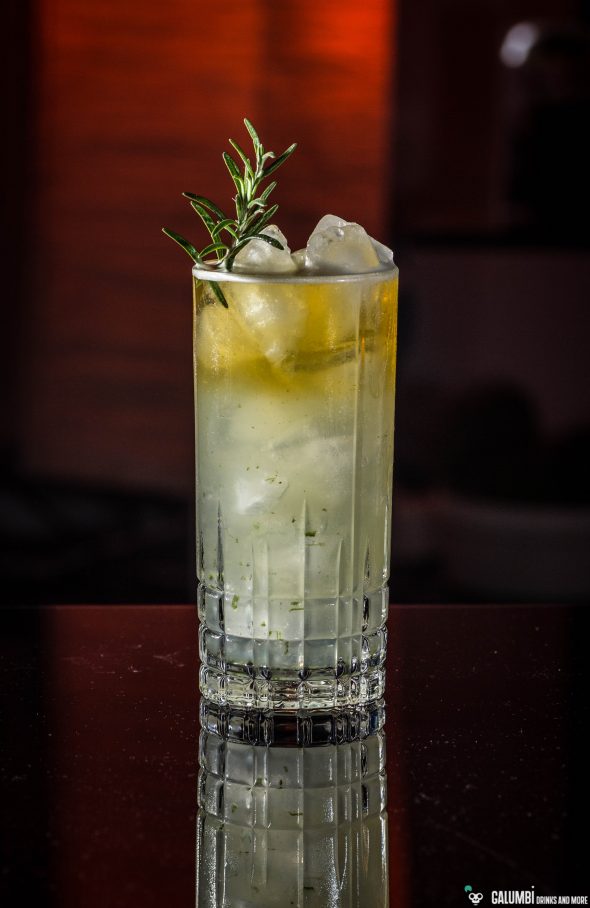 Today’s cocktail is a drink whose recipe is one of my own and its very strongly related to a vacation experience that happened last year. A crucial ingredient in order to realize this project is the Fichtensprossengeist (spruce shoots spirit) from Florian Faudes “Faude Feine Brände” which gives the cocktail a decisive twist in the desired direction. However I must warn you: It is certainly not a drink for everyone.

But first things first. The mentioned holiday experience occurred in the Dutch city of Groningen, where my father-in-law ordered an IPA in a very quaint pub called “De Pintelier” where they really had an impressive beer menu. To make sure I do not forget any details I have to say that my father-in-law previously had no significant contact with what is commonly called Craft Beer – like most people of his generation, especially here in the Ruhr Area where people love their Pilsener. Perhaps some of you will remember their own first impression while having such a strongly hopped beer like an IPA. Anyway, I do remember the reaction of my father-in-law still very clearly:

In his defense and as retrieval of his honor I have to note that in contrast to my expectations he spent the whole night with this type of beer and, although the initial enthusiasm was…let’s say rather moderate, he ordered a new IPA after he finished his glass. Unfortunately I do not exactly remember which IPA it has been but while I was primarily focused on the fruity-tart grapefruit tones in the foreground I was quite intrigued by his first association of pine cones. But it finally gave me the idea for a drink with IPA which should try to emphasize these aromas: pine cones, wood and tart freshness.

I did not have to think twice and opted for a generously interpreted variant of the Tom Collins. Instead of soda I chose an IPA and alongside the gin I added some Faude Feine Brände spruce shoots spirit. Furthermore I decided to use a gin that is not stingy with the juniper but also does not make free with it. The recently introduced Breaks Gin was a good choice here. One of the main difficulties in composing this cocktail was not to overdo the forest and pine thing because otherwise it would become a drink no one wants to drink anymore. But on the other hand it should unmistakably stay true to this ambition. So I added a homemade rosemary syrup (unfortunately some pieces of rosemary made it into the drink as you might see in the picture. I will go for a double strain here in the future). The syrup is not made too intense, but it bestows that certain something upon the drink. However, the balance of lemon juice and sugar makes the drink quite fresh and tangy and the IPA really works great in the cocktail. I have used a Hopfmeister Roadtrip IPA.

So there still was the issue with the name. The modification of the classic Tom Collins is definitely big enough to give the drink a unique name. I did not have to think long about it and so I simply named the cocktail named after the trivial statement that describes both its taste and its story of origin: Schmeckt ja wie ein Tannenzapfen! (It tastes just like a pinecone). 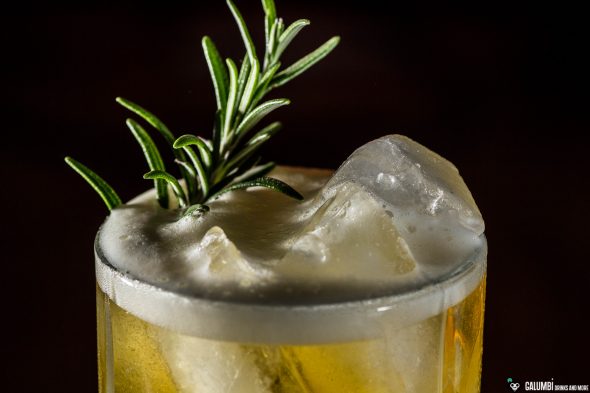 Rosemary syrup: add the needles of 6 sprigs of rosemary to 600 ml of water and 600 g sugar. Bring everything to the boil and let it simmer for about 10 minutes over low heat. Then strain through a fine sieve into a sterilized bottle.

Preparation: Shake all ingredients except for the IPA on ice in a shaker. Then strain into an ice-filled glass and top with IPA.

Garnish: a sprig of rosemary (Of course you can also place a pine cone next to the glass but I would definitely refrain from adding the cone on top of the drink.)