If you are concerned about the world and the history of (Caribbean) rums, there is, of course, no way around certain countries respectively islands. Cuba, Barbados, Trinidad and the Virgin Islands are among them, but of course there is also the island state of Jamaica. And whoever thinks of Jamaican rum very likely also thinks of Appleton Estate. While Jamaica is mainly associated with the particularly strong, intensive “High Ester” rums, it is all the more surprising that the (supposedly) most famous brand name of Jamaican rums has so little in common with the famous characteristics of a Jamaican rum. (provided test product)

As the oldest distillery in Jamaica, the history of the Appleton Estate distillery is a long and changing one. Rum production goes back to the year of 1749 which is without question quite a long period of time. The beginnings of Appleton Estate even date back further in history to the year of 1655, the year in which Great Britain replaced the Spaniards as the “owning” colonial power. The history of the brand is also intertwined with changing owners. It was bought by the Jamaican rum company J. Wray & Nephew Ltd. Appleton Estate (and that name is still written on the packaging), but later it was purchased by the Jamaican company group Lascelles deMercado, which again was bought by the subsequently socialized CL Financial group from Trinidad and Tobago until today’s owner, Gruppo Campari, bought J. Wray / Nephew and with that the brand of Appleton Estate.

The Appleton Estate is located in the Nassau Valley in Cockpit Country in central North-West Jamaica. The region boasts about a particularly fertile soil and is therefore an ideal terroir for the sugar cane from which the molasses for the rum is finally produced (I use the term “terroir”, although it is a subject to some discussions whether there is such a thing as terroir in the production of rum – the idea of terroir and rum is also explicitly taken up by other manufacturers. You can find some information on that in my article about two Rums from the Plantation Vintage Edition). Master Blender of the distillery is Joy Spence and the people at Appleton Estate are very proud about the fact that Joy Spence is the first woman ever entitled a master blender. The rums are allowed to mature in barrels of American white oak, how long depends on the specific rum.

And that’s the point where I will try to focus on the actual bottle I am reviewing today: the Appleton Estate Rare Blend Aged 12 Years. This rum – you may have guessed it – was allowed to mature for at least 12 years in the barrels I have mentioned above. Although there is no general guarantee for the validity of age statements on rum bottles, Jamaican rums are reliable in this respect and offer the same transparence that also Bourbon, Scotch and Co offer: 12 years on the label mean that the youngest (! ) drops in this bottle are at least 12 years old. So a good portion of the Appleton Estate’s Rare Blend 12 Year Old may also be older than these 12 years. The rum is labeled “Premium Aged Golden Rum” which is also in accordance with the color although other rums would maybe call this a “dark” rum. The color thing is a little bit confusing when it comes to rum. What a “Golden Rum” is, is not regulated. Just as “White Rums” are not necessarily unmatured rums, the question, what actually a “Golden Rum” is, depends on yourself or on the manufacturer. Since rums may be colored in most of the rum producing countries, it makes the whole thing even less reliable. Today’s 12-year-old Appelton Estate rum was also colored with a little caramel color, but only to ensure a uniform appearance. In fact, we can believe this since a minimum maturation of 12 years will bring some color with it. 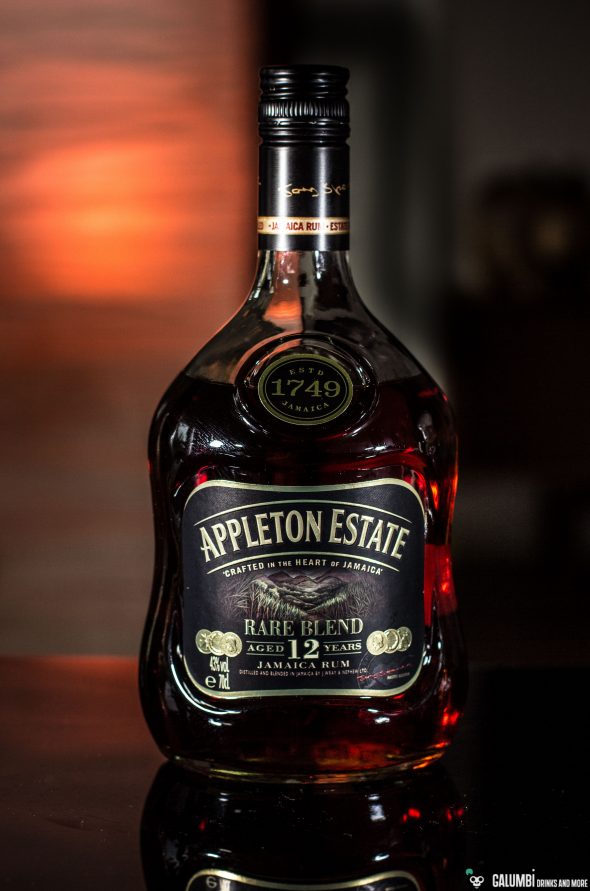 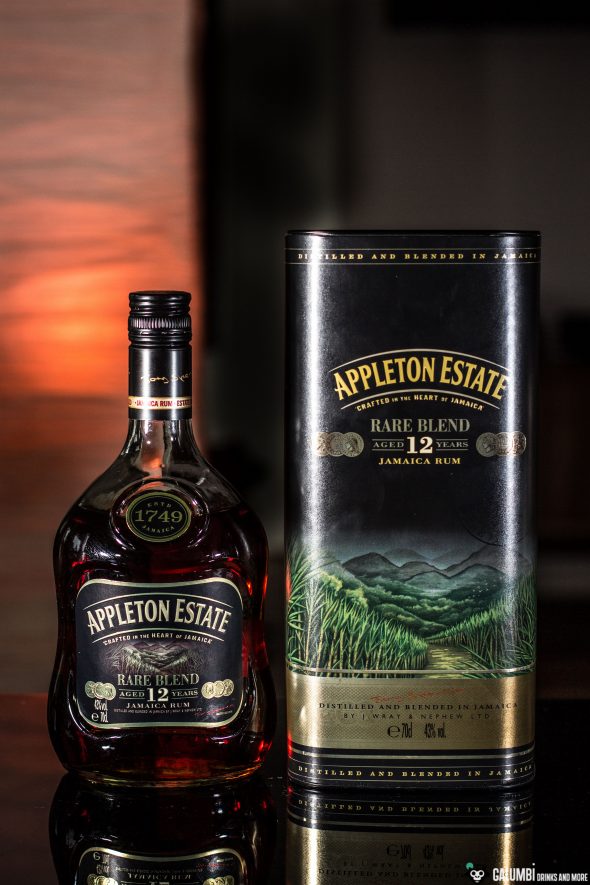 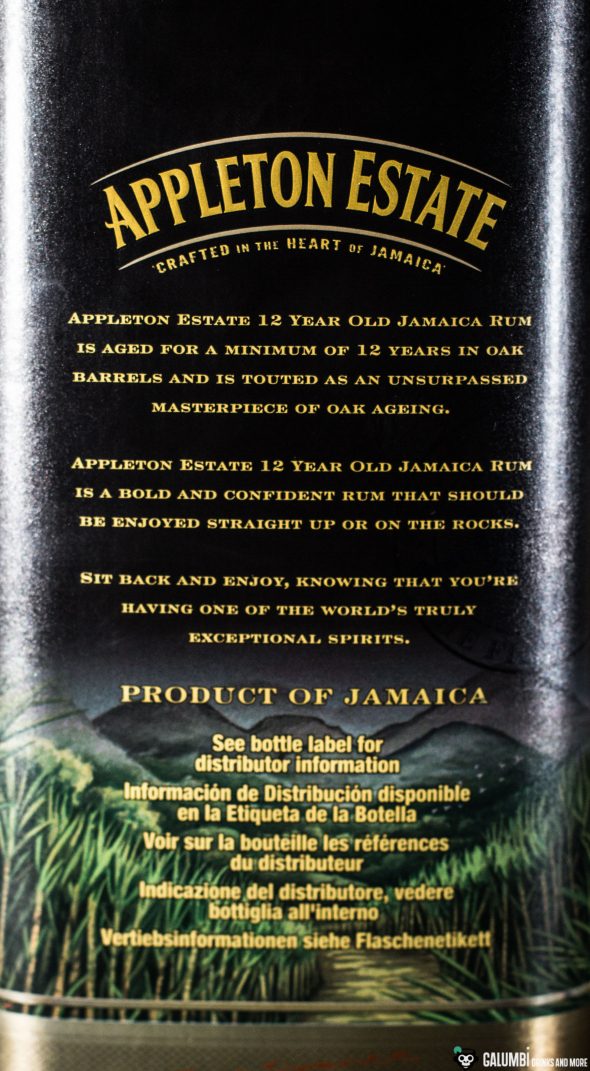 What I also really like is the packaging and the bottle itself, which definitely underline the premium aspiration of the product. Especially in the rum segment, I do often see bottles where the design is definitely worth improving, but here we’re dealing with a finely shaped and conspicuous bottle. But, of course, the outward appearance is not what finally counts. And although the manufacturer explicitly mentions that the rum should be enjoyed “straight up” or “on the rocks”, I have also used the Appleton Estate Rare Blend Aged 12 Years in a cocktail. It is a variant of a Rum Old Fashioned. But first let’s have a look at the Tasting Notes for the mere rum. 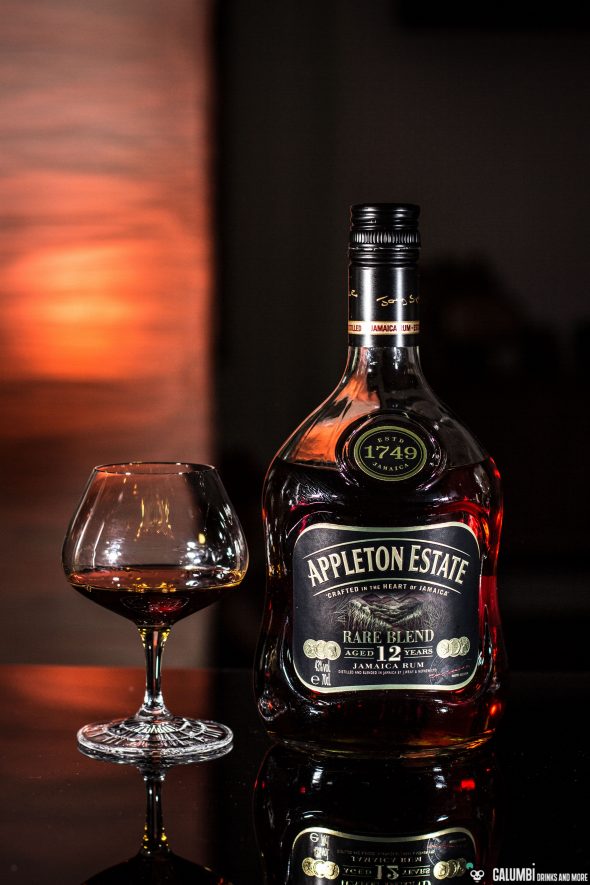 Aroma: First of all, as I already pointed out at the beginning of this article: the Appleton Estate 12 Years is definitely not a fruity ester bomb like many other Jamaican rums. Although I can find some pineapple and orange, first and foremost there are associations of brown sugar, a little chocolate and oak that characterize this rum. Over time, some coffee and caramel came through. Personally I like it very much, despite it does not match the cliché of Jamaican rum.

Taste: On the palate, I can find milk chocolate, some coconut water, molasses, only subtle but very delicate fruit tones, oak and a quite full-bodied spicy flavor (cinnamon, nutmeg).

Finish: vanilla, oak and a long lasting, dark coffee. A great rum, without any doubt!

Many Rum Old Fashioneds pay a lot of attention to the dark fruit tones of the rum. Hence, you can find orange bitters, the oil of an orange zest and the like very often. This time I wanted to accentuate a little differently and decided to use a combination of a little high-quality coffee, Pedro Ximenez Sherry, a little bit of crème de cacao, The Bitter Truth Spiced Chocolate Bitters and some white chocolate espuma on top of it. It looks marvelous and it tastes almost divine. And I guess that also every lover of a White Russian will most likely enjoy this one. 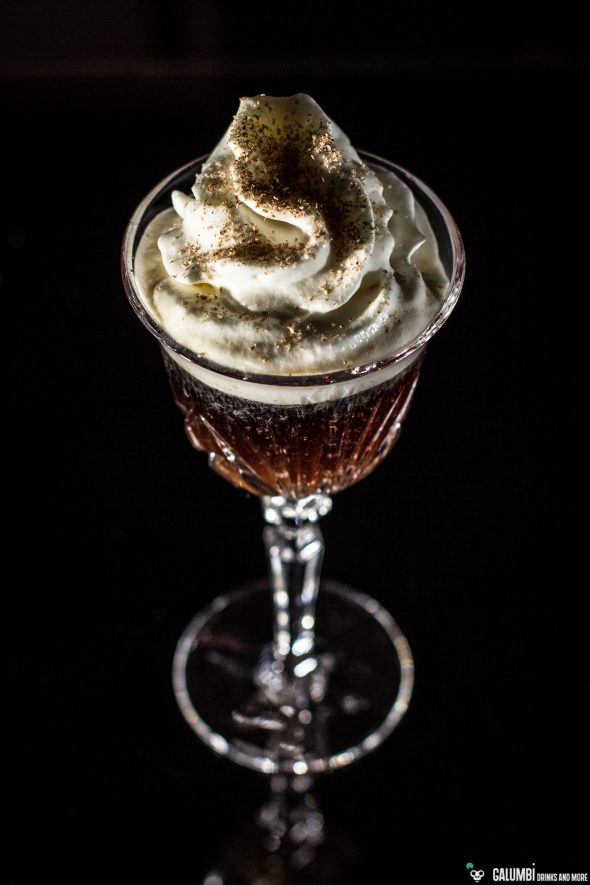 White Chocolate Espuma: When using a 250ml cream siphon, heat 180 ml of milk together with about 160 g of white chocolate and one halved vanilla pod in a pan but don’t let it boil or burn. When the chocolate has melted, pour into your cream siphon through a fine sieve and allow to cool in the refrigerator. Charge with two cartridges and shake well before using.

Preparation: Add all ingredients except White Chocolate Espuma to a mixing glass filled with ice cubes and stir until cold. Finally, top with white chocolate espuma and grate some nutmeg on top of it. 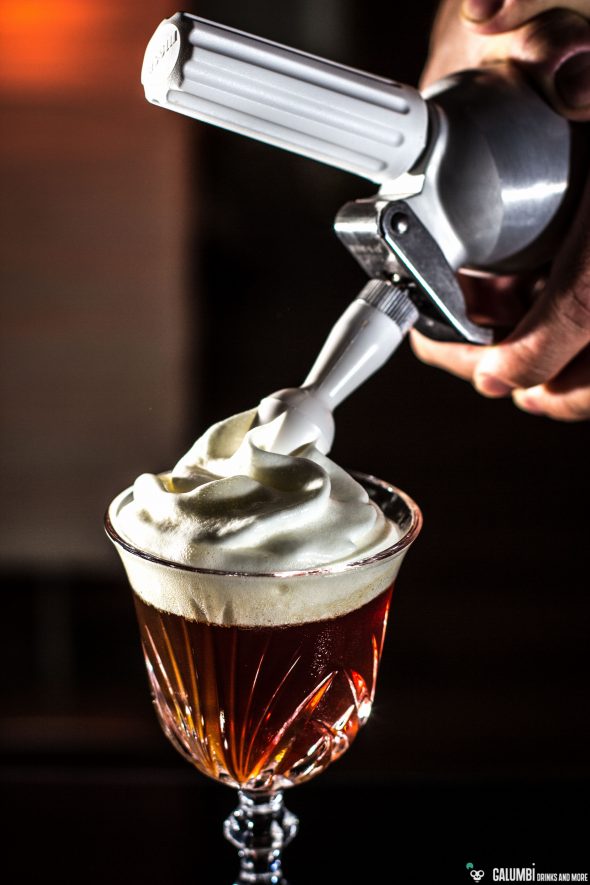 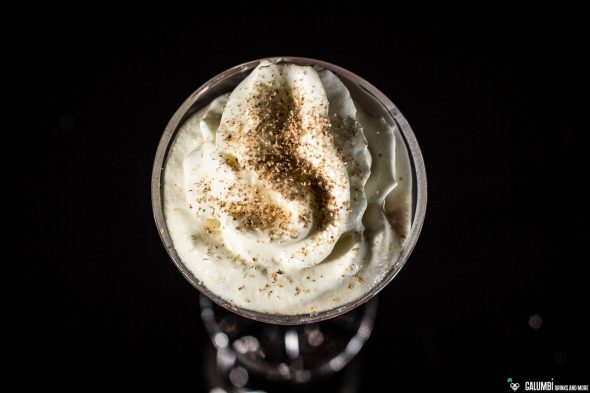 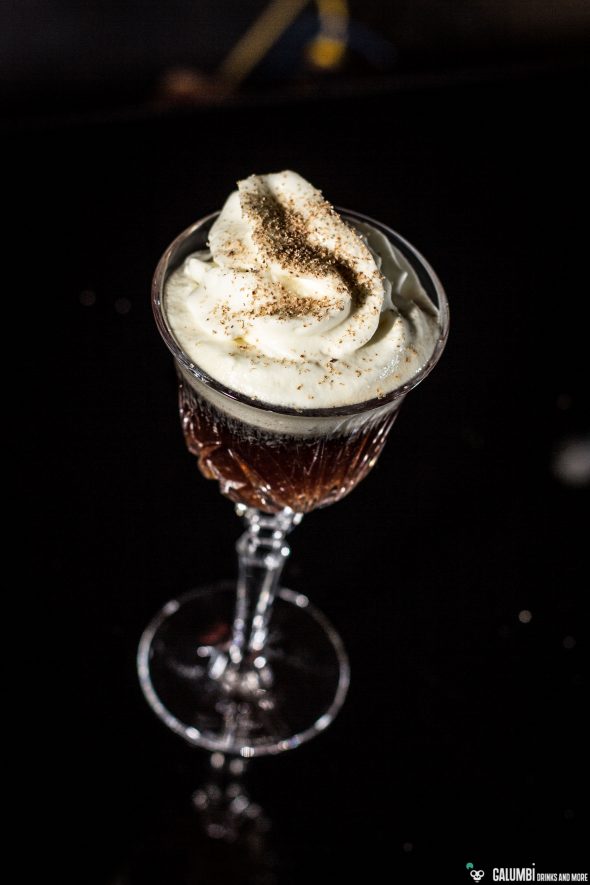