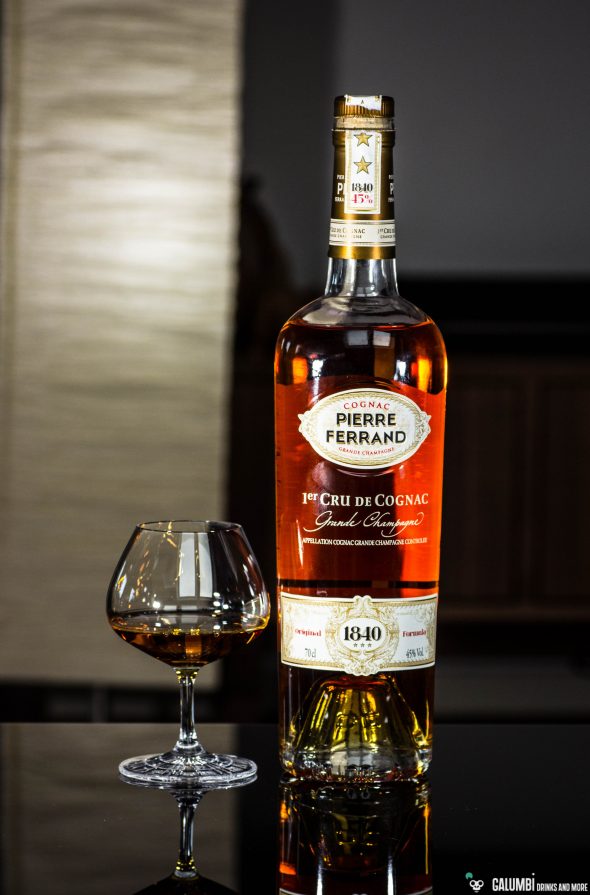 I would like to finally welcome the new year of 2017 here on the blog with an article about a special product, which also is the first of its kind that I am reviewing here: I’m talking about the Pierre Ferrand Cognac 1840 Original Formula – the first Cognac to be reviewed on Galumbi – Drinks & More. Today, Cognac enjoys an ambivalent reputation. For some, it is a slightly outdated spirit of past days, for others a still appreciated barrel-matured spirit for quiet moments at the fireplace and for others it’s a high-priced prestige object sold in stylish bottles which can easily compete with those of the perfume industry.

The 1840 Original Formula definitely does not belong to the latter category. Rather it is directly connected with the focus of my blog: cocktails. But before I go closer on that, perhaps I should at least briefly explain what a Cognac actually is. Without wanting to go into all the subtleties of the cognac production (for a single blog article this might be way too ambitious), it should be pointed out – first of all – that it is, like for instance whisk(e)y, a barrel-aged spirit. However, it is not made from malted barley, corn or other grains, but from French white wines from the surrounding areas of the city of Cognac (there are six sub-regions in numeric order that produce cognac called “Crus”). It is therefore a geographically limited spirit with a protected designation of origin. As with many other spirituous creations, the duration of the maturation process is decisive for the final designation. The “youngest” category is the VS Cognac (“very special”) respectively the *** (three stars)-Cognac. In order to be sold as ***/VS-Cognac, the youngest cognac contained in a bottle must be aged for at least two years (similar to other spirits such as whisk(e)y, the cognac in a bottle is usually not taken from a single but from different casks of different age).

If you are a bit concerned with the history of bars and cocktails, you will be aware that Cognac has been a standard spirit in the 19th century (besides whiskey, of course) and numerous cocktail recipes calling for cognac exist from this time. Of course, hardly anyone had the money to pour an expensive and particularly old cognac into a cocktail which was why the classic *** – cognacs prevailed as an ingredient. Legally, VS and ***-cognacs are the same, to avoid any misunderstandings. Anyway, the general trend since the earlier days has more or less led to an alcoholic drinking strength of 40% ABV in most ***-Cognacs. 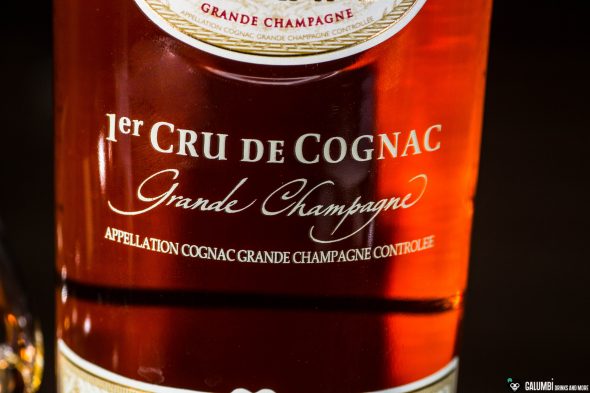 Now the Pierre Ferrand Cognac 1840 Original Formula was now designed by Ferrand in order to revive the old-fashioned cocktail cognacs. The Cognac should therefore be affordable (with about 30 € for a bottle it certainly is), offer a slightly higher ABV (that is also fulfilled with an ABV of 45%) and it should still be aromatic with a darker color from the barrels. The latter is reached by house Ferrand by using a Cuvee of about 10 years old cognacs for almost 85% of the final Cognac 1840 Original Formula and 15% very old cognacs. The cognac comes from the Grande Champagne, which is the first cognac region (hence the designation “1er Cru de Cognac” on the bottle). The production process was preceded by an extensive research and “tasting” phase, in which Ferrand owner Alexandre Gabriel and cellarman Christian Guerin tasted various ***-cognacs together with the well-known cocktail historian David Wondrich. Some of these ***-cognacs dated back to the 19th century. The design of the bottle of the Pierre Ferrand Cognac 1840 Original Formula is also based on such an old Cognac bottle (a Pinet Castillon Cognac from 1840, hence the name – a little deliberately misleading because of course the Pierre Ferrand Cognac 1840 Original Formula is not available since 1840 in this form but only based on a cognac of this year).

Although it is explicitly a cognac intended for usage as a cocktail ingredient, today I’m going to review it neat. 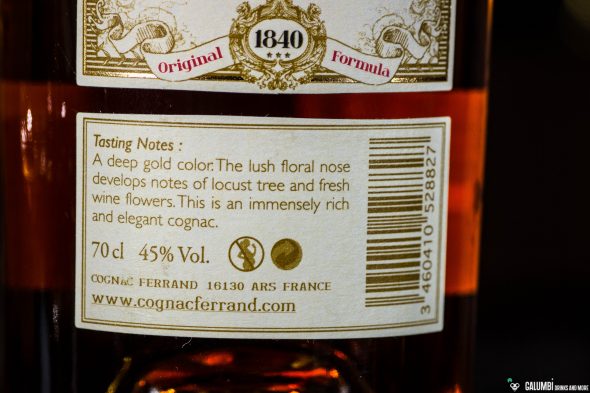 Aroma: If you are not regularly tasting cognacs (like me), you will inevitably notice the aromatic proximity to whisky that a cognac can offer. But, of course, it is definitely different: in fact it has very beautiful, floral tones. Bright fruits and fortified white wines can be noticed alongside a very special scent. I cannot really say whether this is the locust tree described in the official tasting notes. Locust trees definitely do not belong to my actively accessible odor-associations. The longer I scent, the farther the Pierre Ferrand Cognac 1840 Original Formula moves from my initial whisky association and develops a very distinct, very beautiful flavor image. Fine honey, quince, wine blossoms, a little Christmas spice and subtle oak notes. Despite its determination as a cocktail ingredient it also it a very nice spirit for having it neat. Maybe it has just been too long since I last had a cognac in my glass and I’m once again noticing that I am definitely affectionate to cognacs.

Taste: The Pierre Ferrand Cognac 1840 Original Formula is also really nice and pleasant on the palate, despite its 45% ABV. It is mild and balanced, immediately a nice sweetness of honey emerges, bright liqueur wines and a fine vanilla are also there. Again bright fruits, fine hints of spice (cinnamon, nutmeg) and aromatic oak are undeniable. Very beautiful! 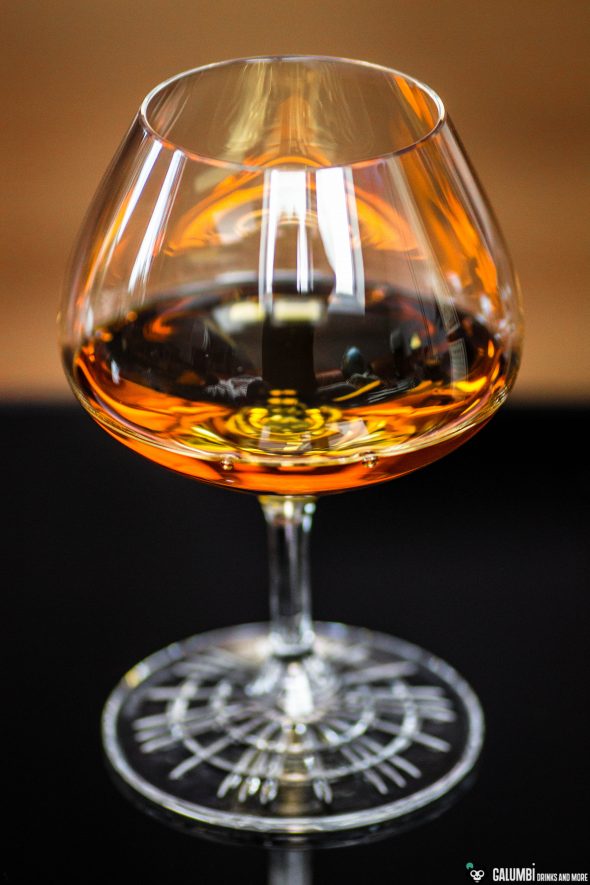 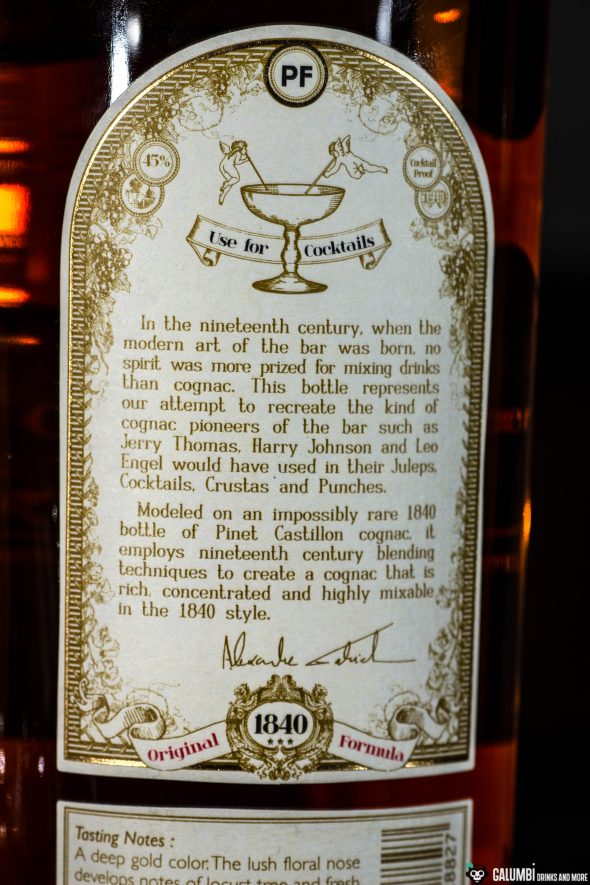