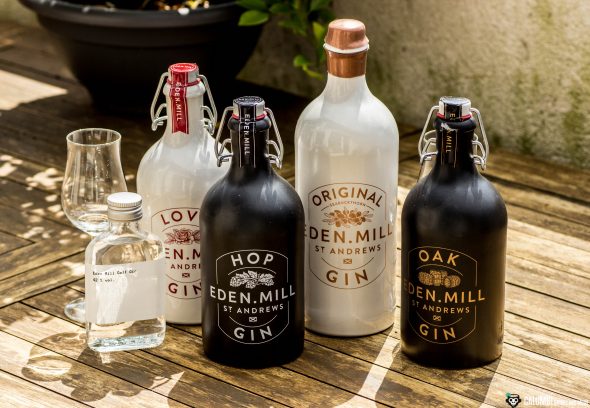 Spirits and the countryside of Scotland seem to have a close relationship. Most people will certainly think of whisky, the many neat distilleries covering the picturesque landscape of the country, barley fields and clear rivers. But of course many connoisseurs know that Scotland has more to offer than just the “water of life”. Above all I’m thinking of the trendy spirit of our day: gin.

Whether it’s a renowned bottling as the Botanist from Islay’s Bruichladdich distillery or a less known one such as the Caorunn, Scottish distilleries recently have become quite experimental and diversified. And it is especially the Eden Mill distillery that once again stands out with its broad portfolio. As I have already described in connection with the Eden Mill Love Gin, this place is distillery and brewery in one. That of course provides some interesting benefits that can generate very promising synergies. But also the surrounding countryside to the coastal town of St. Andrews holds many ideas for innovating the distillery’s products. While I already wrote about the Love Gin being far from the default category with its combination of rhubarb, rose petals and Goji berries, I would also like to have a closer look on the other bottlings from the series.

Besides the Eden Mill Original Gin these also include the Oak Gin, the Hop Gin and more recently the Golf Gin 2016.

Of course the names of the bottlings already tell us something about their character, but I want to gradually introduce them here and say something in particular about each gin. And of course I am very excited about the appertaining tasting. 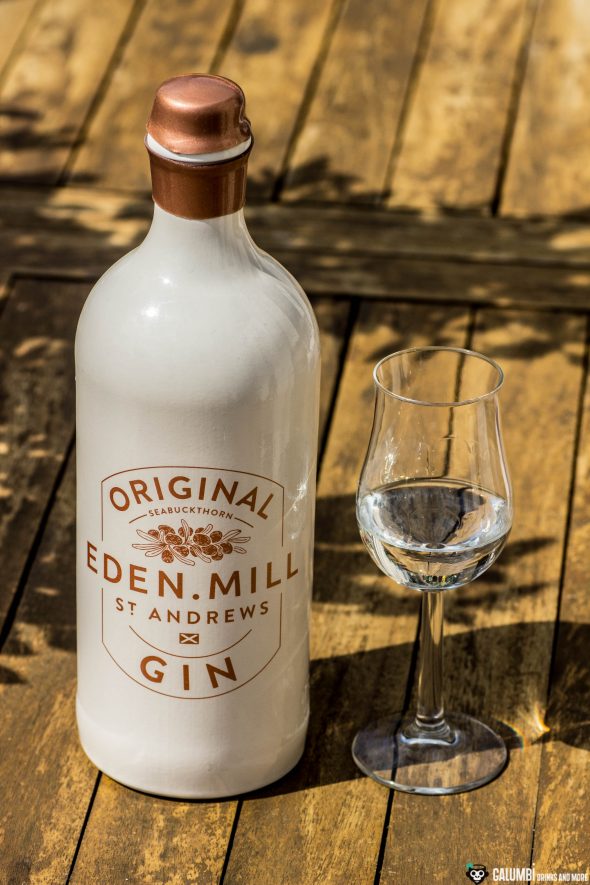 Ok, first I want to start with the standard bottling from the Eden Mill’s gin segment, although of course also this bottling has its unique traits. Here we’ll find a highly unusual Botanical placed in the foreground alongside the juniper. It is seabuckthorn, more specifically seabuckthorn berries from the county of Fife where also the town of St. Andrews with the Eden Mill distillery is located. Personally, I like the smell and the taste of seabuckthorn very much – whether in perfumes or desserts. Buckthorn berries are also known for their high content of vitamin C, though inside of gin this is certainly no important trait.  Besides sea buckthorn there is also lemon peel, lemon balm and angelica. The latter is very commonly used in gins and can therefore often be found on the labels of gin bottles. The Eden Mill Original Gin comes with 42% vol. and costs about 30 € (0.7l bottle). 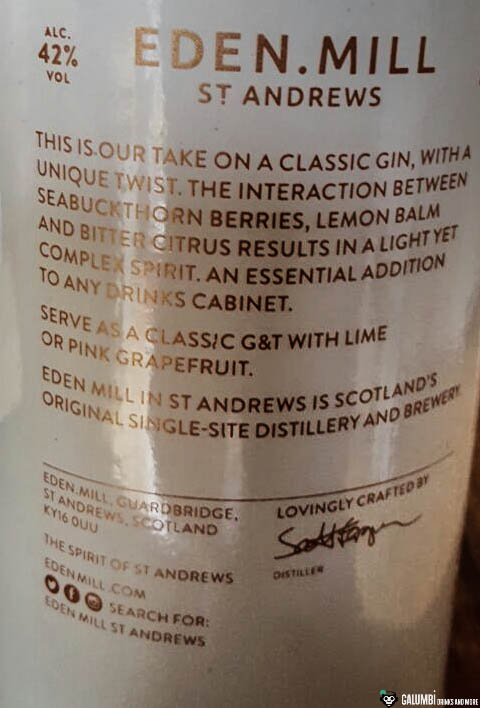 Aroma: The juniper tones are less distinctive and strong than I expected. Nonetheless somewhat stronger compared to the Love Gin, but with rich citrus notes. I cannot isolate the lemon balm, though, but probably some subtle licorice.

Taste: Juniper, indeed there are green peppercorns and some lychee. Again there’s citrus, but less intense than on the nose. There is a velvety imagination of sea buckthorn but unfortunately it remains a little too passive for my taste, I would definitely have liked a little more.

Finish: medium-long and fresh with orange 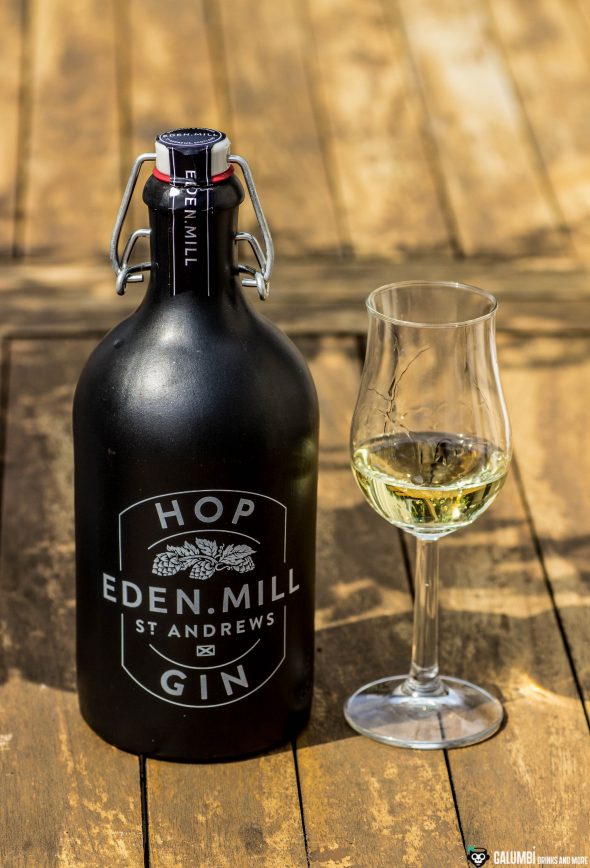 I initially spoke about promising synergies in the Eden Mill distillery and this was not just an empty phrase. The wide range of products is reflected in the Eden Mill Hop Gin which bears its name because – guess what! – it’s made with hops. And of course you’re think right if your impression here is beer. The Eden Mill distillery is finally also a brewery and of course they also like to create very intense hop beers, especially the Shipwreck I.P.A. The hop used inside of the Hop Gin is the Australian Galaxy hop, a very intense typ of hop which is primarily known for its aromas of passion fruit and citrus. In this respect I was very excited about the role that it would play as an ingredient in a gin. In addition to hops and the classic juniper, the distillery reveals the addition of coriander and angelica. The Hop Gin is somewhat stronger than the Original Gin and comes with 46% vol. It is slightly more expensive than the Original Gin, so you have to spend about 28 euros for a smaller 0.5-liter bottle. 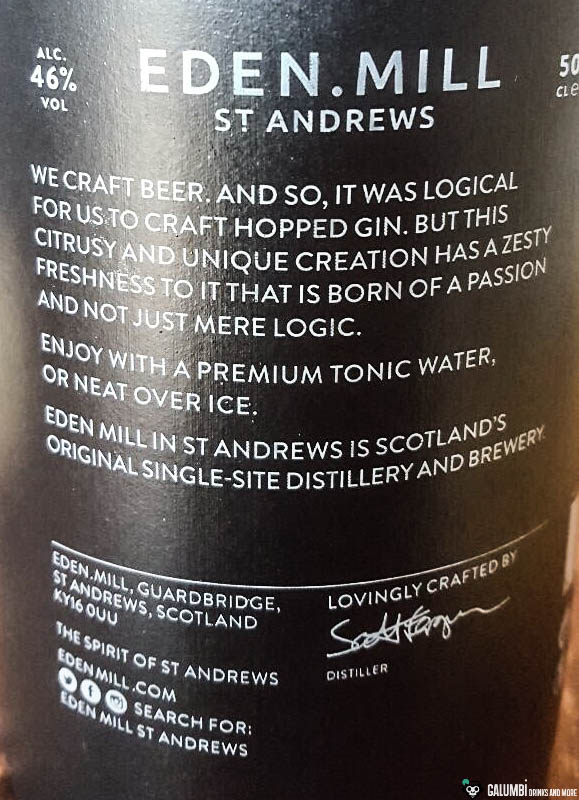 Aroma: the pale greenish Hop Gin offers a very interesting citrus-welcome like the Original Gin does and is joined by a rough, almost grassy note of hop. With a little imagination I can scent the coriander.

Taste: the juniper is joined by fresh citrus notes, but they turn out much bitterer and more reminiscent of the peel of citrus fruits: lime zest, lemon zest and maybe some kumquat (I know, strictly speaking this is not a citrus fruit). Hop makes itself clearly noticeable and also unfolds its grassy character. I like this gin very much and it is really something special! 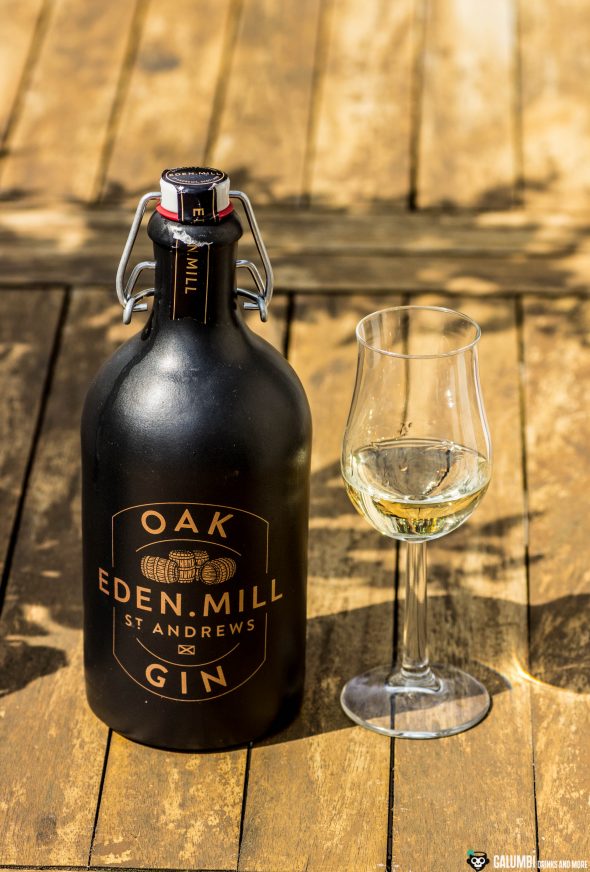 And again we’re talking about synergies: The Eden Mill Oak Gin bears its name due to an aromatic liaison with oak wood. Although Eden Mill distillery also produces whisky, we’re talking about the wood of former beer casks that have been made from oak trees. And in these barrels the Oak Gin was allowed to mature for a few months before bottling, which of course helps to push its taste onto a completely different level. Of course barrel-matured gins are nothing really new, for example I have tasted the Citadelle Reserve Gin some time ago but nonetheless it can be a good choice to improve or alter a gin. Among others, the used botanicals include licorice, angelica and coriander. It is similarly priced than the Hop Gin, but it comes only with 42% vol. so in this respect it is similar to the Original Gin of the series. 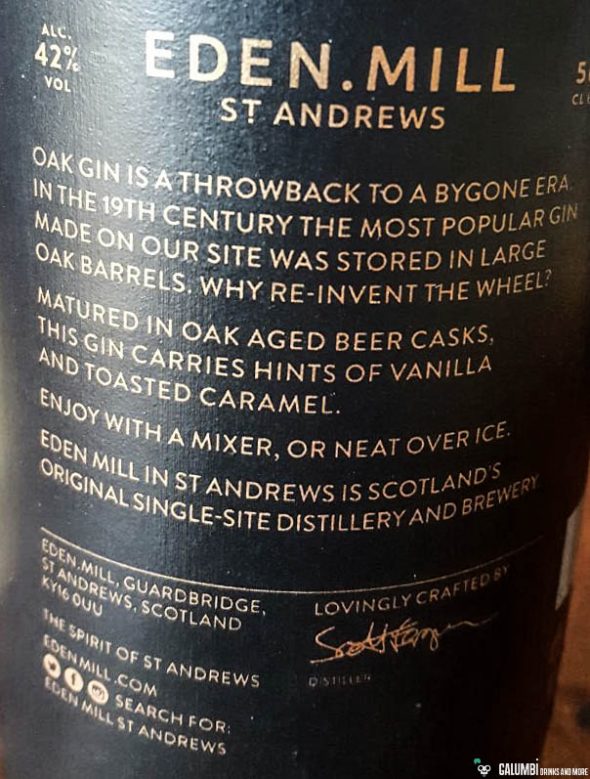 Aroma: Here the expectations are confirmed, too: the slightly ocher-colored Oak Gin is characterized by oaky tones without them becoming too dominant. In fact you can scent green pepper, similar to the one on the palate of the Original Gin. In the background there are some Christmas spices. All in all it is of course still recognizable as gin.

Taste: According to the manufacturer the Oak Gin should be somewhat reminiscent of whisky, but I definitely cannot confirm that. I don’t even feel remotely reminded of whisky. It is clearly a junipery gin – even juniperier (what an absolute comparative! Native speakers, forgive me!) than the Original Gin. In addition to that there are subtle oak notes and again the Christmas spices and some citrus in the background. I really like the Oak Gin, but it is less suitable for gin cocktails which are more on the fresh side. But for example inside of a Negroni I can imagine it very well. 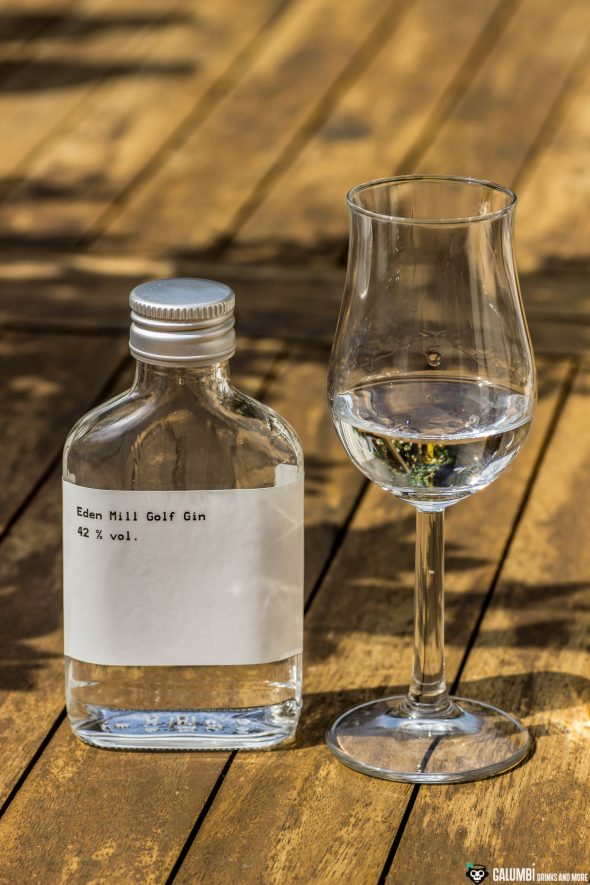 This gin is Scotland through and through. Perhaps not everyone will see this at first glance as the “concept” behind this gin is kind of a homage to a popular Scottish sport. I’m talking about Golf which actually is a – if not the – popular sport in the country and is done throughout the country with great passion. Outside of Scotland this might not be the main association with the country, but who is very keen on Golf will of course have known.

With the Eden Mill Golf Gin 2016 the Eden Mill distillery now entirely pays tribute to the flair of golf courses located in regional proximity to the distillery on the east coast of northern Scotland. The Golf Gin is effectively the baby of the family and was released this year. Because of the composition of botanicals for me it is perhaps the most promising of all the gins I’m introducing today as it really meets my taste: it has star anise, blueberries, red clover, rhubarb root, heather flower and angelica. And of course juniper.

Aroma: Very floral and conspicuously light with clear juniper and fine fruit (rhubarb and blueberries). In addition there is also some anise.

Finish: soft, medium and full of floral freshness. I also like the Golf Gin very much! 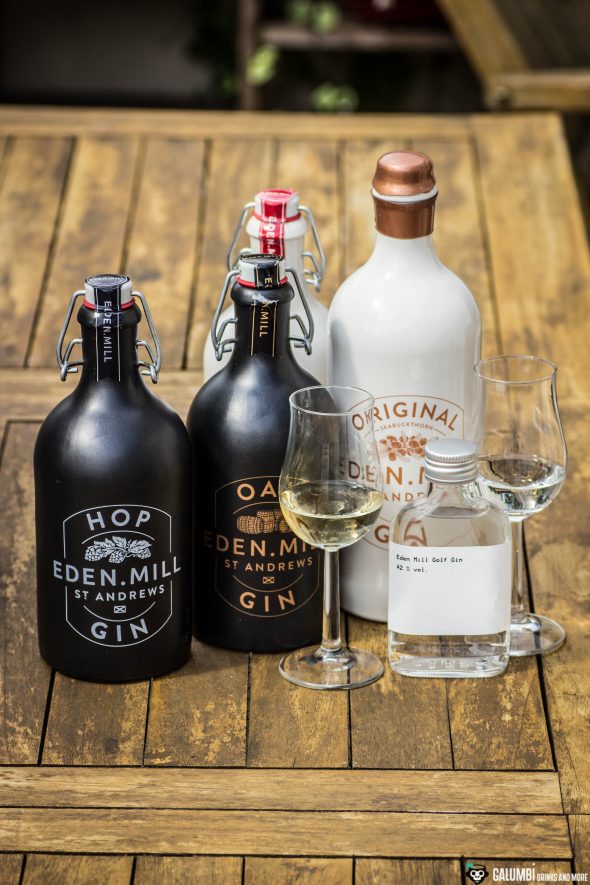 Buying sources: In stores or online. If you are a spirits dealer yourself, I can recommend you to look for the Eden Mill Gins here (only in German language).

One thought on “Pure Spirits: The Gins from Eden Mill”