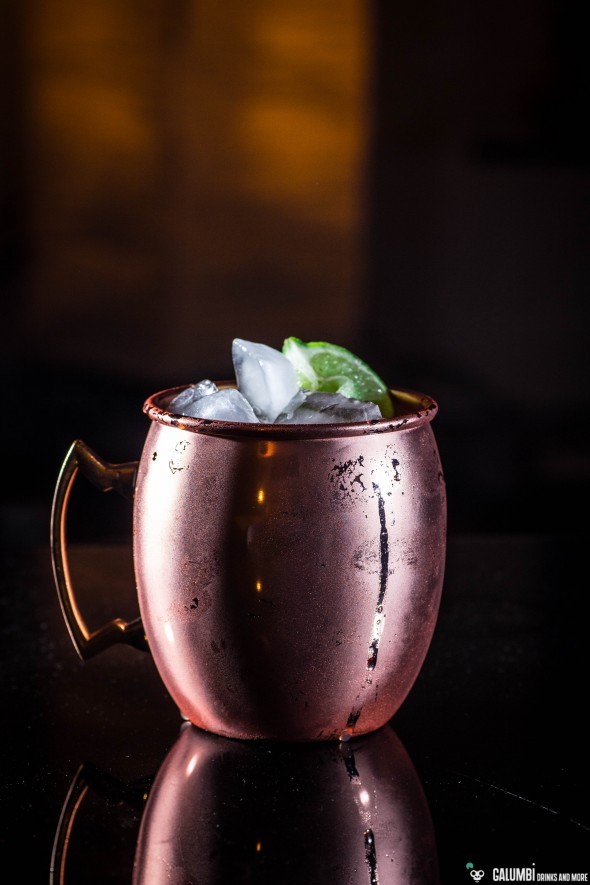 In Germany the huge development in the bar and drinking culture of the recent year has taken place in a little different way. Although there have been some internationally established bars with bartenders who thoroughly understood their craft long before, Germany has never been a comparable competitive power to metropolises especially from the Anglo-Saxon hemisphere.  A drink that is quite emblematic for a slight change of that is the Moscow Mule.

I guess only few would probably try to describe the Moscow Mule in the context of the development of the bar scene in Germany, but although such a view has little to do with the historical origins of the cocktail, it makes a certain sense. The cocktail itself belongs to the category of Bucks and was invented in the US, where it was closely linked to the vodka brand of Smirnoff. After the communist revolution in Russia the company Smirnoff left the country and was later sold to American investors. In order to boost the poor sales of vodka, the Moscow Mule was invented and became popular as a mixed drink made from ginger beer, vodka and lime juice while being served in a copper mug. A 1950s bestseller was born.

To order a Moscow Mule at a German bar would have been a rather difficult task until a few years ago. This was not at all because of a lack of vodka or something like that, but simply because a) hardly anyone knew the cocktail and b) the essential basic ingredient, Ginger Beer, was completely unavailable, respectively unknown.

It’s only been a few years ago since German manufacturers such as Thomas Henry picked up the pace and started to produce their own ginger beer (not without legal troubles: because of the German “Reinheitsgebot” (Purity Law) they were not allowed to sell it as “ginger beer” but had to rename it to “spicy ginger”). By now many retailers also import foreign ginger beers (like Old Jamaican or Fever Tree) and because of the rising Craft Beer movement you can also find alcoholic ginger beers from time to time.

So the ginger beer significantly extended and modified the German drinking culture lately. With that said the way was also clear for a drink that has elsewhere been already known for much longer (and therefore has been much less visible in the great concert of cocktails and mixed drinks). Meanwhile, the Moscow Mule is a well-known scene drink in Germany, which is now even being mixed increasingly on private parties. Variants, such as the Munich Mule with gin and cucumber slices have arisen and most bars feature a Moscow Mule on their menu.

Often the drink is, however, served in a very miserable way as a long drink without any lime juice and any sense for proportions. The classic way to serve a Moscow Mule, with lime quarters in a copper mug on ice, you will most likely find in more sophisticated places.

Preparation: squeeze juice from the lime quarters into the ice cube filled mug (and finally put them in, too) add vodka and ginger beer and stir carefully.

Buying sources: ginger beer can be found in well-stocked supermarkets, at specialized retailers or on the Internet. Outside of Germany it is very likely part of the normal range of drinks that are available at every supermarket or kiosk.