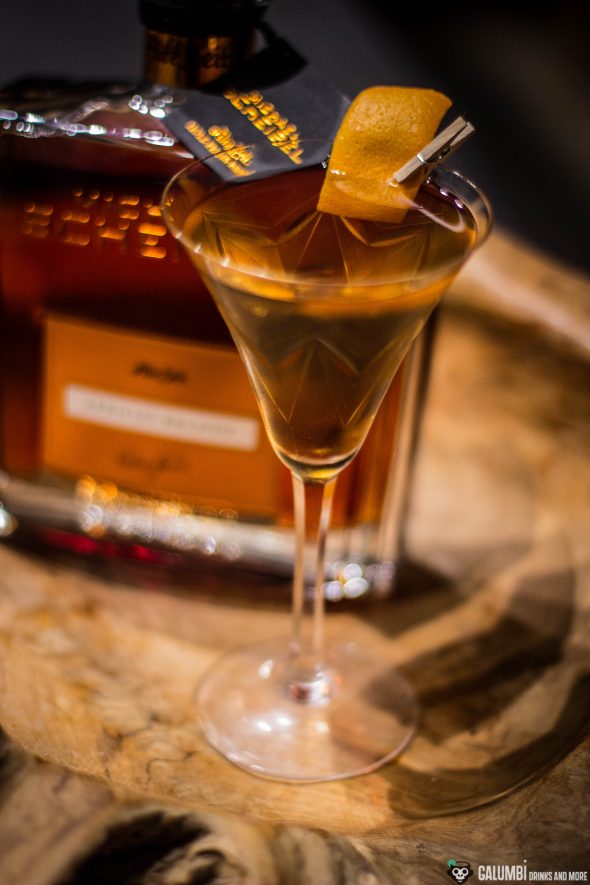 Good things come to those who wait! Indeed, this could be the motto of my article today. Because after a few years of blogging, I still haven’t written about a real classic among the bar ingredients: Apricot Brandy. But why is an Apricot Brandy a classic behind the bar and what exactly is it? I would like to get to the bottom of these questions and some others today. And of course I would like to introduce an Apricot Brandy here, which I can call my favourite with a clear conscience. (provided test product)*

Apricot brandy is, I’ve already mentioned, a classic ingredient behind the bar. And by “classic” I mean really classic here, because it already appears regularly in bar books in the 19th and early 20th century, at a time when, for example, you had to search a long time for vodka in such compendia. Therefore, the spirit must have been already easily available at that time and enjoyed great popularity. The problem here, however, is the same one that often arises when studying old bar books: it is not always clear exactly what is actually meant. Because the term “Brandy” is still not clearly defined in American parlance: In the context of fruits, it is usually used to refer to a fruit eau de vie, a clear, usually unsweetened spirit. The word brandy itself describes a spirit made from distilling wine, but often refers specifically to French cognac (which is also a brandy). The fact that there is now also the category of Spanish Brandy de Jerez makes everything even more complicated, but at least it does not appear in the recipe books around the turn of the century.

But what is Apricot Brandy? Well, it is not always clear, because sometimes (depending on the recipe) it makes sense to interpret it as Apricot Eau-de-Vie. But in general, under this name an apricot liqueur is used and is offered by various manufacturers until the present day. These liqueurs usually have a colour somewhere between bright orange, amber and dark brandy and are also sometimes very far apart in taste. Sure, common to all of them is a somehow apricot taste and a certain sweetness, but in this field, not everything is as simple as it sounds. Whoever has been able to witness the nuances of taste that lie between an apricot brandy with a rather apricot kernel-based flavour and a fruity apricot brandy with a more apricot pulp-based taste, will at least have an idea of how complex the differences in apricot brandy can be; and these are by no means all differences.

Now, however, I would finally like to turn to the bottle, which I would like to discuss here today against this background. Because it is about the Scheibel Alte Zeit Apricot Brandy (Alte Zeit meaning Old Time). I have already written a few lines about the Scheibel distillery in the past, so I would like to refer to the article in question at this point and for this purpose. 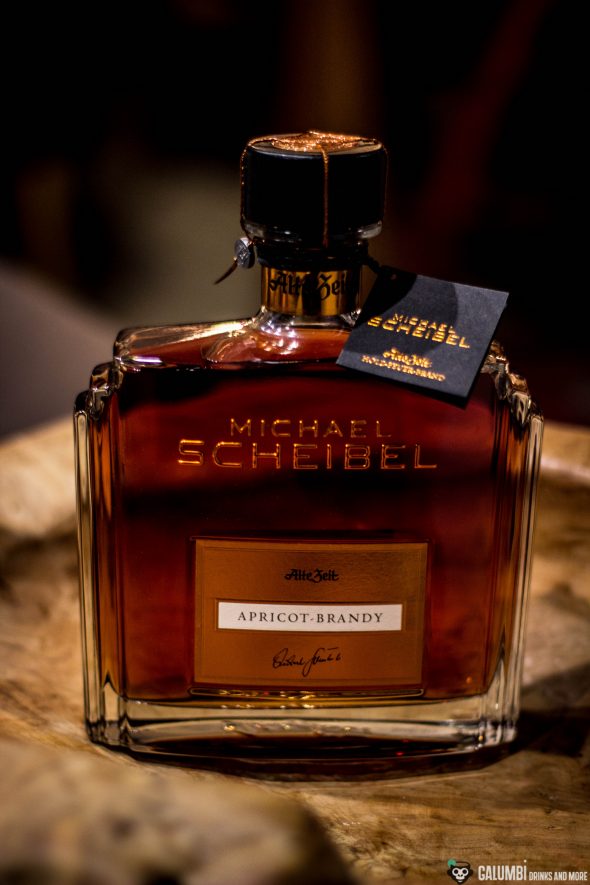 The Scheibel Alte Zeit Apricot Brandy of course alludes by its name to a traditional, old-fashioned way of preparation – in fact once again an old family recipe is mentioned as a basis. However, it should be clear to everyone that a good deal of marketing speech is also involved here. Nevertheless, it is definitely worth to have a look on what is in this bottle: the basis is made from Styrian apricots, from which an apricot brandy is distilled over a wood fire after a former slow cool fermentation. Then it is rounded off with neutral alcohol, brandy, cognac, Jamaican rum, plum brandy, raspberry brandy and some vanilla. That sounds really promising (maybe a little surprising if you did expect only apricots). With a proud abv of 35% (nothing which can be taken for granted when it comes to Apricot Brandy) the Scheibel Alte Zeit Apricot Brandy is finally bottled. The price for this bottle is around 60 Euros, this is certainly not a candidate for the title of the cheapest apricot brandy out there, but of course, it is also an expression of self-confidence in terms of quality.

Speaking of the bottle: this is a nice one indeed! A heavy, square bottle that perfectly shows the dark amber colour of the Apricot Brandy inside, thanks to the label that does not take up too much space. Sure, it doesn’t look filigree, not humble either, but it is a real eye-catcher! 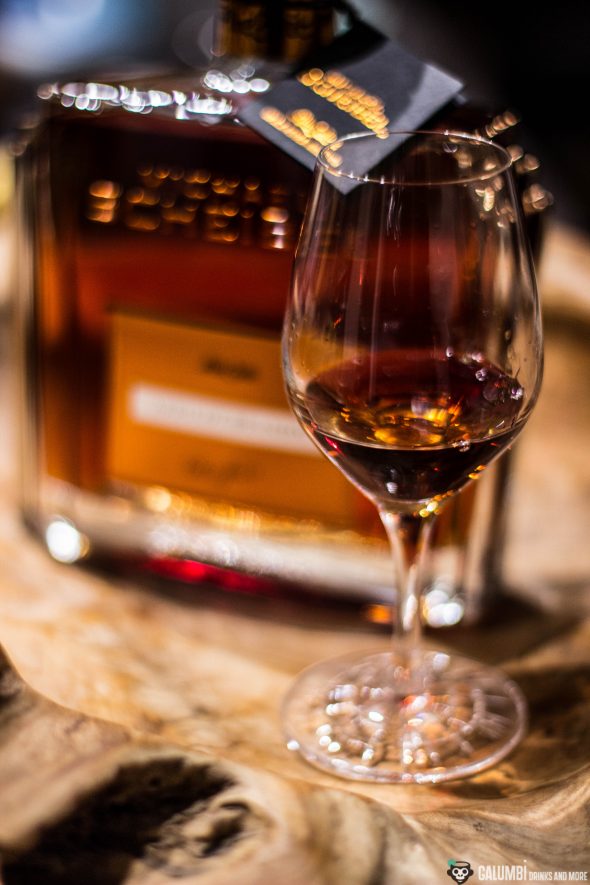 Aroma: Wow, this one is definitely no comparison to many common apricot brandies, which are also a bit lower priced. The aroma is very voluminous and complex, but is undoubtedly dominated by intense apricot kernels. For those who prefer an Apricot Brandy that clearly goes in the direction of apricot pulp without the typical, slightly marzipan-like kernels, the Scheibel Apricot Brandy might not be ideal. But since I taste it in comparison to the majority of apricot brandies available on the market, which almost all have clear kernel aromas, this is probably something to be considered only for very few people. Dark and sweetish tones of brandy, a touch of dark plums, raspberries (from the raspberry brandy contained) and also vanilla are part of the overall picture. But of course also fruity, fresh notes, reminiscent of apricot pulp, citrus and the related peach find a place in the aromatic spectrum. Associations of herbs flare up in the background. There is really a lot in the glass and it is fun to scent it for a long time.

Taste: Without a doubt, this is a liqueur, because it already has a pronounced and heavy sweetness that slowly settles on the tongue, almost like a very liquid honey. Anyway: if you should be afraid of a liqueur close to an amaretto with strong marzipan notes as a consequence of my words above, I can reassure you: The apricot kernels are clearly present in the taste, yes, but by no means are they too dominant and there is no marzipan attack happening. As someone who does not like marzipan, I am not a bad reference for that statement. Apart from (honey) sweetness, apricot kernels and pulp, there is also a soft vanilla, associations of plums and the fresh and sour momentum of raspberries, but they are clearly behind the apricot paradigm and leave the stage to it. Herbal notes are barely perceptible and remain merely a greeting from the world of ideas; minimal peach, sweet cherries and a hint of nuts crystallize over time.

Cocktails that call for apricot brandy can be found – as I mentioned at the beginning of this article – quite a few, especially in the older bar books from the Prohibition and Pre-Prohibition periods. In fact, many drinks from that time are very similar to each other and you can find, for example, in the category of vermouth cocktails, some recipes that differ only in nuances, which today are often seen as variants or twists of certain cocktails (e.g. the famous Martini) and would rather not be given their own name. On the other hand, the same thing often happens nowadays with sour-style cocktails, which often only differ according to the syrup used or sometimes cite an alternative source of acid. 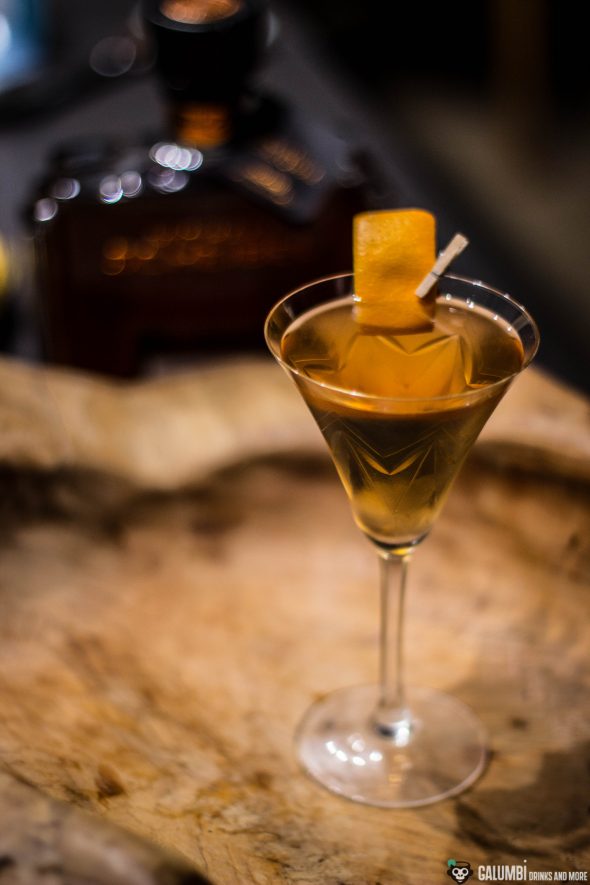 Anyway, the drink I dared to try today is the so-called Self-Starter Cocktail from Harry Craddock’s famous Savoy Cocktail Book. Mr. Craddock’s original recipe calls for half a part dry gin, three eighths Kina Lillet and one eighth apricot brandy with two dashes of absinthe. I loosely took that as an orientation, but I deliberately didn’t keep the proportion of apricot brandy low. My approach is basically a prime example of how far the interpretations of old cocktail recipes can and sometimes do diverge. Of course, such a cocktail can be made dry and very Martini’esk (which most people would probably do) – and that is good and would convince me, too. Some people actually understand the apricot brandy in the Self-Starter Cocktail as apricot eau-de-vie, which of course would further strengthen this tendency. But if you’re not afraid of a little more sweetness, you’ll also get a very elegant drink, which is also a great digestif (as an avowed fan of dry and bitter cocktails I don’t necessarily consider doing something like that every day!). And indeed, I didn’t want a quasi-martini this time, but deliberately chose the great combination of fresh, sweet-fruity, dry, spicy and also bitter flavours in the form listed below in the recipe. The Scheibel Alte Zeit Apricot Brandy is the smallest part of the base ingredients (apart from absinthe), next to Dry Gin and Cocchi Americano (the equivalent of Kina Lillet), but it also shows its special characteristics and contributes with its aromatic sweetness to the fact that this variation of the Self-Starter Cocktail is very independent and does not just come along as a “Martini with a shot of apricot”. 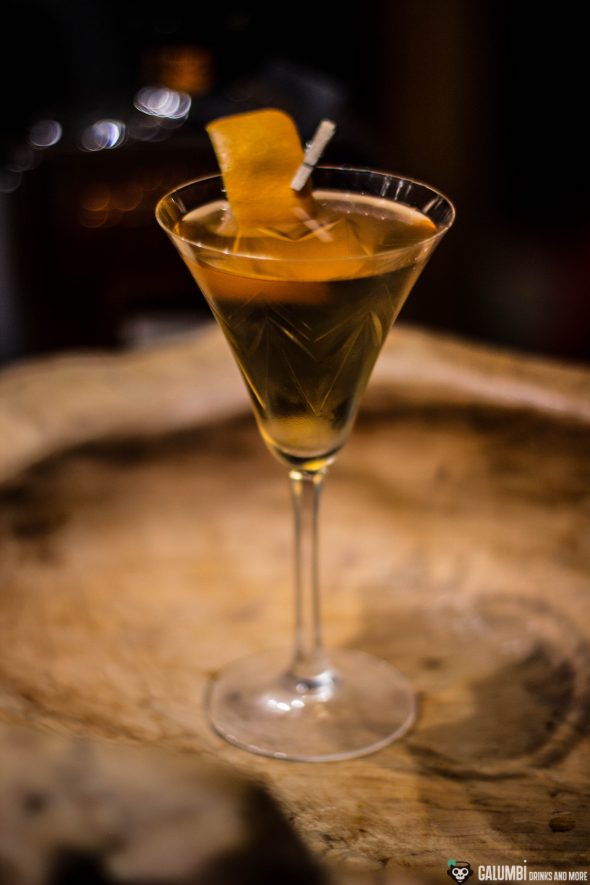 Preparation: First “wash out” the pre-cooled glass with Absinthe. Just pour some dashes of Absinthe into the glass and turn it briefly so that the inside surface is coated with Absinthe. Pour away any excess Absinthe. Then stir Dry Gin, Cocchi Americano and Scheibel Apricot Brandy on ice in a mixing glass until cold and strain into the glass washed out with Absinthe. Spray with the oil of an orange zest. 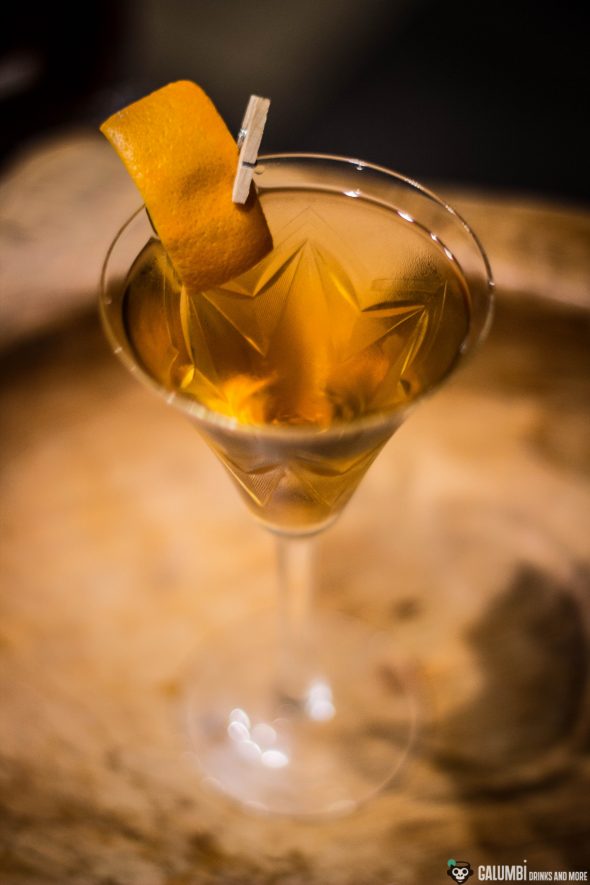