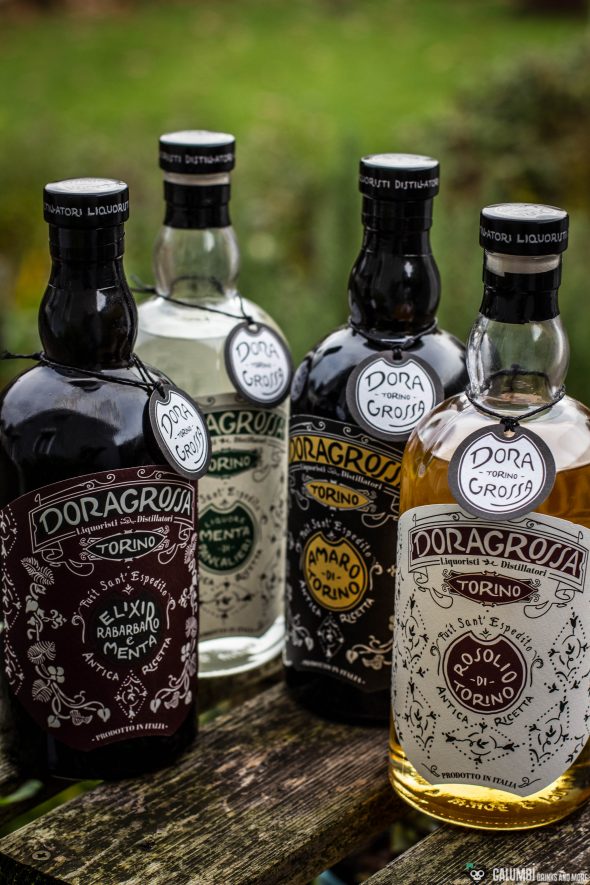 I am back from a vacation trip to Italy. And that’s why today’s article is the right one to publish now. A few years ago, hardly anyone outside of Italy knew what a Rosolio is. And even if this term still might not really provide an aha-experience for most people, this has undoubtedly changed in the bar and cocktail sphere. The Italicus Rosoli di Bergamotto is undoubtedly responsible for this with all its awards and its high presence in the media – I have also reviewed it here in the past (see link). But the competition is growing! (provided test products)*

Or better said, the range of easily available Rosolios outside of Italy is growing. The one I’m talking about comes from Turin (apart from southern Italy, the Piedmont region is the main distribution area for the liqueurs made with rose petals) and is manufactured and sold under the name Doragrossa. The manufacturer Doragrossa pays tribute to the historical peak of the Rosolio production, but also the one of Amaros and other Italian liqueurs. Therefore, I will not only review one Rosolio here today, but three other Italian liqueurs as well! All of them with completely different emphases and thus of course different potential for the use behind the bar!

Doragrossa is the name of a historic district around today’s Via Garibaldi in Turin. During the 16th century, King Karl Emanuel of Sardinia-Piedmont’s edict developed this quarter into a centre of liqueur and spiritss production – as the manufacturer informs on his website. Despite all the adulation with historical flair, there the website completely lacks information about the history of the manufacturer itself, about which we unfortunately learn as good as nothing. However, in the end the products should speak for themselves – no matter what old recipes were used, if the company is operated in the umpteenth generation (or even not) or which historical spirits categories are covered.

I would like to start with the Rosolio, the Doragrossa Rosolio di Torino. This Rosolio is bottled at an ABV of 30% and is made with lemons, cinnamon, aniseed and cloves, in addition to alcohol and sugar, of course. These are at least the ingredients the producer reveals. 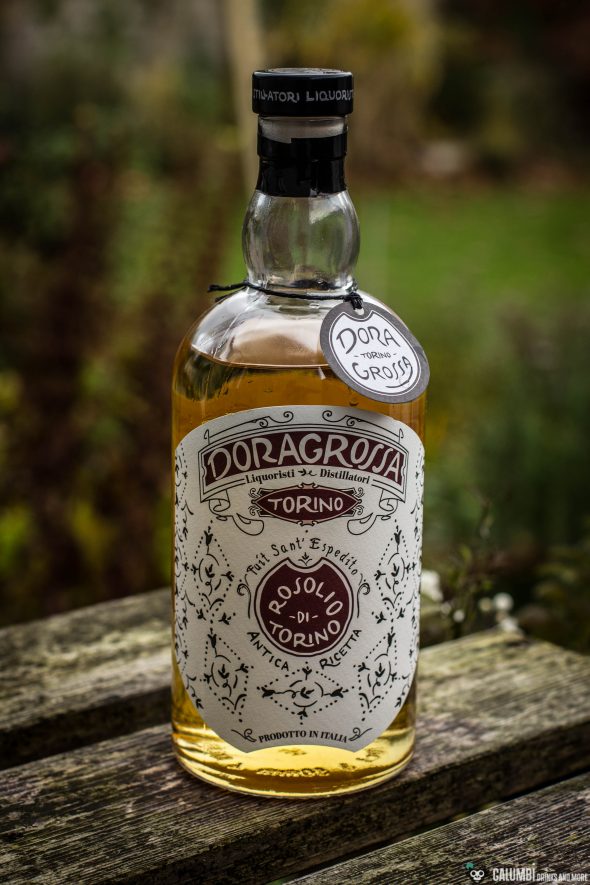 Aroma: Completely different from the Italicus mentioned above, this Rosolio is much more voluminous and less filigree with a truckload full of spices. Almost Christmassy notes of cloves, anise, lemons, but also cinnamon – all these spices are clearly recognizable! A hint of subtle peppermint creeps in, otherwise I have to think of gingerbread, or more precisely of German Pfeffernüsse.

Taste: The Rosolio di Torino is sweet and spicy. Again the Pfeffernuss associations are there from the beginning, in addition a fine, candied lemon peel and some candied ginger, pimento and cinnamon.

Next comes a classic of the Italian spirits landscape, which – unlike the Rosolio – should be a household name to just about everyone: an Amaro (for more background information on Amari, take a look at this article). The exact name is Doragrossa Amaro di Torino. Here, pink rhubarb roots, juniper, gentian, wild fennel and liquorice were used for production – a thoroughly interesting mixture that also makes one think of a Rabarbaro. The Amaro di Torino comes up with an ABV of 23%. 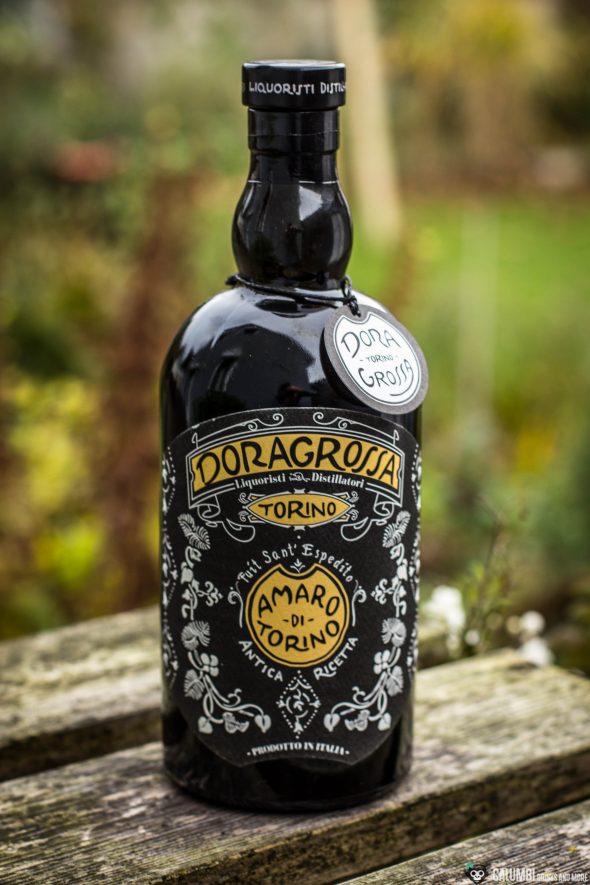 Taste: Sweetness and bitterness are quite well balanced, again bitter root notes of gentian predominate, which are quite typical for Amari. In addition to that some caramel, cloves and again a hint of fennel and liquorice.

Apropos Rabarbaro: Doragrossa also offers such a liqueur in its range, but not a classical one. Instead it comes along with green mint. Accordingly, these are the two primary ingredients in the Doragrossa Elixir Rabarbaro e Menta: pink rhubarb root and green mint. This liqueur is bottled at 20% abv. The word elixir here refers to the pharmaceutical origins of the category. 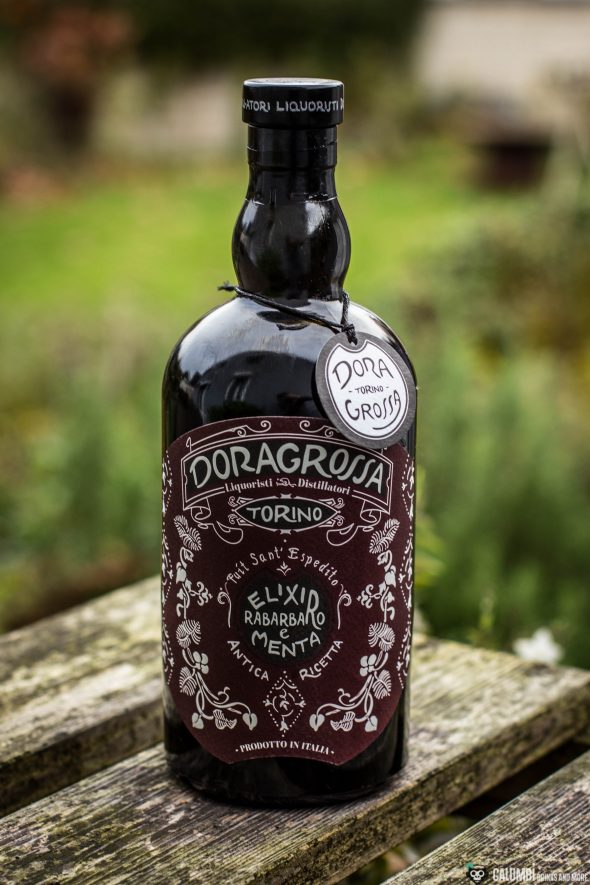 Aroma: A distinct menthol note of peppermint, followed by bitter notes reminiscent of Amaro, I have to think of roots again. I also find caramel and an idea of preserved dark plums.

Taste: On the palate a rich, dark honey with peppermint dominates, in addition there are associations of molasses or sugar beet syrup. Bitter tones from the rhubarb root round off the flavour in an appealing way.

Finish: medium long with an interplay of sweetness, bitterness and menthol. 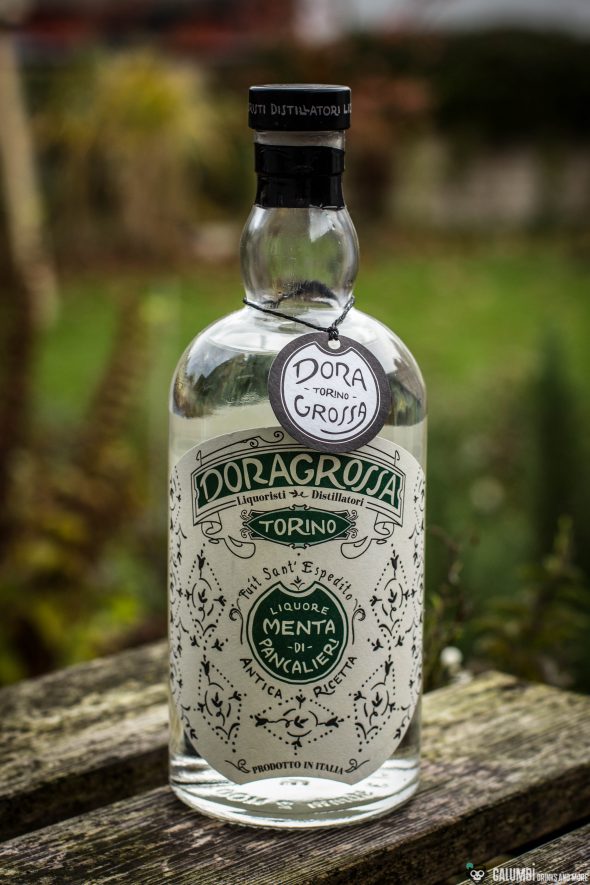 Aroma: mint, menthol, in general: glacier sweets (Gletscherbonbonbs in German), yes, that’s the best way to describe it. A hint of lemon is also there.

Taste: the taste is very much in line with the expectations aroused by the aroma, but with a pronounced sweetness added to it.

Finish: long-lasting menthol note with a fine sweetness underneath.

I would like to introduce two different drinks here today. Of course, four liqueurs offer an incredible number of possibilities for use in cocktails, which is why I cannot do justice to their full potential here today. At least I will use the Doragrossa Rosolio di Torino and the Doragrossa Amaro di Torino in one drink each. More drinks will follow in the future.

The first drink is an exotic long drink in which I have combined Asian-inspired aromas with the spicy, filigree character of Doragrossa Rosolio. A white rum infused with fresh coriander, lime juice, lemongrass, bitters and ginger beer result in a refreshing cocktail called Eastern Rose. 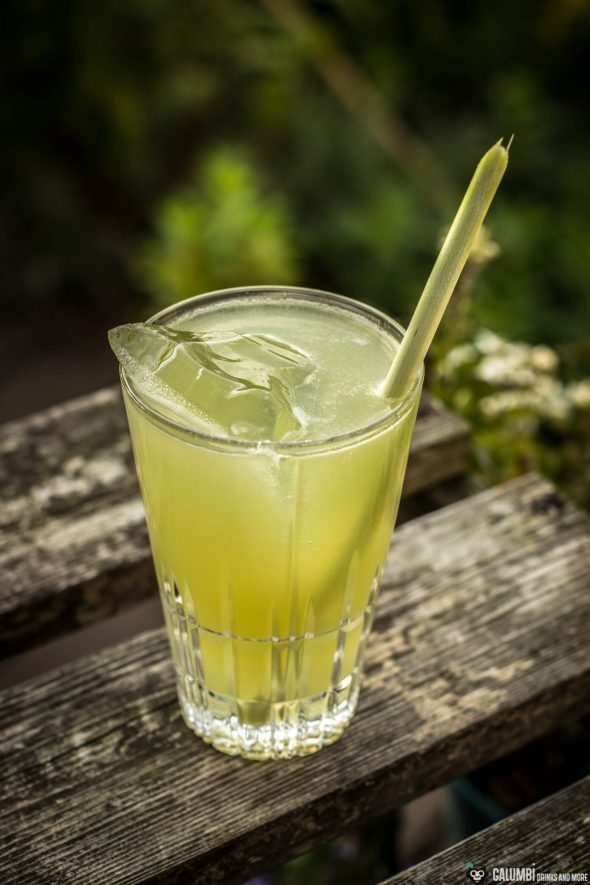 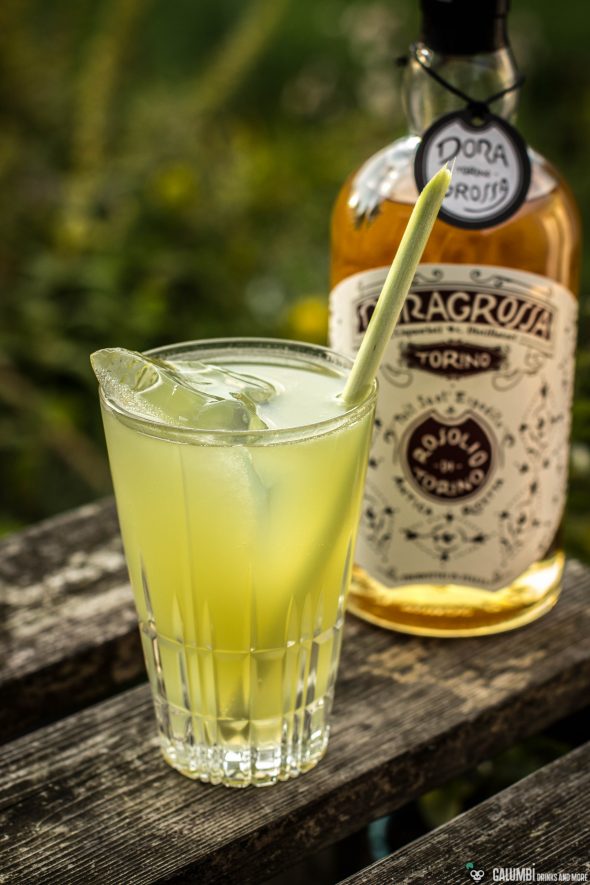 White rum infused with coriander: Add a handful of fresh coriander green to every 250 ml of white rum and let infuse for 24 hours. Then take out the coriander green (sometimes filtering is not necessary). The rum should now have a greenish colour.

Preparation: Halve lemongrass lengthwise and put into a shaker with the remaining ingredients (except ginger beer). Shake vigorously on ice and then strain twice into a glass filled with an ice wedge. Finally top with Ginger Beer.

Ginger also plays a role in the second drink, this time in the form of a jam: Together with a dry gin I used the Doragrossa Amaro di Torino together with lemon juice, orange juice, tonic bitters and English ginger jam and fizzed it up with soda water. A nice drink to start the evening – if you still want to go out, for example: Andiamo! 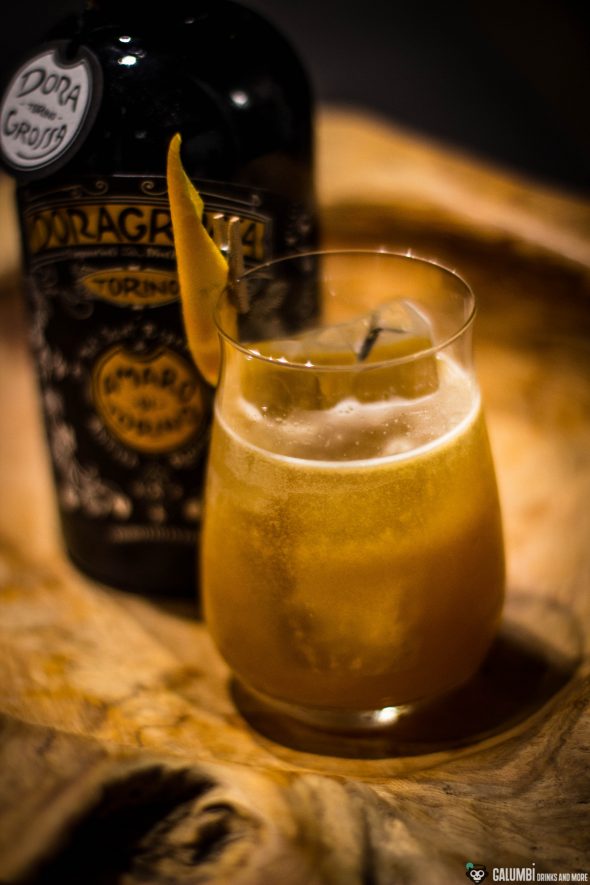 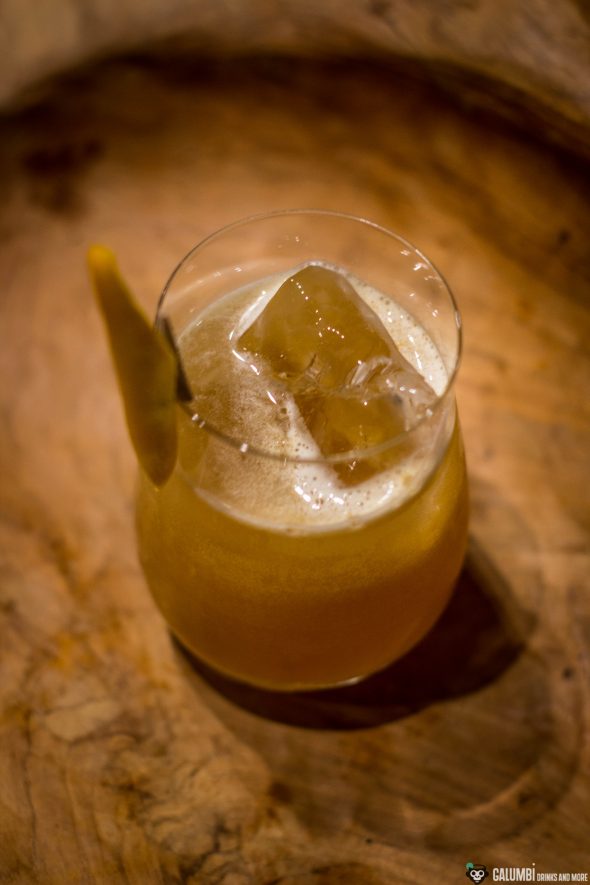 Preparation: Shake all ingredients except the soda water vigorously in a shaker on ice. Finally strain double into the glass filled with fresh ice and fizz with soda water. 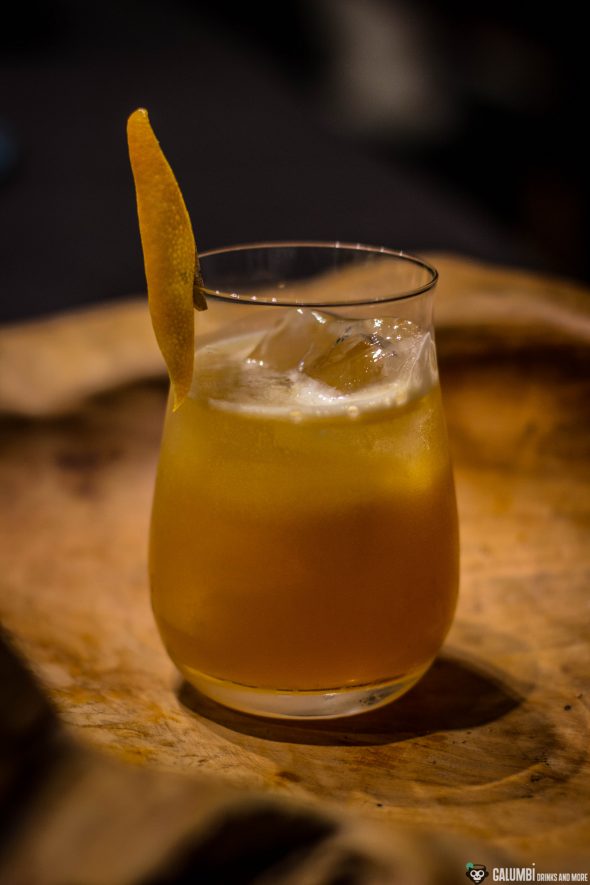