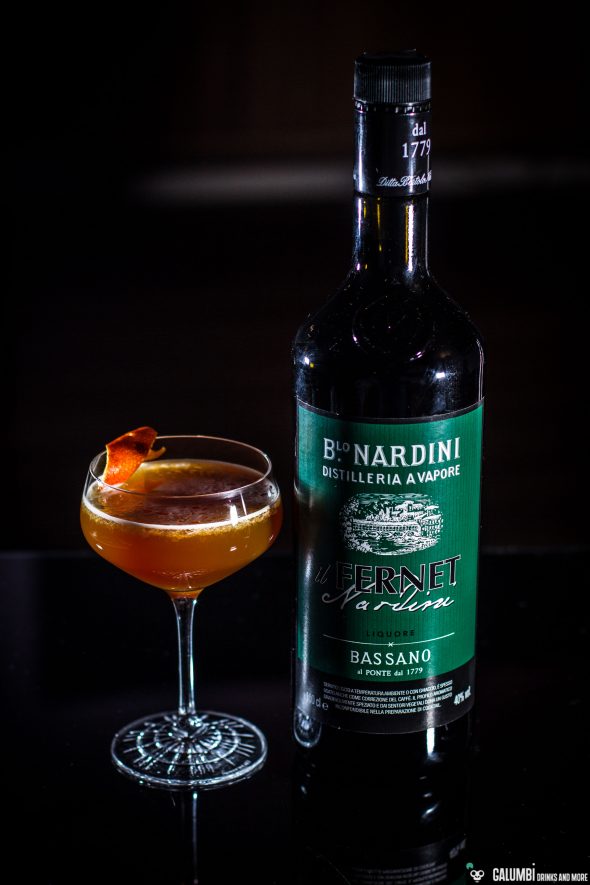 I would like to begin today’s article with a fundamental commitment: I love bitter liqueurs! Certainly that won’t be a surprise to anyone who is following my blog for a while because my preference for bitter cocktails and accordingly also bitter cocktail ingredients can be found in many articles and recipes (and thus has also played a crucial role in the creation of many of my own drinks). Of course that does not mean that I’m only writing about bitter stuff, but I like to do so for sure. Therefore, it is long overdue to take a closer look at Italian Amari. (provided test product)*

Amari is the plural of Amaro, which should certainly be familiar to anyone who is really into spirits respectively liqueurs. For all those who don’t really know what an Amaro is, let me try to briefly explain: it is a description for Italian bitter liqueurs (the word Amaro simply means “bitter”), which, however, can be set up very differently. Not at least because there is also a great tradition of bitter liqueurs in other European countries (for instance the French Amers, herbal bitters in many Slavic countries, numerous herbal liqueurs from the German-speaking area, etc.). If you have a look at the EC Regulation No. 110/2008 of the European Parliament and of the Council, Amaros (as well as other bitter liqueurs) must be ‘predominantly bitter-flavored’ spirits, which can be made with natural and nature-identical flavorings as well as natural extracts and must have a minimum ABV of 15%. You might already guess that such a definition leaves a lot of room for variations and when we talk about the taste, you can not only argue in a proverbial sense about what is a predominantly bitter flavor and what is not.

Anyway, as it was often the case in the history of herbal spirits, the production of Amari in Italy goes back to the demand for medicinal products. Traditionally, the first Amari were made in monasteries and later in pharmacies to provide a remedy for all sorts of ailments. Over time, these Amari evolved into very different varieties which have formed subcategories of these herbal liqueurs, all of which in turn have certain peculiarities. Whether the quite classical, herbal Amari with their clearly balanced sweetness, Fernets, Rhabarbaros, Artichoke bitters, the classic reddish bitters (with Campari as the probably best known brand – although the affiliation to the category of Amari is controversial here) or many other more or less unique varieties: In any case, it quickly becomes clear that Amari exist in numerous and partly distinctly different ways. Accordingly, for reasons of time alone, it cannot be my claim to offer a treatise on Amari here that would be fit for an encyclopedia.

What I would like to do instead is to gradually and continuously write about certain bottlings of this type of liqueur with corresponding reviews. And I would like to start today with a particular bottling from Nardini. This is not a completely absurd choice insofar as the Destillery Nardini is the oldest documented distillery in Italy. It was founded by Bartolo Nardini in 1779 in Bassano del Grappa in the Veneto region and is family-owned to this day (in the seventh generation). If you are familiar with Italian spirits, the name Nardini will certainly and primarily be associated with high-quality Italian grappa but also when it comes to Amari, the people at Nardini know their craft.

The bottle that I want to take a closer look on today is the Nardini Fernet. It is made at the distillery Bassano and on the bottle’s label you’ll find the the words “Distilleria a Vapore”. This refers to the way in which grappa, Nardini’s core production, is distilled: in a first distillation process, steam vapour that carries the alcohol of the grape pomace is collected and finally, after condensation, rectified for a second time on column stills. Over the course of two centuries, Nardini’s production expanded to include a wide range of fine liqueurs, aperitifs and bitters. Mostly grain alcohol base, with the addition of fine herbs,  fruits and spices, and other ingredients. One of those grain alcohol based products is the Nardini Fernet. Typical botanicals for Fernet are myrrh, rhubarb, saffron, cardamom or chamomile, although the Nardini distillery only reveals “Chinese rhubarb, gentian root, spices and herbs” as ingredients for their Fernet. It is bottled at a Fernet typical ABV of 40% vol. – How the Nardini Fernet has performed in the tasting you can read below: 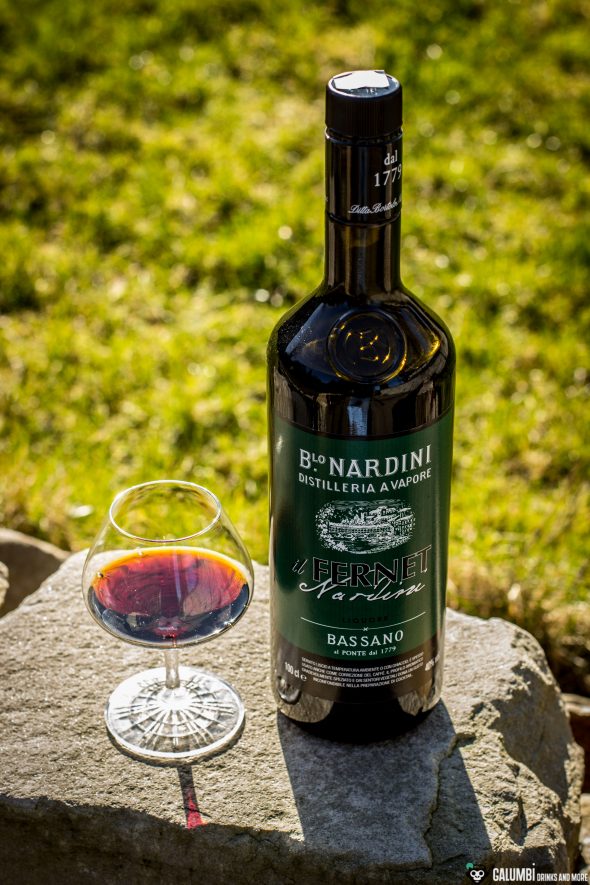 Aroma: On the nose there are very tart, spicy and earthy notes as you would expect them from a Fernet. You can almost “smell” the bitterness of this liqueur, but also a nice, sweet component which lurks in the background – it reminds a little of golden syrup. The rhubarb can only be guessed at; discreet notes of menthol are also there, as well as a whole potpourri of hard-to-determine spices and herbs.

Taste: On the palate, this Fernet unfolds its intense-bitter and spicy and earthy aroma. The menthol notes are more pronounced than on the nose, but without becoming too superficial. The sweetness of the Fernet is also there, but it does not appear superficially as well – who likes more sweetish herbal liqueurs will not really become friends with the Nardini Fernet when having it neat.  Associations of rhubarb can be found, the gentian root is easier to recognize. Powerful and extremely spicy, the Nardini Fernet can fully convince me. It offers unbelievably many facets, though in parts they are really difficult to define.

When it comes to mixing, I’ve used the Nardini Fernet in a really great cocktail, which has become one of my big favorites: the “Dantes in Fernet”. The pun alludes to the first part of Dante Alighieri’s Divine Comedy named “Inferno” and the drink was created by French barman Mickael Lenu at the Ancestral Bar in Wellington, New Zealand and it is somehow reminiscent of the Blood & Sand cocktail. In the original recipe it calls for twelve-year-old Glenlivet and Fernet Branca, but the version that I have adapted works with a slightly smoky, wonderfully full-bodied single malt with notes of roasted coffee and chocolate, which – as I think – delivers an even better result than the rather apple-fruity Glenlivet 12: the Fettercairn Fior. It simply seizes the orange in a better way and also harmonizes wonderfully with the chocolate bitters. And, of course, with the specific characteristics of the Nardini Fernet – which simply turn this cocktail into a liquid poem – Dante Alighieri would have certainly agreed (and I hope Mickael Lenu would like my variation, too). 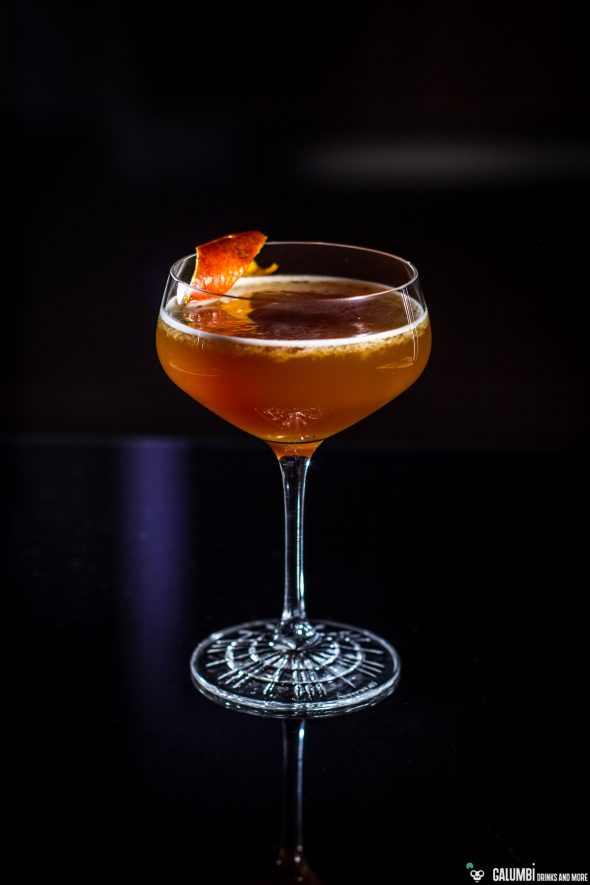 Preparation: Shake all ingredients vigorously on ice and double-strain into pre-chilled glass. 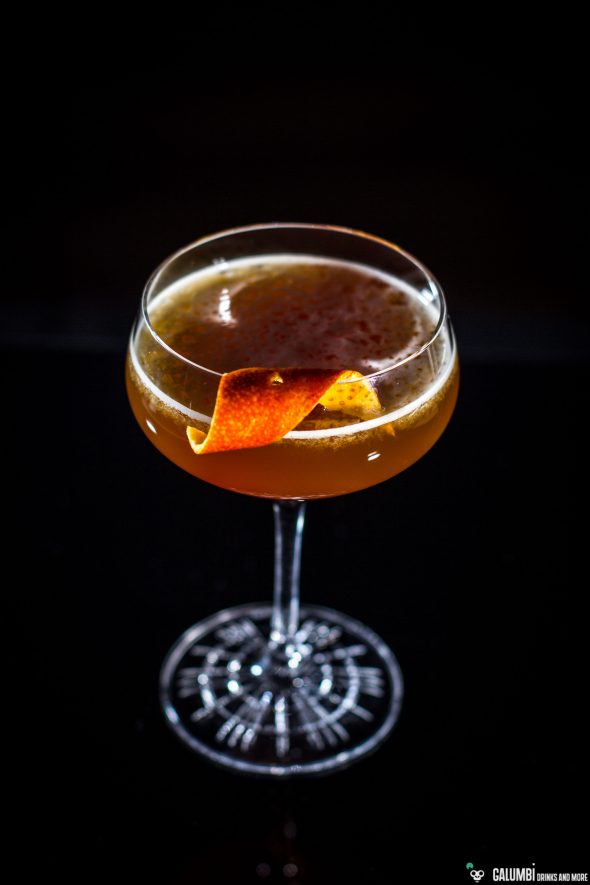