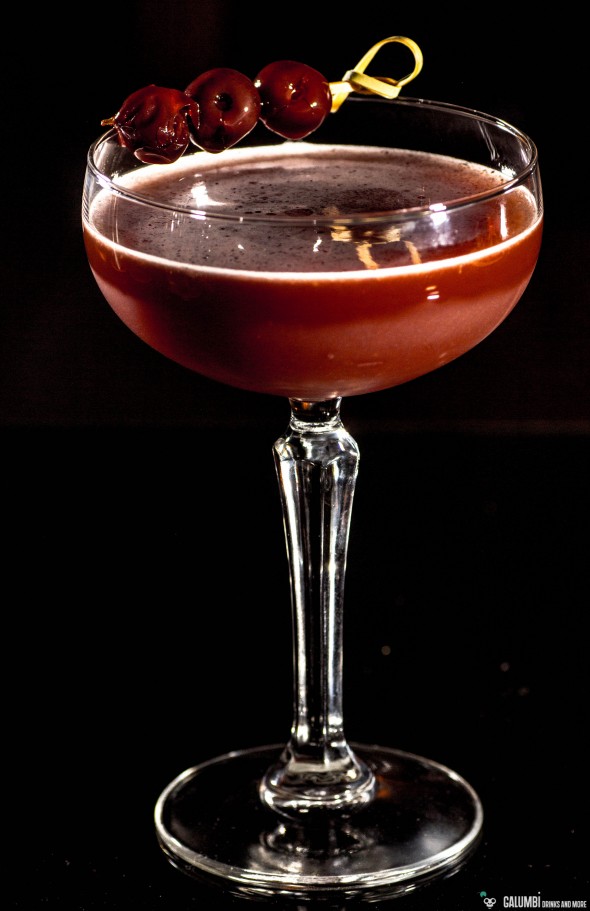 Some cocktails must obviously taste terrible if you have a closer look on the list of ingredients. As a natural consequence such recipes are not very common: who wants to order a foul-tasting swill or feature it on the bar menu! The Blood and Sand seems to be one of those drinks at first sight … but then proves the opening words to be lies.

I got to know the drink on my second visit to Bar Le Lion in Hamburg. After I already had a few drinks, I asked curiously for a cocktail with smoky Islay whiskey. There are not many prevalent recipes of such drinks out there and I was curious what the staff would recommend to me or if I would even get a recommendation. When the the Blood and Sand cocktail was suggested to me and I heard about the ingredients my initial reaction was similar to the one described above. But I took a chance and ordered it. And what can I say? The result was fantastic!

The name “Blood and Sand” may also seem a little bit strange. It is named after the eponymous silent film from 1922, which is an adaptation of the Torero-novel “Sangria y arena” of the Spanish author Vicente Blasco Ibáñez. It is said that the drink was served at the film’s premiere, but that’s not entirely secured.

The taste of the drink is not easy to describe. The ingredients used are Scotch whiskey (there’s no need to use a smoky one, but personally I find it much more interesting), cherry liqueur, orange juice and red vermouth. As already said, at first glance that is indeed a really strange mix. Nonetheless, Vermouth, orange juice and cherry liqueur merge to a tangy yet fruity melange that works as an awesome fundament for the smoky flavors of the whiskey. Like a small campfire under a fruit yielding cherry tree in the midth of summer.

„At first glance, this unusual cocktail seemed a godawful mix. But over time, I noted that the recipe appeared in some serious cocktail books, so I finally tried it. The taste convinced me never to judge a drink again without tasting it.“

A special feature of the drink is also the very rememberable recipe. Each ingredient is in fact used in equal proportions in the drink. There are versions with less orange juice, as well as some with less vermouth and cherry liqueur (those are the ones I usually tend to mix for myself). Anyway, I’m going to present the classic recipe here. Everyone can adjust the measurements to personal taste.

Combine all ingredients in a shaker on ice and shake vigorously. Then double strain into your chilled glass.

Garnish: cocktail cherry (In the Bar Le Lion it was served with three Griottines-cherries. Since I really liked that I have adopted this.)

In well-stocked supermarkets you’re very likely to find all the ingredients. Otherwise – as always – your personal liqueur dealer will help you (or the Internet, of course).

One thought on “Blood and Sand”