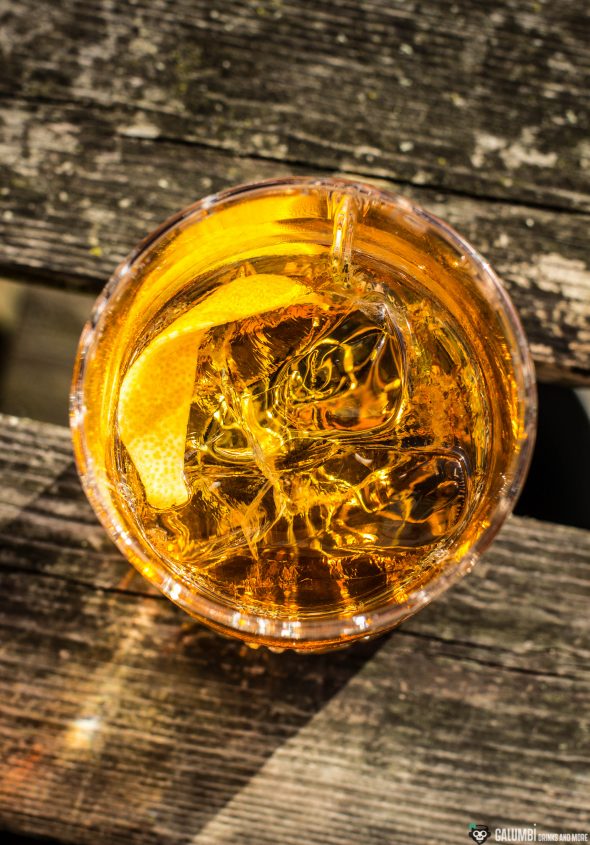 If you do some research about Tequila as the Mexican spirit par excellence, of course you will first read about what it is, how it is made, what kind of categories exist and the like. Of course, its close relationship to Mezcal (with tequila actually being a mescal), the raw material and some agricultural information as well as regional designations of origin will also be part of what you find. But most likely you will also come across the names of special people who play an outstanding role in the genre. One such person is Felipe Camarena. (provided test products)*

The Camarena family has made a name for itself in the Mexican tequila production and stands for solid and genuine distillates. Felipe Camarena continues this tradition in the fourth generation. Three tequila brands, which are produced under his aegis, are particularly associated with his name: Pasote, Terralta and G4. While the Pasote Tequilas are very well known and highly praised, the other two versions are a little less well known, at least here in Europe. However, I would like to take a closer look at them today. Especially the brand G4 (4th generation) has become more and more popular in the USA. But also the Terralta Tequila comes from the same distillery, namely the Destileria el Pandillo with the NOM 1579 in Jesús María, Jalisco. Both Tequilas are made from organic agaves grown by Camarena himself. The special difference between the two brands is the water used: Terralta is produced with a spring water extracted from the ground, which comes from a depth of 140 metres and is supposed to bring mineral earth aromas into the distillate. The G4, on the other hand, is reduced to the desired drinking strength 50% with spring water and 50% with rainwater after distillation. They are all bottled at 40% vol. 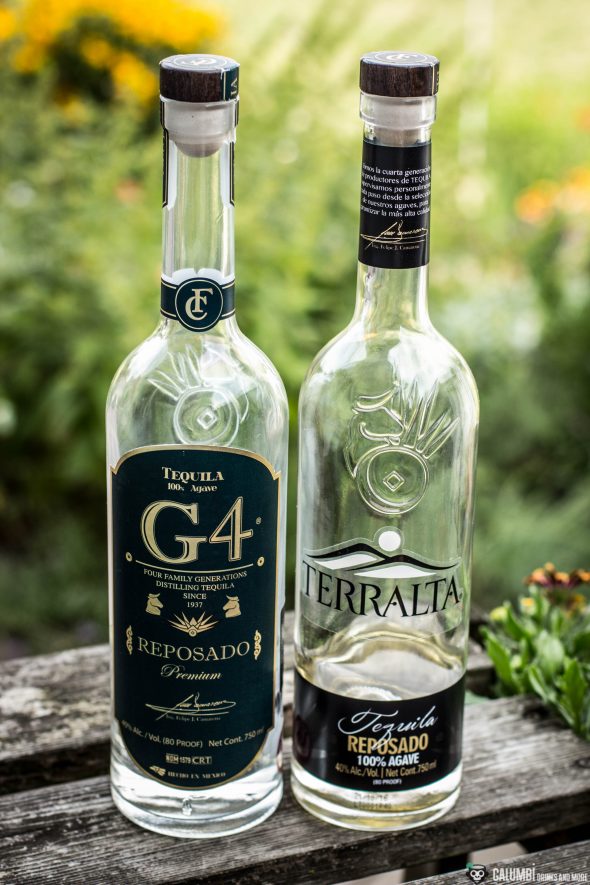 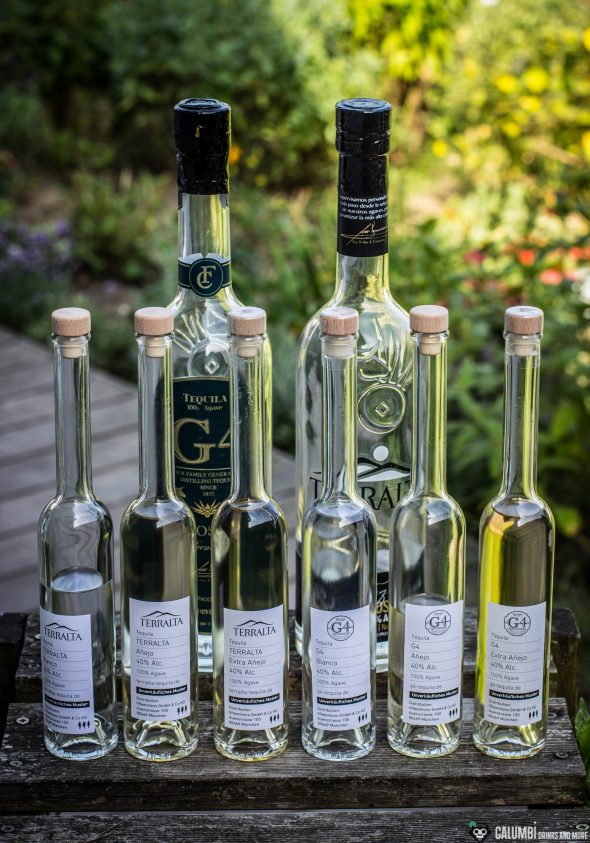 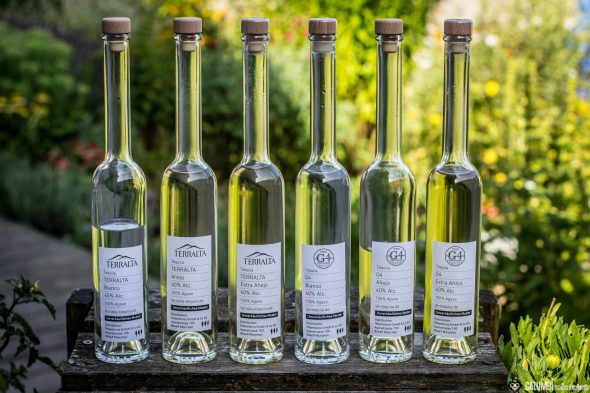 The explicit renunciation of additives is also worth mentioning – even within the actually permitted scope, the use of sugar colour is avoided, so the colouring is exclusively due to barrel maturation.

For me, Reposado variants are especially interesting when tasting tequila neat, which is why I will examine them in more detail in the following. As an example I have also chosen a Blanco (G4) and an Extra Añejo (Terralta). However, I can tell you that also the qualities not covered in detail here with tasting notes were able to convince me. For this purpose, there is also a suggestion for the use in cocktails below (where I have used two of the other qualities). 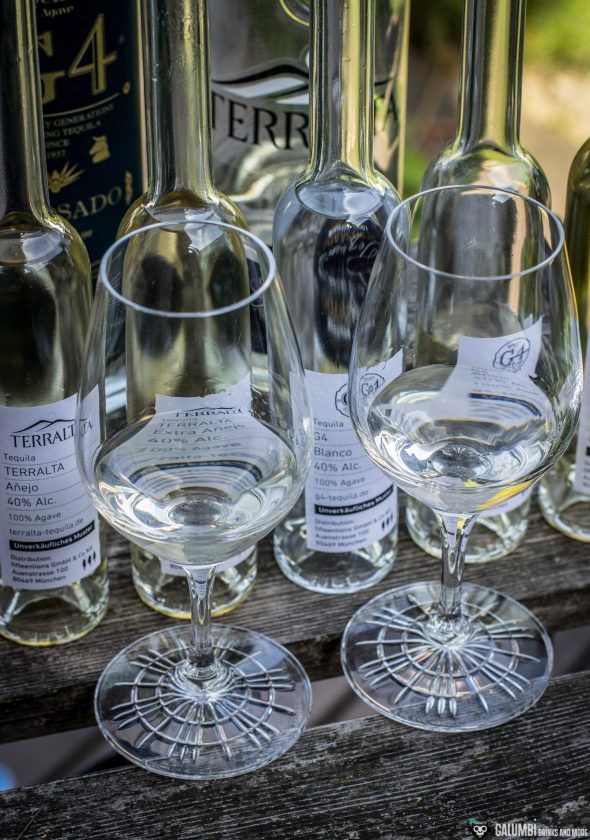 Aroma: An appealing Blanco with mineral and spicy-fresh agave aromas, somewhat milder compared to the Terralta (which I do not list separately here but used in a drink), nonetheless definitely on the aromatically generous side in the overall spectrum of Blancos. Spices are opening their way over time, typical white pepper with greenish wood notes, then some cardamom and a hint of vanilla. The alcohol is perfectly integrated. Those who stick to the cliché of “sharp” tequila should try a G4 Blanco!

Taste: Vegetal notes of green wood (with hints of green apples) and grass, an idea of meadow flowers and a little white pepper. Over time, a subtle vanilla cream emerges, caught by an idea of salt.

Aroma: Typical agave notes stand out immediately, and from the very beginning there is an aromatic pepper alongside other spices and herbs that are difficult to isolate, however with thyme standing out clearly. An idea of rosemary in the background combines with delicate eucalyptus, crystal salt and a pinch of pimento.

Taste: I like the Terralta Reposado very much on the palate. Beautiful and fully aromatic Agave and also here a spicy, white pepper is accompanied by a fine sweetness, which however rather stands back behind greenish-woody and herbaceous tones. Here, too, I find thyme, pimento and a hint of eucalyptus. This Reposado shows corners and edges in a good and desired way, a skilfully made tequila.

Aroma: Compared to the Terralta Reposado, it is immediately noticeable that this one is less angular and rough, but with a more pronounced honey sweetness. Behind it are spices and herbs (cinnamon, fine vanilla, again some thyme, a hint of anise), but also fennel, which reminds of fennel tea. Over time vanilla becomes more and more present, which also distinguishes it completely from the Terralta Reposado. Greenish tones are also present, but only very weakly. Maybe I would have guessed an Añejo here at a blind tasting.

Taste: Clearly softer, milder, with honey sweetness before fennel and herbs (thyme and heather), in addition more vanilla (almost already associations of caramel). But also the agave is present, earthy, full of character with white pepper (very subtle). My suspicion of an Añejo would also be supported by the palate, even if it is certainly the result of the contrast to the Terralta – on its own, the G4 Reposado still offers too much Agave with too few oak notes to really be recognized as an Añejo. The alcohol is incredibly well integrated.

Finish: medium-long to long, also very mild in the finish.

Aroma: An expressive nose full of warm tones: vanilla and caramel notes, honey (especially thyme honey), figs and associations of cinnamon and leather are combined with slightly fresher notes, mainly from the agave. Here, I find some green hay, lemon grass, bamboo and a hint of “garden pond” (I don’t know how to better describe this humid-warm impression). Very complex and appealing.

Taste: The palate is dominated by woody and spicy tones, which are quickly caught by sweet caramel and honey. With the time it goes more and more in the direction of vanilla pudding (which often happens to me with matured tequilas), but also remains appealingly multi-layered. Here, too, there are earthy notes. 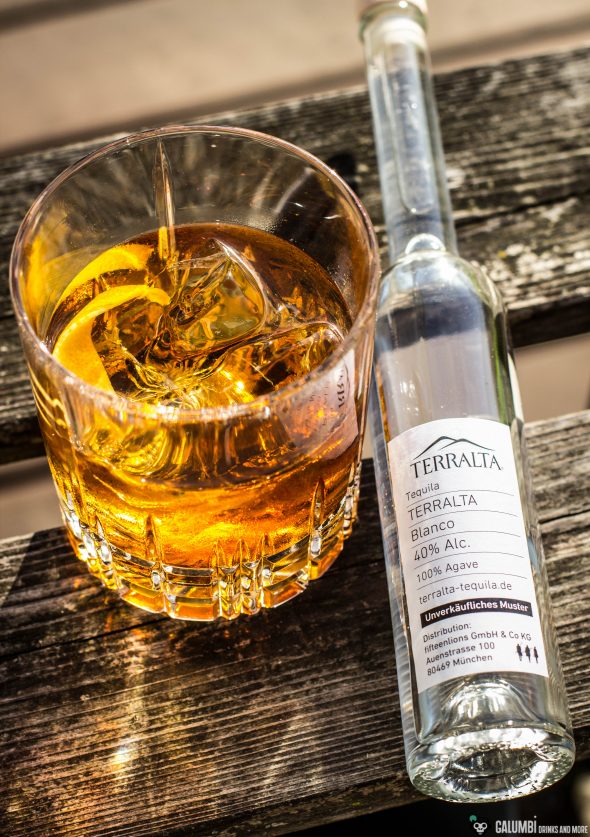 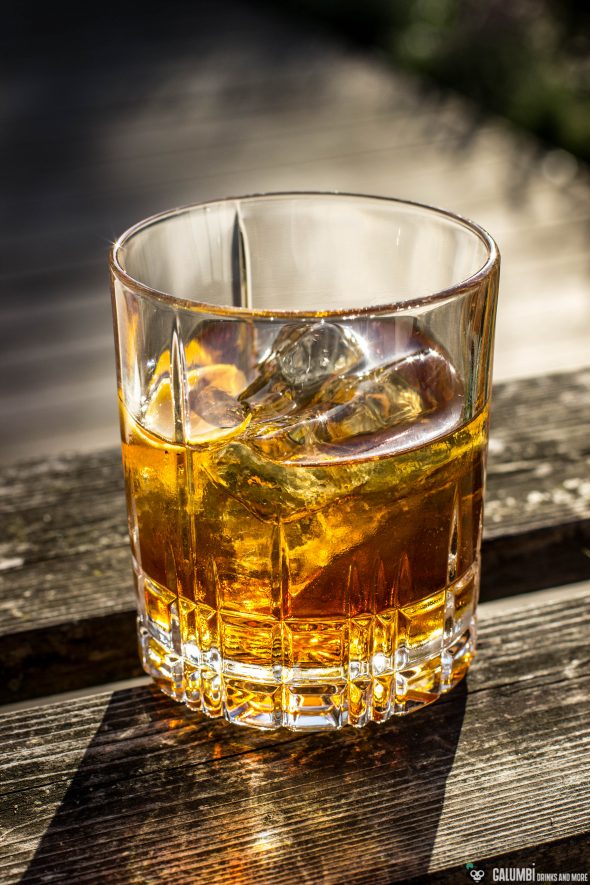 I would also like to introduce two cocktails here. On the one hand a kind of distant Negroni relative, which clearly aims to please friends of bitter drinks (like me). But I didn’t want to create a niche cocktail, but kept a certain “mass compatibility” in mind. So it’s not a bitter drink that can only be served to bitter-geeks. But if you think a Negroni is too bitter, you should keep your hands off it. It might seem odd to you to put 1 cl of Lemon Bitters in a drink, but it’s a wonderful fit. The drink is called Fourth Taste Harvest. 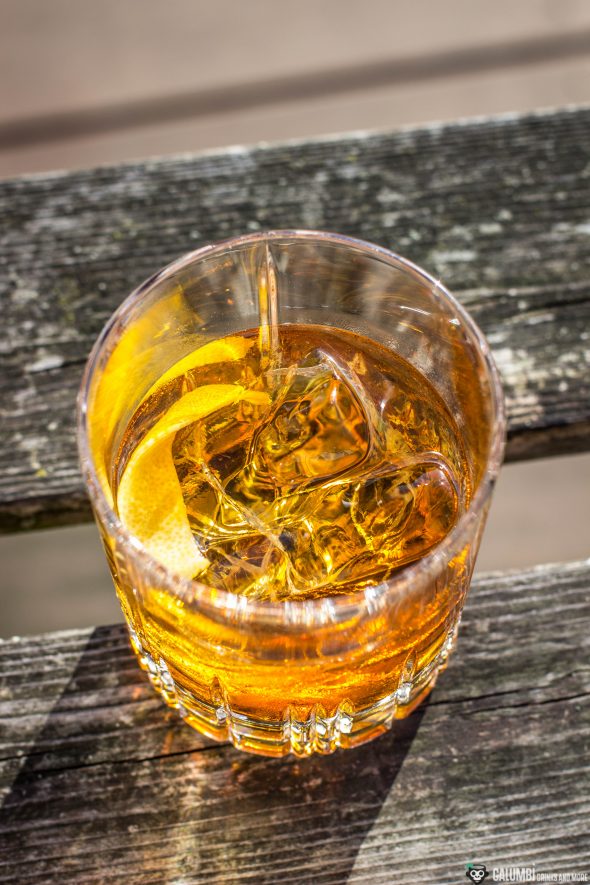 Preparation: Place all ingredients in a glass filled with solid ice cubes and stir briefly. 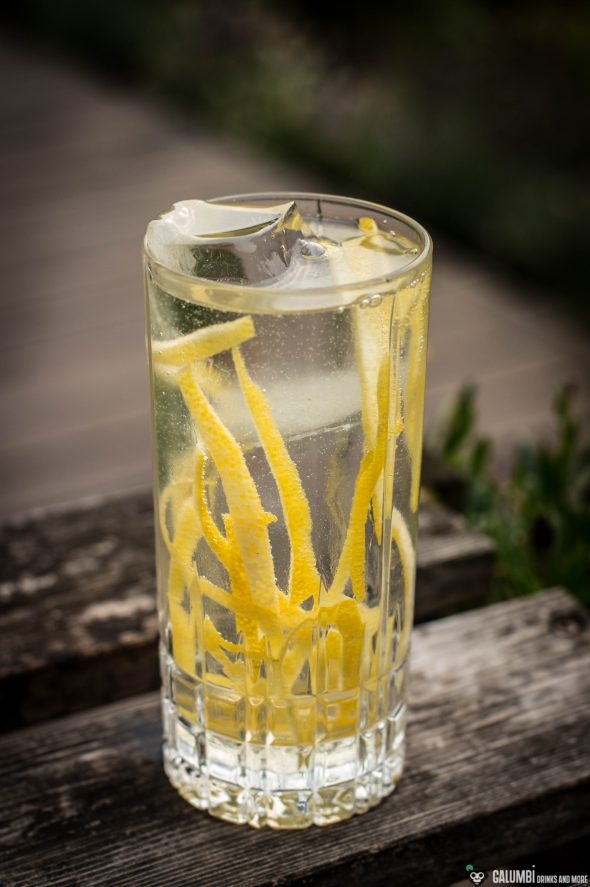 The second drink is based on a drink called Tequila Highball, which I once discovered on bonappétit.com. In the end not much more than a tequila-based collins with elderflower syrup and many zests. I liked the things with the zests (more for optical reasons), but didn’t want elderflower syrup in my drink, but instead some aromatic lemon sweetness. So I used Oleo-Saccharum (see below) to give the drink an intense aromatic lemon note in combination with lemon juice. Since I like this version much better, I decided to call it Improved Tequila Highball. Please don’t be miffed about this, dear Bonappétit team. 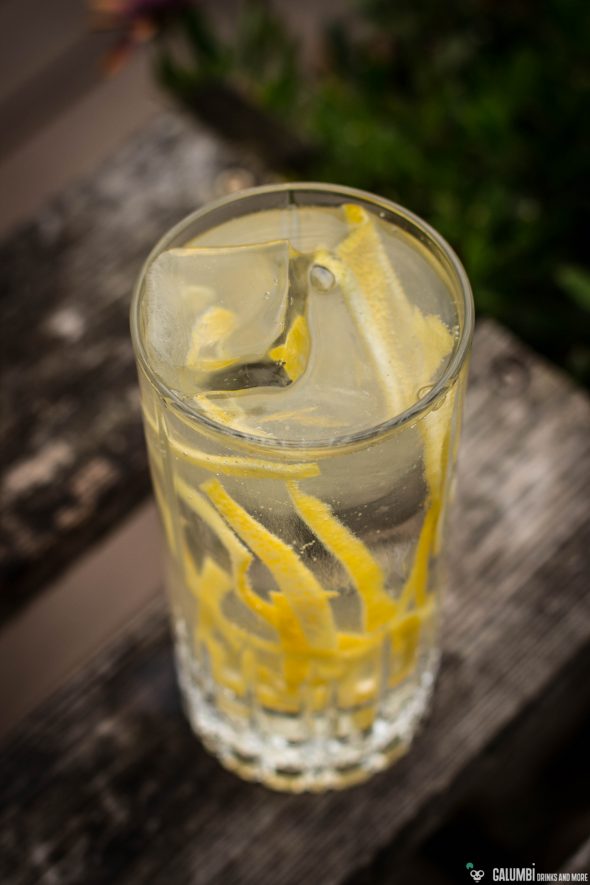 Oleo-Saccharum: Peel the skin off ten lemons (yes, 10 indeed, sorry) with a peeler all around and put them into a vacuum bag. Finally mix with four heaped tablespoons of sugar and vacuum the bag. Leave to rest for 12 to 24 hours. Then cut open and drain the oleo-saccharum (an oily syrup that has formed) and store in an airtight container. It lasts at least several weeks.

Preparation: Although this drink contains lemon juice, no shaker is used! Simply pour all ingredients except the soda water (but including the zest) into a highball or long drink glass, fill the glass with ice cubes, pour in the soda and stir carefully a few times. 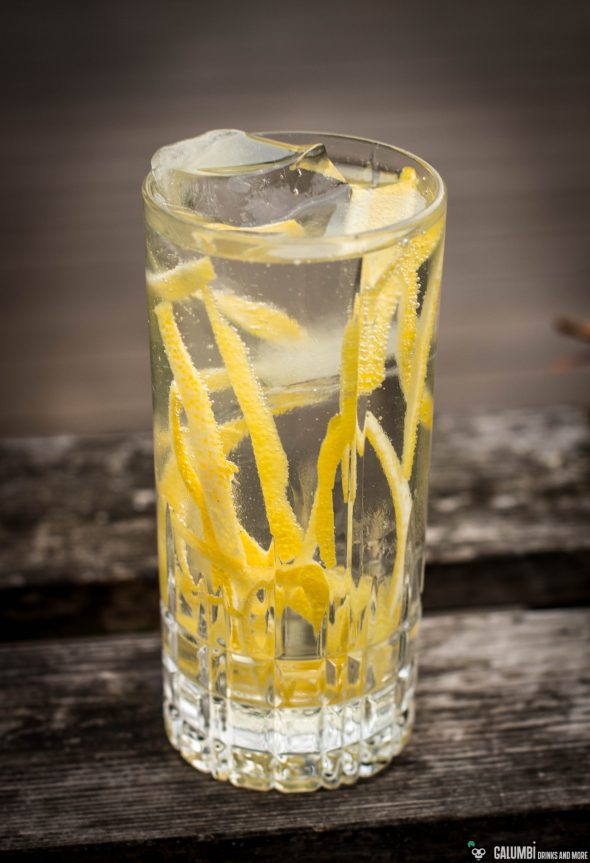 *The fact that these products (which partly contained only of leftovers) have been sent to me free of charge for editorial purposes does not – in any way – imply any influence on the content of this article or my rating. On the contrary, it is always an indispensable condition for me to be able to review without any external influence.