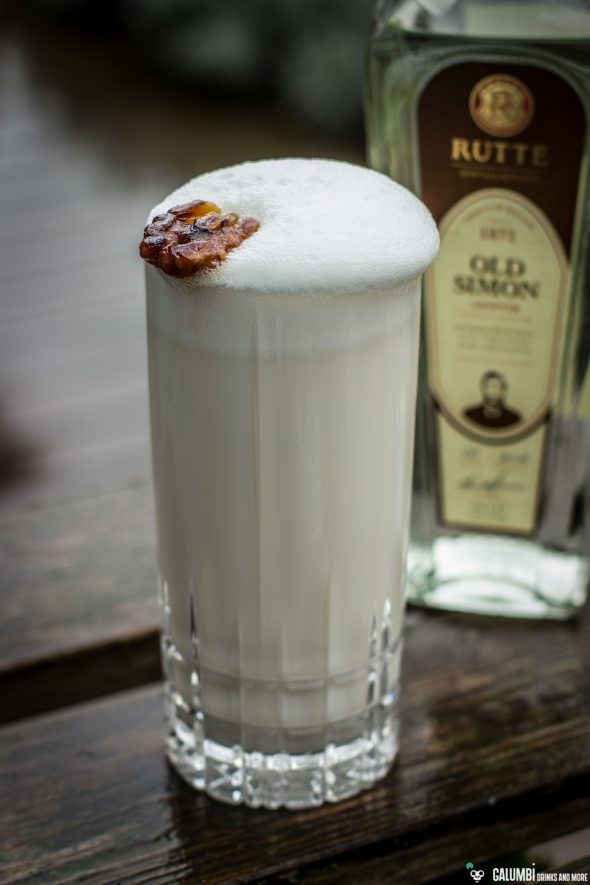 With more than a decade of unbroken enthusiasm for gin, the ancestor of the British juniper distillate is increasingly coming to the fore. And this is no other than the genever from the Netherlands. When English soldiers came into contact with this spirit during the Eighty Years’ War, the basis for the later development of gin on the island was laid. However, the whole story has been told so often that I don’t want to go through it again today. (provided test product)*

Instead, I want to concentrate on a bottle of genever that I want to put to the acid test. I’m talking about the Old Simon Genever from Rutte. The Dutch manufacturer Rutte was already founded in 1872 (nonetheless long after the Eighty Years War) and to this day the distillery in Vrieseestraat, Dordrecht produces Genever, Gin and other liqueurs. (If you should be able to read German language, at this point I have to recommend a very well-researched article about the history of Rutte from my blogger colleagues of Bar-Vademecum). 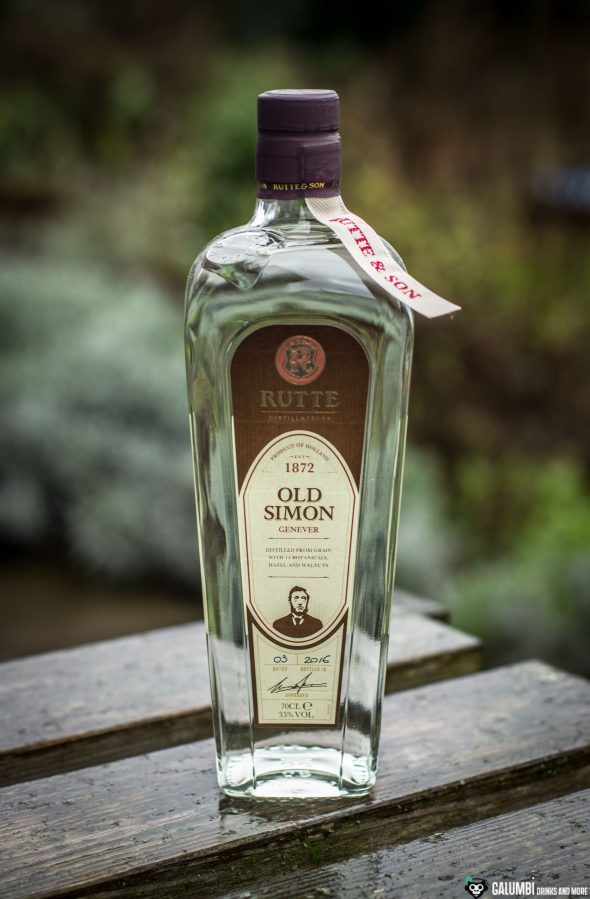 Who now suspects some kind of Old Tom Genever variant due to the name Old Simon, is not quite right. Rather, the name goes back to Simon Rutte, who was the founder of the family company. Rutte wanted to pay tribute to their founder with this bottling (and of course there is once again the marketing story of the old recipe of the founder – it may be true, but perhaps it is only just another story of the old recipe found somewhere in the cellar).

The Old Simon Rutte, bottled with an ABV of 35%, was manufactured with some interesting “botanicals”: in addition to classics known from gin such as angelica root and coriander (and of course the obligatory juniper), nutmeg and celery were used here. In addition to that, they also used a composition of roasted walnuts and hazelnuts, which I personally find very promising and exciting. Accordingly, I can hardly wait to find out how much of it I can find in the tasting. 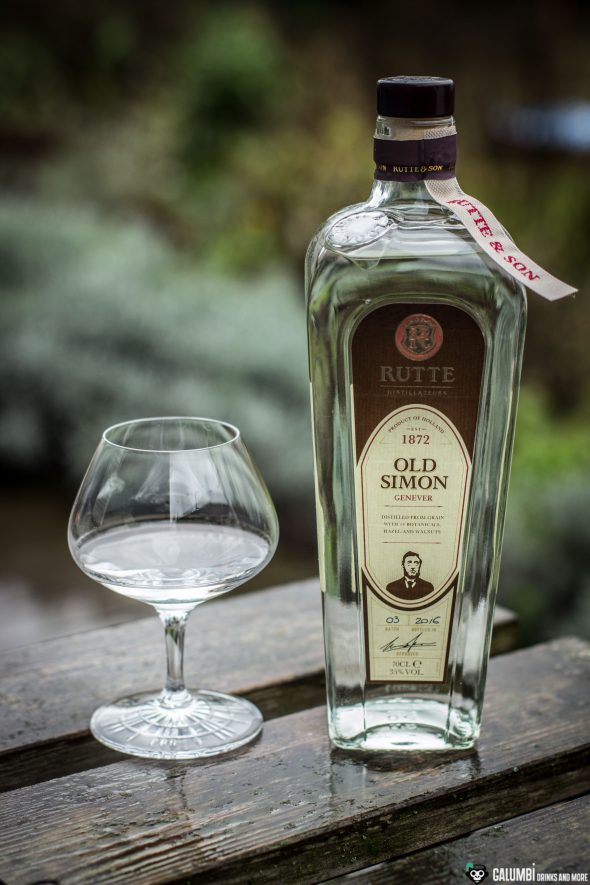 Aroma: On the nose, immediately there is a beautiful and rich malt note (Genever is made from malted barley or rye, the so-called Malt Wine), which immediately combines with juniper. The influences of walnuts and hazelnut are abundantly clear, along with a mineral note, a little bit reminiscent of silica. Over time, some pears also come through and a subtle honey sweetness rises.

Flavour: spices with notes of malt and rye, juniper, lots of nuts and a little liquorice. The Rutte Old Simon has rather warm taste tones and again a hint of pear. It offers a very beautiful alternative to a gin.

Finish: medium long, with nuts and associations of pear compote. 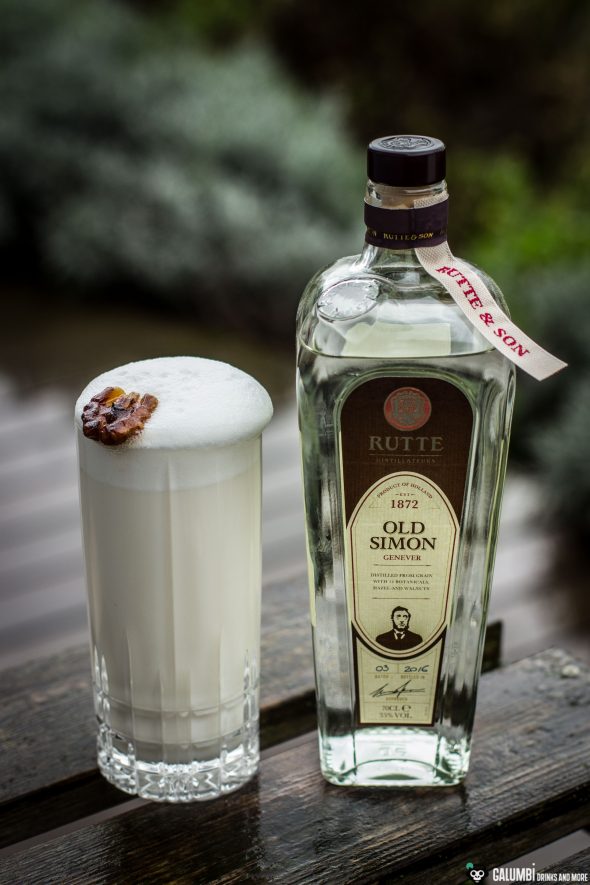 Of course, such a nice genever is no less suitable for the preparation of cocktails than a solid gin. And here I have decided for something special that will also fit a little bit into the Christmas season. I was inspired by the famous Ramos Gin Fizz, which I really like to drink. However, I changed the flowery lightness of the original a little bit more into the direction of nuts and herbal tones and varied it with a honey-walnut syrup and some D.O.M. Benedictine. I really like the result and want to recommend it as a wintery variation of the Ramos Gin Fizz. The famous Simile about Ramos Gin Fizz, “Like drinking a flower”, inspired me to simply call this drink “Like Drinking from a Nutshell”. 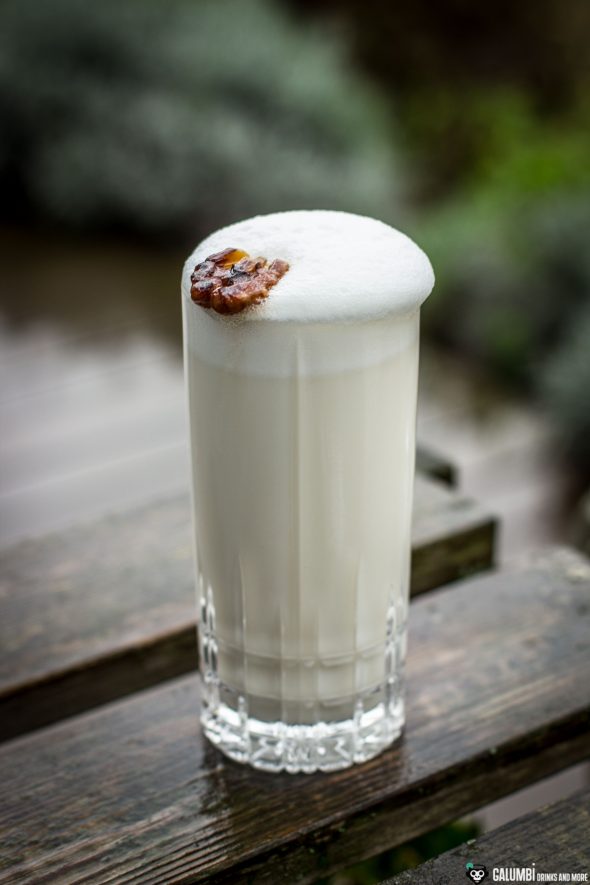 Hony-walnut-syrup: First, gently roast some walnuts in a pan until slightly brown. Then add double the amount of honey compared to the walnuts and let briefly caramelize. Then add water in the same proportion to the honey and let everything simmer until a syrupy consistency is obtained. Take out the nuts and filter out any particles through a sheet of muslin at the end.

Preparation: First, add all ingredients except the soda water into your shaker and do a vigorous dry shake without ice (alternatively use a milk frother to froth it up a little). Then shake again vigorously with ice for about 2 minutes (or for 12 minutes according to the original recipe of the Ramos Gin Fizz). Pour into your pre-chilled glass and carefully top off with soda water while simultaneously stirring gently with the bar spoon to form a voluminous froth.

Garnish: none (optionally a candied walnut from syrup production) 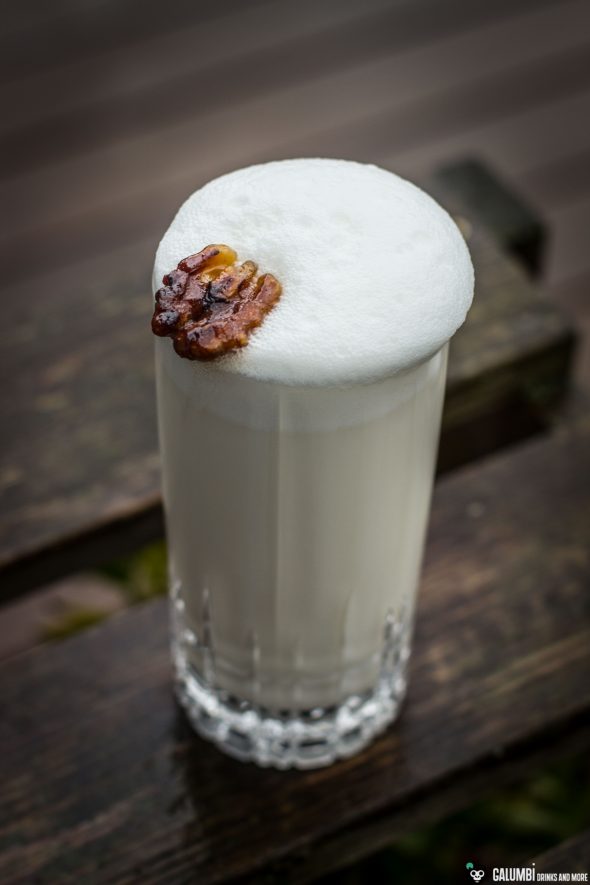 One thought on “Rutte Old Simon & Like Drinking from a Nutshell”