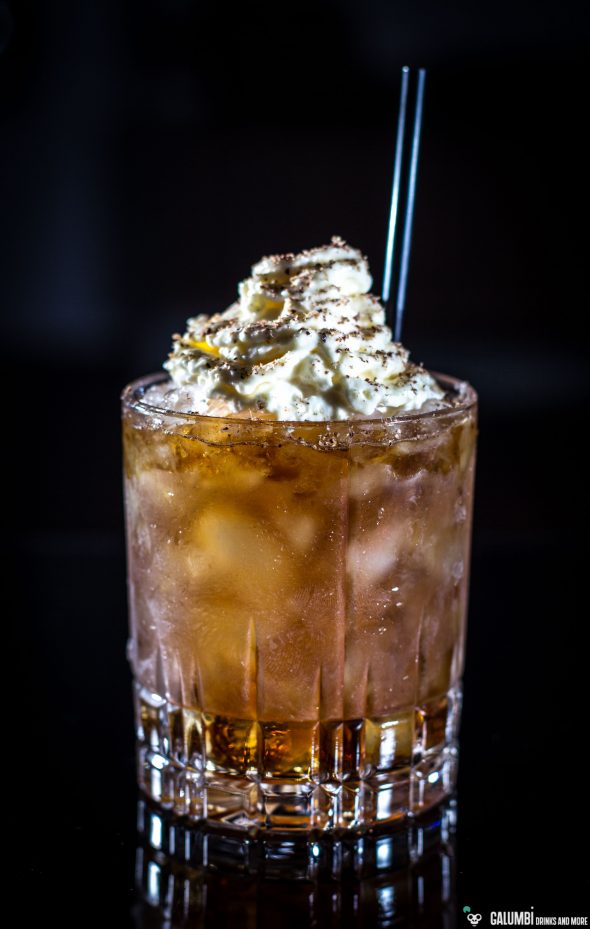 With the Cardenal Mendoza Clásico Solera Gran Reserva I did present a representative of the category of Brandies a few days ago. More precisely, it was a Spanish Brandy de Jerez. Personally, I appreciate Brandy very much for its flavor profile, which is very much in line with my personal taste, and against this background, I am particularly happy today to introduce an even more noble representative of this genre. (provided test product)*

Whether the Cardenal Mendoza Carta Real (that’s the royal name today’s Brandy listens to) can also keep its quality promise, remains to be seen. The expectations are certainly high. With a price anywhere between 60 and 80 euros, I guess high expectations are well justified. But what exactly is it that we have here in front of us? For background information on Brandy and a short introduction into the matter, I would like to refer to my above linked article on the Cardenal Mendoza Clásico Solera Gran Reserva. However, I do not want to withhold detailed information on this particular bottling. With an ABV of 40%, the Cardenal Mendoza Carta Real is bottled at a pleasingly high-proof for a Brandy de Jerez and the “Solera Gran Reserva” indicates an average age of at least 10 years (“average age” as we are dealing with the rather inaccurate solera technique – inaccurate at least when it comes to precise ages). However, the Cardenal Mendoza Carta Real exceeds this minimum age by far: the manufacturer speaks of an average age of over 25 years – that’s a proud age indeed! 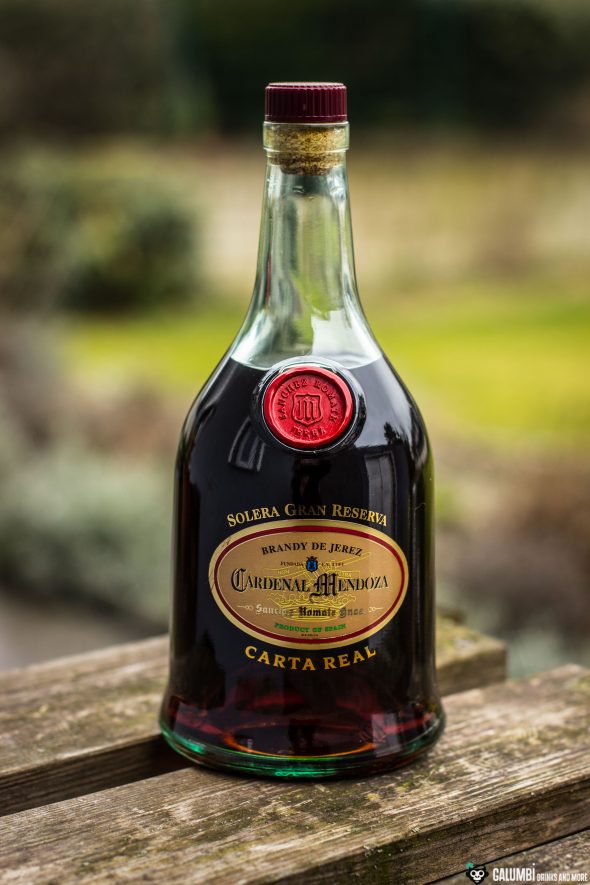 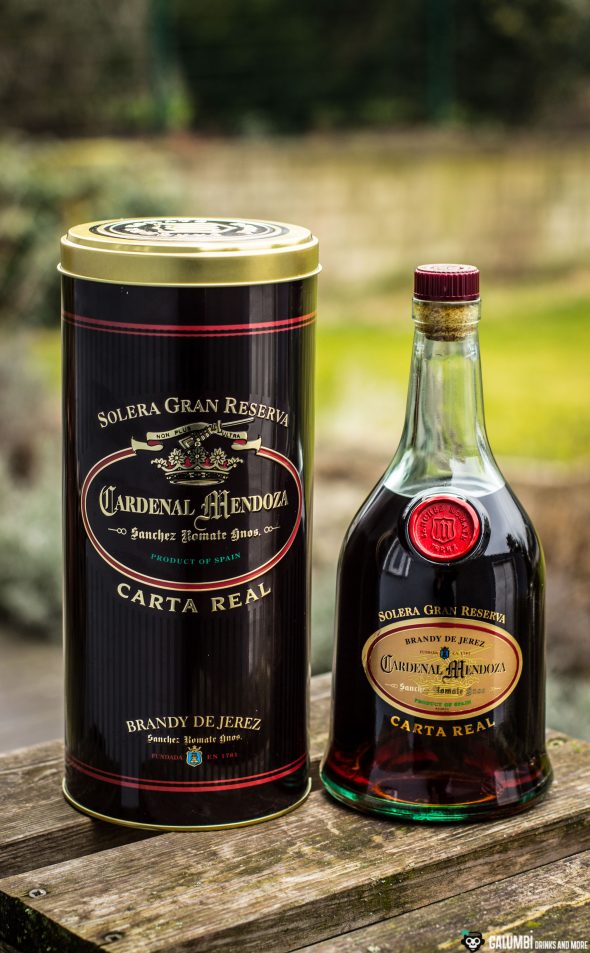 (If it were for example Scotch whisky – and therefore not a distillate, which matured in a solera process – we would probably have to triple the price.)

The origins of this bottling date back to 1981, when the family company Sánchez Romate Hermanos celebrated its 200th anniversary. At that time – at least that is the marketing story of this bottle – a special supply of Brandy was put aside and left in the barrels for over two decades. In contrast to the Cardenal Mendoza Clásico Solera Gran Reserva, a significantly larger proportion of the barrels previously contained Oloroso sherry (especially old Olorosos), while the Pedro Ximenez share was reduced. “Carta Real” – the royal letter of recommendation – was created in memory of a royal dinner with King Alfonso XII., which took place in 1900. At that occasion, wines from the house of Sánchez Romate were served at the royal court.

But how will such a premium Brandy perform in the tasting? 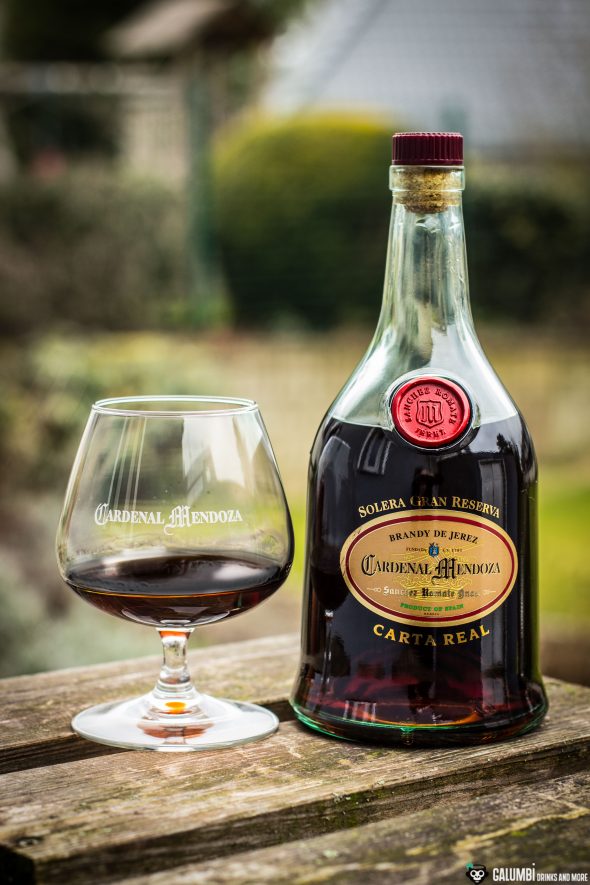 Aroma: Something ambitious, complex and mysterious rests in the glass here. While the Cardenal Mendoza Clásico still came up with clearly salient single aromas, the Cardenal Mendoza Carta Real appears older, more mature and more complex. The sweetness of Pedro Ximenez has actually receded into the distance, but plum compote, not so sweet sultanas and pastries come to light. Fine spices (vanilla, cinnamon, nutmeg) go hand in hand with oak notes and blend beautifully into the aroma profile. The soul of sweet Oloroso sherry is floating above everything else. A very appealing Brandy! You can easily spend a lot of time reflecting only on the aroma of it.

Taste: The Carta Real keeps on the palate what the very nice aroma already promised: A dark and heavy sweetness that is less pronounced than in the Clásico; it is reminiscent of dark honey, caramel and stewed fruit. Again particularly over-ripe plums stand out, in addition aromatic sultanas and spicy oak. This brandy is really a marvelous one!

Finish: long, warm and sweet with Oloroso sherry and spices

Such a wonderful distillate calls for a thoughtful use in a cocktail. To pair it with too many side tones (or even an overwhelming counterpart) would simply be a shame. And since I wanted to emphasize the beautiful raisin, plum and compote notes, I opted for an Old Fashioned-style drink, which adds some cinnamon, black walnut and some French Calvados. The cocktail listens to the name Mendoza’s Indulgence (whether it is the joyful kind of indulgence or the religious one is up to you). 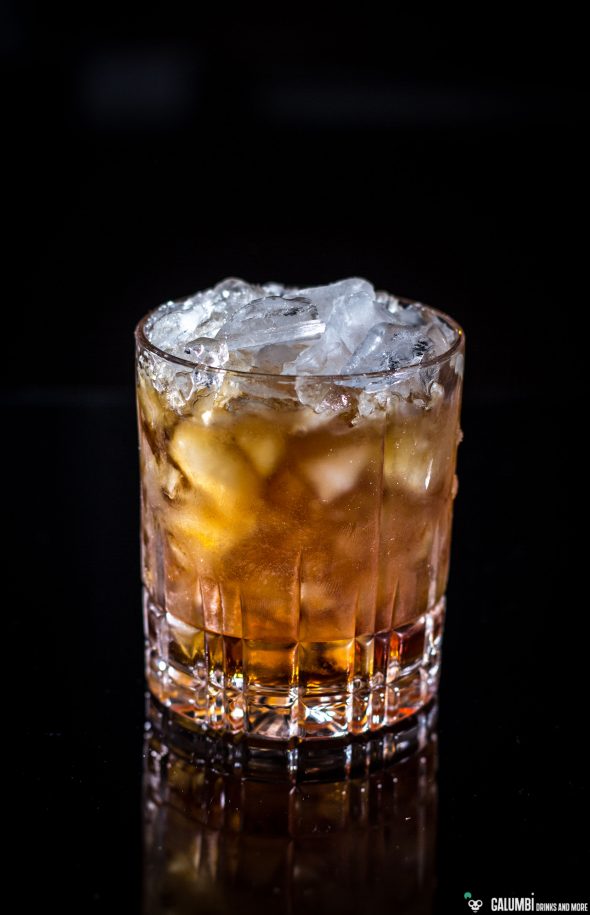 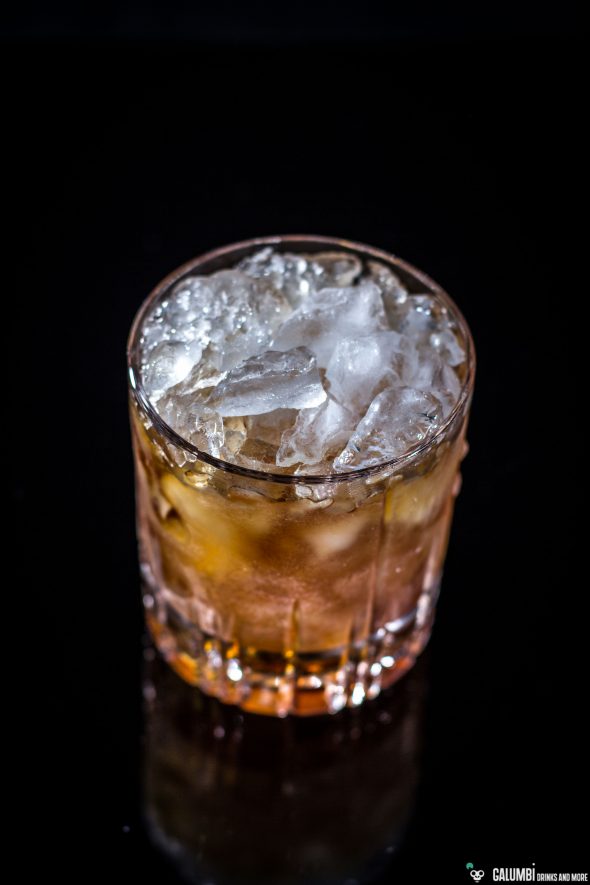 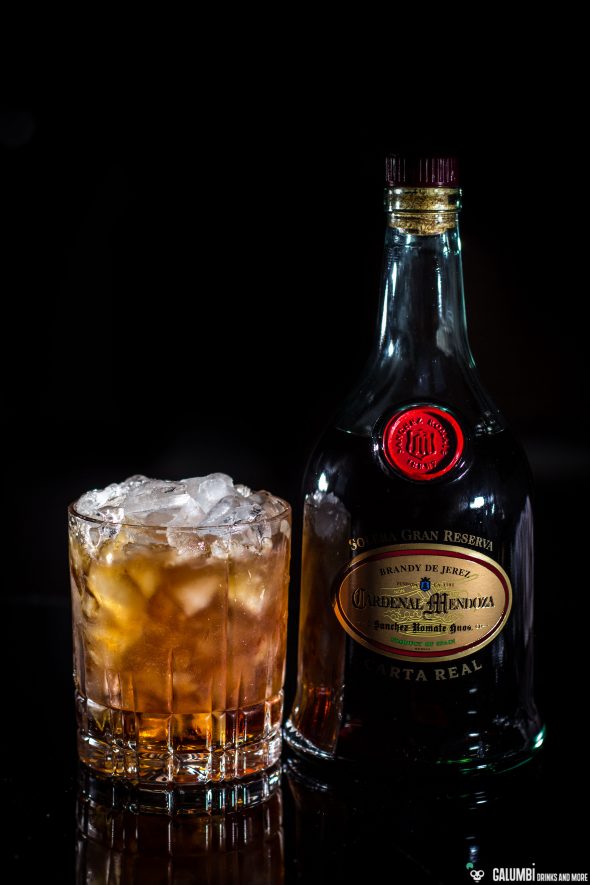 Sounds tempting? It is – and certainly worthy of such a beautiful brandy! (Optionally, this cocktail can be served with a white chocolate, apricot and tonka bean espuma, which, of course, calls for some extra effort, but it’s worth it! Nonetheless, if that’s too much for you, just leave the Espuma away and you’ll still have a very nice drink!) 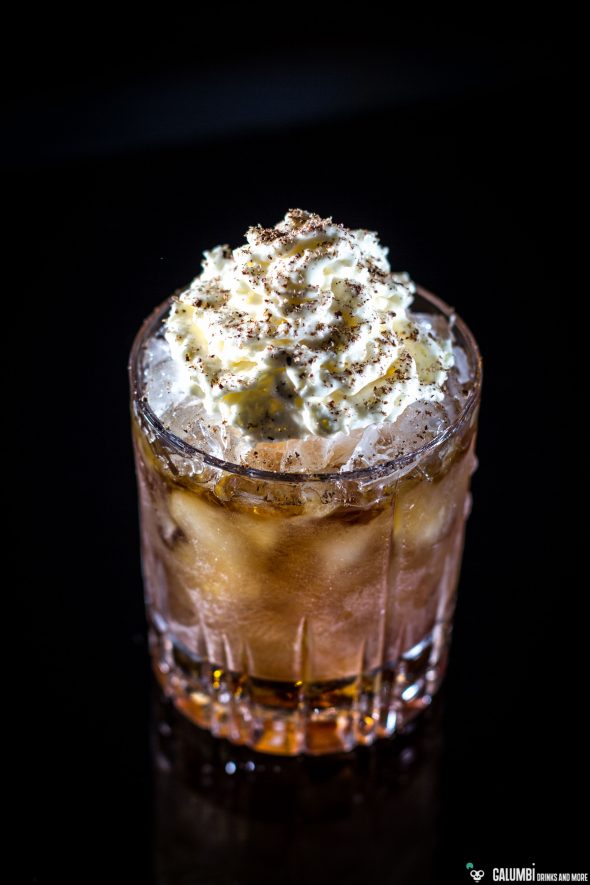 Royal Espuma: Melt 100 grams of white chocolate in a metal bowl floating on slowly simmering water. Stir in an egg yolk and an egg white and whisk until fluffy. Remove the bowl from the water bath and add 150 g of cream and 4.5 cl of white rum infused with dried apricots & Tonka (see below). Put it in a cream siphon and load it with two N2O cartridges. Place the siphon in the refrigerator until use.

Dried Apricot & Tonka-infused white rum: Add a small handful of dried apricots and about half a Tonka bean to 250 ml of white rum and let infuse for 48 hours. Then filter through a sheet of Muslin. Do not exceed 48 hours of infusing; otherwise, the Tonka influence becomes too strong.

Preparation: Add all ingredients into a glass filled with crushed ice and give it a stir. Garnish with Royal Espuma and nutmeg. 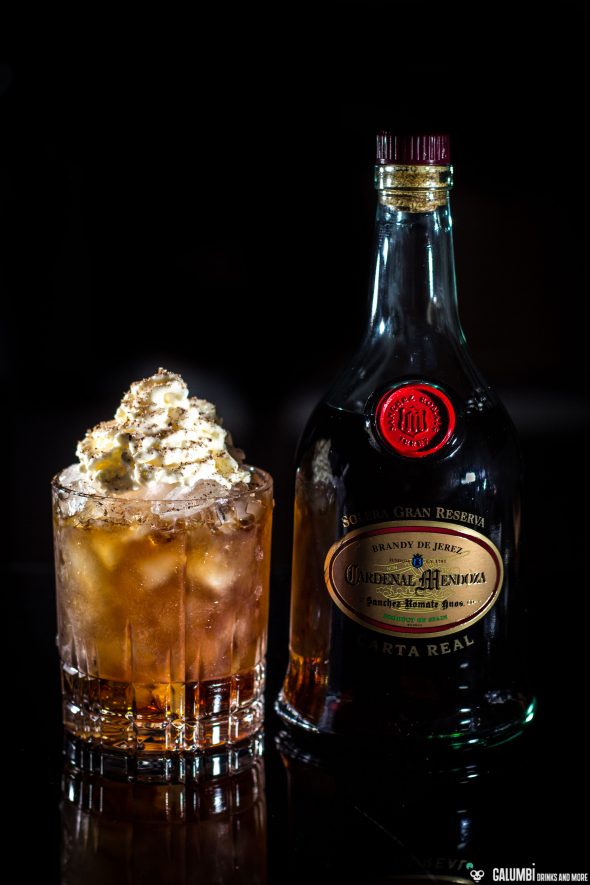