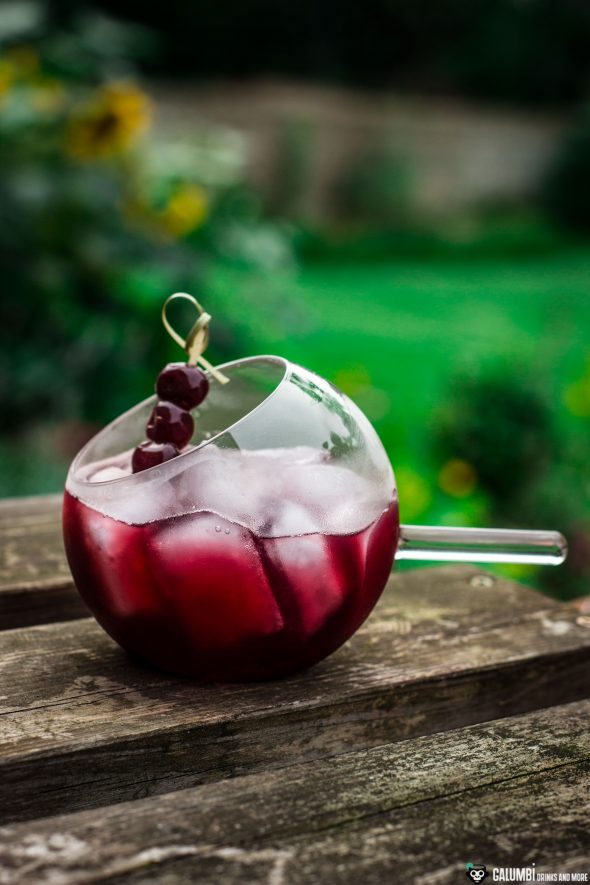 After a short weekend trip to Berlin I want to continue with a new cocktail and two related spirits today! If you should expect a “Berlin Special” or something like this, I must disappoint you. There are plenty of reports on the Berlin bar scene or articles with recommendations on this topic out there so I don’t want to launch just another article like that. But there is a really nice recipe in this article that has all it needs to please the crowds! (provided test products) 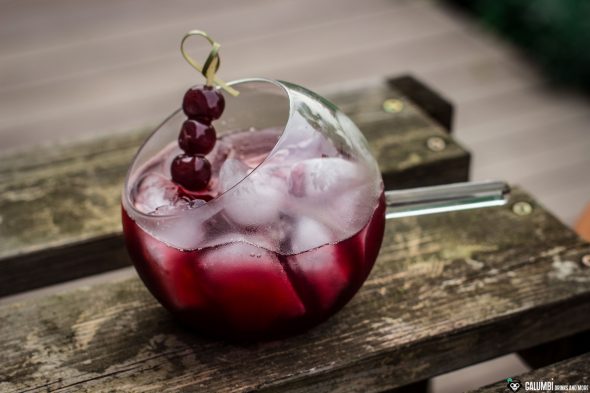 The cocktail I want to show you is not an entirely own creation but a variant of a not very conventional drink, which I discovered on Samantha Spector’s highly recommendable blog Saloonbox. Many months ago, I came upon a drink with the unusual name “Cheribundi Whiskey Smash”, a drink that combines American Whiskey with cherry juice, ginger liquor, Cola and Amaretto, and which made me very curious. (Cheribundi is the name of an American juice brand, which makes the cocktail’s name probably a little bit confusing for non-Americans.) I really liked the drink, but was not completely satisfied yet, which is certainly due to my personal taste preferences. I’m not really fond of Amaretto and although I have used a solid Disaronno, that could not change the fact that the typical Amaretto flavor in the cocktail simply irritated me. The ginger, on the other hand, was too weak and somehow the cocktail seemed a little bit too “flat-chested” to me. So I made some changes and re-balanced the cocktail so that I would now consider it almost perfect for me. In terms of whiskey, I decided to use a Cask Strength Wheat Whiskey, which I would like to introduce a little further below. Instead of a classic ginger brandy, I decided to use the Galgant (German for galangal) Cremelikör of the Prussian spirits manufactury, which’s hot & spicy characteristics work just perfectly here. And instead of adding Amaretto, I chose to try Mondino Stagionato, a barrel-aged Bitterorange-Amaro, which I will also describe down below. The latter is a very important ingredient because it ultimately changes the cocktail into a completely different drink with a distinctively different taste from the original. Because of more than one reason, the original name of the drink appeared not quite fitting any more, which is why I renamed it after a Morcheeba song: Blood Like Lemonade. (You can find the corresponding song down below as an implemented Youtube video.) 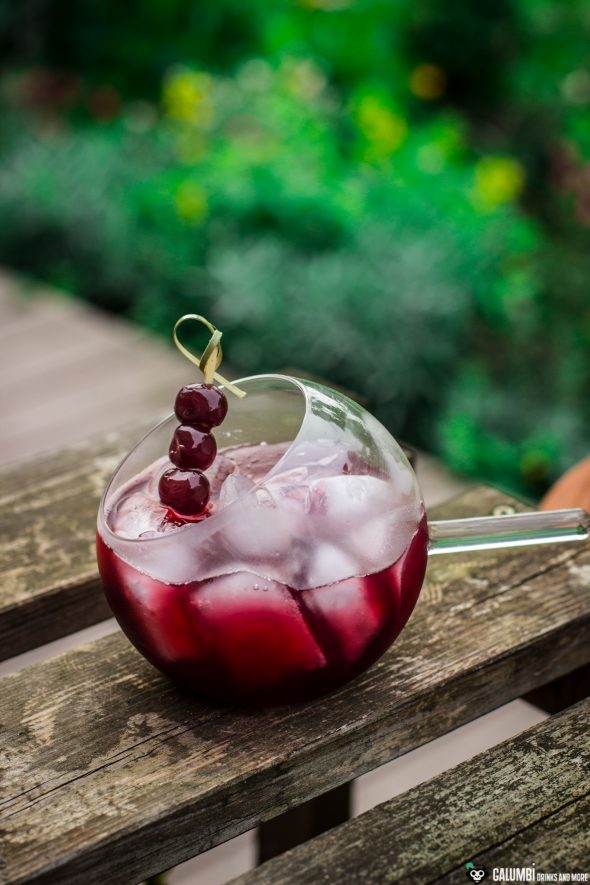 Preparation: First crush the Griottines cherries with the Muddler in your shaker. Then add the remaining ingredients except for the cola and shake vigorously on ice. Double strain into a glass filled with fresh ice cubes and top off with cola.

Glass: Tumbler (I opted for the Revolution glass by Jakobsendesign) 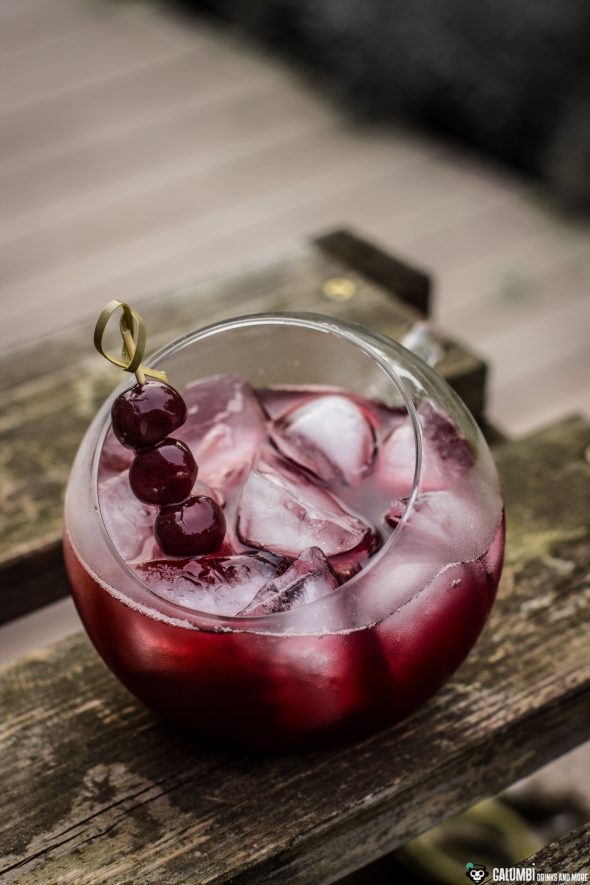 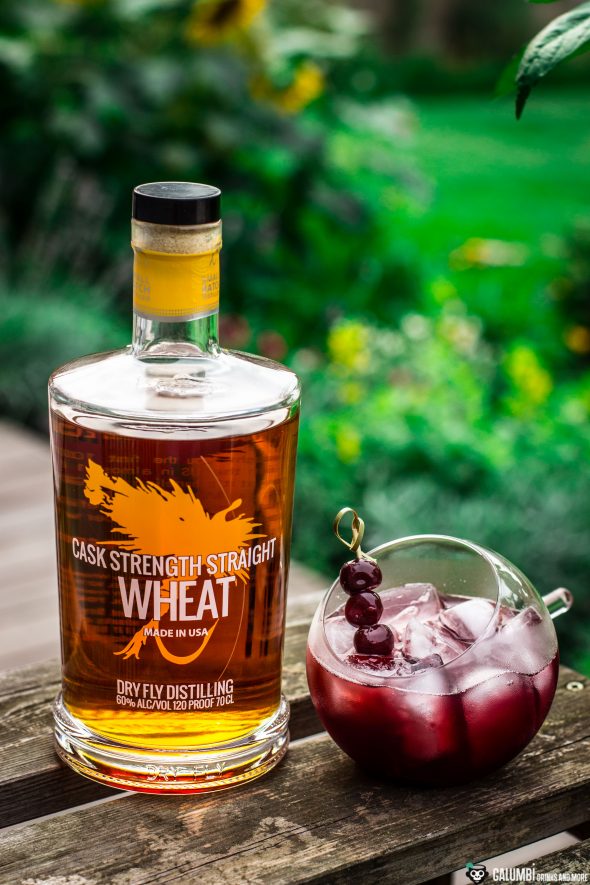 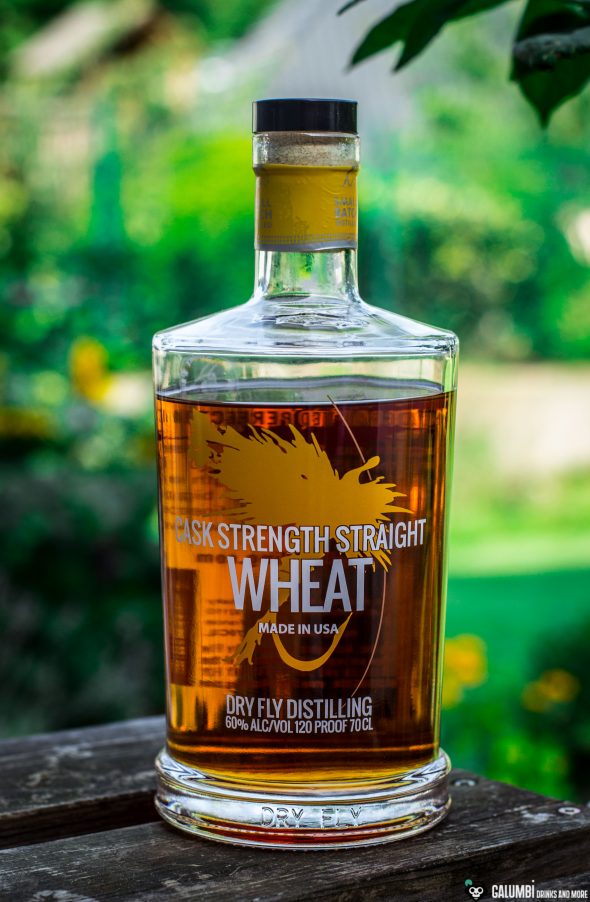 In addition to the cocktail, I also want to deliver some extra reviewing information about the Dry Fly Cask Strength Straight Wheat Whiskey and the Mondino Amaro Bavarese Stagionato. The Dry Fly Cask Strength American Whiskey comes from Spokane in the state of Washington (not to be confused with the US capital). There it is produced in a micro-distillery which was founded by the two nature and fishing enthusiasts Don Poffenroth and Kent Fleischmann in 2007. The distillery works with two “Christian-Carl” pot stills of German manufactory and they are fully dedicated to regional and sustainable agricultural products. So much for the slightly abbreviated marketing story behind the product. But what is quite interesting is the fact that one the one hand wheat whiskey is very common in the USA as a component of various blends, bourbons, ryes & co, but a 100% pure wheat whiskey has become truly rare due to its supposedly very mild flavor. So for many years there was no pure wheat whiskey offered on the market. After almost hundred years, Dry Fly brought back such a product at both 90 and 120 proof. And the whiskey I am reviewing here is the 120 proof version. It was taken directly from the American white oak casks in which it was previously allowed to mature. 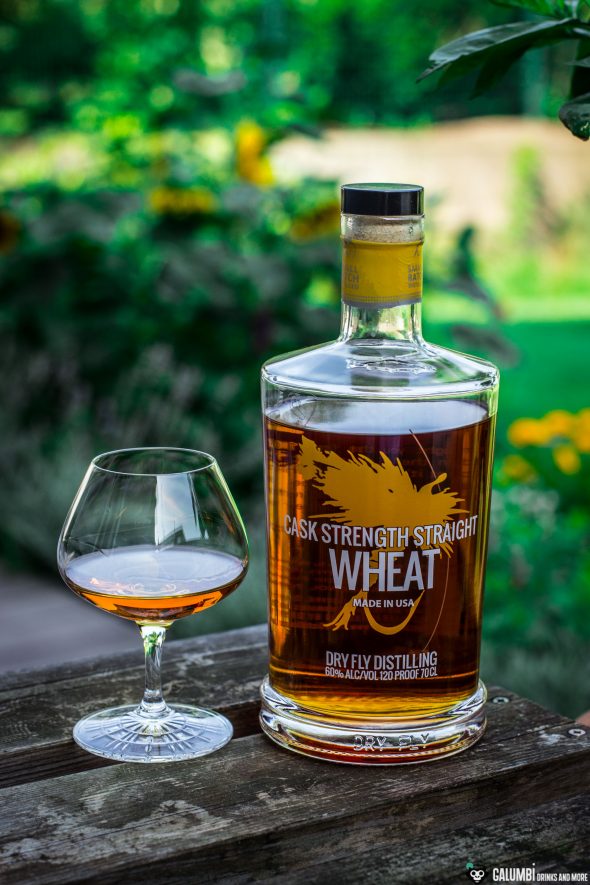 Aroma: The aroma obviously shows that we’re dealing with a whiskey matured in American white oak barrels, yet it differs from a typical bourbon! The vanilla is less intense, but there are distinct notes of sweet pastries, oak, some fruit (apples and pears), honey, lemon peel, subtle orange, cloves and coriander. A great game of flavors which is skillfully emphasized by the alcohol.

Taste: Intensive, aromatic, much more than I would have expected from a pure wheat whiskey! The alcohol is pleasantly gentle, I would never in my life have guessed that this is a 120 proof whiskey! Spices, cake dough, cinnamon, oak, raisins and vanilla are tempting the palate. Wow, this is really a great whiskey! With some water, the oak is somewhat strengthened and the taste becomes a little more bitter and spicier, but not less complex. Very nice, I really like it! 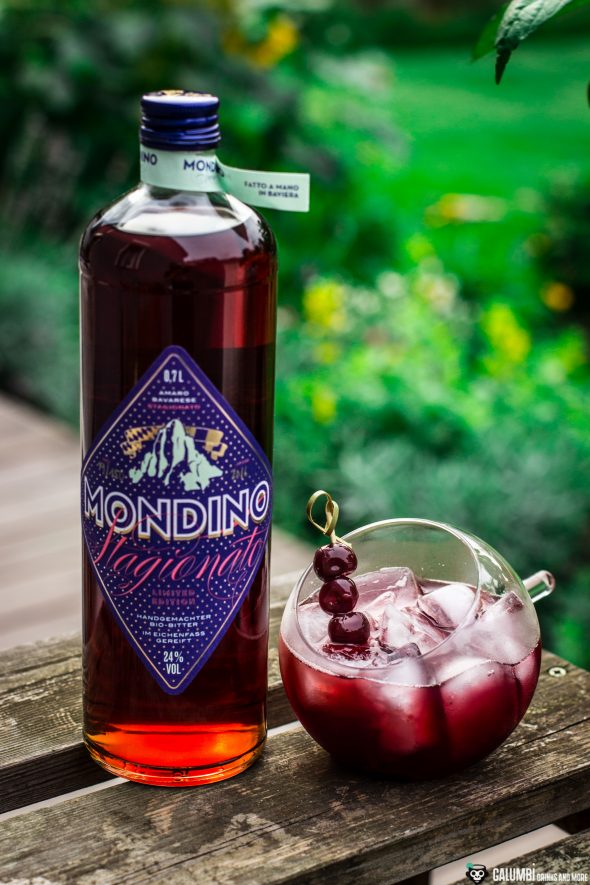 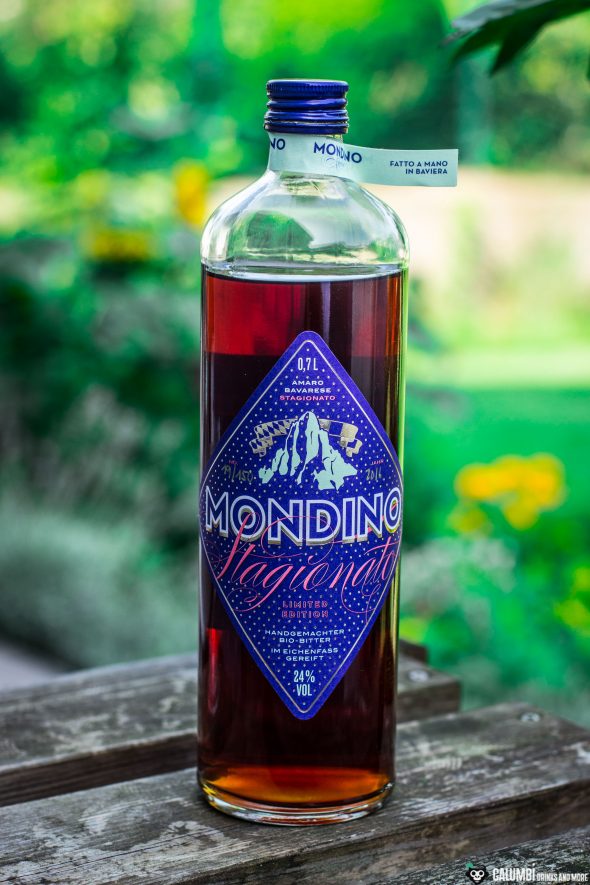 But how does the Stagionato taste? Are there significant differences because of the cask ageing? 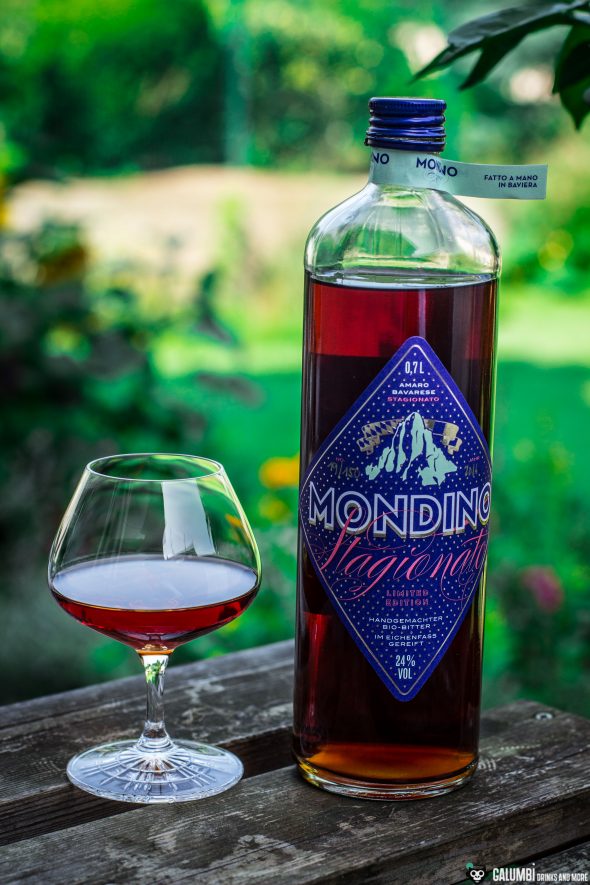 Aroma: The Mondino Amaro Bavarese is immediately recognizable: gentian root, oranges, beautiful bitter tones, subtle rhubarb and the fresh berry notes in the background – all the complex aromas that convinced me of the original are once again there. The Stagionato is bit more full-bodied and more aromatic, with oak tones and a spicy smell. I would not say that it is better, but also by no means worse than the flagship of the Mondino brand. Simply different and a little more “mature”.

Taste: The taste confirms the impression from the nose: In addition to the persistent and complex, bitter orange character, a fine sweetness with herbs, oak, some cloves, and a very pleasant vanilla occurs.