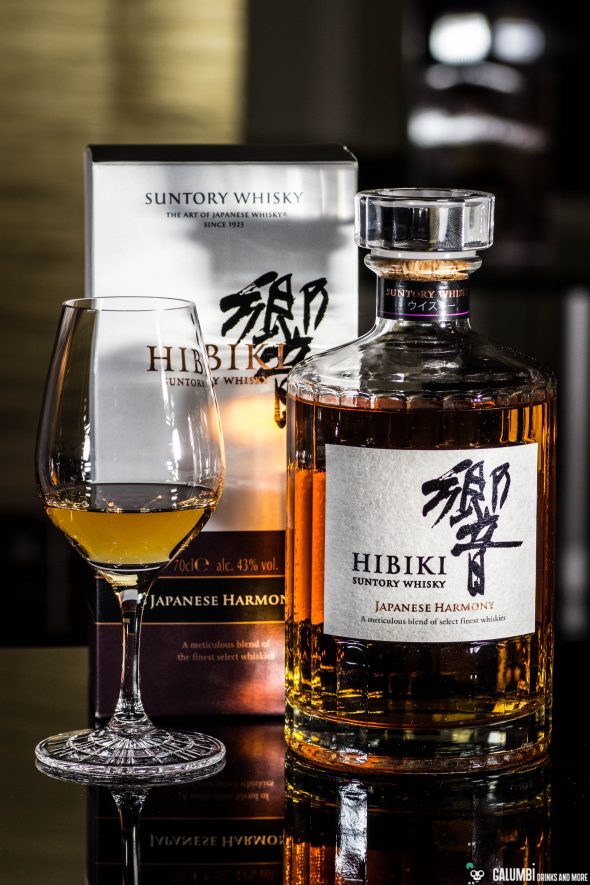 Today’s whiskey is a special one in many respects. Not only is it a whisky of special quality but it is also quite special for me because it reminds me of some very nice whisky experiences (not to say: revelations) I had in the past. Although this particular one entered the market not before 2015. Last but not least, it is also the youngest member of a whisky series that was one of the first I knew by name at all.

Everything started with the 2003 film “Lost in Translation” which really excited me at that time. I’ve always been a fan of Japanese culture and Sofia Coppola’s movie offered some humorous insights into present day’s Japanese society and it also was – despite a lot of criticism from Japanese people – one of the reasons why I later decided to travel that country. Nonetheless at that time I had no clue about whisky at all and only knew some very famous brand names like for example “Glenfiddich”, “Jim Beam” or “Johnnie Walker”. Perhaps the most famous scene in the film is the one about the absurdly comical commercial spot for “Suntory Whisky” which is actually meant as a tribute from Sofia Coppola to some experiences her father made in the late 70s. The protagonist of the film, Bob Harris (played by Bill Murray), is sitting on the set with a glass of whisky and a bottle in the background and is irritated by the programmatic communication problems that make up a big part of the movie’s essence. (below I’ve embedded the scene from Youtube).

Back then I wanted to know what actually “Suntory Whisky” is. And so I did some research and learned that Suntory is one of the big global players on the spirits market. In Japan they also produce and sell soft drinks, ice cream or even flowers (which I could also see for myself some years later in various kiosks in Japanese stations). Interestingly enough, the actual name of the whisky that was advertised in the film was not “Suntory Whisky” but “Hibiki” (in the film, as far as I know, the 17-year-old Hibiki was advertised). And this 17-year-old Hibiki became the first Japanese whisky I’ve tried when I later visited a fantastic sky-bar in Tokyo with a stunning view over the nocturnal metropolis (unfortunately I forgot the name of that place). But what I do remember is that I was absolutely stunned by the whisky. So I chose to take a bottle of the 12-year-old Hibiki home from Japan and I was also very impressed by this one. The Hibiki-series also won many international awards and so I was very excited about the newest and latest addition to the series. It is a NAS bottling (No Age Statement) but that is not really surprising due to the globally increased demand for whisky. 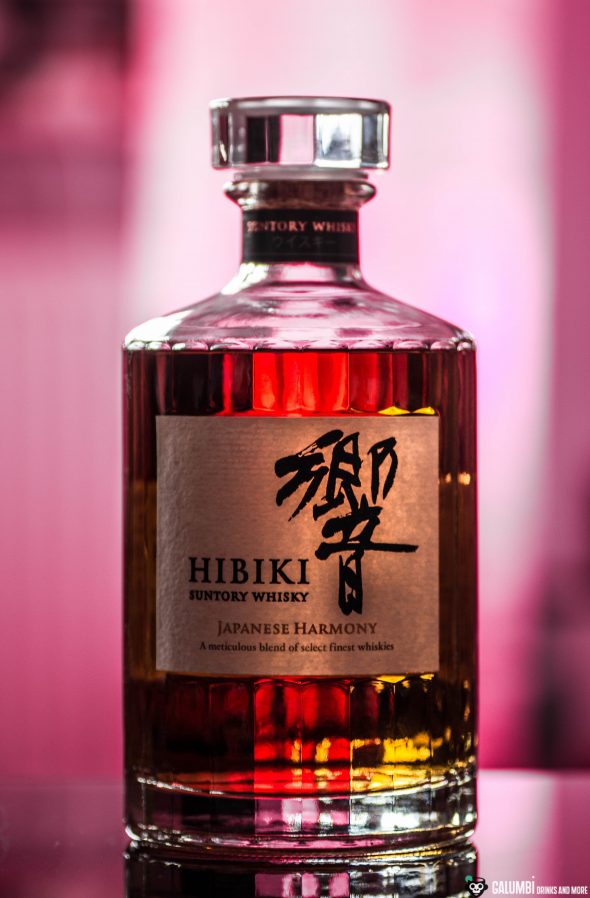 Hibiki is a series of blended whiskes, so the whiskys come from several distilleries and are not exclusively made from malted barley. Hibiki means as much as “resonance” in a sense of “harmony” and so you it is no wonder that they named the bottle that way. Before I speak about the content I would also like to briefly mention the bottle: For my taste it is one of the most beautiful bottles of whisky out there. A very classy-looking, rounded bottle with 24 facets representing the 24 Japanese seasons (I don’t want to list them here, hope you excuse that). There is also the label made from artisanal Japanese Echizen or Washi paper, which comes from the province of Echizen on the central north coast of the main island Honshu. Aesthetically an absolutely successful concept and beautiful symbol of Japanese cultural perfection.

The Hibiki “Japanese Harmony” contains whiskys from several Suntory distilleries throughout Japan: Yamazaki (here I’ve already written a few lines about the 10-year-old Yamazaki), Hakushu and Chita. These whiskys were allowed to mature in different types of casks, including both classical ex-bourbon casks, but also European ex-sherry casks and Mizunara casks from Japanese water oak. These are then married by chief blendmaster Shinji Fukuyo so that the soft and mild grain whiskys are combined with in parts slightly peated malt components to create a particularly subtle and perfect “harmony”. The taste of the Hibiki “Harmony” completely convinced me. Of course, it differs from its older siblings but despite it does not totally reach their level it is nevertheless an excellent whisky. And it is a blended one! So it earns my absolute recommendation for anyone who wants to approach Japanese whiskys. 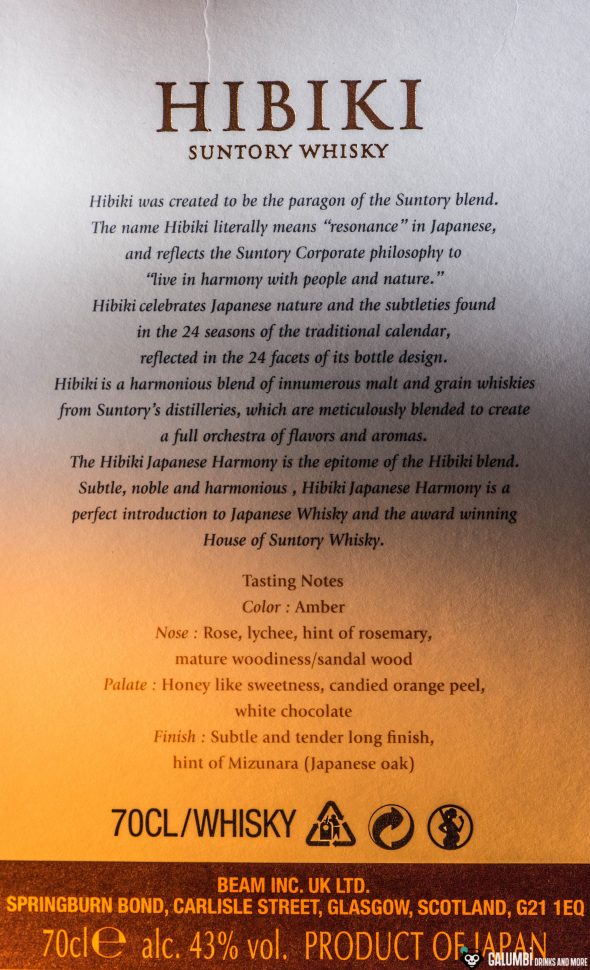 Aroma: On the nose the Hibiki Japanese Harmony immediately introduces itself with a complex sweetness which calls for a more detailed classification: Vanilla, sandalwood but also bright fruits and an aromatic honey. Perhaps actually Lychee, Orange, but I also believe to scent sweet plum wine. A not too dominant oak note mixes with very light smoke and very fine salt associations. Rosemary I do not find. All in all a great aroma that I could enjoy for hours.

Taste: Surprisingly prominent and quite tart oak tones are arising alongside an aromatic honey that immediately joins the oak. The vanilla is also there, swinging about a bit in the direction of Orange as you can witness it in many bourbons. Over time, the Hibiki Japanese Harmony increasingly starts to show its sweet side with fine chocolate (whether its white or milk chocolate I really can’t say). And again some sandalwood.

A really excellent whisky that definitely does the name Hibiki the appropriate credit. 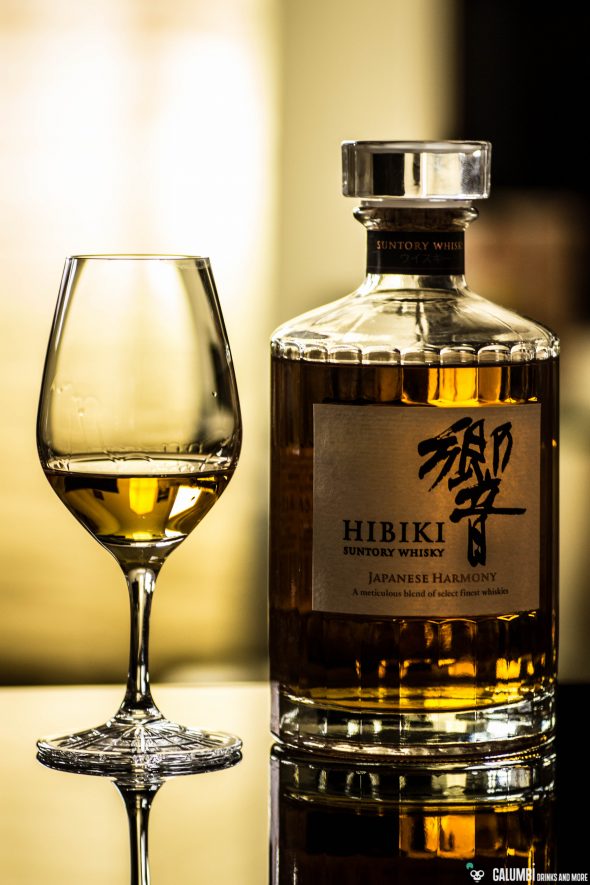 Buying sources: The Hibiki Japanese Harmony comes with 43% vol. and can be purchased in stores or online for usually about 60 euros.