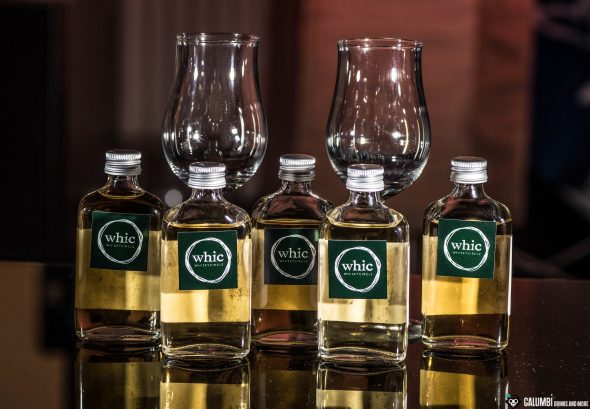 Whisk(e)ys have been the first spirits category I really became enthusiastic about. Well there is a small exception because that happened in the same days when I started to discover my passion for classic cocktails and my personal gateway was the most classic cocktail of them all, the Martini. Therefore in my “early days” of course gin and vermouth also played a certain role, but I spend much more time reading about whisky and of course tasting it. So today I would like to publish an article all about whisky.

The reason for that is the special opportunity to sample not just one, but several Scotch Single Malts of promising quality and to go a little more into detail in terms of nosing and tasting. The corresponding whiskys are independent bottlings from the German whisky-retailer Whic – Whiskycircle, which of course not only sells independent bottlings from self-acquired barrels but also offers the full range of Scotch and international whisk(e)ys. But nevertheless independent bottlings are often special because they give us an opportunity to get in touch with the unique character of a distillery besides the standard bottlings and they also allow the independent bottlers to add their own signature since they alone can decide how long each whisky is allowed to mature inside of the casks. Altogether an exciting affair with many gems to be discovered. (Though it should also be noted that of course also the opposite is possible and not every independent bottling is naturally turning out to become the season’s highlight for connoisseurs). 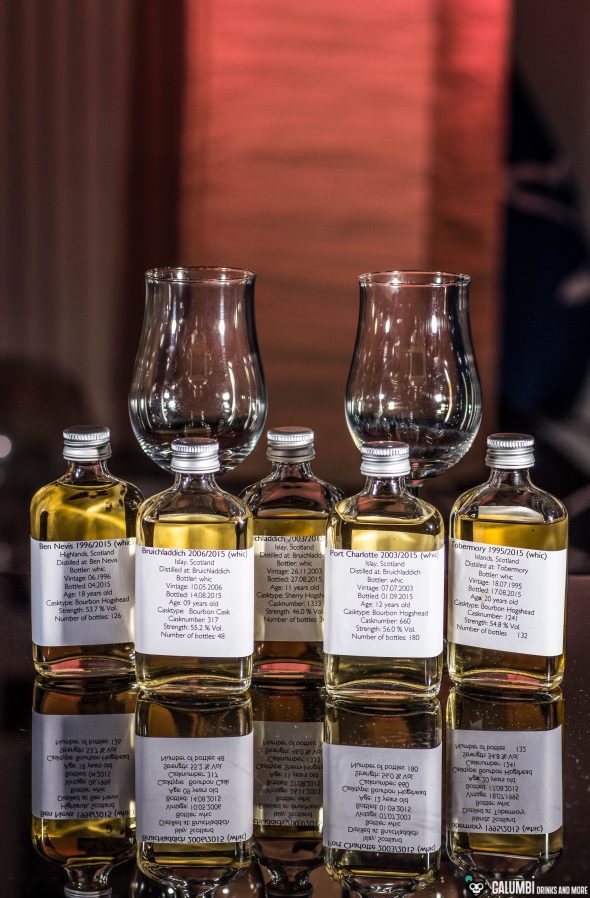 The whiskys I’d like to present here include an 18-year-old Ben Nevis, a 12-year old Port Charlotte, a 9-year old and an 11-year old Bruichladdich and a 20-year old Tobermory. 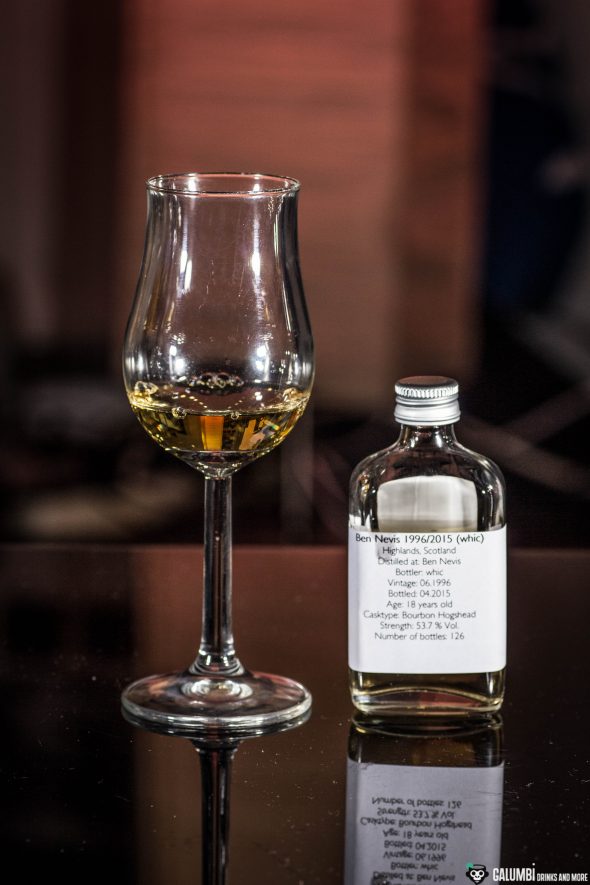 The largest city in the western Highlands is rather unknown outside of Scotland. Few foreigners have heard of Fort William before and even if it is the largest city in the western Highlands, we are talking about a town with around 5000 inhabitants. This place is also home to the Ben Nevis distillery, which owes its name from the largest mountain in Britain that lies in close proximity. Interrupted by several production stoppings, the distillery exists since 1825.

Today’s whisky was distilled there in June 1996 and then filled in a single Hogshead (Hogshead is an old British measuring unit for liquids) made from American white oak which previously was home to American Bourbon Whiskey. The barley malt has not been kiln-dried over peat fires and therefore bears no smoky aromas. The bottling took place in April of 2015. With 53.7% vol. the whisky was probably not diluted any further before the bottling and it was neither chill-filtered nor colored. The retailer additionally indicates that only 126 bottles of this whisky exist and that it is a Single Cask whisky, so logically their won’t be any replenishment. One 0.7l-bottle costs 69.90€ and is not too highly priced for an 18-year-old Ben Nevis whisky. Of course you should know what you’re spending money on when you go for a bottle like this one. 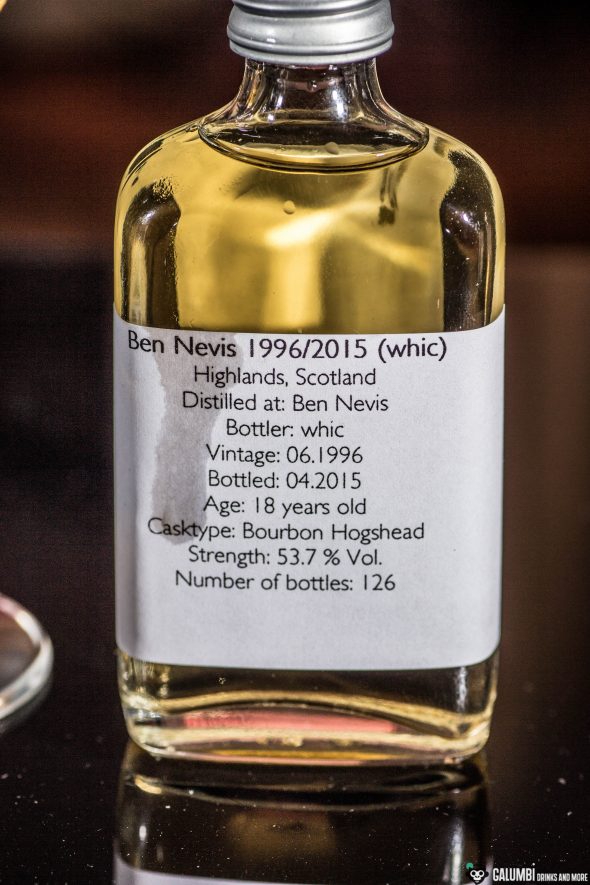 Aroma: Bright, sweet fruits (apricots, peaches and some honey melon), a whopping vanilla with spicy oak and some curd. The addition of water emphasizes the vanilla and teases out a pinch of white pepper, the curd associations are confirmed.

Taste: sweet and intense vanilla and bright fruit (peaches, apricots with sweet curd) with a subtle honey; Water brings more oak, emphasizes the vanilla plus a little cinnamon and malt.

Finish: medium-long and spicy with vanilla and very subtle nuts. – I really like this malt! 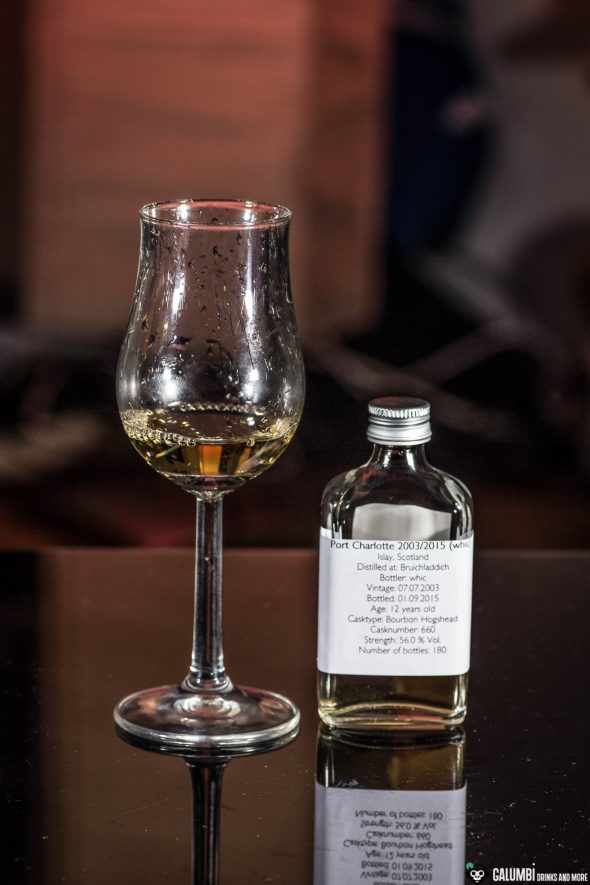 So the Port Charlotte 2003/2015 whisky at least comes up to expectations in one respect: it’s a heavily peated, smoky whisky because the barley malt was kiln-dried over peat smoke thus making it a typical whisky of Islay, which is famous for its smoky whiskys. Also this one is not chill-filtered and has no artificial color added. It is bottled with 56% vol. As the Ben Nevis it has matured in former Bourbon Hogsheads, but for 12 instead of 18 years (from July 2003 to September 2015). The whisky is limited to 180 bottles and costs € 89.90 per bottle. 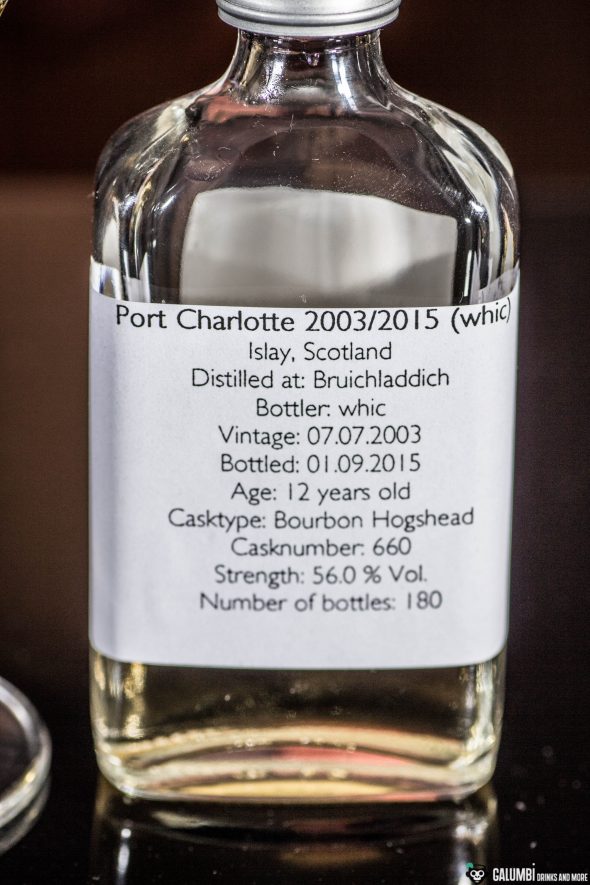 Aroma: Intense smoke like the one from a campfire with ash, smoked eel and a little spicy tobacco. Behind that all there are also some subtle floral notes that become noticeable only after several minutes of scenting.

Taste: A smoky aroma-bomb with lardaceous, smoked ham and some pepper; also a little salt and maritime associations.

Finish: very long and intense – I like it very much. I adore intense smoky malts and this one is a really good one. 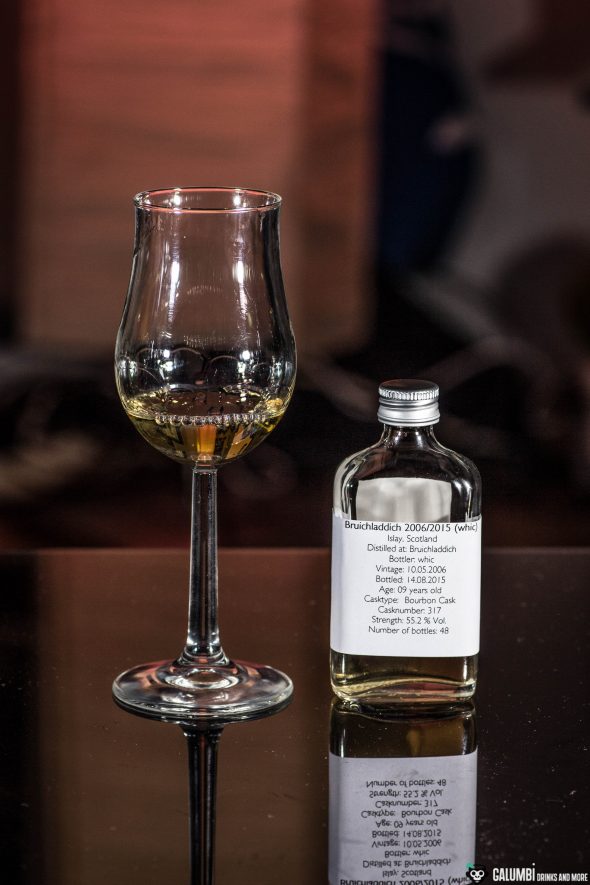 The Bruichladdich distillery also lies on the shores of the Loch Indaal Bay on the Hebridean island of Islay but it is not typical in many ways. Some even call them the Bird of Paradise among the Islay distilleries since a lot of different styles are made there and they use to experiment a lot with different cask maturations. So it is no coincidence that the distillery has given itself the subtitle “progressive Hebridean distillers”. Over many decades the whisky legend Jim McEwan worked for Bruichladdich as Production Director and Master Blender and hat a great influence on the Bruichladdich portfolio before he finally retired last year.

Today’s two bottlings from the Bruichladdich distillery represent that special character in a way since we’re dealing with two different cask maturations and since both of them are not perpetuating the Islay cliché with their non-smoky character. So the somewhat younger of the two was distilled in May 2006 and was then allowed to mature for 9 years until August 2015 in a former bourbon barrel made from American white oak (as Bourbon barrels have to be made of that specific oak wood). With its 55.2% vol. the whisky is available only in limited quantity of 48 bottles. It comes at a steep price with 82.90€ for a nine year old whisky. 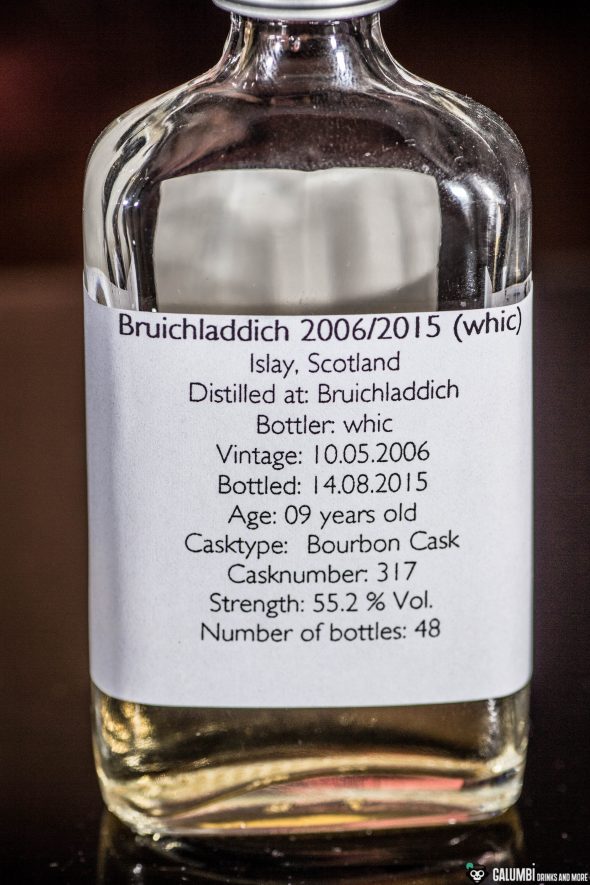 Aroma: Indeed there’s ripe pear, almost with a little sweetness like from a fermentation process, distinct floral notes, a little white pepper and simmered stone fruits (like preparing stewed fruit). With a little water especially the pear and stewed fruit components are emphasized and also some citrus evolves.

Taste: Again there are fruit notes and a very distinct oak character, white pepper and vanilla. Honestly, I can’t find any Rosewater as it is described by the bottler. With a little water the whisky becomes softer with more vanilla and less oak but even more pear.

Finish: medium to long – surprisingly complex for a nine-year-old! 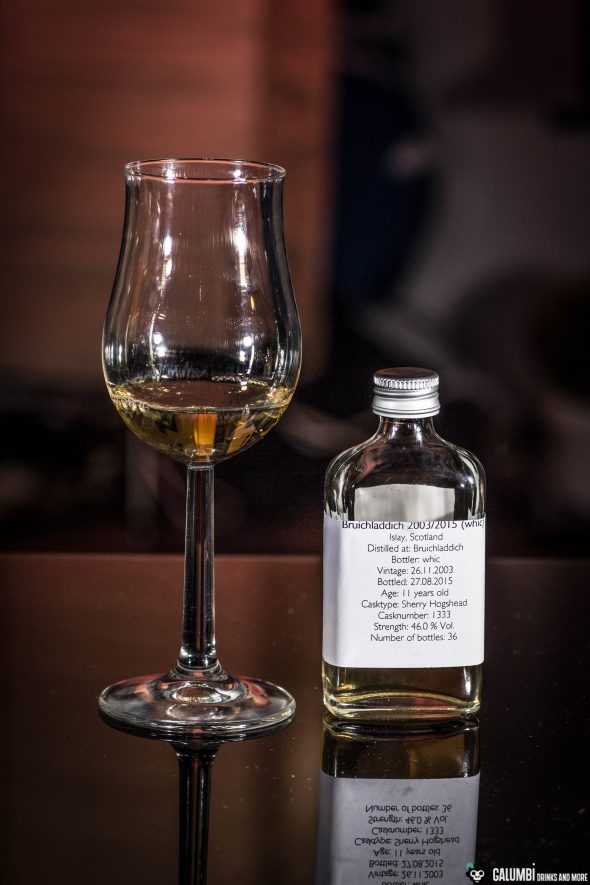 The Bruichladdich 2003/2015, however, has spent some more time in a cask, elven years in total. It was distilled in November 2003 and then bottled in August 2015. However, the cask has been a sherry hogshead from European oak and formerly hosted Spanish sherry (which is actually a fortified wine). So this promises a completely different flavor, which should on the other hand, however, also highlight the peculiar distillery character both whiskys have in common. The whisky comes at 46% vol. and therefore was slightly lowered in its drinking strength to better highlight the sherry notes. Both whiskys are neither colored nor chill-filtered. Only 36 bottles of this one exist. It costs 109.90€ per bottle. Both Bruichladdichs can thus be ascribed to the premium segment. 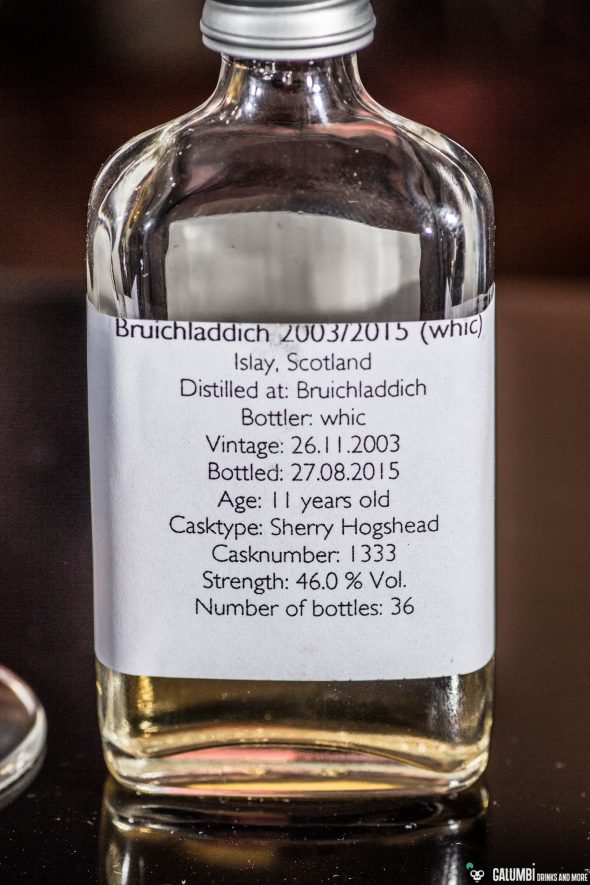 Aroma: on the nose it’s absolutely no typical Sherry Malt. There’s more of a citrus character with lighter fruit notes. The bottler speaks of strawberry jam and I can come to terms with that description, especially since it describes the subtle hints of Sherry quite good. A heavy sweetness and a little oak are also there. The floral notes are similar to the Bruichladdich above.

Taste: Suddenly there is no doubt that you’re dealing with a Sherry Malt: Dark fruits, raisins, a little smoke, a lot of oak and some more strawberry jam. 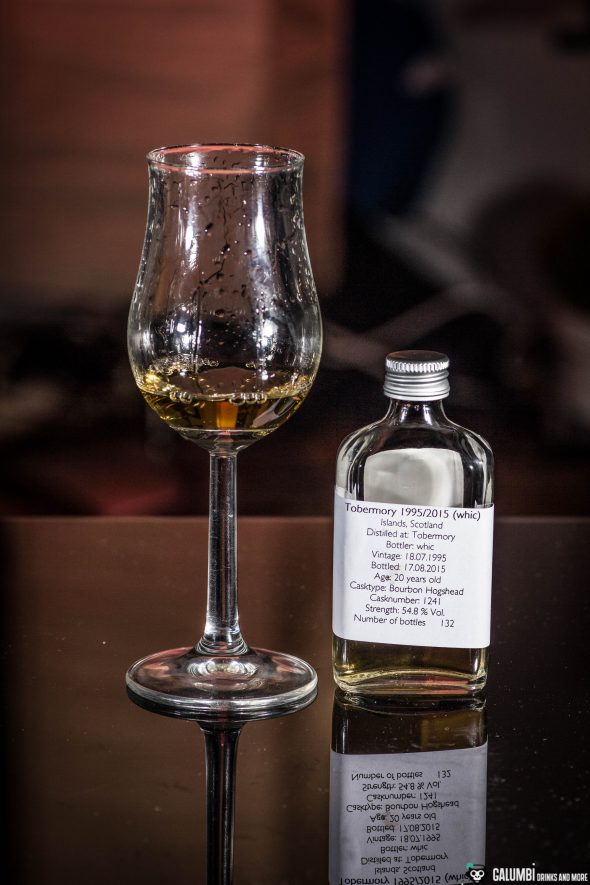 Nominally the oldest whisky of today’s quintet comes from the Tobermory distillery in the city with the same name that lies on the Hebridean island of Mull. Since this distillery was founded in 1798 it has also quite a history but has not been operated for long periods in between. The Tobermory 1995/2015 thus is a classic island Malt (the Hebridean island of Islay on the other hand is a separate whisky region on its own) which often impress with their mild to moderate smokiness alongside maritime notes. And indeed it was made from lightly peated malt or a mixture of peated and non-peated malt. The whisky was distilled in July 1995 (only to illustrate the dimensions: what have you done in July 1995?) and was then finally bottled in August 2015. There are only 132 bottles of this whisky. The Tobermory 1995/2015 is not colored or chill-filtered and comes at cask strength with its 54.8% vol. For this old whisky from former bourbon hogsheads the price of 94.90€ could also have been a higher one. 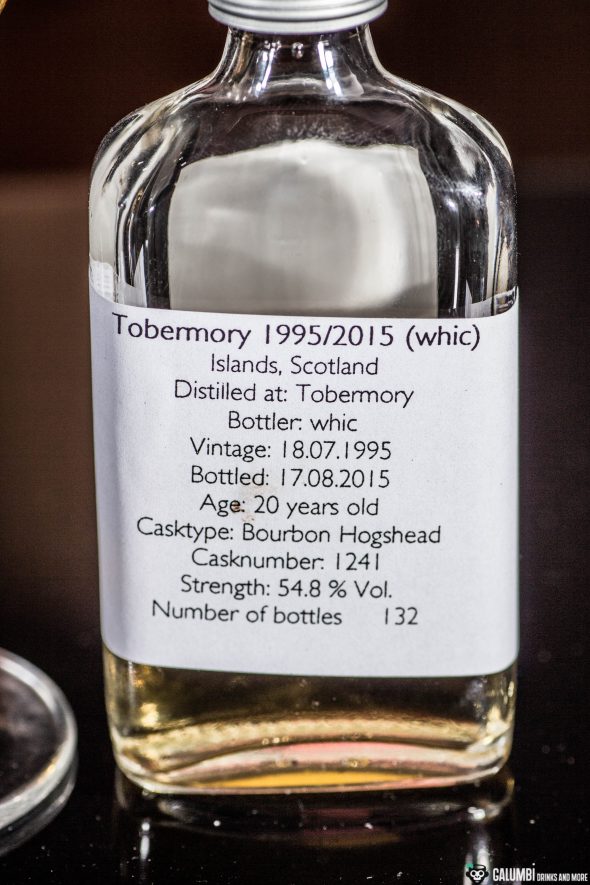 Aroma: First of all there’s actually much oak and some apple. Then there are also deep and spicy notes with a nice sweetness like cherry pie. The moss that is described by the bottler can only be found with a lot of imagination, green tomatoes, however, I cannot find at all. The Malt appears very deep and complex, no wonder at this age.

Taste: Voluminous and spicy with vanilla, oily and maritime tones of seaweed and a salty breeze with a little water mint. I like this one!

Finish: very long and dry. A really nice malt that I liked most of them all.

Buying sources: You can order all of the five Single Malts here (German language).