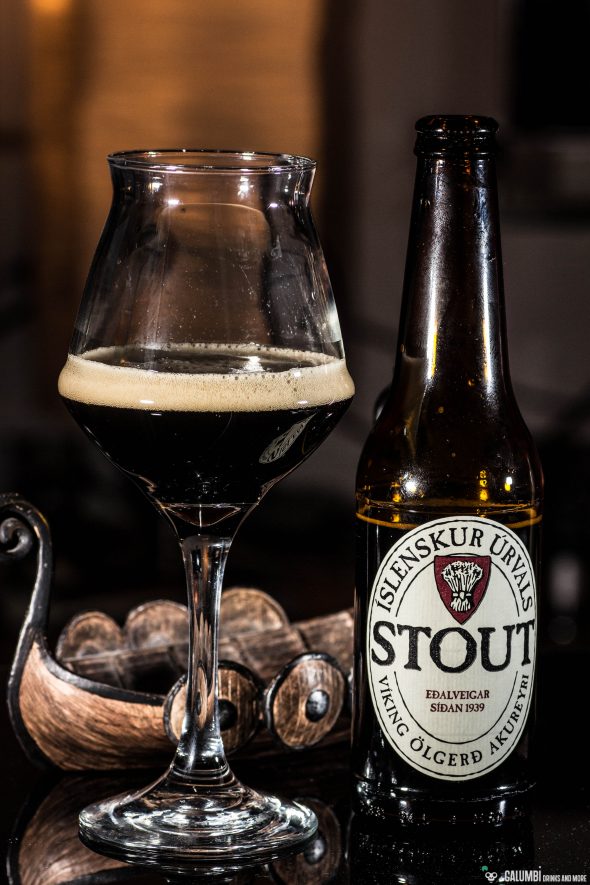 Iceland is currently on everyone’s lips. This is not surprising due to the recent football events, though those events are absolutely surprising if not to say miraculous. No wonder the sympathies for the little underdog are flying in from every corner of the world. And they deserve them, if you ask me.

Icelanders are a very small and very nice folk (sometimes bizarre, though) on a remote island in the North Atlantic. With the exception of some rather trippy fellows in Reykjavik’s nightlife, I did actually meet only very friendly people on my journey there in the past year. So I am even happier for these people and I enjoy watching the cheering crowds in Reykjavik as you can see them on television these days. Therefore, it is time to introduce another beer I greatly valued during my visit in Iceland. It listens to the sonorous name Íslenskur Urvlas Stout and comes from the Viking brewery (Viking Ölgerd) in Akureyri.

Akureyri is located in the north of the island and in a sense it offers a nice anecdote in the light of the current football events. While on the continent you can encounter honking car processions in the cities after the victory of the national team, this indeed happens in Akureyri on every Weekend. That’s right: The young people of Akureyri over the years have cultivated the rite to have honking car processions around the otherwise tranquil town center – completely independent from any football matches or events! A very bizarre but funny phenomenon. Certainly one or the other Íslenskur Urvals Stout will be consumed during those processions (though not by the drivers, I hope). As I’ve already mentioned in connection with the “Vatnajökull – Frozen in Time”-beer, the Icelandic beer tradition is anything but old because only since 1989 beer may be sold there. Given that history, the Íslenskur Urvals Stout is even more delightful. Although with its 5.8% vol. it actually comes in quite stoutly, it turns out to be more of a light weighted Stout. Actually it’s more like a porter, even if this distinction is not entirely correct (but it makes sense here since Porters are usually the lighter beers compared to stouts or “stouted Porters”).

The dark, almost black Íslenskur Urvals Stout builds a nice and seductive brownish foam and it ensnares the nose with slight notes of coffee, roasted malt and some chocolate. Also in terms of taste it is easily identified as a stout, but with a surprisingly fresh, almost gentle touch that makes it very easy to drink and takes off the strong richness which constitutes many stouts. The Íslenskur Urvals Stout is a stout which – although from the far north – may be the right choice during the summer season (only if you want to have a stout during summer, of course).

Buying sources: It will probably be hard to get a bottle of Íslenskur Urvals Stout outside of a beer specialty shop. And even there you have to be lucky to get your hands on it.

One thought on “From the Brew Kettle: Íslenskur Urvals Stout”