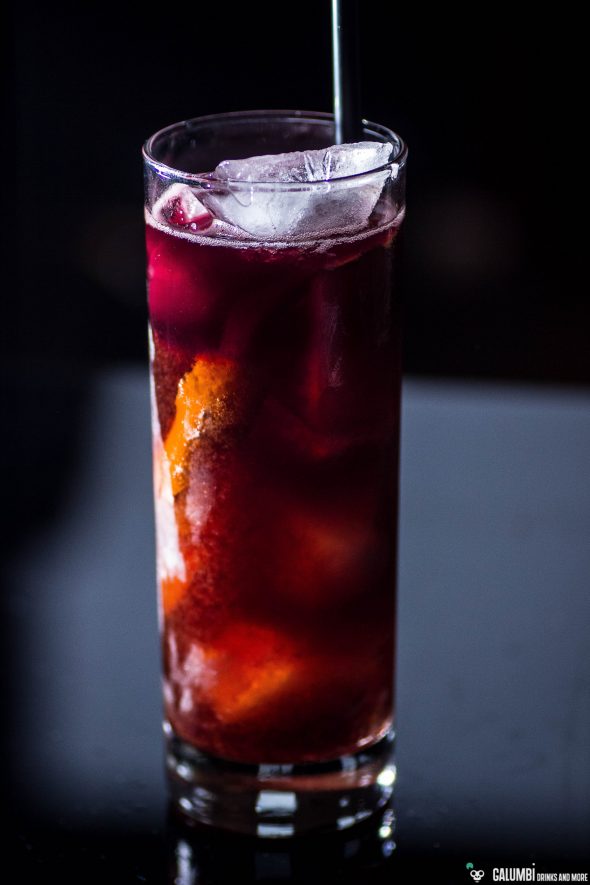 It was more than two years ago when I first took notice of today’s cocktail while reading an article on the website of German Mixology magazine. Of course this also had a lot to do with the very bizarre name of the drink I encountered in the article’s headline (the name translates into something like “Don’t fuck with the rocketman”). But there’s an absolutely brilliant cocktail hiding behind that ludicrous name.

Personally, I am a very big fan of the New York Sour. That composition of rye whiskey and dry red wine contributes to a very aromatic and complex drink. And exactly the same principle can also be found inside of the „Fickt nicht mit dem Raketenmensch“: Bourbon whiskey is combined with Lambrusco and a balsamic reduction in combination with strawberry jam. Additional flavor depth comes from adding some walnut liqueur (such as Nocello) and Angostura bitters. What may sound a little curious at first glance is something that surely is quite common to people visiting restaurants on a regular basis. The combination of strawberries with a balsamic reduction can be encountered on many menus and has become something like a modern classic. So why not rely on the same composition inside of a drink? This may have been what Phoebe Esmon from the now-closed Emmanuelle Bar in Philadelphia thought when she decided to put today’s cocktail on the menu.

Anyway, there’s still the question what’s that name all about, so I will try to briefly provide some enlightenment on this: The name is a quote from the 2nd World War-novel “Gravity’s Rainbow” by Thomas Pynchon (1973). In the novel there’s a soldier in London who is faced with mysterious erections whenever German V2 rockets strike the ground. This may sound very bizarre and trashy but the novel is generally received as a very complex (and also reputable) contribution to modern literature. The Time magazine even called the novel one of the 100 best English-language novels between 1923 and 2005.

Unfortunately I could not figure out what has been the exact name of the cocktail in the Emmanuelle Bar. However, I came across several sources suggesting that the cocktail actually was sold in Philadelphia with the name in German language. I really don’t know why, maybe as an allusion to the German V2 rockets (or because “Raketenman” is one of those beautifully trashy German-sounding words).

Balsamic reduction: Simply heat equal parts of balsamic vinegar and sugar in a pan and simmer until the sugar has dissolved and the liquid is slightly reduced. Then leave to cool and pour into bottles if you want to store some of it.

Preparation: Mix all ingredients except for the Lambrusco and shake vigorously on ice. Then strain into your glass filled with ice cubes. Last add an orange zest and top off with Lambrusco.

Buying sources: You will probably find all the required ingredients in well-stocked supermarkets. Alternatively you’ll have to visit specialized stores or consider ordering online.