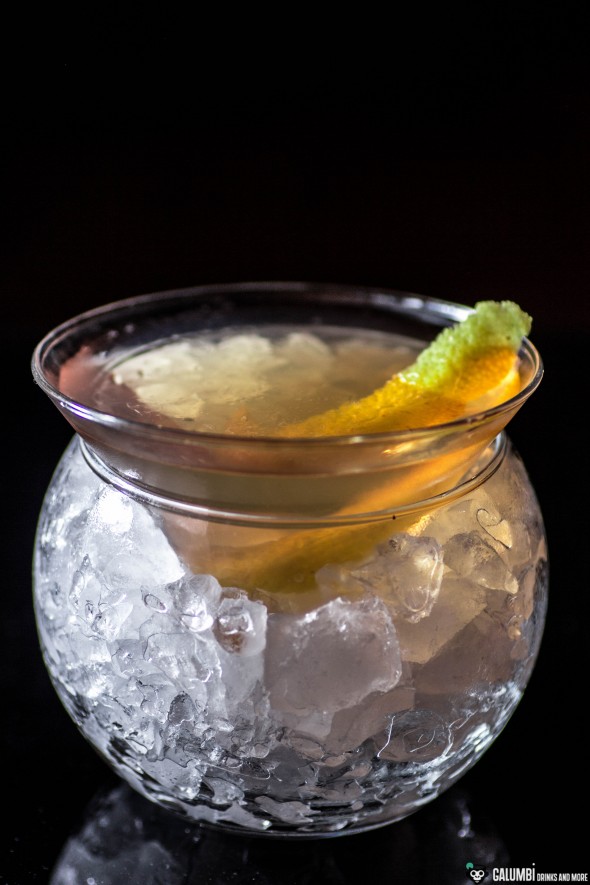 Actually one should expect the classic Martini Cocktail to be one of the first drinks to be written about on a cocktail blog. After all, it is considered to be the cocktail of the 20th century and for many it is the epitome of cocktails in general. But I have not been in the right mood for such an article until today. Instead, I prefer to dedicate myself to a close relative.

The Merry Widow Cocktail is certainly a complex and more convoluted tribute to the Martini Cocktail, but it definitely adds a lot of accents on its own. In addition to gin and vermouth, this very interesting recipe features Benedictine (which I like a lot), a little absinthe and also a Dash of Peychaud Bitters. As it happens, the merry widow is more of something like a crossover drink somewhere between the Martini and a Sazerac. Especially the latter proves the incredible flavor potential which can be reached when combining a little absinthe together with the wholly aromatic Peychaud Bitters. Moreover, it is quite possible that the name of the drink also bears a small reminiscence to the Widow’s Kiss cocktail that was mentioned for the first time by George J. Kappeler in 1895 since Benedictine also plays a central role in the Widow’s Kiss (albeit in combination with other ingredients). More likely, however, the name is an analogy to the operetta “The Merry Widow” by Austro-Hungarian composer Franz Lehár, which was first performed in Vienna in 1905 and gained great popularity in the following years. This thesis is especially likely to describe the truth when having a closer look on the first mention of the Merry Widow: The drink is one of the recipes inside Hugo R. Ensslin “Recipes for Mixed Drinks” from 1916. However, it is assumed that it was not invented by Ensslin, but has already been a common Martini variant by that time.

A lot of vermouth and the addition of absinthe and liqueurs make this drink unmistakably recognizable as a pre-Prohibition cocktail. The experience of taste is really recommendable! It offers an herbal (somewhat earthy) freshness with a warm sweetness and distinctive anise notes – without drifting in the direction of a more heavy liqueur cocktail like for example the Widow’s Kiss (though I love this drink). So if you’re up for an interesting and innovative classic: the Merry Widow could be your drink for the night!

Preparation: Stir all ingredients on ice in a mixing glass until cold. Then strain into a pre-chilled glass and spray the oil of a lemon zest on the surface of the drink.

Buying sources: Except the Peychaud Bitters (specialist retailer) you should find the necessary ingredients in well-stocked supermarkets.